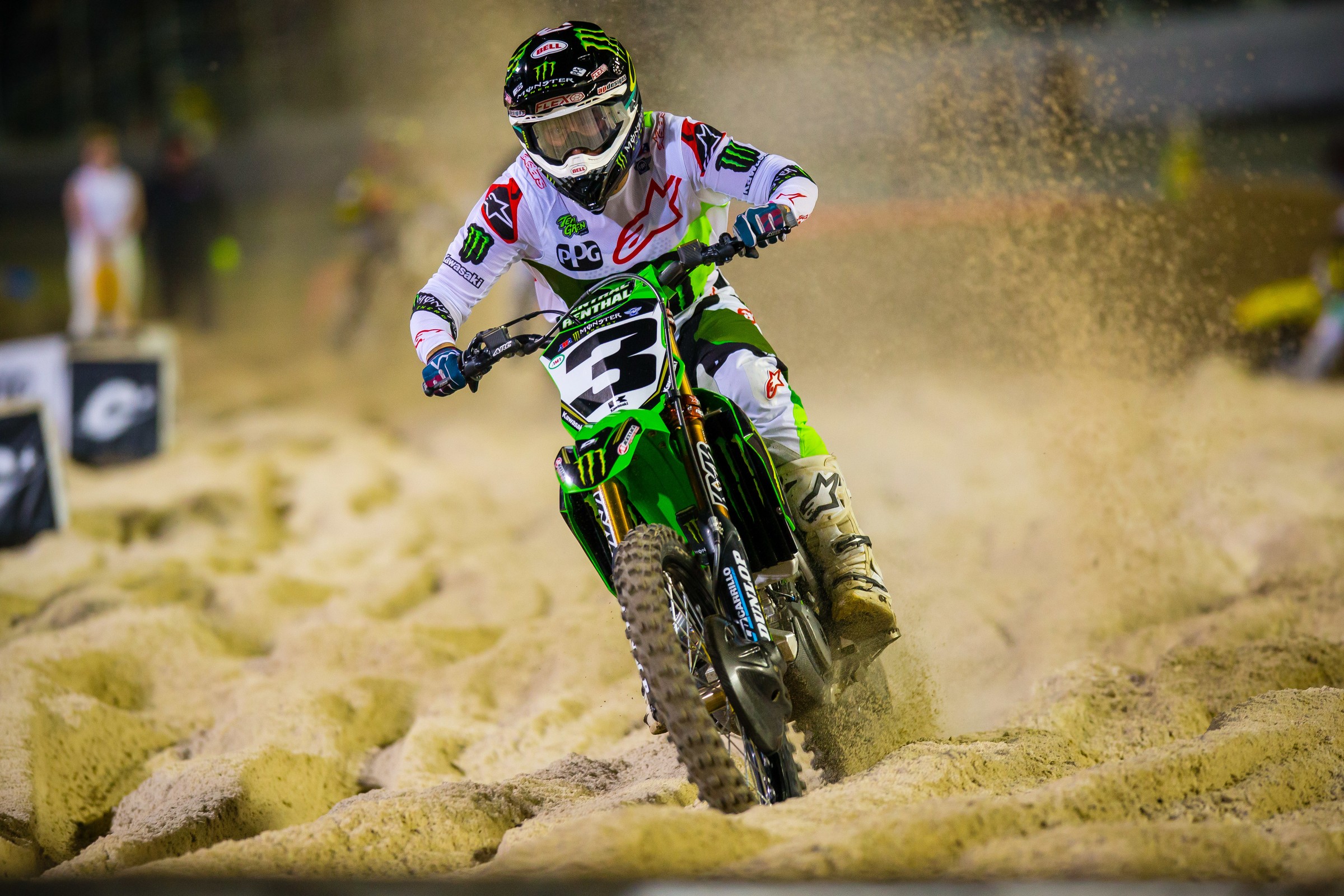 Redux News and Notes From Daytona

Place finish for Ken Roczen in Daytona after going down off the start. It’s the first finish outside the top five for Roczen in 2019.

Place finish for Justin Hill in Daytona. It’s the first top-10 on the season for the 450SX rookie.

Riders in 450SX that have finished inside the top five in every race through 10 rounds.

Place finish for Chase Sexton on Saturday, a season-best for the GEICO Honda rider.

Time between 250SX main events for Ryan Sipes, who returned to supercross in Daytona. Sipes finished 14th on the night.

Days between 450SX main events for Shane McElrath, who finished 12th on his 250F at Daytona. McElrath raced 450SX in East Rutherford in 2015 where he finished 11th.

“It’s nice to be back in Daytona, especially since it was close enough to drive to and have somewhat of a hometown crowd come out and support me. I felt comfortable all night and our speed and consistency has been showing every weekend. The unique track layout here really emphasized our strengths, so I’m feeling pretty good. I’m pumped on a top-5 finish and to earn some more points.”

“Daytona was good to me this year. Sixth-place, that’s my best finish so far. I had some good times in qualifying and I’m starting to find my feet in this class and starting to kind of flow and know my place a little bit. This is something that I can definitely build from and move forward from. It’s been a rough, tough start to the season with an injury before the season and obviously trying to get back at it has been a tough deal but I’m still here, still plugging away, and I know the work that I’m doing during the week will pay off soon and it’s going to be good.”

“I’m definitely disappointed in tonight’s result; it’s my worst of the season. I think for the most part the day went well, and I was feeling really good on the bike. Unfortunately, in the main event, there was a pileup in the first turn and I got caught between my bike and Cole’s and couldn’t get up. Once I was up, I did my best to make up as many positions as I could during the race, making my way into eighth—not what I wanted and we’re now also down in the points standings, but there are still seven rounds to go. I’m going to set my eyes forward and bounce back in Indianapolis.”

“This weekend was okay. I feel like my riding was really good in the heat race and then the Main Event was looking like it would be off to a great start but then I got roosted in the sand section, I couldn’t see and I went right into a tuf block and fell. After that, I was in dead last and was able to come back to 11th. It’s obviously a huge disappointment on the result but onto next weekend.”

“The first turn was a really weird setup in my opinion. It reminded me a lot of the GPs, where everyone just lines up to the inside and then files to the outside. We all went into the second turn and I tried to tuck underneath Kenny and Cooper [Webb], but Chad [Reed] came across into Ken, which then pushed him into me. I was actually trying to get Kenny up because the first thing I thought of was him getting burned by my header on the right side, plus obviously I needed to get up too. He got up and going pretty quick but my bike was buried so it took me a minute to get going. It was just super-unfortunate. I’m struggling right now and it’s tough to have so many bad-luck weekends and not get the results that I know I can and should have. I’ve just got to shake this one off too and put my mind forward.”

“The night was actually really good for me considering how last weekend went. So I’m stoked to walk away healthy, safe and keep it on two wheels. My bike worked amazing all day and night. I can’t thank the Star Racing Yamaha guys enough for all the work they do in and out each week. The track was a difficult Daytona; gnarly, brutal and really demanding, but my fitness was good tonight and I’m happy with my finish.”

“I’m going to take the positives from Daytona. It felt good to get the holeshot and lead for a few laps in the main. My arms locked up after I got passed, so I didn’t put in my best riding after that. I’m going to keep starting up front and try to lead longer until we are winning.”

“The Heat race was an amazing experience for me! I got off to a good start and a couple guys made mistakes and I got into the lead. I led for a lap or so and ended up finishing second in front of my hometown crowd, so that was a really good feeling. In the Main, my start was decent but unfortunately, I got tangled up with a rider and fell on the first lap. I came back and salvaged 11th. Overall, we made a big step in the right direction, I feel like we’re getting faster each week and I look forward to Indianapolis for sure.”

Honda HRC’s Cole Seely will not be leaving Florida following the Daytona Supercross to return home to California. Seely, who has split time between his home base in California and Florida the last few years, will spend the remainder of the Monster Energy AMA Supercross season training in the Sunshine State alongside teammate Ken Roczen and more at the Moto Sandbox.

“I’ve actually had an apartment here in Florida since November,” Seely explained in a Honda HRC press release. “It’s been pretty empty since then except for a pre-season test we did and then this past week for Daytona testing, but I’m heading back there now pretty much full-time until the end of the season. I’ll be between Florida and California depending on where the races are, but I’ll be riding at the Moto Sandbox, which is just an awesome place because of the tracks available, and I’ll be riding with guys like Kenny [Roczen], Chase [Sexton], Adam [Cianciarulo], and Alex [Martin]. It gets boring riding by yourself in California, so to have such high-level guys to ride with and push you during the week is going to be great.”

French rider Cedric Soubeyras went down hard off the start of the 450 LCQ on Saturday in Daytona. According to an Instagram post, he went to the hospital to get checked out where it was determined he did not break anything. His status for Indianapolis this weekend is still up in the air.

“DAYTONA to HOSPITAL—— I’m ok ! — ?? Big crash at the LCQ start, I feel sore but I got nothing broken. Thanks for your support. I don’t know yet if I will be able to race Indianapolis,” he wrote in his post.

Josh Cartwright and Lane Shaw were involved in a scary crash on the start of the 250 LCQ. Both riders were able to get up and Cartwright even lined back up after the red flag after being cleared by the Alpinestars Mobile Medical team. Unfortunately, he went down again and did not finish.

Cartwright wrote on Instagram that he will get checked out this week and hopes to race this weekend: “This weekend did not go as planned. I felt great in the heat race until I tucked the front in the sand and fell out of a transfer spot. Then come the LCQ, I was clipped off the start and it all went downhill from there. I flipped over the bars onto the concrete on my back. I am going to go get checked out tomorrow. As long as everything is good, we will be lining up for Indianapolis!”

Shaw said he expects to be racing this weekend: “Last night was....Wild! Well Nobody said it was going to be Easy.... The man above was watching over me??Just want to say thank you to everyone who reached out to Check on me, I really appreciate it?? I’ll see everyone in INDY.”

Send of the Weekend, Part I

Send of the Weekend, Part II