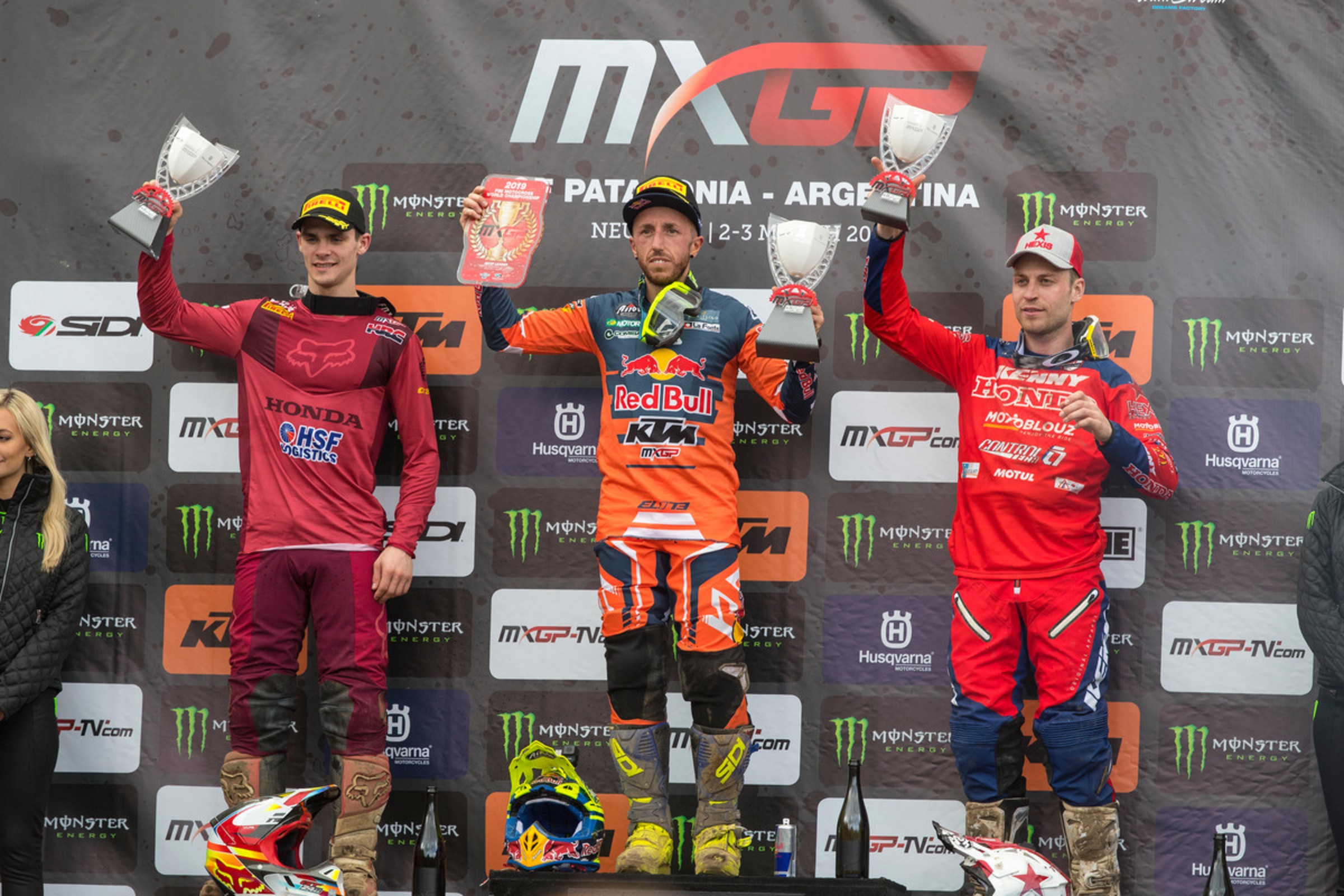 GP Report 3 Things We Learned at MXGP of Argentina

MXGP laid rubber on the metal start gate for the first time in 2019 with a visit to the fast flow of Neuquen in the depths of Patagonia-Argentina. Most of the teams made the 6,000-mile hike from central Europe for the fifth year in a row and for the second time to open the season. The mild temperatures close to the Chilean border ensured pleasant racing conditions compared to the variance of climate back in Europe.

Here are some of the talking points and observations from the first Grand Prix of 19.

It was a day of brilliance from Red Bull KTM’s Tony Cairoli, who cranked his career total of Grand Prix wins up to 86 (just 15 from making history as the most ever) and at the age of 33, 12 years older than Tim Gajser who was second overall in Argentina. The nine-time world champion was even better than his strong showing at Neuquen in 2018 and this confident 1-1 was his first success at the fast, flowing, and occasionally treacherous course.

Why was this an improvement? After all, Cairoli did not have his Red Bull KTM teammate to worry about. The Sicilian did have to deal with Honda HRC’s Tim Gajser (fit for the season opener for the first time in two years and twice a winner at the venue) and a resurgent Monster Energy Yamaha’s Romain Febvre who’d been training and working with Jacky Vimond and using a different strategy for his fifth MXGP term. Tony also had to set-off from 28th place in the start gate on both occasions thanks to a rare technical glitch on the works 450 SX-F in Saturday’s qualification race. Despite eventual evidence to the contrary, Cairoli seemed slightly worried about the starts; particularly at a track that he doesn't rank as one of his preferred, that favours speed and bravery over technique and interpretation and where the lap times are so close. Cairoli brushed aside the disadvantage and his first moto getaway and seizure of the lead by the end of the first lap was nothing short of stunning.

In the second moto he rose from third place to deal with Gajser (who admitted he was “sore” after a hefty Saturday get-off) and Febvre (who lost the overall podium in a high-side through the waves that required medical attention on his right ankle/foot) in one swoop. Gone were the memories of several small mistakes and missteps from 2018 where he lost first place and the Grand Prix to a rampant Jeffrey Herlings on the last lap. Considering the pre-race adversity and the appreciation from the crowd Cairoli duly celebrated his achievement with some vigour.

“I always show emotion, especially in a country like this that is very ‘warm’ and the fans that cheer for me,” he said. “I was close last year. It is always nice to race where people don't see you often…”

At the other end of the scale in terms of age and experience was teammate and protégé Jorge Prado who breezed through MX2. The 18-year-old, in just his third GP year, started his title defence in foreboding fashion with little rival for his starts, speed, or relentless pace. The Spaniard was not getting carried away with his form and spoils however and the words of caution and priorities for health and points sounded like they came straight out of the humble Cairoli’s media handbook. Rockstar Energy Husqvarna’s Thomas Kjer Olsen was— and looks to be—Prado’s closest threat but 2019 could quickly evolve into a staid routine if the Dane cannot hike his starts to match his rival. His miscue in the first moto was only saved with some excellent moves on the FC 250 to rise back to second spot.

Not since Stefan Everts retired at the end of 2006 has the premier class missed a defending champion in the gate for a new season. The 2007 season marked the beginning of a fresh dawn with the all-conquering Belgian out of the picture and the next two years of MXGP (then MX1) saw the title chase go down to the final race and with stories of injuries (Josh Coppins’ heart-breaking shoulder problem), landmarks (Steve Ramon taking Suzuki’s last title in ’07), and emotion (David Philippaerts last-round-last-race success making him the first Italian winner in the premier division).

The same sense of “discovery” and “novelty” that hung around these campaigns more than 10 years ago was not as strong for 2019, but such was Jeffrey Herlings’ grip on the contest in 2018 that there was a feeling of relief in Argentina. Herlings (who claimed 17 wins from 19 appearances last year) was out of action and not even out of a protective cast on his right foot, which meant there would be a different victor in MXGP for the first time since June 2018. With the Dutchman in injury-limbo in terms of a return to racing there was also the distant thought that the first steps for another champion were being taken through the Neuquen soil.

In the end Cairoli’s acumen ensured that Red Bull KTM reinforced their status quo as top dogs and #222 was again in a very familiar position. The Italian fired back from injury-hit years in 2015 and 2016 to win MXGP again in 2017. He could be in line for another resurrection after the toughest campaign of his career versus Herlings in ’18. If his teammate misses too many rounds and the championship is effectively out of reach for Herlings, then Cairoli could not ask for a stronger companion in the awning to help protect his surge towards a potential eighth crown for KTM since 2010.

Argentina was the first round, so something always turns up. Headline maker in this respect was Mitchell Evans, who announced himself as the latest Aussie sensation to watch. The Queenslander was the standout rookie performer in the 2018 Aussie national series and has taken-on Hunter Lawrence’s vacant Honda 114 Motorsports CRF. Two good starts helped the debutant’s progress at Neuquen and for an eye-widening baptism featuring a podium finish.

“I never raced on a track with such high speed before,” he said. “I couldn't be any happier and I didn't know what to expect. I loved every minute of it.”

In MXGP Jeremy Van Horebeek was a surprise visitor to the podium for the first time since 2017. He was one of the riders left without employment and without much hope to continue in MXGP last autumn. The Belgian had spent five years with Yamaha and never reached the heights of his first term in 2014 (where he was the sole representative for the brand in the class). Given a lifeline by the small Honda SR Motoblouz crew, JVH appeared to be reenergised in Argentina, relishing the role of underdog and the position of being able to prove his critics wrong. Taking third place on what is effectively a privateer effort (and with just two weeks of preparation having previously set-up up the stock CRF450R to compete at the Le Touquet Beach race) showed that the former Motocross of Nations winner still has something potent for the MXGP class. The lack of trimmings provided by a factory team could allow the 29-year-old racer to re-focus and trouble the podium disputes once more.

The battle of the nine satellite KTMs in the series was won by Shaun Simpson (eighth) but the Saturday pace of Max Nagl and Max Anstie showed that this will be an interesting sub-plot through the year. Anstie and Nagl were victims of a technical glitch and a popped knee (Anstie going on to take a decent fourth in the second moto) while RedBud MX of Nations star Glenn Coldenhoff bagged just seven points, as he’s only been riding a few weeks after a back/neck injury.

There was a horrible sense of déjà vu for Monster Energy Yamaha’s Arnaud Tonus when the Swiss barrelled into the ground and out of the first moto. Thankfully #4 reversed his horrible fortunes with injury (he missed the entire 2018 season) by making the gate for the second moto and collected a top ten finish. Another top 10 runner was Rockstar Energy IceOne Husqvarna’s Pauls Jonass. The Latvian had won the previous two editions of the MX2 Grand Prix at Neuquen and made a late call on his MXGP debut this time after making a late recovery from right ACL surgery. Missing bike time, Jonass’ solid 10th place was a pleasing and encouraging first run on the FC 450.

Bike It DRT Kawasaki’s Darian Sanayei was attempting his first Grand Prix since leaving the 2018 MX2 story after the British round last summer. His second position in timed practice hinted at potential for the motos but a DNF on Saturday placed him last in the gate (he could only reach 12th in the first sprint) and another retirement in the second race capped a disappointing weekend.

Matterley Basin is next, on March 24, which means running the early spring gauntlet of weather in the UK.