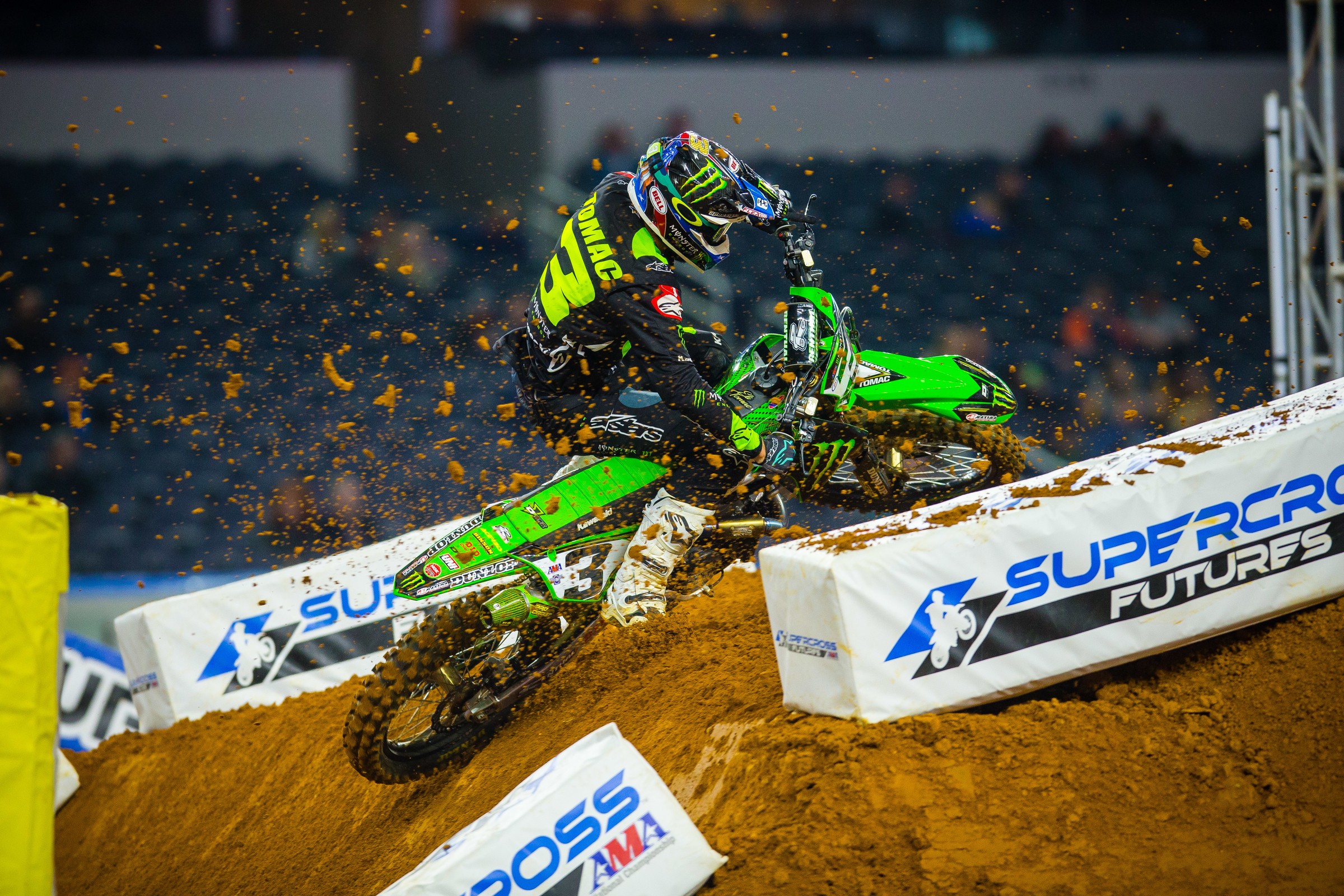 The season hasn’t started out in typical fashion for Eli Tomac. Not only has he won just one race in seven tries, he was in the thick of the points battle right from the start. In the past it’s been the opposite—he’s won plenty of races but has also faced large point deficits early. But now, thanks to finishing 12th in Arlington, he’s 16 points back of championship leader Cooper Webb. We’re still waiting for Tomac to string a few wins together. Now that he’s back in familiar territory will it happen? –Aaron Hansel

The main events won’t be the normal 20-minute (15 for the 250SX) plus one lap length this weekend. Instead, fans in Detroit will get to see each class square off three separate times in this weekend’s Triple Crown format. Tomac won two of last year’s three Triple Crown events (Jason Anderson won one), but a reenergized Webb won the only Triple Crown race we’ve seen so far in 2019. It should be interesting to see how it all plays out in Detroit. –Hansel

Last time Webb had the points lead his time with the red plates was brief. After leaving Oakland with it he lost it in an absolute mud bath of a race in San Diego. Of course, weather won’t be an issue this time around, as the race will take place under the protective roof of Ford Field. Webb will face two realistic threats to his championship lead, and they’ll come from Ken Roczen (two points back) and Marvin Musquin (six points back). We’ll see if he extends his lead in the dry conditions or bids goodbye to the red plate for the second time in 2019. –Hansel

What Could Have Been

Chase Sexton took third place in Arlington, but it could have been so much better for the GEICO Honda rider. He set the fastest lap of the 250SX East Region main, and even found himself catching race leader Austin Forkner at one point. Unfortunately for Sexton, he stalled his machine once and crashed once. The end result was third behind Forkner and Justin Cooper, and while a podium finish is great, a win would have been so much sweeter, especially since Sexton has yet to get one. Think he’ll make it happen in Detroit? –Hansel

Jordon Smith has got to be wondering when his first drama free race will unfold. At the opener his mechanic, Kristian Ortiz, had to change a flat tire on the line just seconds before the main event gate dropped, and last week in Arlington, Smith had second place wrapped up before going down all by himself late in the race and giving up two spots. Smith has the skills to get it done and his lap times have been on point, so don’t be surprised if it all comes together for him at the third round of the 250SX East Region. -Hansel

Monster Energy/Pro Circuit Kawasaki’s Austin Forkner has been perfect to start the 250SX East Region. He’s qualified fastest at the opening two rounds, won his heat races, and has led EVERY SINGLE LAP of the 250SX East main events. Forkner has had his rough moments in qualifying, but he’s been a model of consistency once the sun goes down. Will his perfect start to the season continue this weekend? -Chase Stallo

It’s gone relatively unnoticed with all the drama up front, but Blake Baggett has been rock solid to start the season. He’s already locked up his first career win (Glendale), finished on the podium in Oakland, was in line for another podium in Minneapolis before crashing late, and finished a solid fourth last weekend. Since entering 450SX in 2016, Baggett has steadily improved each year. Is his best stuff still to come? -Stallo

It’s not that Martin Davalos has been bad through the opening two rounds, it’s just that we haven’t seen that blazing speed we’re used to seeing out of the veteran. After getting taken out by Alex Martin in the opener, Davalos bounced back with a fifth last weekend, but finished 16 seconds back of Forkner. We’ll see if Marty can take advantage of the Triple Crown format and uncork some of the speed we’re accustomed to. -Stallo

Since beginning the season with 8-5 finishes, Marvin Musquin has reeled off five straight podium finishes—the most in the class over the last five rounds. Marvin started slow due to an off-season knee injury, but he’s getting back to form. Further, as we hit what’s expected to be a technical, rutty track this weekend, it could be the perfect opportunity to grab his first win of the season. -Stallo

Not many predicted that Joey Savatgy would be head of the rookie class this year, but the Monster Energy Kawasaki rider has been downright impressive the last few weeks, and is closing in on his first career 450SX podium. Savatgy told us after last weekend a big adjustment has been the track. “It’s hard to explain it to somebody, but I used to think the 250 track was kind of gnarly. Obviously because that’s what you’re used to, but it’s a whole other deal when you get to this class. A lot of this respect to the dudes up front. At the end of the day, I think that’s the biggest thing between that [250] class and here.” Can Savatgy snag a podium this weekend? -Stallo