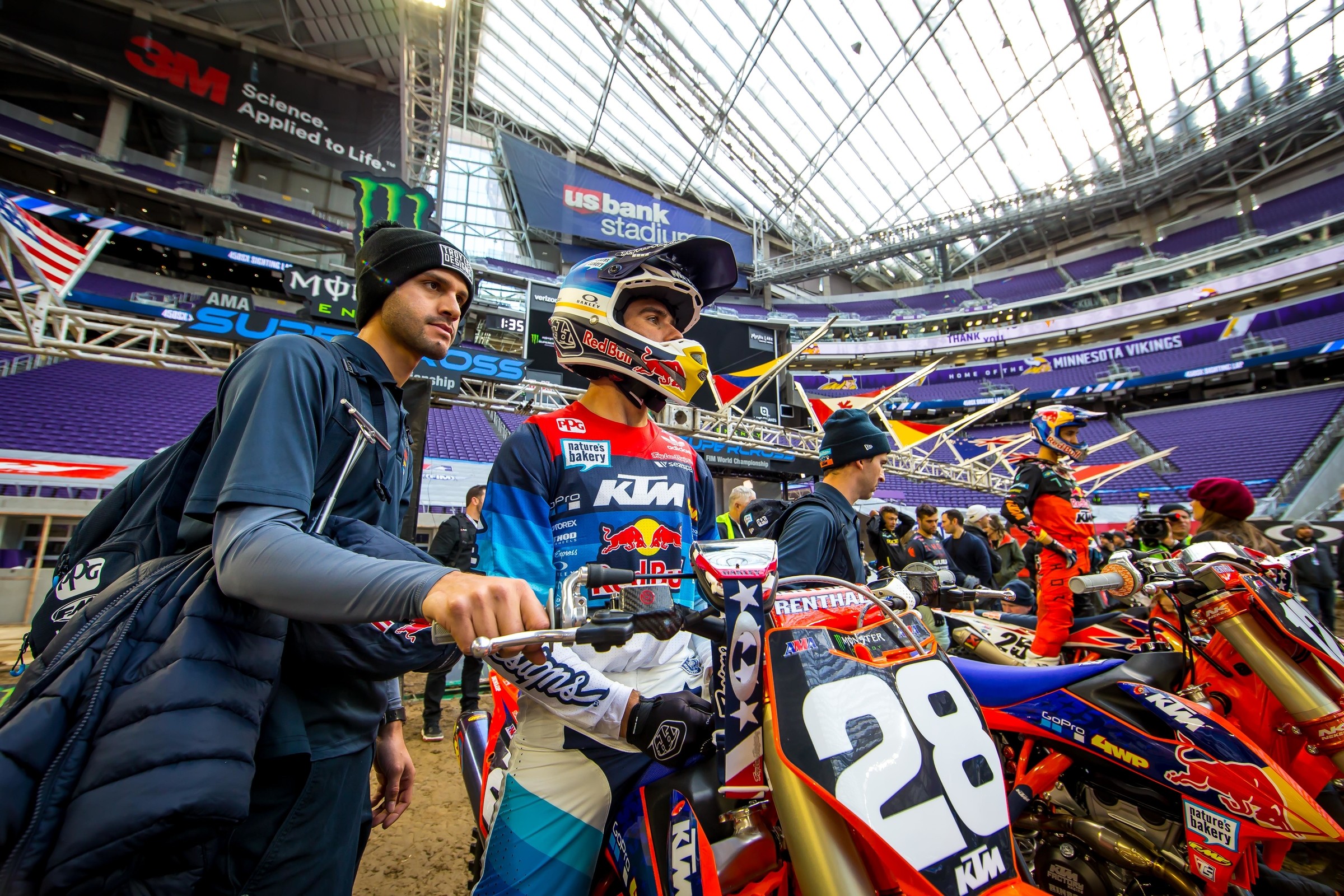 Jordon Smith took second last week at the 250SX East Region opener in Minneapolis. No surprise there, Smith is a top-shelf contender who's won races and fought for titles in the past. What was unexpected was the flat tire Smith sustained on the parade lap just moments before the gate was scheduled to drop.

“I had no idea!” Smith told us. “I went to the bathroom and I came back, and I saw Mitchell [Falk’s] mechanic just scrambling, so I thought it was something with Mitchell’s bike, so I just walked back all leisurely. And Kristian is like ‘Hold your bike! Hold your bike!’ And I’m like ‘What for? Flat tire?’ And he’s like, ‘Just hold your bike!’ I had asked the starter how long we had before I went to the bathroom, and he said three minutes. But [by now] they had already started the bikes up, and they hadn’t even gotten the nut off of the axle. So at that point I started stressing pretty hard. Yeah, Kristian did a great job just keeping his composure and getting it done. Just a flawless wheel change.

“We got my holeshot device locked in with about eight seconds to go, and Kristian peaced out. I took one breath and then the card was sideways, so I put it in gear. I cleared my mind good enough for the start, and then when I got to the first turn, then it all started coming back to me! It took me a few laps, maybe three laps, to get my feet under me. Yeah, it was crazy.”

Smith went on to take a solid second in the main event. We spoke with Ortiz to get his take on averting disaster and helping put Smith on the box in Minneapolis.

Racer X: What was going through your mind when Jordon Smith came rolling back to the line with a flat tire after the parade lap?
Kristian Ortiz: Usually when he comes back from the parade lap he uses the bathroom. He’ll hand the bike off to me and I’ll get things straightened out for him for when he comes back. It was no different in Minneapolis than any other time he comes back, but when I went to lift the rear of the bike up to straighten it out on the grate I noticed the tire felt soft. I kind of ran through all the scenarios in my head, wondering if it was really flat, or if that’s just how it felt. I didn’t want to make a rash decision because there obviously wasn’t that much time. I pressed on it a few times and thought, “Well, he can go out and come back in on lap five with a flat and we’ll have to change it then. Maybe he’ll finish 10th. Or if I change it here on the line, maybe we’ll miss the gate drop. Who knows what happens then?” So I just ran through everything and made the decision to change it. It was the best thing we could do to give him the best chance to have a good night.

So he didn’t even know the tire was flat?
No, he didn’t know.

This will get your heart rate going. Excellent work here by @kortiz108 under pressure. ? @supercrosslive

What did he do when he came out of the bathroom and you guys were ripping his wheel off?
While he was in the bathroom I got on the radio and asked for Wayne Lumgair, our crew chief. A couple seconds went by and there was no answer. I asked for him again, and again no answer. By that time Jordon was coming back, and when he got to me I yelled, “Hold your bike!” He was like, “What’s wrong?” I said, “Just hold your bike!” Time was running out at that point.

How much time was there?
The 30 second board wasn’t up yet but it was pretty close. There was probably another 10 to 15 seconds before it went up.

So maybe a minute at the absolute most?
Yeah, maybe a minute at the most. After I’d yelled at him to grab the bike I ran to my backpack to get a wrench to start to loosen the rear axle. At that point Tyler Keefe, our team manager, was on the radio. I’d yelled because obviously the radio wasn’t working. I’d yelled toward Wayne and he still didn’t really hear me. At that point the other mechanic ran down and told him I needed help. It was pretty frantic. He [Lumgair] ran toward me at first with nothing in his hands, and I yelled at him that I needed a rear tire. He eventually showed up with the rear tire and the tools and I just went to work and did it.

So at this point are you stressing about not getting it done? Obviously you’ve changed more wheels than you can count, but there isn’t much time left either.
When he got to me with the tools and the tire, they started their bikes up right then at that moment. I hadn’t even started taking the axle off yet. Once I heard that it was like, “Okay, this has to happen. I can’t not do this right now.” It wasn’t something I couldn’t do, I knew I could do it, it was just a matter of doing it perfectly in 30 seconds.

There’s not a whole lot to changing a wheel, especially for someone like you, but did you stress about maybe overlooking something in the rush to complete the job?
Yeah, but honestly once I started doing it I didn’t even notice anything or anyone around me. I was so focused on what I was doing that everything went perfect. It was just one thing after another. I don’t think I could have done it any faster. Everything just worked and we got it done.

All you guys have those carts full of wheels you bring to the line every time and you almost never need it. Are you ever tempted to just leave it at the rig? Odds are you aren’t going to need it!
Yeah, sure, especially at some of the races where you have to walk a long ways like San Diego. Or in Oakland, where the tunnel is really steep. It’s like jeez, let’s just leave this thing.

Or like in Minneapolis where it’s freezing cold?
Yeah! Of course we’ve all thought it, but we would never do it. You never know. If we left it at the rig and something happened it’d be on all of us. We probably wouldn’t even have jobs anymore.

So did you ever figure out what caused the flat?
No, not yet. Dunlop has the wheel and they’re going to be looking at it. My best guess would be one of two things. Either he pinched it on the sighting lap or the valve core got stuck. Obviously I checked it right before we went down there and everything was good. I don’t really know, but it’s not that big of a deal. We got it done and it’s all good now.

Talk about the roller coaster of having to change a wheel on the line, then your guy goes out and puts it on the box. That’s got to be a pretty big swing!
The adrenaline and everything that takes over got me through everything. Once we finished with the wheel he got off the line, got a decent start and started moving through the pack. I was giving him the pit board and everything and I was pretty calm. It was almost like a normal race, but once he finished and I met him at the podium, that’s when it all hit me. I started sweating profusely and I couldn’t catch my breath. It was pretty crazy. One of the craziest things I’ve ever felt, for sure.