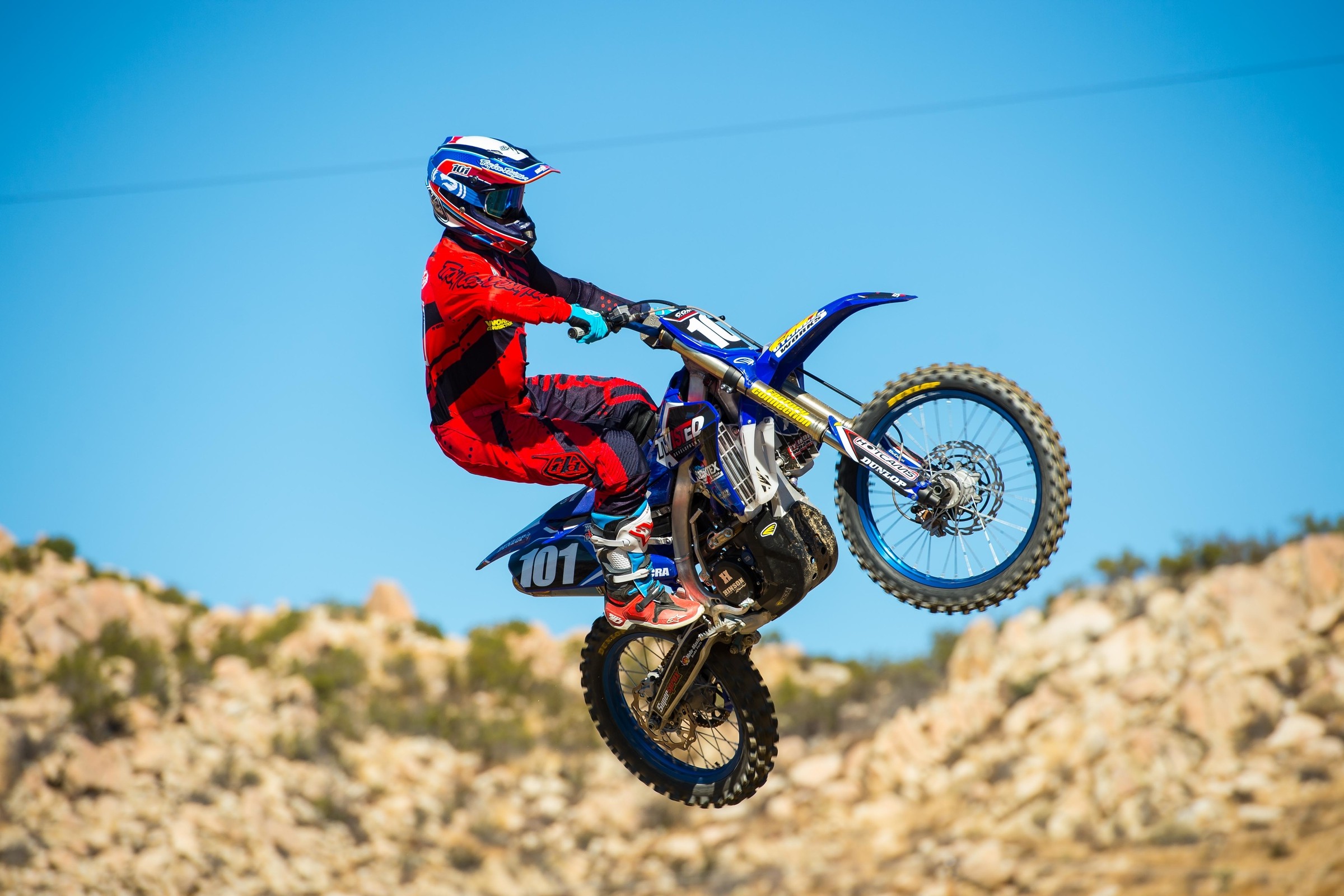 What happened to the boys and the equipment in San Diego was horrible. It looks like the drying agents that are used can be very damaging. Will Feld or the AMA compensate the riders and teams for damages/medical bills? Was it the same chemicals used to make A1 such a good race? It seems like a gamble that would only go wrong under the wettest conditions. I hope the boys heal up quickly. Think of the ones that ditched their goggles!

I caught The Whiskey Throttle Show with Emig, and then the latest with Tomac. Amazing work from you and GL. I'd like to see your industry jobs pay you enough to quit the day job. Not that the day job is bad, but you're an important part of MX/SX and Racer X. You deserve more soccer field time.

I’m not sure what Feld or the AMA will do, but it sounds like they’re trying to make it right by the riders. While Quicklime is caustic, it is a substance that these guys have been using for years at supercross races. Something went sideways last Saturday at some point, though I don’t know when or why. If the track crew knew that there was heavy rain coming, using lime didn’t make any sense. You aren’t going to be able to keep the dirt dry so just scrape the muck off the top the best you can and go racing. The lime only works when you’ve had a bunch of rain but the weather is clear and you need to dry out the soil a bit. So, knowing the weather was still coming [any idiot with an iPhone could see it was going to pour], there is no reason they should have put lime down. The sloppy, wet mud splashed onto the riders and caused mild chemical burns in areas where there was tight clothing or skin rubbing against fabric. We aren’t talking about burns like in Raiders of the Lost Arc when the Nazi’s looked at the Arc of the Covenant and their faces dissolved, they are moderate chemical burns that will be fine after a few days of healing and some Neosporin.

There are a couple guys dealing with eye problems and that has me more concerned that some raw nipples. Hopefully nobody has any lasting issues. As far as the bikes go, it’s a bummer that everything got ruined for no reason. If the rain had stopped and the track came around, it wouldn’t have been such a travesty that the bikes got beat up; that’s the cost of doing business. My guess is that they will be more careful moving forward when it comes to applying drying agents.

Thanks for watching the show… you should give the others a listen when you have a chance because each guest has been great in their own way. We’ve been having a blast producing them.

I just watched the Garage Build 1992 Honda CR250R video recently posted to Racer X Online. That was a great looking end result. The video brought back a lot of memories of the same era in which I was gaining interest in motocross as a youth. On an unrelated topic, I recently rode a snow bike for the first time this year. That was hands down the most fun I've had in a long time. It was so much fun that I haven't been able to stop thinking about it. There is always lots of talk in your column about four stroke engine sizes. I can say I am a fan of modern 450 motocross bikes after that experience. Have you ever ridden a snow bike? Did it leave a lasting impression on you? I'm worried I may end up buying a modern big bore four-stroke for the first time in my life.

I couldn’t have been more stoked on the way that bike turned out and the way it ran. It was way better that I thought it would be. Having said that, it was more work than I anticipated by a long shot and I won’t be rebuilding anything that old ever again. Well, not until the right deal comes along anyway.

I rode a snow bike several years back and, much like you, I count it as one of the best days I’ve ever had on a bike. We got turned loose on a portion of Mammoth Mountain Ski Area called Lincoln Mountain. It was the spring so that part of the hill was closed. I cut in the most insane outdoor track through the trees and up and down the ski runs. There was ruts so deep your radiator shrouds would dig into the snow! It was surreal and if I lived in a climate that had snowy conditions I would buy one of those kits in a heartbeat. It was almost 10 years ago when I got introduced to them and I’m sure they’ve improved significantly since then. For that application, the 450 is king. I say pull the trigger.

I need your expertise on this pressing matter (really a debate that has no consequences to anyone who wins).  My buddy and I were recently discussing bike choices. He rides a 450, he isn’t a pro or even B rider, just says it’s easier to ride. I hopped on it the other day and said no thank you. Not because it wasn’t fun but because it was a pain in the a$$ to hold onto, and I believe, scratch that, know I’m faster on my 250, and IT’S A TRAIL BIKE! On your show the other day you guys discussed the move up to 450s and got me wondering from your response. When you get to rip around a track on a bike of your choosing do you go for a 250 or 450 and why? Here’s to winning me a free beer!

That isn’t an easy question to answer. I have the luxury of having a few different bikes in my garage at any given time so I can ride the one that best fits the track and conditions. Understand that this perk of being a magazine editor is not normal and if I had to buy a bike I’d probably have one beat up 125 that I got on Craigslist and put a piston and ring into; bald tires, no knobs on the end of my levers… a real shit-show. But I live in fantasy land so when I’m going to a track that has good traction and big hills like Cahuilla Creek I like to ride my KX450. A place that is rough and slick like Glen Helen I prefer a Honda 250F and on my tracks in the hills or play riding a have a Husqvarna TC250 that is my ride of choice. I don’t say this to rub your nose in my good fortune, but rather to say that choosing one bike for everything would be difficult.

Honestly, if that were the case I might take a hard look at the KTM 350. That bike has the perfect amount of power but still handles great. If money were a deciding factor I’d pick up a YZ125 and slowly work it back into shape as I had the time and extra money. That is one machine that I could ride everywhere and enjoy myself. If you really wanted a 450 but you needed a good deal you can always look at the Suzuki 450. They are making smoking deals on those things right now and with a little bit of suspension work that is an awesome bike. I’m just trying to give you options. It doesn’t matter what you guys ride, just have fun. And good luck winning that beer.