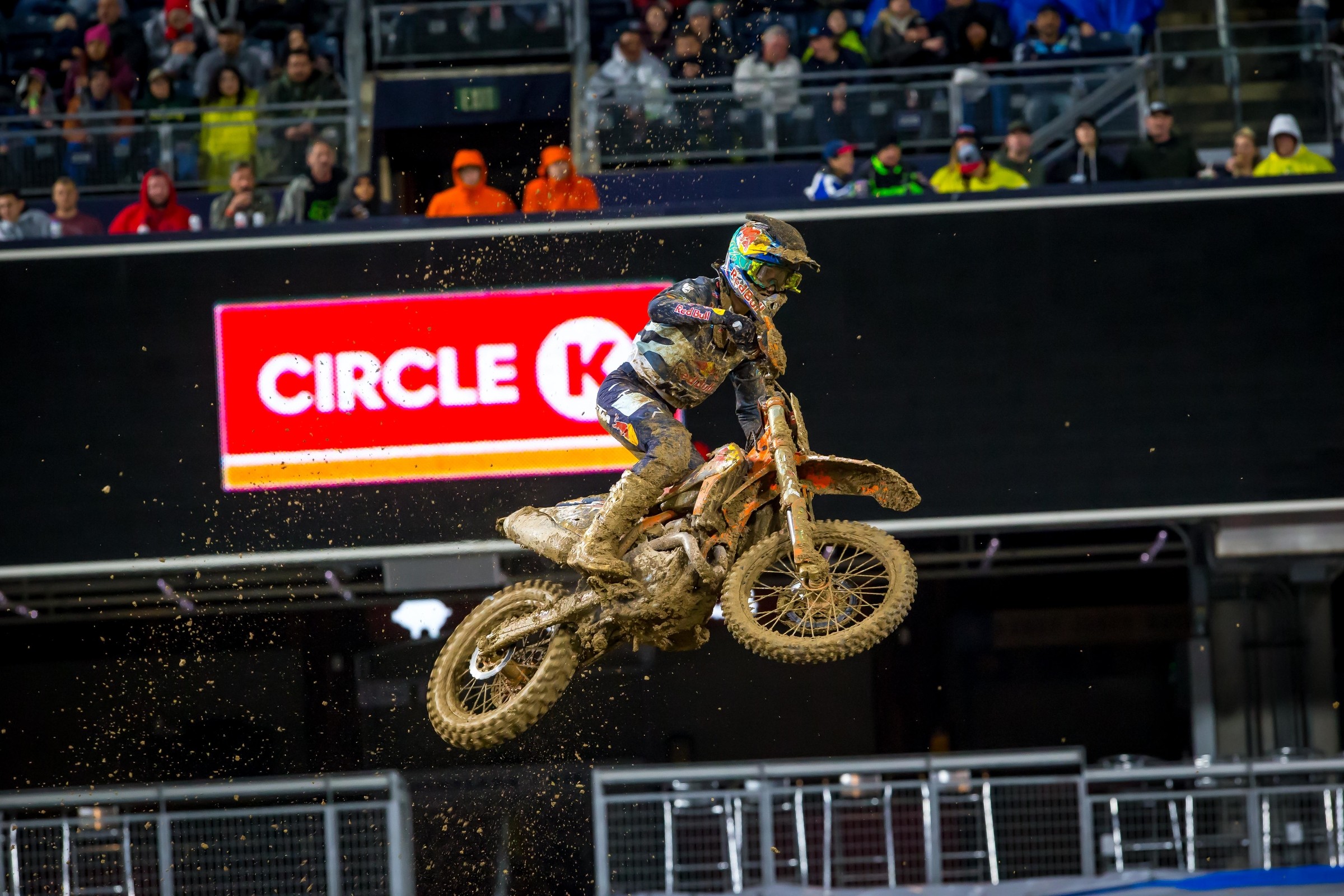 Points separating the top four riders in the 450SX Class, which doubled the top-four gap going into San Diego.

Points separating the top four riders in the 450SX Class after five rounds in 2018.

Number of 450SX machines that have had the red plates this season heading into round six. Jason Anderson brought them to Anaheim 1 (as the previous season’s champion does), Justin Barcia rocked them at Glendale, Ken Roczen had them for Anaheim 2 and Oakland, Cooper Webb’s KTM had the red plates for San Diego, and now Eli Tomac will have the red plates at Minneapolis this weekend.

Number of 250SX riders who have had the red plates this season. Colt Nichols took over the red plates after Anaheim 1 and had them for Glendale, A2, Oakland, and San Diego, but now Adam Cianciarulo has moved into the points lead on his Monster Energy/Pro Circuit Kawasaki. Nichols finished 10th at San Diego.

Points separating the top four riders in the 250SX Class, as Cianciarulo has 114 and Ferrandis (fourth) has 102. RJ Hampshire, who currently sits in fifth, has 75 points.

Number of Yamaha riders who were in the top three in their respective main event until they suffered bike problems: Monster Energy Factory Yamaha’s Justin Barcia was in third on the second lap before he had to push his bike off of the track and Monster Energy/Yamalube/Star Racing Yamaha’s Dylan Ferrandis was in second on the fourth lap.

Number of career top five finishes for Chad Reed in the premier class, after he finished in fifth at San Diego.

"Man, what can I say? Today was just insane with the weather conditions and the sloppy mud. For me, today was one of those days where I just felt on all day long. I had a few hectic moments in the main event, but we survived the mud, got our job done, and now we are leaving with the red plate which feels good. I am looking forward to racing back underneath a dome next week on a dry track in Minneapolis."

“It was a crazy day, and a long day. We waited all day to get out and do only one practice but I was able to qualify good in third and take third in my heat race. I didn’t get a great start in the Main Event and the dirt was so heavy it was packed up in my goggles and my helmet was really heavy. I scraped my goggles on the first lap a couple times to save my roll-off and it worked until the end, which was great.

I came back after that but I had no idea where I was to try to make passes. It’s crazy because you don’t want to crash, but you want to try to pass guys in front of you and make up time. But you also try to be safe and try to stay on two wheels, and that’s what I did. I knew Kenny [Roczen] was in front of me at the end but I didn’t know if that was for third or second – and then I crossed the finish line and looked at the board and it was a second, which is great. I’m glad I’m on the podium tonight and now go to the east coast with a dome stadium and a dry track!”

“Today was a really weird day. We didn’t even get on the track until after 5 p.m. and only had the one qualifying practice. I got 12th, which wasn’t great, but the conditions were absolutely brutal. I got off to a pretty good start in the heat race and ended up winning, which was great. Going into the main and being able to pick whatever gate I wanted was huge. I got off to such a good start, it was crazy, and actually almost went down in the first turn because it was so slippery but pulled it off; then I actually went down in the second turn, which I was really bummed about. In those conditions, you don’t want to be anywhere but in the front.

Going back to fourth or so was not what I wanted and just made it harder on me. I thought I was third most of the time but I guess I was second, and then Marvin [Musquin] got by me with just a turn left so I was pretty bummed. There was so much craziness going on, you can lose 10 seconds in a lap—or gain it, for that matter. I’m glad to be on the podium and be getting out of here safe. It’s been a long time since I’ve gotten out of the West Coast healthy, so I’m happy about that and looking forward to the rest of the season.”

“San Diego is always a race I really enjoy. I had a great week in California leading up to the race. It was a rain schedule, which is always challenging. There was a lot of sitting around going on. The track was gnarly. My heat race start was okay, but I was splashed with mud and couldn’t get clear vision quickly enough. I had to stop, but I came back to seventh. The main event wasn’t my best mud performance, but I’m really happy to get up into the top five. I’m back in North Carolina this week and looking forward to continue working with the team to get up on that podium.”

"There were a lot of positives for me to take away from this weekend. I got third in my heat race, which gave me a good gate pick for the main event, which is so important on a night like tonight in these muddy conditions. I got a good jump out the gate, but the mud got me on Lap 1. I didn't know what place I was in so I just put my head down, stayed calm, and tried to catch one guy at a time. I am already looking forward to next weekend."

“It was a crazy day, lots of rain so the track was super wet. I got a bad start in the heat race and got some water under my goggles, so I had to ditch them in the first turn and ended up stalling as well. I came from about last to fourth, so, ultimately, I was super happy with that ride. In the main event, I had a much better start than I’ve had lately. I felt like I was riding well enough to contend for a podium, or battle for the win, but I had a technical issue, and it took us out of the race. I just have to move on from this weekend and stay positive and keep on doing the things I have been doing and return to the podium sooner rather than later. The goal is Minneapolis, to get right back there. It’s been a tough few weeks but we’ll keep charging and never give up.”

“Emotions are not really good for me at the moment... Being third and not being able to finish the race because of a technical issue, is unfortunate. The track was really muddy and slippery; and the conditions were really extreme. So, to finish seventh; it’s not what I wanted but it could have been worse. We will continue to fight hard until the end of the season to get the best result as possible. We will prepare for the shootout and for a better weekend for the whole Star team at Atlanta.”

“It was a horrible night for me really. I can’t say it was all bad though, because I am leaving healthy, and tonight was a night to look at the bigger picture. Mud races can go well like it did at A1 or on the flip side, like it did tonight. I’m looking forward to using this break to get better and come out swinging at Atlanta. I’m looking forward to the challenge and clawing my way back up to the top of the standings.”

“Won my heat which was cool. Got a good start in the main and probably crashed in the worst spot on lap two. I was stuck for almost an entire lap! Really I’m just glad that’s over and ready for this break. I’m driving back east now to do some work there. I’ll be exited to go racing in Atlanta.”