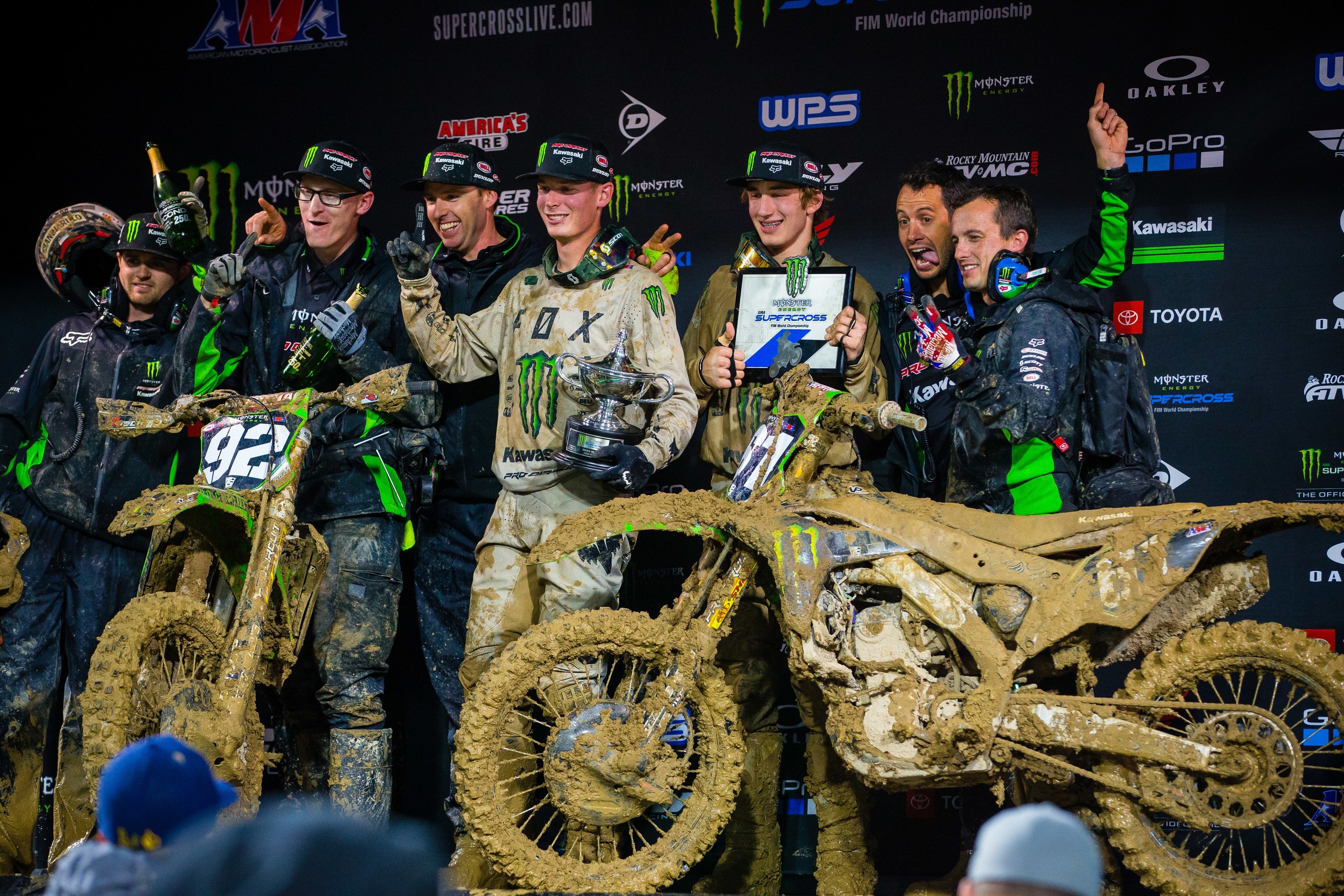 An up-and-down early season for Monster Energy/Pro Circuit Kawasaki has been erased by a 1-2 performance in the mud of San Diego, with Adam Cianciarulo taking his second-straight race win and the points lead in 250SX West Region, and rookie Garrett Marchbanks earning his first career podium.

Steve Matthes talked to team owner Mitch Payton on a variety of topics after the race.

Racer X: Good night for Kawasaki. Good night for Monster Energy/Pro Circuit. First off, Marchbanks, from the first lap of practice, was sending it and clearly comfy in the mud.
Mitch Payton: He said that today. I guess he likes the mud.

Clearly.
So that was amazing. And then in the heat race I thought he had a pretty good start, and then the first turn reached up for a tear-off or whatever and he went down. So he was in the back. Then he went down and got stuck under his bike. Then he’s going to the LCQ and I’m like, this isn’t good. If you don’t get a good start, you know what happens.

You’re on the outside gate.
So, you’re screwed. So I thought it wasn’t good, and then he rode really good but he still started outside. And then in the main event, I would say maybe 10th to 15th around the first turn. Then he ditched his goggles in the second turn.

[Laughs] All recipes for success!
I’m like, that’s a bad idea. They said it on the radio. I didn’t see it. I’m like, “Dude, why did he do that?” But he pulled it together and rode really good. He didn’t fall. He rode really good.

Last week I had said, Adam’s exciting, and you were like, we don’t want that. That’s not good. He’s been boring the last two weeks and it’s worked out.
We don’t want him to once again get the lead and try to check out too far. Even when he was jumping the finish line jump, I’m like, I don’t know… Are you sure you do that? And obviously he did, but just get the lead and get a comfortable gap. Just don’t try to run away from everybody. I think he did that tonight. It was difficult. He made a lot of little squirrelly mistakes and stuff like that, but I really think he’s in good shape. I think that helps him not crash like he used to. I think if he doesn’t try to run away from everybody and try to get the biggest lead, I think that helps him a ton, too.

You know if he wins this thing, I expect your number one reply to everyone and anyone will be like, “Oh yeah? He’s on the West Coast here all year, just like all my guys. He stayed out West. Rode with us, trained with us, and now he wins and that’s how you do it. You stay out West. I’m never letting anybody else ever again in the history of Pro Circuit to go out East.” That will be what you’ll say.
No, that’s not true. Like, when Ricky [Carmichael] rode for us, he was from Florida…

Don’t use him. Pick anybody else.
Other guys—James [Stewart] did it. He was from Florida. It’s hard to uproot their whole family and move them to California just because we want them around us.

You just picked the two best riders in the history of the sport ever. What about everyone else?
[Laughs] Yeah, that’s difficult. But anyway, it has helped. Actually to be honest with you, Nick Wey has been working with him. So Nick actually is day to day with him. I think just having Nick around him. For whatever reason, they gel well together. They work together and they work on a lot of technique and stuff. They’re not just burning laps and ripping laps and doing all that. It just seems like for whatever reason it seems better. He’s happy. We’re happy with it.

Now everyone just has to stay West, which is what you always want them to do. Everyone has to stay out west.
Well, I’m good with them being out here for the winter so we know that they’re ready, and then once outdoors starts I know that I want them out here more than they ever have been. If they’re not out here… We gave them two choices. We wanted them to go to Carmichael’s or be in California. I think those are two great places. I know Jeannie [Carmichael] runs a really solid program, and I think she controls it. Martin [Davalos] is down there and Joey [Savatgy]’s there, so they ride together all the time. I trust what they do there. I like that. If not, I want them to be out here. I know Robbie [Reynard] works with Austin [Forkner], but we wanted a little more from that. I think Austin has worked harder this year than he’s ever worked.

I don’t know how to put this delicately. I love Nick Wey. I worked for him one year as a mechanic. You had him for many years. This Adam Cianciarulo/Nick Wey thing is working. I’m surprised a little bit because Nick…how do I say this nicely? He’s is a bit of a head case, or was a bit of a head case? I used to move his bars one millimeter up, one millimeter back. All that stuff. You know that stuff as well as I do. But for whatever reason, he’s working great. Obviously maybe he’s doing a little bit of things that I should have been like this, Nick is, when I race. I don’t know, but it’s working. Maybe it’s a mean thing to say.
No, I think that’s probably a lot of the case. I think a guy like Nick was a guy that was always searching. He did it with me. It would be one moto one thing, one moto another thing. We’d finally just, “No! There is nothing wrong with the bike.” But I do believe as Nick got older, I think he got smarter about the technique side to stay still relevant. What I've seen is Nick is really good at technique and video stuff. If you talk to somebody, that’s one thing, but if you have video then you can show it to them, then they can’t deny it, right? So I think he’s really good at that and he’s been good with him. For whatever reason, it works out really good. I don’t know that he’s the toughest guy on him, but I don’t think he needs that. I think we’re trying to keep it on a level in-between. It seems to be good for him.

Less Alan [Cianciarulo, Adam’s dad] around. I don’t know if that’s on purpose. I don’t know if they had a blowout. I don’t really know, but a little bit more independence from Alan than he’s ever had in his racing career.
Well, [Adam] decided this year that he wanted that. He wanted to try to be his own guy. Obviously I believe his dad had a major impact for where the kid is to this day. I still like his dad. I like [his] mom. Everybody, we’re all happy. I think it’s his time. He wants to try to grow up, and he wants to attempt to do it on his own. Then it’s like, “It’s my fault if I don’t do it.” Then I think for whatever reason, that’s what he wants to try. Right now I can’t deny it seems like it’s good, but I think his mom and his dad had a lot to do with getting him to where he is now, and I think that’s important. I know he loves both of them, and I think that’s super important.

Next week we’re going to Minneapolis. Is 2019 the year of the Marty?
Marty and Austin are coming. It’s a real deal. It’s real.

I can’t wait. I hope he gets it done.
[Pause] It’s the year of Marty and Austin. Both of them. I think they’re both going to be awesome. I don’t know who else to expect. Who do we have over there?

Are we going to make a bet on this? Alex Martin versus Marty Davalos, East Coast?
I like Jeremy and Alex both, but if I pick supercross, Marty is going to beat Alex no problem.

We’ll see.
Should we put the bet right now? I offered you a bet. You turned it down.

That’s too much money for me!
That’s how confident I was!

Very confident you are. We’ll see. We’ll check it out… it’s got to be end of the season results because that’s where I’m banking on Marty to be a little inconsistent.
I’m not worried about that. I’ll make it easy on you. Why don’t we do: you have to come to my shop and buy me lunch. If I don’t, I’ve got to drive to Vegas and do the Pulp[MX] Show.

I like it. You’re on. I’ll come to the shop. I’ll buy you lunch, and I’ll sweep up or something.
Do air filters.

Fine.
[Laughs] I don’t want you to do my air filters. You’ve probably forgot how to do them. You’re like, I don’t remember!

[Laughs] I’ll just buy you lunch!
I think just lunch. In N’ Out. That’s easy. Or I drive there and we do Pulp.