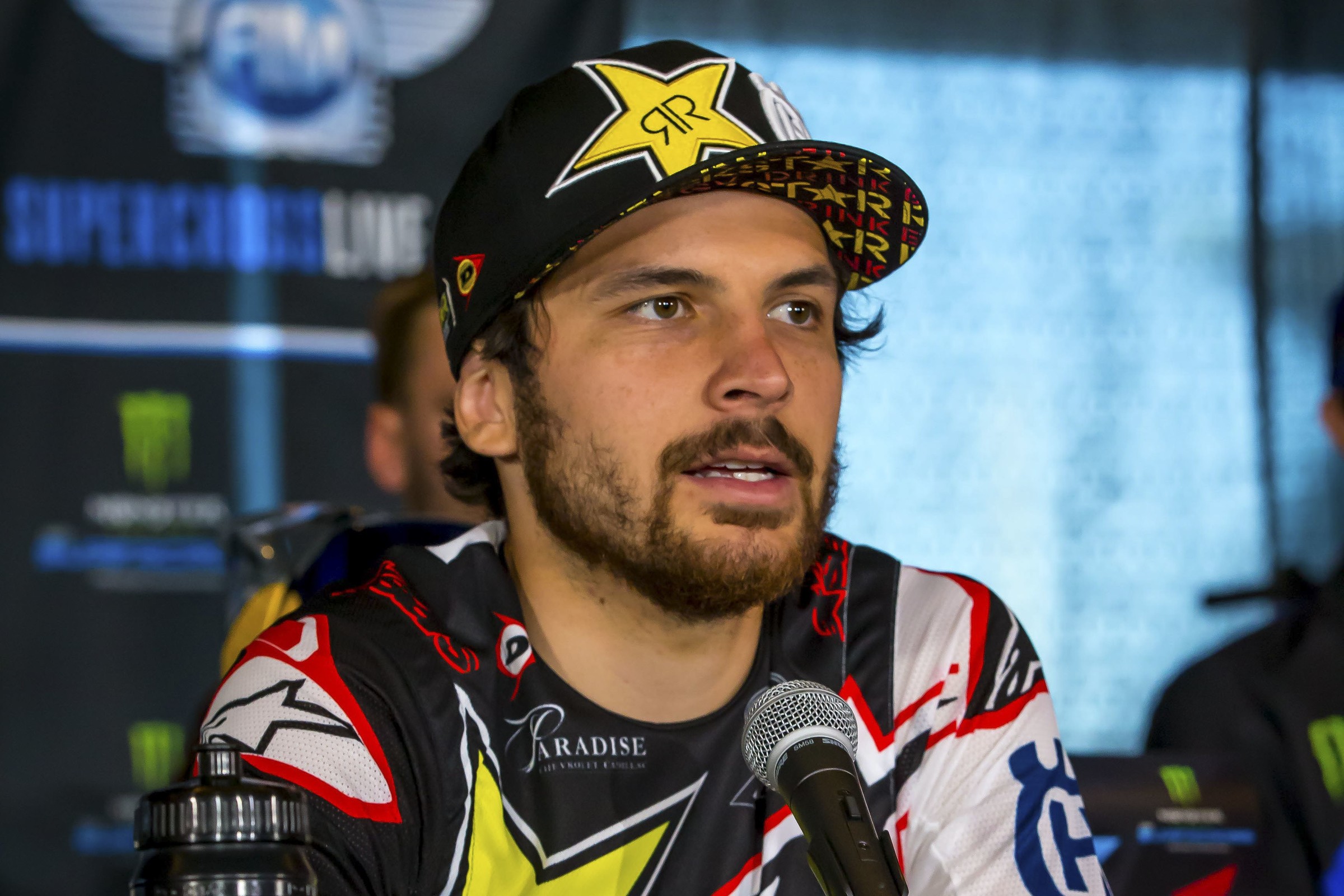 Jason Anderson’s title defense in Monster Energy AMA Supercross is already over. The Rockstar Energy Husqvarna rider went down on the Monday after round three, and arm surgery and other ailments will cost him his indoor season.

After speaking with Anderson on Friday, we learned his injuries are a little more extensive than initially reported. In addition to his broken arm and ribs, he also suffered a collapsed lung, lacerated his liver, and “had broken some stuff in [his] back” too. Not surprisingly, he doesn’t think he’ll be back racing before the end of the season. He didn’t rule it out, but said right now it makes more sense to focus on being solid for the Lucas Oil AMA Pro Motocross Championship than to try to rush back for a few races at the very end of supercross.

Racer X: Take us through the crash that took you out of this season.
Jason Anderson: It was the second lap of one of our eight-lap motos. I went to place my front wheel going into the whoops, completely missed it, and dropped my front end. I’ve never really crashed in the whoops, and that was definitely the worst I’ve ever had.

Did you know instantly the series was over for you?
I knew I was messed up, but I didn’t know how bad. I couldn’t breathe, and even when I got to the hospital I couldn’t breathe very well. I didn’t know if it was ribs, lungs, or what. I knew my arm was broken but that was just kind of the last thing on my mind because I was having such a hard time breathing. I got to the hospital and they told me I’d broken a bunch of ribs, had a partially collapsed lung, a lacerated liver, and had broken some stuff in my back too. It was a pretty good one. I was just thankful that I was somewhat okay. There were broken bones, but those heal.

So you’re out for the season.
Supercross, yeah.

The initial reports didn’t sound that bad, I thought maybe you’d be back for a few at the end.
There could be a chance, but I don’t think it’s going to happen. I’d rather put all my time into outdoors and have a really solid outdoor season.

There was some talk, some speculation, that you may have been dealing with a preseason injury. Is there any truth to that?
No. I knocked myself out right before Christmas but that was about it. It wasn’t anything too big.

Talk about not being able to defend the championship. What goes through your head when you think about that?
I don’t really think too much about it. It’s obviously a bummer, I want to go out there and win, but at the same time, I’m not going to let it ruin my day. Winning the supercross championship was a goal, it was on my list, but I’ve set other goals too, like maybe winning an outdoor championship. I want to win another supercross championship, it sucks not being able to defend, but it’s not going to ruin my day.

What are your thoughts on this season so far? It’s been close.
It’s been pretty good. The competition is super close and I don’t feel like there’s one guy riding super awesome. Everyone’s super close to each other, it’s a little different than years past, where usually you have a good upper echelon and then it dwindles down. But right now everyone is good. From Cooper [Webb] to [Eli] Tomac and [Ken] Roczen. Everyone is good.