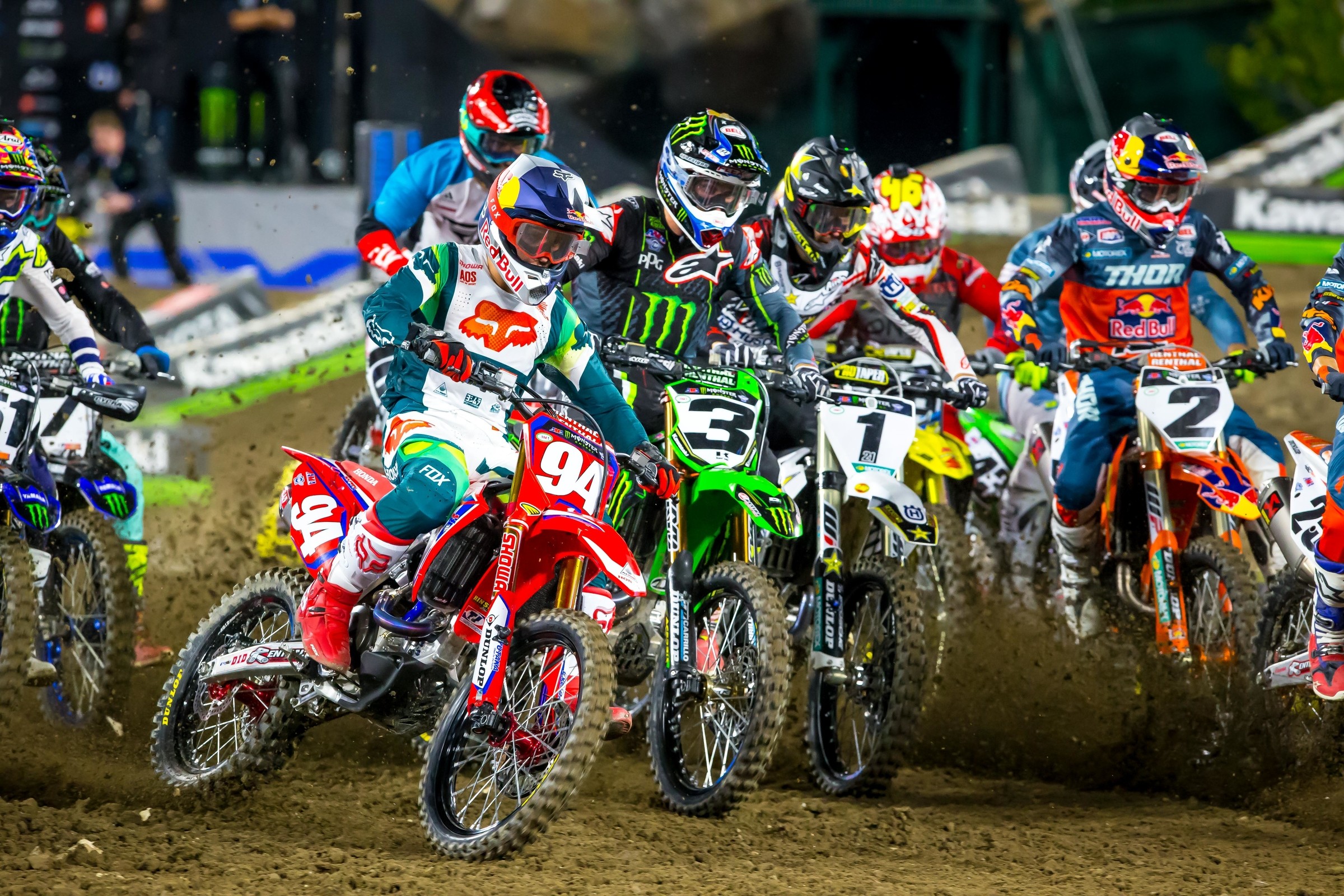 Just what an unpredictable early season of Monster Energy Supercross needed—a jolt of unexpected Triple Crown action, and yet another first-time winner. In what is rapidly turning into the wildest early season in recent SX memory, Red Bull KTM’s Cooper Webb grabbed his long-awaited 450 breakthrough win, matching last week’s winner Blake Baggett in the new winner category. Further, Webb’s win had added spice after a scintillating first-race battle with his rival Ken Roczen, with Webb making the pass for the lead in the last corner on the last lap. He followed it with a wire-to-wire win in race two, and a steady third in race three to notch the victory. Now into his third 450 season, and his first in orange, Webb has finally delivered on the promise and potential that made the next-big-thing in this industry just two years ago.

“Even last weekend I was straight-up tenth, so to bounce back from that I was pretty stoked with myself,” said Webb. “I mean, obviously if you had told me I would have won tonight I probably wouldn’t have believed you, but yeah, after that first one being up there, I kind of remembered what it was like. I made a big change this year, and these guys gave me a good opportunity because they still believe I’m capable of being up here. It’s cool to have that hard work pay off and have it happen sooner rather than later. I’m stoked. Still it hasn’t hit me, quite yet, but it’s cool to have an up and down two years, and then be back batting with the guys.”

Webb’s win, following 5-10 finishes at the first two rounds, might seem shocking, but he has been fast all along. At round one, he posted the fastest lap time of the main event. Last week he was moving through the pack before the red flag restart, and he actually tried a bike adjustment during the restart time, and it didn’t work. So he’s shown more potential than his results reveal---this time he just put the pieces together, including three great starts. For Webb, starts have been a weakness, but a lot of off-season work has clearly upped his game. Webb said his second race, the wire-to-wire triumph, was probably the first time he ever led a supercross from beginning to end, including his 250 days.

It was especially sweet for Red Bull KTM as Webb’s teammate Marvin Musquin was second, with 3-2-2 scores. Musquin appears to be progressing after off-season knee surgery.

“This week I only rode a little bit on Monday," said Musquin. "I stayed in California and we got a lot of rain, but obviously it helped on the knee. I tried to work on it the whole week and I felt good getting on the bike compared to last weekend, so it was important and that’s what I need – to feel good and not have any pain. It was great racing tonight, I didn’t win any motos but I got second overall, I was consistent and I was able to battle for the lead and for the podium.”

“It’s a crazy championship when you see three different winners and different guys on the podium,” added Musquin. “It’s good for the industry and the fans, it puts on a good show. Different tracks and conditions in the first three races, too. The tracks have been really good, really technical, and longer, too. I’m happy about that.”

Maybe it was the Triple Crown format, maybe it was the tricky track, maybe it’s just the lack of a pecking order early in the season, but the racing was up and down for everyone besides Webb. For example, in race one, Tomac passed Musquin, but ten minutes later Musquin came back and repassed Tomac for third. A lot of the riders are playing the consistent game and not pushing over the edge.

“The three races have been so different, and no one has really been the guy. For us we are way ahead of where we were last year,” said Tomac. “If I back up to last year everything If I back up to last year things were all good, but I fall over and smash my shoulder. You look at past champs, they were just Mr. Consistent all season. You have to be consistent in these early rounds and set the tone. We gained ground in the championship tonight.”

Besides the KTM boys, the rest of the 450 class was as mixed up as the Triple Crown format is supposed to be. Roczen was great early, but a crash in the whoops in the second race left him with a fifth in race two, and he battled hard for fourth in race three, at one point closing in on Webb, but never able to get him. Roczen is still in the search for that elusive next supercross win, but still holds the series’ lead heading into round four in Oakland.

You want proof of crazy? Dean Wilson took fifth overall with 9-8-7 scores. The battles in every 450 race this year have stretched deep into the pack, and Wilson was in a fight for most of the night, but made the most of it.

Other riders were less consistent. Justin Barcia had a big crash in the final race and didn’t finish—early reports from Yamaha say bruised tail bone. Chad Reed’s bike broke on the line for race two, so he missed that race. And Jason Anderson’s mysterious season continues. His night was a mix of great laps and terrible ones. And off track excursion in race three in a 17th, and his 6-6-17 scores delivered ninth overall.

Cole Seely showed his first signs of heavy-duty speed this year, but couldn’t hold it to the end of the races. He was 5-7-13 for sixth overall.

The Triple Crown format made the 250 race quite interesting. Adam Cianciarulo started the night hot with a holeshot and two perfect laps—and then a crash. Colt Nichols went on to win the race, but in the next race he wasn’t as good as his teammate Dylan Ferrandis, and fell while trying to hold him at bay. Then in the third race Shane McElrath caught fire to win the race and the overall.

“I didn’t start the day too well,” said McElrath. “Dissapointed with the last two weekends, I didn’t ride good, and we realized my bike setup that was good in the off season wasn’t going to cut it in the races. We made changes everytime we went out on the track, but today we decided to just stick with one thing. Just stayed in the mix the first two, I rode a little tight in the first two. The last one, I knew it would show the fitness side, and it was good.

“Good night for me, I was consistent with a 2-13 and consistent is not always my best thing,” said Ferrandis, who was second. “I’m tied with Shane (in points for the night) but I guess I’m first loser (McElrath won on a tie breaker). I just need to improve a little bit on myself.”

Nichols was better at the start of the night than the end.  “I started out great, second one I tipped over and I’m kinda bummed on that. Third one, I don’t know, just making mistakes. I was struggling to get that quad before the whoops. These guys were on it and I was just a little flat. A little bummed I started great and went back to fourth. But I don’t think a lot of people would have had me up here on the podium at all three rounds.”

Inconsistent has been Adam Cianciarulo, who crashed while leading the first race and then crashed on his own in race two. His start wasn’t good in race two, and in race three he battled with McElrath for a bit before settling for second. His 4-14-2 scores salvaged fifth overall.

Most of the riders seemed happy with the decision to make all the Triple Crown mains the same length, and overall they seemed more comfortable with Triple Crown.