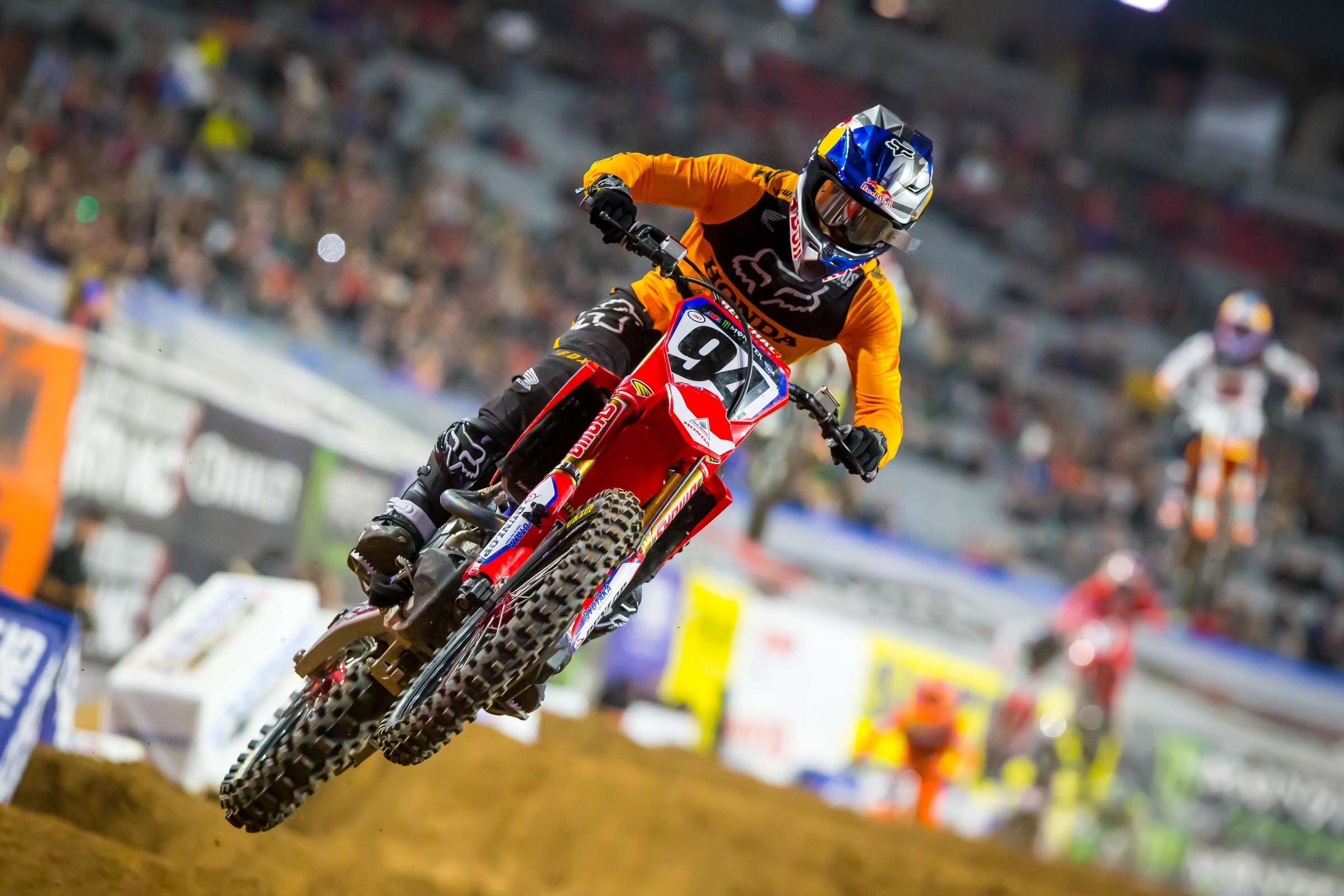 Redux News and Notes From Glendale

The last time Ken Roczen held the red plates in Monster Energy AMA Supercross. In 2017, Roczen won the first two rounds of the championship before sustaining a career threatening arm injury at Anaheim 2. Roczen will enter round three this weekend with the red plates.

Career win in 450SX in Monster Energy AMA Supercross for the Rocky Mountain ATV/MC-WPS-KTM team, which started as Butler Brothers MX in 2004.

Finish for privateer Robbie Wageman at Glendale, a career-high for the Californian. He previously made two career main events—San Diego and Salt Lake City—both in 2018.

Finishes to begin the 250SX West Region for Colt Nichols. Prior to this season, Nichols had finished second (Oakland 2016; Arlington 2018) just twice in his career.

“Glendale is always a big, big track and it’s always been a really tough race track for me, so I’m happy because this year was a lot better. I got a great start in the heat race and I got the win, so that felt really good to get back to the top even though it was just the heat race. I wanted to do the same thing in the main and I got a great start again and was leading at the beginning but then I got passed for third. I was behind [Jason] Anderson and I was pretty happy about my riding until they red-flagged it, unfortunately, for Malcolm Stewart that went down. Hopefully he is okay, that was a bummer to see. We restarted in our spots we were in, which was good because I thought we were going to have to restart the whole race. Unfortunately, I had too many mistakes in the first two laps and it cost me two spots and I lost too much ground on the other guys. Fifth place is not too bad considering all that happened in the main. It’s an improvement for me with the riding and the bike, everything was working good.”

“I had a lot of positives from the day. I felt fast on the track and was flowing really well. I also had good speed in the heat race. My start was good in the heat but I made a mistake in the main, which put me at the back of the pack. On my way to ninth I felt really comfortable and gained a lot of confidence passing other guys, which is exactly what I need. I’m really excited to get the first couple out of the way and finally feel like I’m ready to do battle now with my boost in confidence.”

The weekend was a bit up and down for me. The day started off good, I was able to qualify second overall, which was awesome and my speed was there. In the heat race, I didn’t get the best of starts and made a few passes to get into fifth. In the main event, we didn’t get a good start again, made a few passes and then the red flag came out. It was kind of wild – it kind of flusters you and you’re not sure what to do. So, I got going again and unfortunately made a few mistakes, got shuffled back, passed a few guys and I just didn’t ride all that well tonight. It was a little tough but we’ll regroup this week and try to make some improvements with myself and be back at A2 next week to take on the Triple Crown and hopefully get back in the top five.”

“As frustrated as I am with the main event finish, I can take a couple positives out of the day. I was fastest overall in the daytime qualifying sessions, and I had a really good start in the main. Unfortunately, I crashed soon after that and was in last place. Fixing those little mistakes will be the difference for me.”

“Glendale was a really positive day, and the heat race was special. The team did a great job of helping me find a feeling that I’ve been chasing. This helped massively throughout the whole weekend. The main was disappointing, but I’m focused on the feeling we found, and I’m looking forward to a solid week ahead. Video replay shows what I’m doing wrong on my starts, so I’ll look to correct that before Anaheim 2.”

“Felt good all day,” said Hampshire. “My speed was better this weekend, just my starts were terrible! It’s hard to be bummed about another fourth because of how bad my start was, but I was so close to a podium. That’s the goal every weekend and we’ve been just off. I’m really happy with how I feel on my bike right now and excited to see the progression each week!”

“There were good improvements at Glendale. My Suzuki RM-Z250 was working really well all day long. I felt like I had the starts dialed in. I’m really comfortable on my bike right now and feeling fast. I’m ready to head back to Anaheim and drop the gate on the three main events for the Triple Crown. I want to give a big shout-out to my whole team for all of the work this weekend. We are having fun, and I’m confident better results will come!”

“The track was slippery but it was a good layout. The bike was awesome. I felt I had the speed for a good result, but I crashed hard in the race. I worked hard to regain some points in the championship, but it was a disappointing night. I’m not happy with sixth.”

“That was a much different start compared to the first race which is something I’ll be learning this year,” said Marchbanks. “Starts are very important with how quick the guys out front can get away in the first few laps. We’ll be working on starts and continue to build so we can keep racing inside the top 10.”

As we mentioned last week, moving forward, we will not be doing our weekly “Sign of the (Lap) Times” feature on Racer X Online, which has run since 2006. Instead, we will feature some lap data in Redux this year.

Since it is early in the season still, we figured we’d post the best laps and average lap times of the entire field—450 and 250—which you can check out below:

As we reported over the weekend, Smartop/Bullfrog Spas/MotoConcepts Honda’s Malcolm Stewart underwent surgery on Sunday for a broken femur sustained in the main event Saturday night. The injury occurred when Malcolm suffered a violent crash in the whoops early in the main event.

Team owner Mike Genova released a heartfelt statement on Monday in which he expressed how proud he was of Malcolm for his commitment this off-season.

"While I am super bummed and disappointed for Malcolm, his family and our group, I am equally grateful and happy that Malcolm's injury is limited to strictly a broken femur of which the doctors performed surgery on Sunday morning,” he said in part. “My gratitude and happiness stems from the experience of having one of my guys lying virtually motionless for some twenty minutes, thirty feet away from me (I was in the managers tower) having no idea the extent of the injury, thinking the worst and having no way to be by Malcolm’s side to support and comfort him. Followed up by Tony [Alessi, team manager] and I going to the hospital after the race, only to find Malcolm alert and upbeat, (pain meds may have been working) preparing to eat an In and Out burger, insisting on how he will be back in no time, stronger and better than ever.”

Such a bummer on what happened last night. Surgery this A.M on femur! We will be back better than ever. Sorry i let you guys down! I appreciate all the prayers you guys sent me! I’ll give you guys a update soon.

As we reported over the weekend, Joey Savatgy sustained a concussion in his heat race on Saturday, according to the Monster Energy Kawasaki team. Savatgy was shown on the TV coverage talking with the Alpinestars Mobile Medical Unit staff following the crash. According to the concussion program for Monster Energy AMA Supercross, “If concussion is suspected, the rider is required to go directly to the Alpinestars Mobile Medical Unit. The athlete is not allowed to return to practice and/or racing until additional testing is performed.”

We will update Savatgy’s status for round three of the championship once more information is available.

Congrats to his Chris Blose, who found out at his hometown race on Saturday that he and his wife are having a baby boy!

Gender reveal at the hometown race and it’s a boy!! @bjbblose And I couldn’t be more excited!! Now, let’s go racing!!