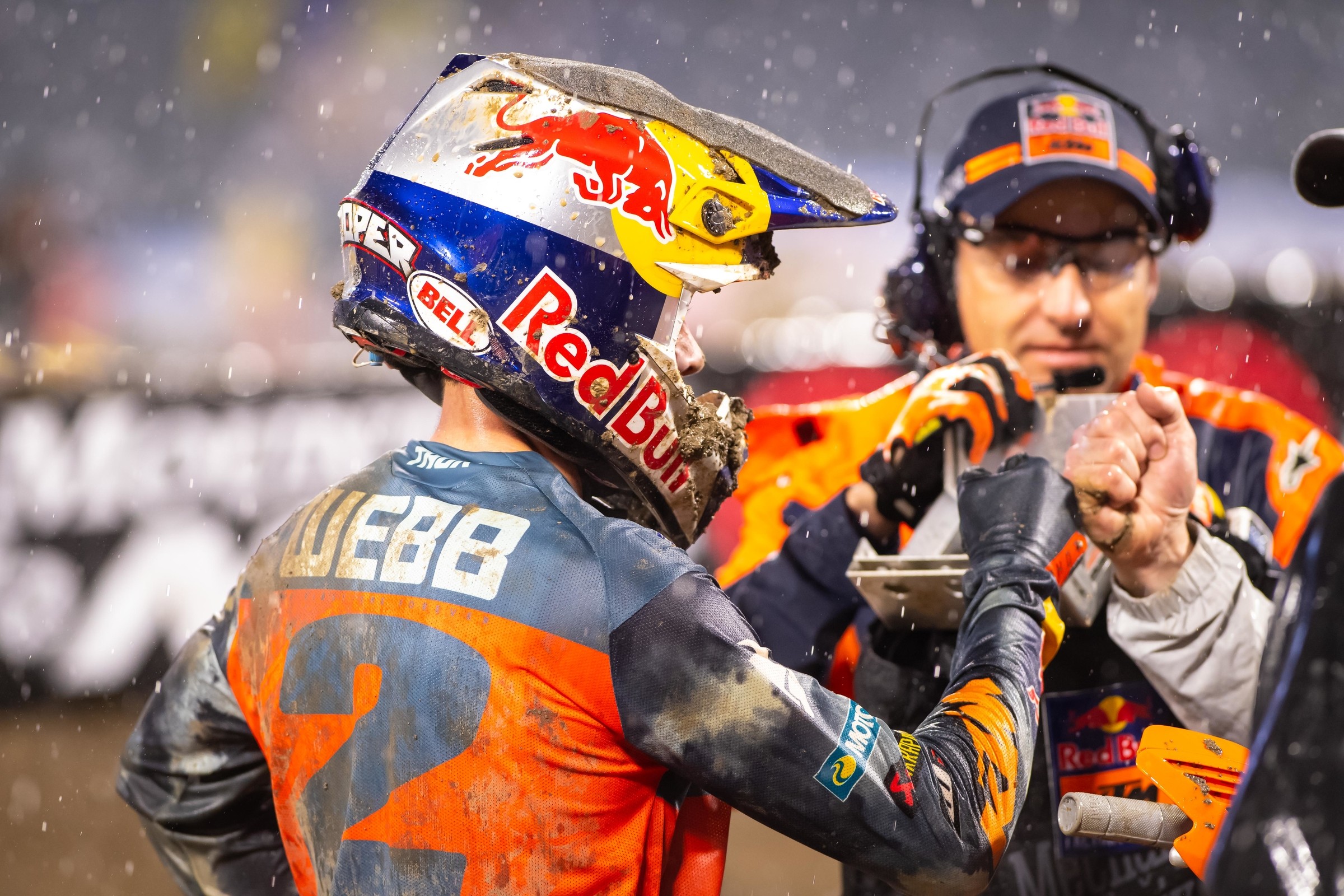 Cycle News once wrote for an Anaheim headline “Happy Blue Year.” Well, the blues are mixed with black now, but the results were gold. Justin Barcia won the 450SX main event, Aaron Plessinger was a strong sixth in his 450SX debut, and Monster Energy/Yamalube/Star Racing Yamaha went 1-2 in 250SX via Colt Nichols and Dylan Ferrandis. Hot starts for a team don’t always mean anything, but the Yamaha 450 group really needed this one, its first supercross win since relaunching as a full-factory team in 2015.

Malcolm Stewart buzz has been stirring through the off-season. We’d heard he was fast, in shape, and very happy with the Smartop/Bullfrog Spas/MotoConcepts Honda. But would “flying at the test track” actually carry over to the race? It did. He took second in his heat race and then ran second for most of the 450SX main. Malcolm’s career-best 450 result coming into this race was a sixth! Here, he was fighting for the lead. He crashed and finished seventh, but that doesn’t matter. Mookie fever is running rampant through the series.

What a story. Dean Wilson isn’t as privateer as it looks (yeah, he’s pitting out of a Sprinter van but he is getting bike help from Rockstar Energy Husqvarna) but he’s not a full-factory rider, either. When the factory team called to offer him a fill-in ride for the injured Zach Osborne, he decided to stick with his own program. It worked. This was easily the best 450SX ride of Dean’s career—well, maybe his very first 450 race was this good, at Daytona way back in 2014. Since then, it’s been a miserable run of arm pump, injuries, surgeries, and more injuries. Dean didn’t win the race—he didn’t even get on the podium—but he was a winner. After all of those down years, he just needed something to break his way. Finally, it did at Anaheim.

By the way, Dean hasn’t gotten a great start in years. He pulled two holeshots on Saturday night. It’s amazing how being in the right frame of mind can suddenly change everything with starts.

There just might be some drama going on over in the KTM/Husky group camp. We heard a variety of stories about bike setups, suspension concepts, and frames throughout the weekend. Seems like the factory boys of Marvin Musquin and Cooper Webb (Red Bull KTM) and Jason Anderson (Rockstar Energy Husqvarna) might be sorting things out.

This isn’t a new phenomenon. A lot of riders and teams—even the best ones—come into Anaheim and miss the mark. Eli Tomac’s puzzling rides in early 2017 set him in a huge points hole. Ryan Villopoto had all sorts of problems early in 2014. Heck, even during Team Honda’s mighty run through the 1980s and 1990s, the bikes were not right at the start of the ’92 season, setting Jeff Stanton and Jean-Michel Bayle into comeback mode.

In all three scenarios, the bikes got sorted and those guys came roaring back. Things usually get fixed by round three, so don’t panic.

But, a word about those results. Anderson’s 14th was the worst race of his 450SX career, hands down. Maybe that was the mud? The pressure of holding the number-one for the first time? He can make up the points he lost here, no problem. The bigger fear is if this result indicates a bigger problem. As always, you can’t make hard statements after just one race.

Musquin was below par also, but he has missed valuable bike time in the off-season due to a knee injury. So an eighth might be all he was looking for, considering. But just when you’re ready to make strong opinions on the KTM/Husky crew, there’s…

Holy crap, here it was, the first super-duper sign we’ve seen from Cooper Webb since joining the 450 class. He’s had some podiums here and there, but this was different. It was straight fire! Cooper came from down in turn one and absolute dead last to fifth. His lap times down the stretch were several seconds faster than the riders in front of him. It helped that he kept doing the huge infield doubles every lap, when the mud had turned them into an iffy affair for everyone else. So, does this mean Cooper Webb is back? Or is he just a bad dude in tough conditions?

Justin Brayton joked that Anaheim 1 is “round ten” for him, because he raced nine different off-season events and had a head of steam. It looked that way in practice, because he was on the gas. But in the main, the mud got him, and there was quite a bit of chaos out there. Brayton finished 11th.

Southern California born Blake Baggett is not a mud specialist, so his main event quickly went south. He finished 12th, which is the exact same spot he finished at A1 last year. That’s the bad news. The good news: until the rain came, he looked much better than he did last year, even carding the fastest lap in qualifying. If the rain held off, Blake would have been very fast. Stay tuned for more.

Veteran race watchers often say to get a breakthrough win, and the resulting confidence, you need circumstances to break your way one time. This was Colt Nichols’ time. He got the holeshot on a muddy track and rode well in a race where everyone (well, except one guy, see below) was just trying to stay up and collect points. Colt was the fastest and smoothest rider in the main, no doubt. He seized the opportunity, and now he has all this confidence to play with. If he can stay healthy, he’s going to be dangerous.

A fifth is a good salvage job, but everyone knows AC has speed to burn. He just has to show he can avoid the mistakes. At Anaheim, at least, he still made them. He came into turn one too hot and slid off the track, then made several more errors while riding like a mad man through the pack. It was fun to watch, though!

This was perfect. AC took RJ Hampshire up high in a corner, RJ stood his ground and gave it back. No one got hurt. This wasn't right or wrong, it was the way racing is supposed to work.

Both Suzuki 450 riders got caught up in the turn-one chaos in the main. Justin Hill showed speed in practice, but the mud dampened that. Chad Reed, meanwhile, rode well to come through for ninth, but that was probably due to his overall experience in muddy races. In practice and his heat, Chad needed more.

Aaron told me on Friday that his off-season back injury was really bad—he compressed so many discs that he’s actually shorter now! He also said he isn’t close to Barcia’s lap times at the test track and had no idea what to expect in the race. Well, he rode very well and took sixth. Of course, he was super happy, because Aaron is always happy.

Also a first turn crash victim, Savatgy only placed 16th in the main. But he was great in practice (third fastest in first session) and made some good moves in his heat race. Joey looked as comfortable here as he did at the Monster Energy Cup, which is great news for him.

Everyone is excited about a #deepfield going into A1, but nothing kills the buzz like a boring, predictable race. Watching Deano and Mookie lead the way while Anderson was going backwards, and guys like Musquin and Tomac were outside the top five was far, far from predictable. So we have few answered questions, and many new ones to ask, as well. It was the best-case scenario for round one. Let’s do it again at round two!