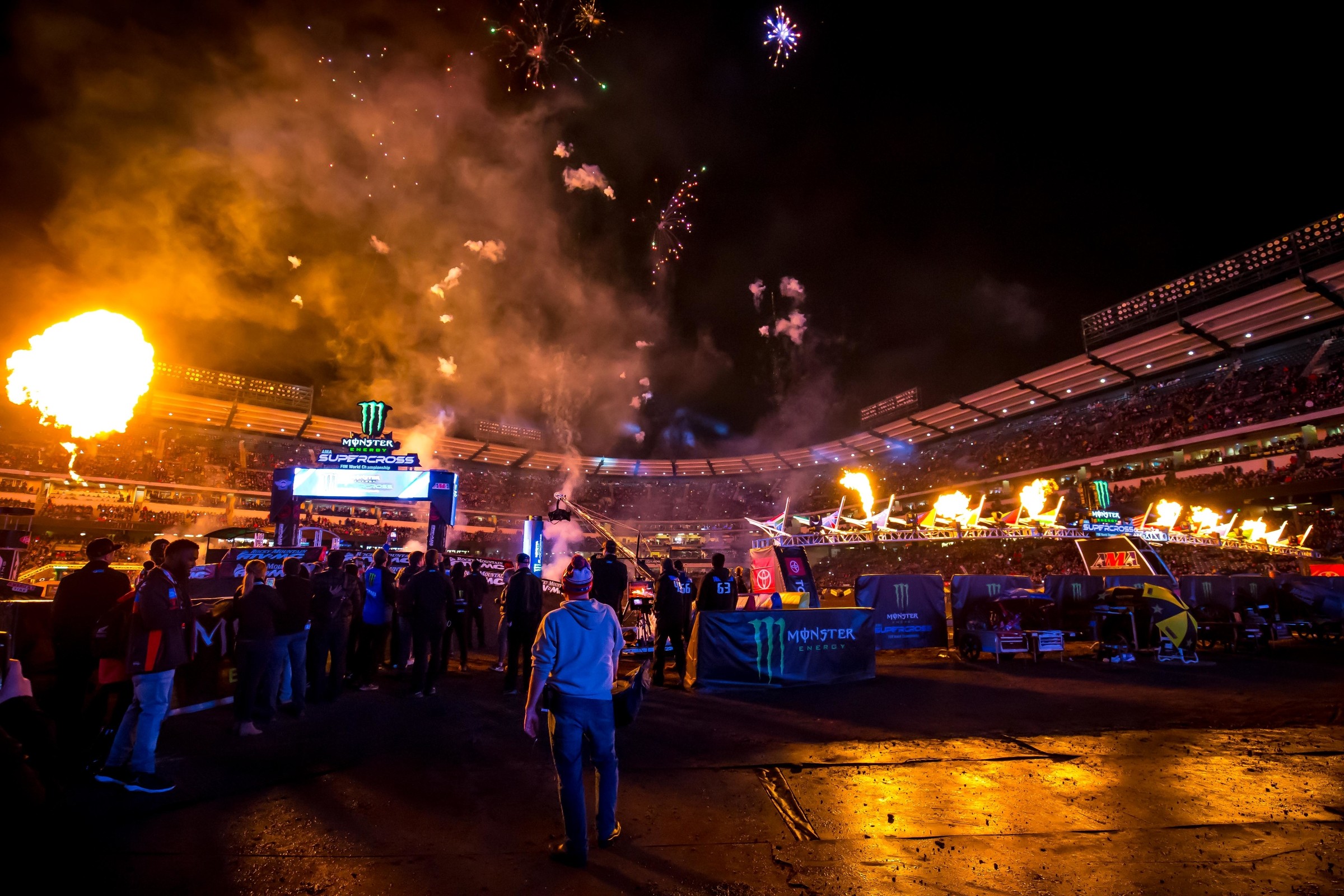 There are times when the final results aren’t much different than the running order of an entire race, and there are times where a glance at the results sheet won’t tell the true tale of the race. Tonight it was the latter.

On a wet and slick track that was only getting slicker by the minute due to steady falling rain, Dean Wilson found himself in the best position a racer can hope for immediately following a gate drop—in the lead with no pressure from behind. Pressure would eventually come from the likes of Malcolm Stewart and Justin Barcia, but lap after lap Wilson withstood the attacks and would eek out another gap. Then, when Stewart went down, he gained more valuable breathing room, and as the race wore on, it started to look like Wilson, who wasn’t even signed to a team during the off-season, was going to shock the racing world and win A1, as well as the first 450SX race of his entire career. Unfortunately for Wilson it didn’t last. Wilson gave up the lead to Justin Barcia in the later stages of the race, then after ditching his goggles, handed second over to Ken Roczen. At that point it looked like third was in the bag, but Eli Tomac, who’d started in roughly tenth or eleventh, was riding at a furious pace. Wilson fought valiantly, but Tomac wasn’t taking no for an answer and took over third. Had you told Wilson beforehand he’d take fourth on the night, he probably would have been quite happy with it. But to go from running first and leading fourteen of twenty laps to finishing off the podium, well, that had to sting a little bit. We’ll see if he can put his Husqvarna back up front, and for longer, next week in Glendale.

One man who didn’t leave Anaheim disappointed was Barcia, who won his first supercross race since Seattle in 2013. It might be tempting to put a muddy asterisk next to this win on account of the wet conditions, but that wouldn’t be fair or accurate. Barcia was fast all day, and in terms of mud races, this was far from an extreme example of one. The track even held up well enough for the guys to able to continue hitting all the jumps. Slick? Yes. A feet-off-the-pedals slopfest where merely surviving was the goal? Not even close. Barcia earned this one, and after watching him patiently bide his time behind Stewart and Wilson waiting for the right time to strike, it’s hard to think he won’t be back in this position again, and soon.

Second place went to Roczen, an improvement over the fourth place he logged at the opener last year, and he seemed happy, more than anything else, to have avoided having any problems at the first round.

“It’s good to get out of here with a podium in these conditions,” Roczen said in the press conference. “It can do you a favor, but it can also bite you really bad. For about half the main or so we were still jumping the big doubles and it got kind of sketchy, that’s for sure. We were doubling through a lot of stuff and it got super sloppy out there. When we started lapping riders, that’s when it got really bad. I got held up a few times and it cost me. But overall, it’s good to be in second and get out of here with a solid finish."

Tomac, who rounded out the podium in third, echoed Roczen’s sentiments.

“Man, it was kind of crazy! I actually thought it help us a little bit when it started raining. Our heat races were sort of one-lined and it was just fast enough that it was tough to really get around guys. So I thought the rain was pretty good. It kept coming down, but we were still able to jump stuff. I’m just glad to get out of here with a podium.”

Considering how rough this race has been for Tomac since joining the 450SX Class (he’s DNF’d or DNQ’d multiple times here), a podium finish, something he’d never earned at the opener in the 450SX Class, has got to be a huge relief.

Rounding out the top five was Cooper Webb, and while a fifth is a great result no matter what, Webb’s was especially impressive. The Red Bull KTM rider (along with Ryan Breece and Joey Savatgy) went down in the first turn and found himself remounting in just about dead last while everyone else was roosting away. Undaunted, Webb regrouped and put on a charge that ended with him finishing with a solid fifth. He even set the fastest lap of the race while doing it! Not a bad way for Webb to christen his maiden voyage with his new team!

Not everything was all great, however, especially for reigning champ Jason Anderson. The Rockstar Energy Husqvarna Factory Racing rider ran third early, but it didn’t take long for him to start sliding backward. Anderson wasn’t able to stabilize things either, and eventually ended up in fourteenth place. It was truly baffling, and completely unlike the Anderson we’re used to seeing. In fact, that’s worse than he finished all year last season, except for Salt Lake City, where he was seventeenth thanks to a pit stop to rectify some broken spokes. Was it nerves? Was there an issue with the bike? Unfortunately Anderson and his entire team were packed up and gone by the time we were able to make it out to the pits to ask so we don’t know. One thing’s for certain—don’t expect Anderson to put up similar numbers next weekend in Glendale.

In 250 action Colt Nichols checked a big box off the list by winning the first pro supercross race of his career. Afterward Nichols remarked on how long the race seemed to take while he was leading.

“That was the longest race of my life it felt like! But it really wasn’t too bad. We started counting down, and I was able to do a lot of motos during the off-season, which is a pleasant change from years past. I felt prepared and I felt that everything was great. With five to go, four to go, three to go, you’re kind of talking to yourself a little bit to try to get through it. I just tried to stay consistent. I didn’t know how big of a lead I had, or really even who was in second. I just tried to focus forward. I knew if I tried to relax too much I’d probably make a big mistake and crash. I just tried to keep it moving and it ended up working out for me.”

Joining him on the podium were Dylan Ferrandis and Shane McElrath, who both mentioned the added difficulty of racing in the rain.

“It didn’t seem like it was coming down too bad, but when we got into our sight lap it was quite a bit different,” McElrath said. “It was tough because you couldn’t really judge anything and that’s where I struggled.”

Adam Cianciarulo had a pretty eventful race. After nabbing the holeshot he slid off the track in the first turn. He didn’t crash and was able to get back on the track quickly, but not before a ton of riders had gone by. Not a big deal for Cianciarulo though, who went to work and sliced his way up to fifth in a matter of just a few minutes. Then things started going wrong again. Cianciarulo and RJ Hampshire tangled and they both went down, then Cianciarulo narrowly avoided crashing again in the whoops. He then started putting some fast laps down, got back to Hampshire again, but then went down again when Hampshire ran him wide as Cianciarulo was trying to make a pass. That would mark the end of Cianciarulo’s charge, and the best he could muster was fifth on the night. Not what he wanted, but not nearly as bad as it could have been, especially considering he went down twice.

Elsewhere in the class Jacob Hayes, who is somehow both a rookie and the arenacross champ, did well in his debut with Cycle Trader Rock River Yamaha. Hayes led a bunch of laps in his heat race and took a solid eighth in his first pro supercross.