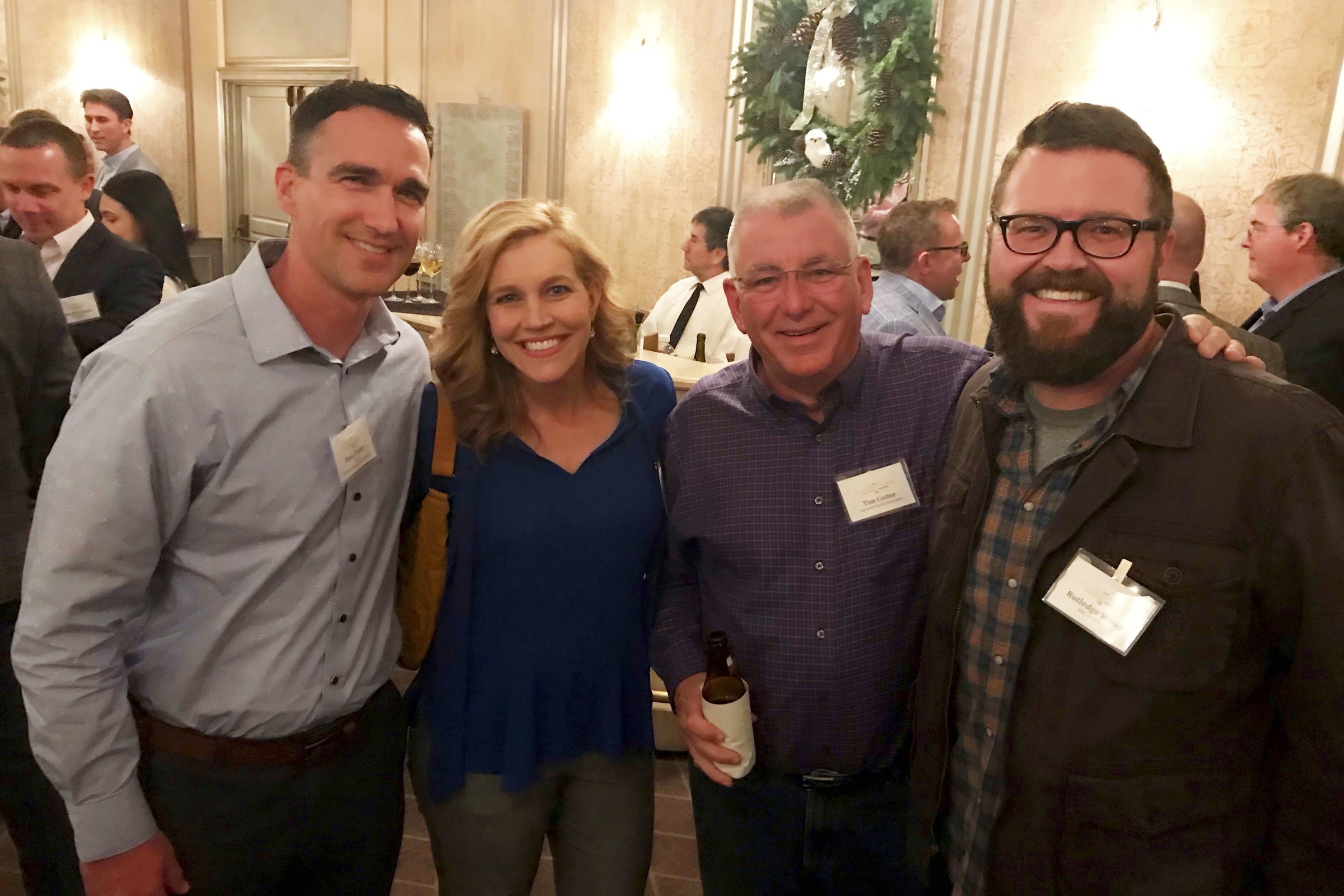 Just before Christmas, it was announced that the 2019 Monster Energy AMA Supercross, an FIM World Championship, had found a new TV home with the NBC Sports Group. We’ve been watching Lucas Oil Pro Motocross on NBC channels for years, as well as the NBC Sports Gold App, NBC’s online subscription service (full disclosure, we operate the Lucas Oil Pro Motocross Championship through our sister company, MX Sports Pro Racing, and that series has had a relationship with NBC Sports, including airing the races on NBC Sports as both a promotional and television partner for 10 years).

Racer X: Dave, how stoked are you to be part of what’s become the motorsports in America network now?
Dave Prater: We’re extremely excited about the proactive stance NBC Sports is taking for supercross and motorsports as a whole. This new approach means that our broadcast partner is taking an active interest in driving viewership and, more importantly, growing the fan base.  Like you said, it has become the home of motorsports in America. We’re just happy to be there and be a part of it alongside Lucas Oil Pro Motocross, NASCAR, IndyCar, American Flat Track, and all of the other motorsports series the network features. I think it’s going to be a great relationship. We’re really looking forward to it.

I know that with the previous network, it seemed like they would rather have mixed martial arts on a Saturday night than anything else. Did that become a point of frustration for you guys?
Yeah. Obviously the UFC is huge, and FS1 and Fox had a long-term relationship with them at the time. It could be a challenge at times. Programming schedules are a challenge, especially when you’ve got a player like the UFC involved. It was a challenge and it did get frustrating at times. Being on a network that embraces motorsports and is the number two most-watched sports network in the country [behind ESPN] is going to be much better and our time slots are going to be better. Overall, it’s just going to be a much better relationship and positioning for the sport for the future.

I remember when the motocross series was on the same network as the Tour de France and things would be going fine the first six rounds, but then we’d literally take one month off and RedBud would be shown on August 4 instead of July 4!  We’ve come a long way in not a very large amount of time.
You’re right. We have come a long way. Supercross has come a long way. Our goal is continuing to grow the sport and NBC Sports is committed to helping us do that.

I just got myself the NBC Sports Gold package for a Christmas present. I don’t get to go to all the races like I used to, but even in the summer, even if I'm at the races, I like having the Gold App because you can watch the races anywhere, anytime.
It is a good thing. I’m sure I’m going to be sitting up in an operational booth at Angel Stadium with my phone out and watching Anaheim on NBC Sports Gold. We’re extremely excited about it. I think you guys are extremely excited about it, especially the fact that fans can purchase the SX pass as well as a pro motocross pass in a package here for a limited time. $74.99 for the supercross pass or $89.99 for everything—supercross and motocross—which is pretty amazing. Obviously, we’re still on a television network—I think there’s been some confusion out there. You can watch us on NBC Sports Network as well throughout the season.

Well, they’ve been a great partner I know for motocross certainly. On NBC Sports Gold you get to watch the practice and qualifying, they go all in. You’re going to have wall-to-wall coverage beginning with the afternoon qualifying.
Definitely. Race Day Live was created for the uber SX fan and now it’s going to be a full-on television production from 12:50 with the first qualifying sessions all the way through to the checkered flag and the 450 podium. It’s definitely an extremely exciting new relationship and I think fans are going to be amazed at what NBC Sports offers this year. If you’re watching on TV it’s going to be the entire show from the first 250 heat race all the way through to the 450 main on NBC Sports Network. We’re going to have some strong lead-ins and lead-outs on the network. Supercross, NASCAR, IndyCar, Pro Motocross, and everyone else, the who’s who in motorsports in America all on the same network.

I know one of the pre-existing deals that came into conflict was the Rolex 24 Hours of Daytona and there’s no way around that. That’s the Super Bowl for that kind of car racing. But I think after your numbers come in this year, I have a feeling there’ll be some revisiting there…
Yeah, the Rolex 24 is on the same Saturday as Oakland, so Oakland is the one next-day delay on the network. It will be 3:00 p.m. Eastern on Sunday. Thirteen races will air live on NBC Sports Network with only three delayed an hour or so, which is consistent with what we had previously with Fox Sports. If you want to see the four others live, get NBC Sports Gold and you can see everything in real time. You can see every lap of qualifying as well as every lap of the night show, something that we couldn’t offer with our previous broadcast partner.

Is it too early to talk TV talent or are you guys still working through that?
We worked through it, and I would talk to you about it, but NBC wants to be the ones to release that. Probably in the next week or so.

I know how that goes. You have your favorites, they have their favorites, but we’re fortunate right now. We’ve got a lot of guys that would make good broadcasters. I did an interview with Chad Reed recently about his new JGR Suzuki deal and I was thinking, you know, when this guy is done racing, and that might not be until 2025 at this rate, Chad Reed would be great on TV. I already know that Villopoto is good too, and the guys that are doing it now are all really good too. If you’re a supercross/motocross fan, there’s a lot of voices that could show up there that are going to be pretty cool.
For sure. I agree. It’s funny you mention Chad because he was in the office a week or two ago and I brought it up to him. Not for this year, but obviously in the future when he finally does decide to retire which you’re right, it could be 2025 or beyond, but he says that’s not in the future—he’s going to retire and ride off into the sunset, and maybe the fans can sway him or maybe he’ll change his mind! Villopoto or Dungey, who was with us for a few rounds last year as a guest, we’ve got a lot of talent out there that I think could do a great job as a broadcaster in the future. We’re excited about that too.

Speaking of riders, I saw when you guys had your media day recently with the riders at Angel Stadium, and I also saw that the FIM came to talk to the athletes and teams about doping, anti-doping, and really trying to help make sure that everyone kind of knew any questions that they had, any concerns. That was a pretty cool deal and I’m sure everyone appreciate their presence.
Yeah, it was great. With James [Stewart] a few years ago and now with Broc [Tickle] recently, we along with the FIM wanted to make sure that the riders and the teams were as educated as possible on the procedures and what they need to do and who to contact if there’s an issue, and just the entire protocol of it all. The FIM flew their chief medical officer out to Angel Stadium and we were able to tag it onto our media sessions. We were out there with NBC Sports Network getting headshots, bumpers, interviews, and doing some media training as well with the riders. After that Dr. McManus with the FIM gave a complete anti-doping briefing. It was a nice step in the right direction.

Speaking of Anaheim Stadium, we’re literally seven days away. You’ve got Jason Anderson ready to pull out the number one plate. Eli, Marvin. Chad’s back. Roczen. Obviously these four incoming 250 riders. How stoked are you on 2019?
We were just talking about it yesterday. When you add those four rookies in—[Justin] Hill, [Aaron] Plessinger, [Zach] Osborne, and [Joey] Savatgy—I don't know that we’ve ever had four rookies of that caliber enter at one time. Add those names to the Anderson, Marvin, Eli, Roczen, Reed… It’s a strong field. I’m looking so forward to Anaheim as well as the entire 2019 season. I don't think anyone can really predict it at this point.

Like I said, I got myself the NBC Sports Gold SX/MX package for Christmas. I strongly suggest everyone do it right now as well and get that discount. And welcome to the NBC Sports family, Dave. From the motocross side of it we’ve been incredibly happy with them and how they promote us and involve us. To be on the same network with supercross, we’re thrilled and hope that it will be  a big lift for all of motorcycling in general. The NBC folks, they’ve staked this territory out. They are the new motorsports home in America.
I think it’s going to benefit both supercross and motocross and it’s going to elevate the sports that much more. It definitely benefits the fans to have motorcycle racing year-round on a single network. We couldn’t be more excited about it. It should be another great season for Monster Energy Supercross and most importantly for the fans.