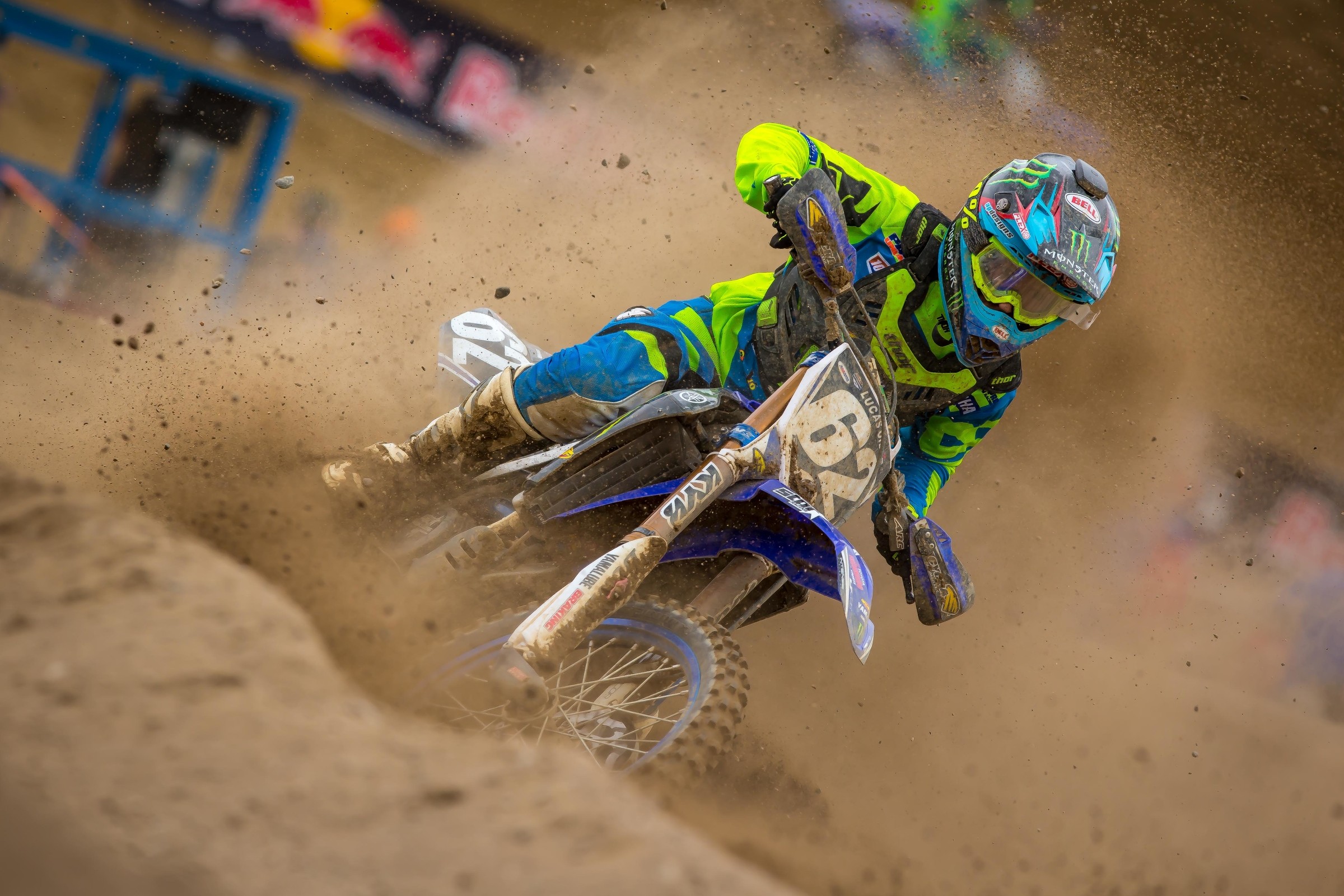 On the Saturday morning of January 6, 2018, this writer was walking through the pit area for that night’s season-opening round of the Monster Energy Supercross at Angel Stadium when I came across rookie rider Justin Cooper. Set to be his pro supercross debut later that night, one could tell the native of Cold Springs Harbor, New York, was wide-eyed with the new reality of his surroundings.

“This is my first professional supercross,” he explained shortly before practice was set to begin. “I’m excited to finally be here. I want to get some experience tonight and see where I stand. I’ve been blessed with this opportunity with this [Monster Energy/Yamalube/Star Racing] team and this is what I’ve been dreaming of since I was a little kid. It’s crazy to finally be here. I’m excited to get out there and leave the nerves behind.”

Some 14 hours later and his race run, a race in which he charged back from an opening lap yard sale crash to ninth. “It was awesome, to say the least. It didn’t go the best or as smooth as I thought it would, but I definitely got a lot of experience. It was the experience of a lifetime.”

As we all know now, one week later Cooper would hit the ground at Houston, immediately ending his supercross run for the year, but then came the Lucas Oil Pro Motocross Championship and he put together a spectacular season, which undoubtedly makes him a title contender in 2019. But first there is the 2019 Monster Energy Supercross Championship to run and Justin Cooper is ready, willing, and able to start it all off with a bang. On Christmas Eve, Racer X talked with the 2018 250MX Rookie of the Year.

Racer X: Hey, Justin. Thanks for the time in doing this interview with us. Where are you hanging out this holiday season?
Justin Cooper: I’m in California full-time now.

Where are you living out here?
Lake Elsinore.

Ah, cosmopolitan Lake Elsinore… A little bit different this time of year than, say, New York, eh?
Yeah, it’s basically the polar opposite. I like it more on the East Coast, but it hasn’t been bad. I wouldn’t say it’s terrible, but I’m more of an East Coast guy.

I came to Southern California when I was about the same age as you. It took me a long time to get used to every day looking identical and, as I’m sure you’re finding out, not only does it rarely rain, but there are no real seasons out here.
That’s probably the biggest change, yeah. Not seeing rain took a while to get used to. But I am going to go back home this week for a little bit. I’m actually going to go visit my girlfriend’s family in Arkansas. That’ll be pretty cool to change it up, I guess a little bit. It’ll be good.

Does your girlfriend like motocross?
Yeah, her brother raced. She pretty much followed her brother all the way through it. Not much has changed with her!

How’s your off-season been?
Awesome. I’ve just basically been working on stuff with supercross. We’ve been breaking sections down and just trying to get the most out of each place on the track because the racing is so close. We’ve been working on specific stuff, like my weaknesses I guess you could say. It’s been working good.

Anaheim 1 was the only supercross you made it through in 2018, so you’re not super well-versed on the stadium stuff yet, are you?
I was prepared, but I didn’t get the racing experience. That was the only thing that I was missing there. Yeah, we’re just putting a lot more together this year and working a little bit closer on stuff to just get that much better. We all train with Gareth Swanepoel, so we’ve all been working with each other and everyone on the team is helping everyone. It’s been good.

Learning supercross doesn’t sound like an easy thing to do for a younger rider, no matter how good they are. Thoughts?
Yeah, you start with the basics and you ride the track and then you just break down your weaknesses. If you’re struggling compared to your teammates, that’s when you want to start breaking down your weaknesses. That’s the most important part of it all. You just need to put everything together and that’s what we’ve been doing this year and it has been good and it has been helping me a lot and it has been helping everyone on the team.

You and I talked the morning of your first professional supercross race, and that race just happened to be the season-opening Anaheim Supercross. Talk about being thrown into the deep end. What a difference a year makes, huh?
It really does. I’m a lot more comfortable coming in this year, I think. I know what to expect this time and I really think that things are going to go much smoother this year. That’s what I’m excited for. I’m already [feeling] comfortable on the bike and I have had all this extra time to really just buckle down and focus on the team and to be able to rely on the team and all of its experience to help me that much more. We’re in a good spot right now and we still have a little time to go before we start up.

Down deep, did you think and believe you were going to do as well as you did in the Lucas Oil Pro Motocross Championship?
Honestly, I didn’t think I was going to do that good. I expected myself to be up there and to be battling like that, but I didn’t really expect myself to be a podium guy every weekend.

Yes, I mean you picked it up immediately. I was around you at the Glen Helen National and I watched everything you did out on the track and it was really impressive. You just went out and charged it. From then on, you were running up at the front all summer long. Thoughts?
Yeah, it all came really quick and it just came with the team’s help and working on things that I knew needed to be worked on. It’s hard to have the mindset that you’re just going to go in there and crush them when you have all these guys that are past champions in the class. They’ve all been doing this for many years, so they know what to expect. I didn’t, so it was hard to put the expectations that high, but I definitely didn’t put it past myself, though, and I think that’s why I did so good, so quickly.

I did an interview with Mitch Payton recently and he spoke about you and how impressed he was with how you’d go out for practice or timed qualifying and immediately be up at the top of the timing and scoring monitors.
Yeah, I think that was probably one of my strong points. I think I qualified first at half of them, so I definitely have the speed, I guess it’s just experience. It was just the experience of going through the whole outdoors and we had a good and solid year there, so next year we’re going to come in and know what to expect at each and every round and hopefully be that much better.

Could you feel yourself getting more and more confident, as well as creating a bunch of new fans, along the way?
Yeah, it was amazing to see all the feedback I got from everyone and all of the fans would make positive comments after each showing. It was cool to see and it just made me that much more pumped to go out there and do it again. You know, it’s really tough mentally when you don’t back up a good performance. It makes you wonder what you did wrong and you have to go back and kind of analyze what happened and what you need to work on to get back up there quick.

Have you formulated any sort of internal battle plan of how you’ll attack the new season yet? I mean, you know you can win now. Not a lot of guys, if they’re honest with themselves, have that same confidence.
For sure, I’m going to be putting myself up front. That’s where I want to be, that’s where everyone wants me to be and that’s what I expect of myself, so we’re going to be shooting for the podium range. I’m not going to get ahead of myself yet because I’ve done only done one supercross race, so I can’t just go out there swinging. You can, but you have to do it safely and [be] smart because I want to make the full season. I think that’s the most important of it all for me in 2019. Yeah, we’re just going to go out there and the first round and see where we’re at. We’re going to come in as prepared as we can and like I said, I think we’re doing pretty good and that we’re at a good point with everything right now, so we’re just going to buckle down these next few weeks and fix the things we need to fix and hopefully come in as prepared as we can. We’ll see where I’m at come the first round and then go from there.

Going back to that first supercross you competed in last January, you rode really well that night. Do you remember it all well?
Yeah, I put myself in really bad positions. My starts weren’t that great, but I felt like I rode great and that was important to me. But yeah, the first race nerves got to me. It’s just a whole different thing once you get to that stadium. It’s hard for a rookie. I thought I did good.

Last question before we let you get on that jumbo jet and get to your girlfriend’s place for Christmas: What were the biggest things, good or bad, that you learned through racing in 2018?
Uhm… That’s a tough one. I can reinforce the fact that starts are key. That’s for sure. You have to have a stable mind out there. You can’t let things get to you. You just need to keep the ball rolling and doing the best I can, I guess you could say. You have to always believe in yourself and believe in your capabilities. You just have to make sure you don’t lose that confidence because once you lose that confidence, you’re not going to do too good out there. You know, I got that ride with [Monster Energy/Yamalube/Star Racing] and then it was like, “Okay, what can you do out there?” I had to go out there and prove myself and I [feel] like I [will] show what I have this year. Everyone kind of respects me a little bit more and I’m a vet now, so that’s how it all came on for me this year.