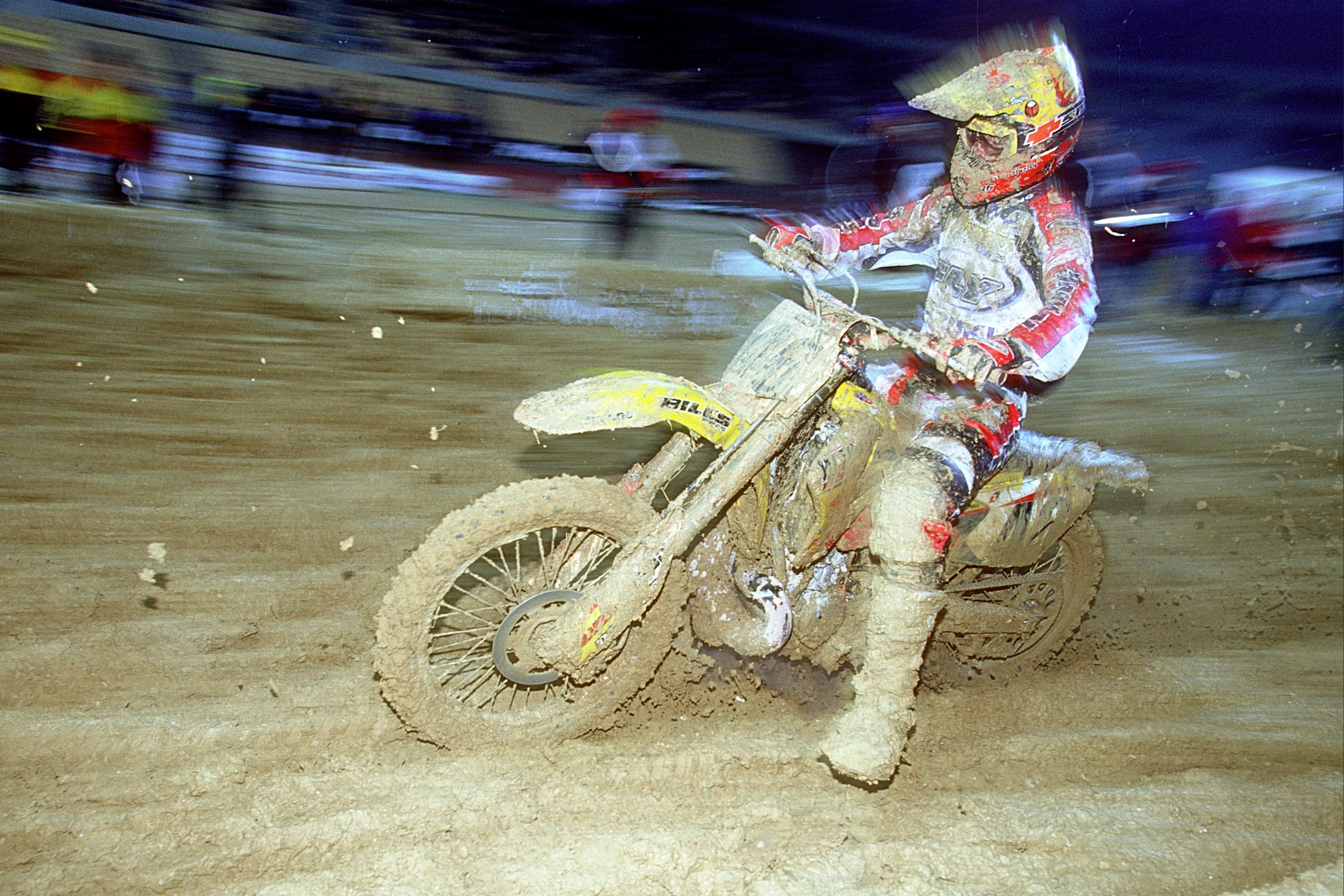 On This Day in Moto December 6

December 6, 2003, gets it's own entry here, because nothing in moto ever happened on a December 6 that was more memorable (or forgettable) than what happened on this day in 2003. I know because I have been around for my fair share of December 6's, and none of them really even spark a memory like what happened 15 years ago in Seville, Spain.

It would be way too hard to try to explain the chain of events that began in November 2001 that led Clear Channel and the FIM to have a THQ World Supercross Championship race in Seville, Spain, on December 6, 2003. It would be even harder to explain why the only U.S.-based factory riders that would participate were Honda's Ernesto Fonseca and Red Bull KTM's Grant Langston. Even tougher would be to explain the podium of Daryl Hurley, Langston, and the late Tyler Evans.

What I can explain is that it was the single wettest, muddiest race I have ever attended, and I've been at some real doozies: Daytona '08, Ironman '18, Foxhills MXON '98, Anaheim '05, Budds Creek '09, several Unadillas, and every Loretta Lynn's and Blackwater 100 that ever happened. Seville was just simply remarkable. It rained, and rained, and rained... For six days. The once-pristine, pre-built stadium track looked like a bowl of chocolate pudding, jumps melting in the rain before everyone's eyes.

There was talk of canceling the race, but then Clear Channel's Charlie Mancuso, Todd Jendro, and Ken Hudgens all stepped in to ask the riders that had gone all that way to reconsider. They didn't—at first. Then Roy Janson was tasked with a "race one for the Gipper" riders' meeting speech and reminded them that years from now, no one would remember that it was muddy, just that someone's name was in the record books for winning a round of World Supercross in Spain. He was partially right... Hurley is remembered for winning a WSX round, but it takes some digging to make sure!

The track was so muddy there was literally no practice, but the live network TV window was not going to go away, and Roy and the rest of the Clear Channel brass were able to convince everyone that it was worth the trip to Spain to do this thing, and they were right. Everyone who raced will tell you they survived something extraordinary, special and kind of fun, though it's now all mostly lost to history.

For instance, Cameron Steele and Jamie Little and I called the race, but there's no video to be found archived online. (If anyone can find a link, please post below in the comments!) Racer X Illustrated covered it through the photos of Steve Jackson, but he didn't shoot much more moto after that because he needed all new equipment! It was also the one and only premier-class FIM Supercross podium for Hurley, Langston, and Evans, though the results are not in The Vault because the series were split then (which is why the big-hitters—Reed, Windham, Vuillemin, Ferry, Carmichael (who was hurt), McGrath (who retired), LaRocco, etc.—weren't there).

But for those of us who were there, from the racers to the promoters to the journalists to the broadcast team, it was an unforgettable race. So here's to the rain in Spain, and the one and only THQ World Supercross ever held outdoors in Europe in December....

Matthes, can we get a podcast going on this? I think Langston, Hurley, Todd, and Roy and Ken, myself, and Cameron and Jamie have a lot of fun and funny (and wet) memories of the shitshow that was December 6, 2003!