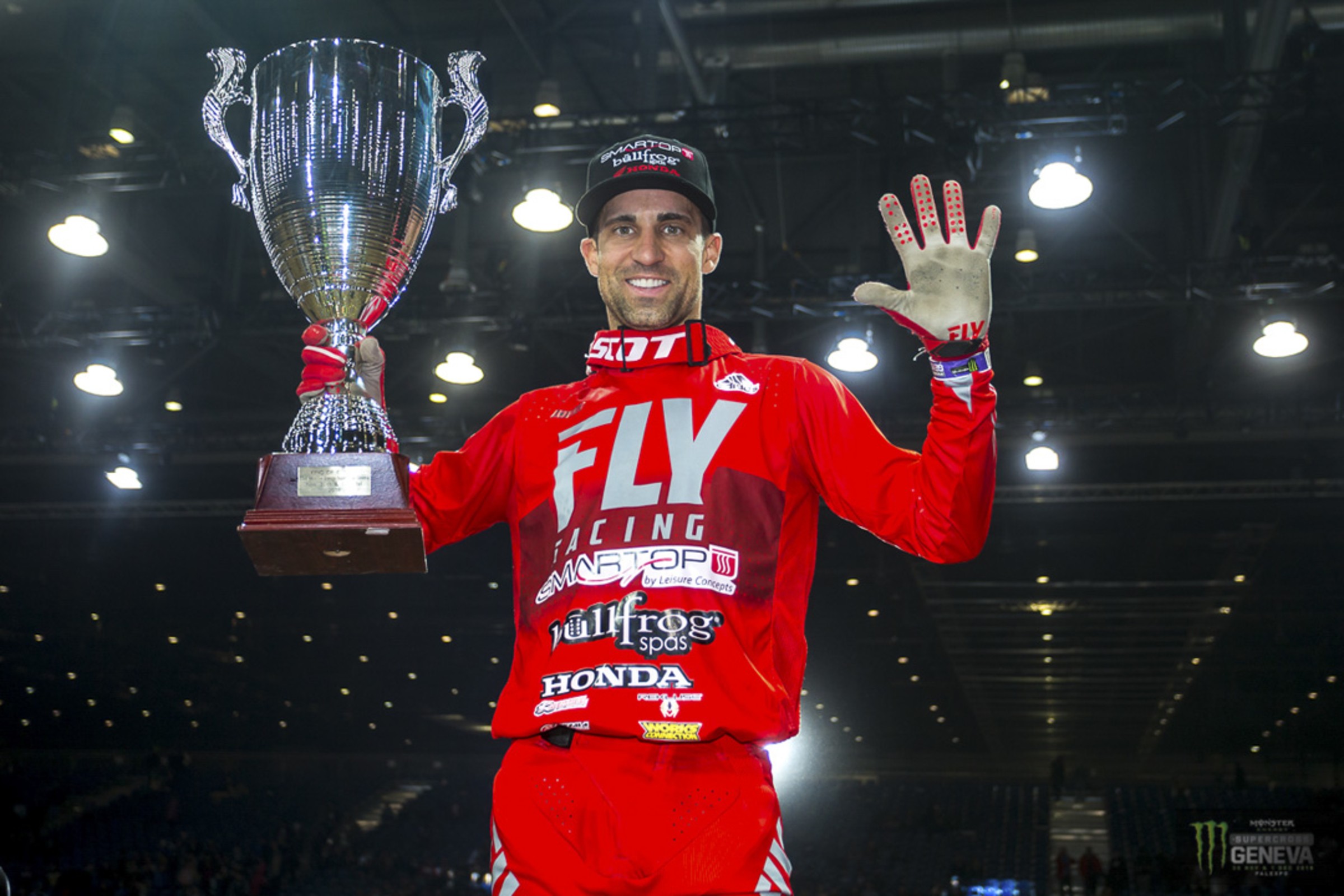 This weekend in Geneva, Switzerland, has been a weird one. From a bunch of riders losing their suspension and gear to Malcolm Stewart basically having to learn the track while he sat on the line for the LCQ to both leaders in the two mains crashing on the last lap with victory in their sights, it was something else.

Night two wasn’t normal either. First up, Rockstar Energy Husqvarna’s Zach Osborne, the leader last night until he threw it away on the last lap, had a seat come off in his heat while winning and ended up third. This made him go from the number one gate pick to the sixth gate pick for the main event. Osborne chose to go inside and pulled off a great start in the main. Unfortunately, he was too far inside to make the turn the way he wanted to, drifted wide, and got plowed into. His night was done. It was still a great weekend for Osborne, though, as he showed great speed.

Smartop/Bullfrog Spas/MotoConcepts Honda’s Malcolm Stewart continued to have bike problems all day long and outside of a brief three or four laps of raw speed in the heat, he was done. Unfortunate for him and his fans. Here is what he had to say about his night on Instagram:

As much as it sucks to say my night was done early. We had a black cloud over us all weekend. Everyone tried there best to get me back out there. Just luck wasn’t there, sorry to let you guys down. It just was out of my hands. Overall i had a lot of fun being here crowd was awesome. Great vibes! See you next year!

In the duel race which took the top two in each heat, it was GEICO Honda’s Christian Craig and Monster Energy Yamaha’s Justin Barcia in the final with Barcia taking the first race win. They lined up again and this time it was Craig with the holeshot but seeing an opportunity, Barcia drove it in hard and took both riders down! From there they struggled a bit to get up but Craig took off with the win. His bike was tweaked and a disc was bent and Barcia had no clutch lever. So that was it, the duel race was called at 1-1, with Craig getting the win. It was bizarre and left Craig heated, but he talked it over with Barcia and everything got smoothed over. International races and Justin Barcia usually equal chaos.

With all that over, the gate dropped for the main event and after Osborne and KTM’s Jordi Tixier went down it was Justin Barcia out front with Craig in second. At that point it was Craig who was going to win King of Geneva with a 2-2. Justin Brayton, who won the first night, was in sixth. Vince Friese was further back and Honda HRC’s Cole Seely was down in the Osborne carnage and had to pull into the pits to get his bike straightened out.

Then Brayton started getting busy. As Craig said “he came out of nowhere” to gain a lot of time on him and made the pass relatively easy. After that the veteran, going for his fifth King of Geneva title, chased down Barcia as the lappers got involved. Brayton got right onto the rear fender of the Yamaha rider at times but couldn’t make the pass. Brayton mentioned that he was looking for a mistake by the #51 rather than try to force something with a rider that isn’t scared of contact.

Meanwhile, Seely, who had pulled out in front of Barcia and was four or five seconds from being lapped, pulled AWAY from the leader and started gathering in the rest of the pack. Seely showed great speed all weekend long but doesn’t have much to show for it. A sixth place was the best he could do on the night.

Brayton blew a rhythm section late in the race that allowed Barcia a couple of seconds of breathing room and he went on to take the win and third overall after a poor start left him in the back last night. Brayton took second and King of Geneva honors. It’s his fifth King of Geneva crown. It was another European performance by Brayton that saw him rise up and get better as the weekend went on. Craig finished third and used great starts and whoop speed to end up second overall on the weekend.

In the SX2 main event it was Cameron McAdoo who again had to work up from a so-so start to take the win, passing Thomas Do about halfway through the race. From there he took the win, a 2-1 finish on the weekend, and the Prince of Geneva trophy. Brayton and McAdoo are buddies and both from Iowa—good things were happening in Switzerland this weekend for the Hawkeye State.

This weekend was still a success for riders like Seely and Osborne as they showed speed. It was success for Craig (duh) and even Barcia. But none of them walked away with the overall trophy; it was Brayton, the veteran, that showed everyone why he’s enjoying this great second act of his.