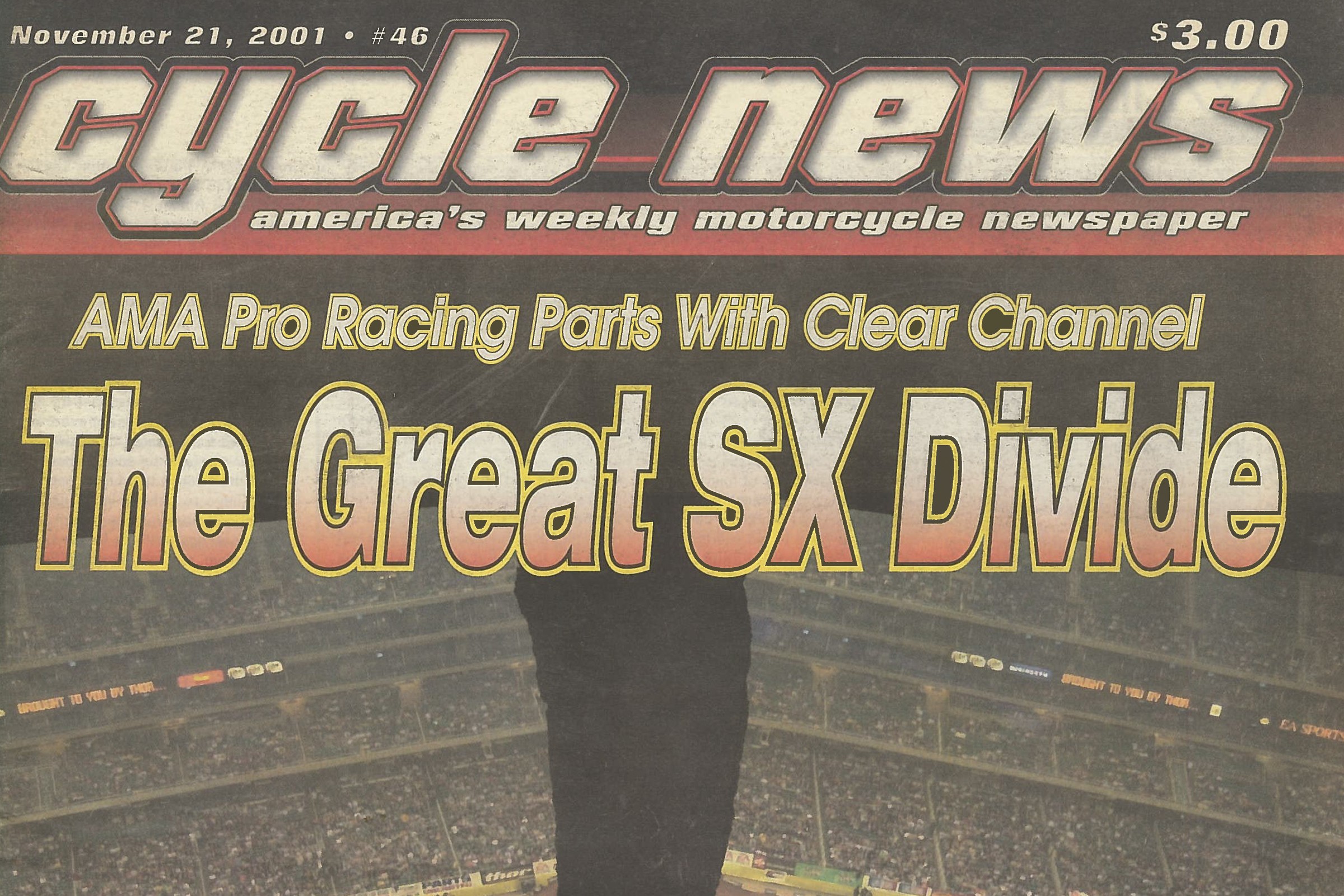 On This Day in Moto November 29

Cycle News referred to the topic of the time as "The Great Supercross Divide," a civil war that began a month earlier when the AMA announced that they could not come to terms with SX promoter Clear Channel, so they were going to bring a new Chicago-based company called Jam Sports to organize a new AMA Supercross Championship.

The move caught many in the industry off-guard and led to a long and expensive court case that was far too complicated to explain here. What we can explain is the aftermath of this civil war. The AMA and Clear Channel finally did get back together, Jam Sports never held a single event but won a hefty settlement for anti-trust with Clear Channel, the series ended up with two sanctioning bodies—the AMA and the FIM—and what we now know as Monster Energy AMA Supercross, an FIM World Championship.

It's why the series would end up racing in Switzerland, the Netherlands, Spain, and Canada, why we have WADA and USADA... Eighteen years after the schism, the effects of "The Great Supercross Divide" are still with us, but fortunately it remained one series back in 2001 and '02 and we didn't go the CART/IRL route that basically killed open-wheel racing in America.

We explained it in great detail on the Racer X Exhaust podcast, which you can listen to below:

It wasn't until this day in 1982 that the 1983 AMA/Wrangler Super Series Grand National Championship was made official. The delay was in combining the existing AMA Supercross Series and it's various promoters (Mike Goodwin, Mickey Thompson, Allen Becker, Bill West, Jim France—this was pre-Feld Motor Sports—with the myriad outdoor promoters (this was pre-NPG, pre-MX) so that the points would all count toward one championship that would combine points between SX and the three outdoor classes: 125, 250, 500.

The more difficult problem, however, was settling the ongoing litigation of anti-trust between the AMA and Honda, Yamaha, and Suzuki over the demise of the international Trans-USA Series, which lived from 1970 to '82 before the four OEMs all decided that they no longer wanted to participate in that series, and focus more on the growing AMA Supercross and AMA Pro Motocross domestic tours.

The eventual AMA/Wrangler Grand National Champion would be David Bailey of Team Honda, and he earned the honor of wearing a Wrangler-inspired blue number plate with a yellow #1 in 1984.

And of the eleven outdoor nationals on the '83 tour, five are still on the 2019 Lucas Oil AMA Pro Motocross Championship: Hangtown, High Point, RedBud, Washougal, and Spring Creek. Gone are the rounds at Saddleback, Gatorback, St. Louis, Broome-Tioga, Lake Whitney, and the old Lakewood round in Colorado.

Here's a film Peter Starr made for Team Honda on the drive to the 1983 Wrangler Grand National Championships:

Yamaha's David Vuillemin wraps up the King of Bercy title with another win on the final night in the Palais Omnisport, the capitol building of French Supercross.