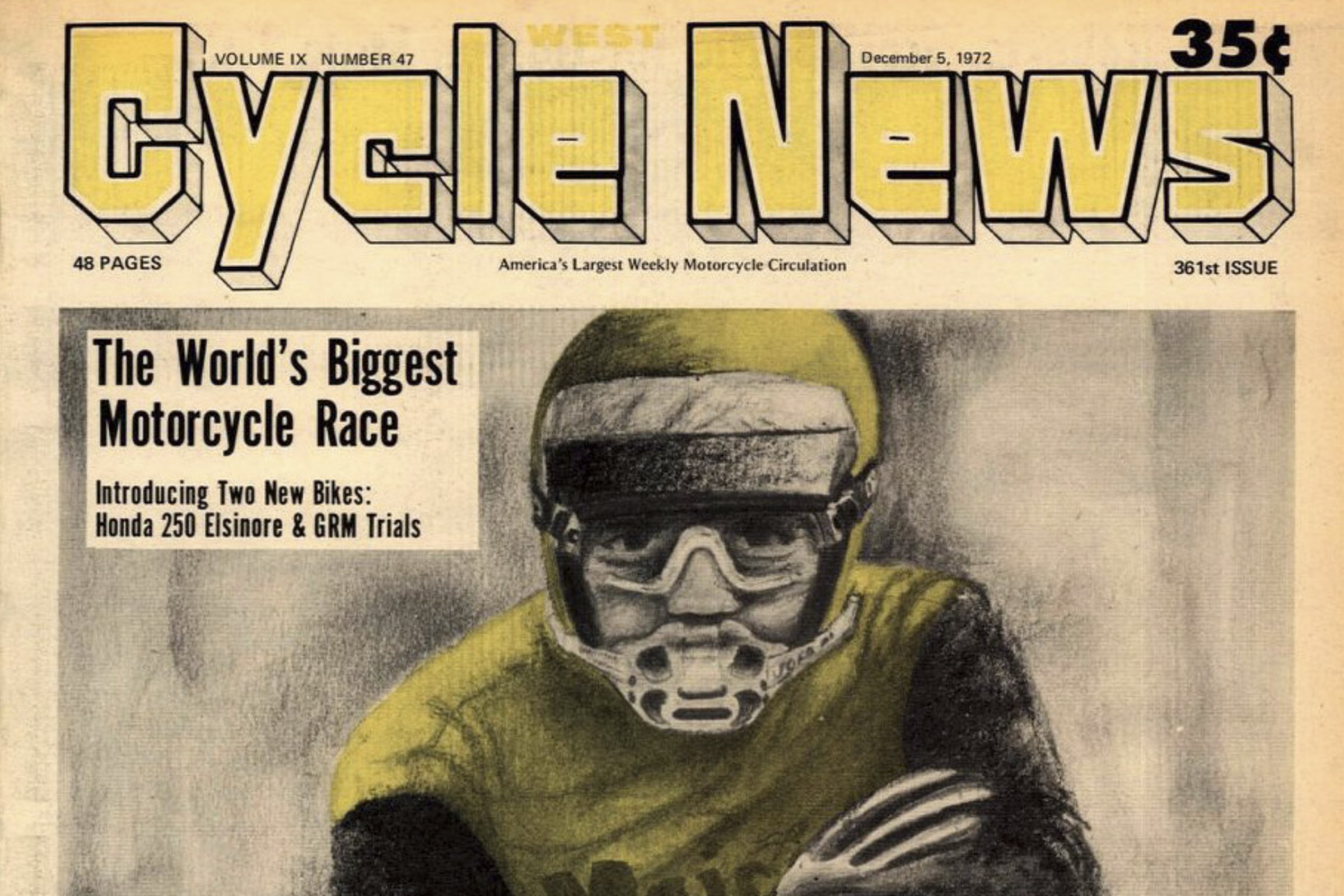 On This Day in Moto November 26

At Livermore in Northern California, Swedish Maico rider Ake Jonsson kept his winning streak going yet again in the Trans-AMA Series. Jonsson would close out the series with nine straight wins as well as the title. By this point the competition had partially given up, including Finnish Husqvarna rider Heikki Mikkola, who had beaten Jonsson in a moto the week before at Puyallup, Washington, on a borrowed bike—his van and all of his gear and both of his bikes had been stolen one night before the race. By the time of Livermore, Mikkola was back home in Finland. Suzuki's Roger DeCoster finished second and the top American was fourth overall Brad Lackey on a prototype Kawasaki.

Here is a cool Cycle News cover of Ake Jonsson, who had already clinched the Trans-AMA title by now.

Here is an ad that appeared in Cycle News for Malcolm Smith's signature company.

The Phantom Duck of the Desert, a riding activist in disguise, once again thumbed his nose at authority by helping organize a third annual Barstow-to-Vegas trail ride that emulated the once-great race that had been lost to land closures. In 1974 the Bureau of Land Management decided to stop the huge Hare and Hound race known as Barstow-to-Vegas. After much protest from motorcyclists and other land-use advocates, the BLM went ahead and gave the race a permit, with some restrictions of where the race could run and how wide the course could be. An estimated 3,000 motorcycles and 10,000 fans turned out to watch. But then after the race the environmentalists and land-use opponents showed to measure the damage to the course when 3,000 riders were funneled into the same trails, and it was apparent that the BLM's attempt to control the race had actually failed. So in 1975 they just flat canceled it all together.

That's when a "phantom duck of the desert" showed up and organized a 100-rider protest parade of dirt bikes. It went on in '76 and '77, and grew. And then the race was reinstated in 1982, with more restrictions, though the identity of the Phantom Duck, now an off-road and land-use hero, was reveled in a court case. His ride was canceled, but the fight went on until the race was soon allowed again, at least for a few more years.

If you want to read more about the Phantom Duck of the Desert, forty years later, here's another article we found that you might enjoy.

The 44th Annual Thor Winter Olympics wrapped up with the likes of Austin Forkner (250 A, 450 Pro Sport), Jalek Swoll (Supermini 2 13-16), and DJ MacFarlane (250 Pro Sport), among others, capturing championships.