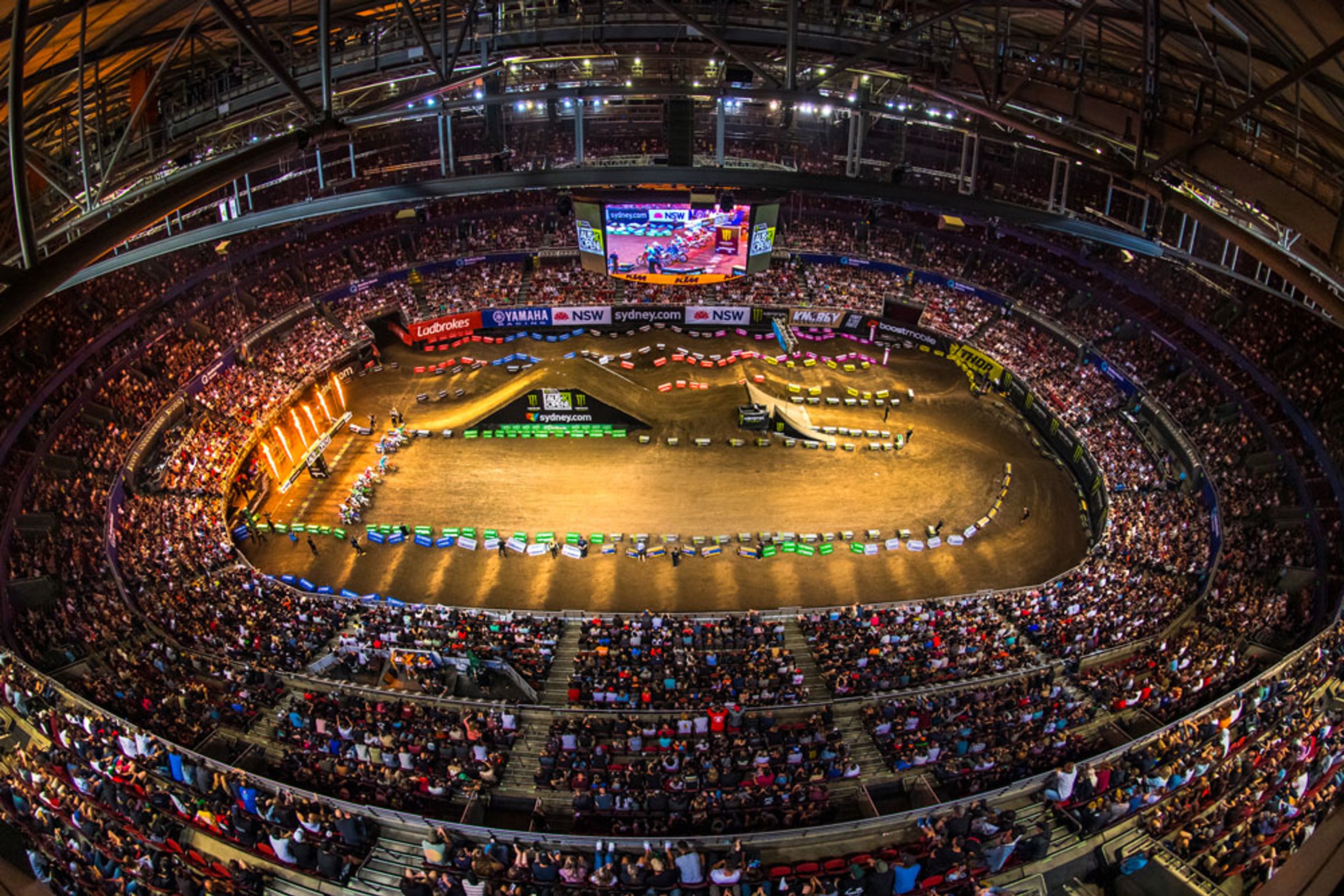 The Monster Energy AUS-X Open in Sydney has concluded for yet another year, and the 2018 edition marked the fourth installment of the event since it first burst onto the international radar in 2015. This year’s event also served as the fifth and final round of the Australian Supercross Championship—where both SX1 and SX2 champions were crowned—as well as the opening round of the all new FIM Oceana Supercross Championship, which is a two round series and is set to conclude inside Auckland’s Mount Smart Stadium on November 24.

The AUS-X Open event is quickly becoming a staple amongst riders worldwide, with the scheduled event posted up right at the beginning of the Australian summer, and for 2018, Sydney sat at 82 degrees for the majority of the event. It gave the chance for Australian hero Chad Reed to teach his family how to surf at the famed Manly Beach, while Jason Anderson, Dean Wilson, and more hopped aboard the pre event yacht and toured the Sydney Harbour.

Defending AUS-X Open Champion, Jason Anderson, once again took a trip Down Under, and it’s safe to say that the 2018 Monster Energy Supercross Champion is in blistering form, with the 25-year-old being visibly superior on the weekend. Anderson topped all but two sessions—Friday’s practice and Superpole—en route to a second consecutive victory in Sydney.

While commuting between PR commitments and driving Anderson and his team to and from the venue in a golf cart, I chatted with the Monster Energy Supercross Champion and got his thoughts on heading down to Australia in the summer.

“Dude, I love coming to Sydney,” he said while in the back of a golf cart. “It’s so sick to come down and everything just be so chill—our series is business and that’s understandable, but to get down here and be able to race and chill is cool.” Despite his relaxed demeanor off the bike, Anderson was still in beast mode both on and off the bike, sticking to his strict training program while Down Under.

“I just finished a run around the Olympic Park that we’re staying at, and it’s funny, nowadays I kind of look at something like that and the motivation is there straight away. I remember when I first entered the pro ranks, I would literally procrastinate all day before I’d go on my half hour run—it was pretty rough,” he said.

Another interesting discussion was held later underneath the Sydney Harbour Bridge, where Anderson met Chad Reed for a newspaper interview and photo shoot two days out from the event. The two discussed moto, the industry, and Australia while they waited for the photographer to show up. During the discussion, I raised how the current scope of riders racing supercross is interesting in the fact that there isn’t any “one guy.” We had MC, Ricky, James, Reed, RV, and Dungey and now it’s somewhat blank, even though Anderson is the 2018 champ.

“Yeah, but where are you getting that from—just pulling it out of your mind?” retorted Reed. I answered yes and proceeded to ask him how he saw it currently.

“Yeah, I guess I agree. Both Jason and Eli [Tomac] are fast, but I can see where you’re coming from,” finished Reed.

“I agree too,” chimed in Anderson. “I think that I probably need to be in it for a few more years before I get to the kind of stature that those other dudes are at.”

At this point I brought up Tomac’s pace as well as the inconsistency, along with the fact that he seems like a guy who turns up, races, and that’s all. He’d prefer that all media commitments are non-existent.

“Yeah, I’m not sure. I’ve tried to chat to him a couple times but I never really get much,” replied Anderson.

“What’s up?” replied Anderson, which prompted a laugh between all three of us. Then it was Reed’s turn to weigh in.

“Eli is pretty much like that, but so was RV back when he was at the top of his game. You wouldn’t get a whole lot out of him, now he’s a legend.”

Friday was the first round of business, with practice and qualifying getting underway in the late afternoon. Current series leader Justin Brayton topped the time sheets convincingly, spending the majority of the session a full second up on second position, which is sizeable on a 30 second lap time. Dan Reardon was second, with Wilson, and Anderson following. Reed spent most of the session making adjustments to the bike as he didn’t look too comfortable early on, with mechanic Ben Schiermeyer making suspension tweaks. He went on to finish seventh.

After practice, the athletes headed back to their rooms inside the stadium (rooms of which Elton John, Snoop Dog, John Cena, and more had occupied at some point in time) and debriefed with their team and each other. Quickly thereafter, Dean, Brett Metcalfe, Reed, and his mechanic were all hanging out in Chad’s room, while they discussed practice.

“Brayton is so fast at this sort of racing, man. He kills it,” commented Reed.

“Have you seen his schedule for the off-season? He’s raced the Australian series, and then he’s off to Paris, back to New Zealand, then Geneva and Italy, back to the United States—that’s gnarly,” added Wilson.

“Yeah, it’ll be interesting to see how he goes come A1,” finished Reed.

In terms of SX2 on Friday, championship leader Jay Wilson had a big crash that saw him plummet into the metal ramps. He got up eventually, logged the fourth fastest time, and then headed back to the truck. Going into Saturday, he held an 11-point lead over Hayden Mellross.

The main show on Saturday began at 6 p.m., meaning there was quite a bit of time throughout the day (all of which is usually taken up by PR duties) until the racing began. Riders were in full swing during the pit party, as well as discussions with the team and members prior to the event getting underway. I managed to make it down for track walk, where I came across Jace Owen and discussed the comparisons between the Qudos Bank Arena circuit and arenacross, along with the closing of Amsoil Arenacross.

“This track here would be right bang in between arenacross and supercross,” commented Owen. “There’s a couple rhythm lanes as opposed to just the one in arenacross, along with going out in the tunnel—that’s what makes it a decent size.”

“On the subject of arenacross, why did it shut down? There were some big teams, sponsors, and the turn outs look decent—why’d they stop?” I asked.

“It’s just one of things I guess,” he said. “For me, I think that they did get a good turn out when the series was in the big cities, it was just more when we’d go to the smaller cities that there wouldn’t be a whole lot of people there unfortunately.”

“And what about the chase format? That’s a format that literally resets points after a certain round, right? Sounds like it makes no real sense…,” I asked.

“Yeah, I agree,” he said. “And for me, the year I was in the championship, my bike broke the first round it reset, which pretty much dashes your hopes of a title.”

The night show kicked off at 6 p.m. with pyrotechnics, rider intros and the like. There were a bunch of races like the Celebrity Challenge, Two-Stroke Cup, and KTM Junior Challenge, which were all pretty cool in their own right. For the big boys, Reed and Anderson won their heats, with all the big guns following in tow to make it into the Triple Crown main format. For SX2, following his crash on Friday, Jay Wilson was banged up, and managed to grab the very last qualifying position. Hayden Mellross breezed through to the final, with Cameron McAdoo looking very fast.

Throughout the SX1 class’ three finals, Anderson was the clear favorite. The intensity that he brought to the racetrack was unrivaled by anyone else, and his starts were also good. He went on to win all three (Reed actually crossed the line first in the final race, but used the shortcut lane twice, and subsequently lost five positions), and etched his name into the AUS-X Open trophy for a second-consecutive year. Wilson made a successful return to racing after six months out, logging a 3-3-2 scorecard that was good enough for second overall. Reardon finished in third, Brayton fourth, and Reed fifth.

Heading into the night, Brayton held a six-point advantage over teammate Brett Metcalfe, and he eventually captured his third consecutive Australian Supercross Championship besting Metcalfe all night long. In SX2, Wilson held on by the skin of his teeth, capturing an emotional championship, which was well earned after he considered retirement just one year ago. Cameron McAdoo won the SX2 overall on the night.

During the post race interviews, Anderson once again alluded to his love for the event and deemed that he may even add it to his yearly schedule.

“I had a good time out there tonight—the three mains were hard and anxiety levels were high given we needed three good starts, but in the end we got it done. I’m such a fan of coming down here, I’d definitely be down to make it part of my permanent schedule if they’ll have me down again.”

Wilson finished in second and is now the effective leader of the S-X Open Oceana Supercross Championship, with Anderson not racing NZ.

“We definitely call tonight a success—I’ve been off the bike a while, so it’s nice to get out there and do battle with the boys again,” Wilson said. “Then to top it off, I’m the leader of the S-X Open Championship! That’s actually sick, it’s been a while since I’ve lead a Supercross Championship, so I’m hyped to be able to run the red plate in Auckland. New Zealand, watch out, I’m coming for you.”

Overall, the Monster Energy AUS-X Open was once again deemed a huge success by all involved, with Sydney once again turning it on for the domestic athletes and fans, along with the international talent who travel to compete in the Land Down Under. We’ll see you all next year!