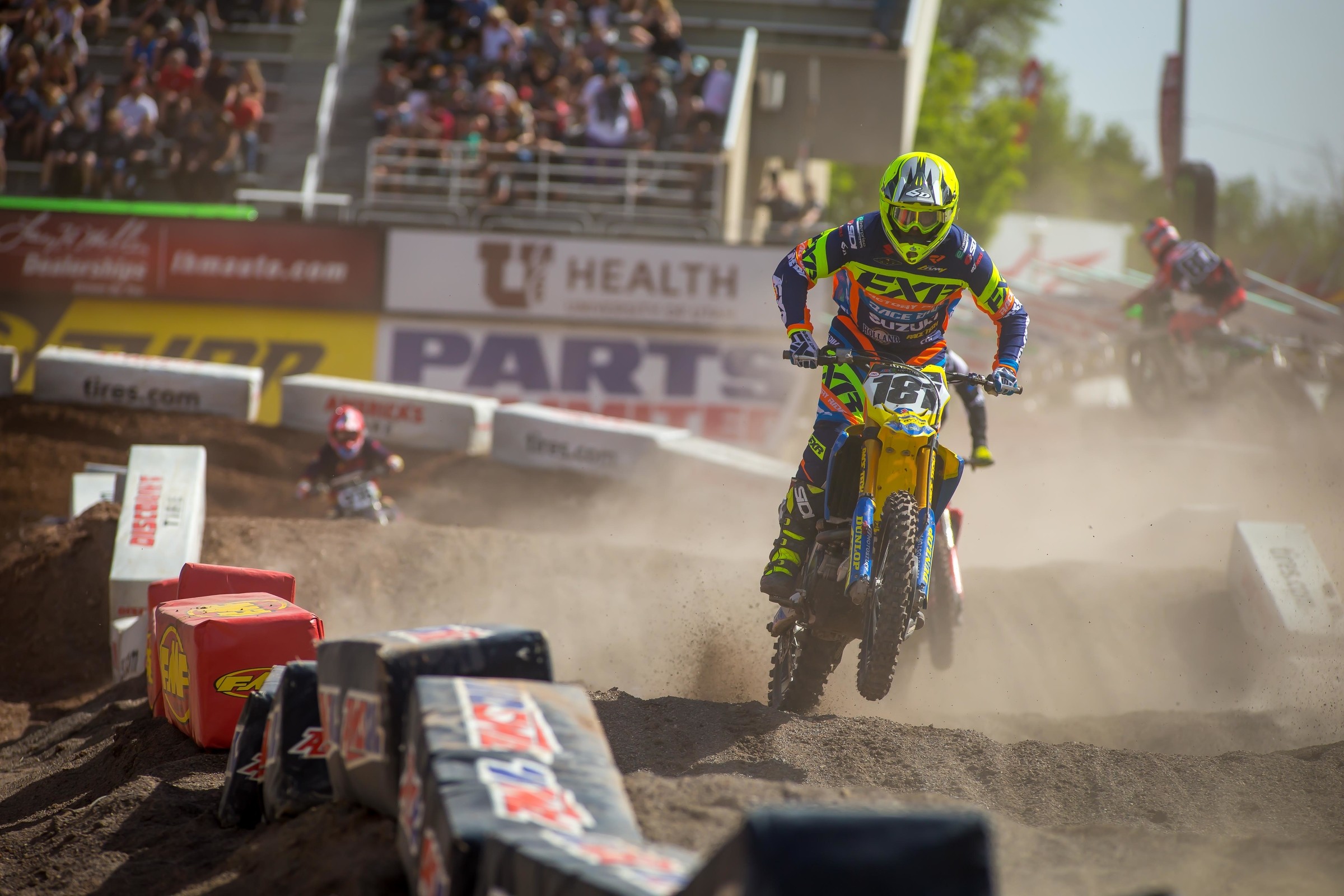 Back in April we interviewed H.E.P. Motorsports’ Dustin Pipes after making the 450 main event in Foxborough. During the interview we chatted a little about the challenges of running a team while competing each round of Monster Energy Supercross himself. Having found the struggles his peers suggested he may face were very real, Pipes has made the decision to put racing aside and embrace a full-on managerial role with the team.

It was recently announced that prolific privateers Alex Ray and Adam Enticknap have signed with the team to compete in the 2019 Monster Energy Supecross series, so we decided to ring up Pipes once again to chat about signing these two guys, his decision to not race this season, the future of H.E.P. Motorsports, and more.

(Note: The team expects to put out a press release in the coming days making a full announcement of team sponsors and riders.)

Racer X: Some changes for you for 2019. No longer a team manager/supercross racer, just kind of running the team full-time?
Dustin Pipes: Yeah, correct. I think Steve [Matthes] kind of dropped it a little bit last year. I haven’t really told many people this yet, but definitely done racing dirt bike and now in team manager mode, and pretty happy about it. I’m pretty pumped for the future.

I talked to you during the supercross season and you kind of alluded that there were some challenges with riding plus running a team. Did you find out the hard way that it was a little more difficult than you thought?
I think whenever you go into something you’re really confident in yourself. You think you can do kind of what others can’t. So I guess I was more of the young and dumb thing and had to learn it firsthand. Definitely was a little bit more than I thought it was going to be. After about the second or third round, I was like, oh, this is really going to be a struggle. But we got through it and I learned a lot. I was happy I was able to give it a go last year and now transition more into a manager role.

What was your overall deciding factor that it would be beneficial for you to not race anymore and to focus on a managerial role?
Obviously my whole life I’ve loved to race my dirt bike. It’s a part of my blood and stuff like that. I always want to race and I always want to be competitive and be out there on the track. But I think you just get to a point to where you want to see the team grow and you don’t want to hold it back. I think if I would have raced I might have held the team back. We want to get better results this year, as well as tie up some of the loose ends I didn’t have time to do this past year. So I think that’s the main factor, just wanting to see the continued growth of the team.

Does it feel less stressful now that you’re not riding and just running the team? Or is it just a different level of stress? Or you’re not really sure yet because the season hasn’t started?
That’s kind of a tough question. I think it’s the same amount of stress, but different at the same time. I think for me, there’s always so much to do in a day you usually never have enough to get it all finished, whereas last year I can say, okay, I’m going to do this, this, this, and this, and then go riding and let’s try and turn that switch in your brain off. Now, I don’t get the luxury to go out and do what I love and ride my dirt bike. Now I’m in the sport that I love, but I don’t get to really go and ride. I don’t think I’ve ridden in over three months or so. But I’d say it’s the same stress, just a different kind.

Do you think that since you went the route last year with riding and trying to run the team, is there anything that you learned from that that you can transition into the full-time managerial role?
I think that definitely has a plus to it. I think when you’re a rider and you’ve actually done those races and jumped those jumps and been through the whole schedule, it gives you more insight on how the rider might be feeling or why he’s riding a certain way or doing certain things. I think in terms of riding management-wise, that’s the main plus of it.

Speaking of riders, Alex Ray and Adam Enticknap, you signed those two guys. Does it help you in a managerial role since you’re familiar with those riders and they’re kind of your friends?
I think one thing we were going for this year is to just have a really good atmosphere in and around the pits. Not saying that’s not something we had last year, because I absolutely loved being with each of those guys, but it was one of the goals to start this year off that we needed to check off. Signing both those guys was something that I think helped checkmark that goal. Alex has a ton of potential. He tries his heart out. I don’t think you can ask for anything more of that. I think he always gives you 110 percent, and that’s what you want to look for. Adam, obviously he’s a magnet to everyone in the pits. We actually took his bike last year to the last half of the rounds, and not a lot of people knew that. It was just tough seeing him have to ride, and then he’s changing his tire like an hour before the race or he’s up late doing full bike prep. So I think there’s a lot of potential for Adam to do a lot better than he has in the last couple years, just having that weight off of his shoulders.

You really can’t get two riders who have more personality than A-Ray and Adam. Was that kind of a definitive factor of we want these guys because we know what they bring, and it’s going to be a lot of fun having those two around?
It definitely plays into it. I don’t think it’s the only factor. We had to choose from a pretty good amount of guys. We chose them over some other guys that might have a little bit better results than them.

Are those the only two guys on your team? Do you know who else is on your team? Are you able to announce that info yet, or no?
We are going to be releasing that soon, probably by the end of the week or early next week, I would think.

Can you talk about the level of support you guys are getting from Suzuki and other sponsors and stuff like that?
Our level with the factory has stepped up a ton this year. Last year it was kind of more of a feel it out thing and kind of see where it goes. This year they really stepped up a lot in terms of bikes and parts and a couple other things that I think people will be pretty pumped to see. In terms of sponsors, across the board everyone has kind of stepped up to make sure that we make it to the next level. Obviously, we’re still a SX-only team, but we hope to make the change for that in the near future.

As far as goals for the team and the riders, where would you like to see these guys at the end of the year and where would you like to see the team as a whole?
I think for us is just we expect our guys to be in the main events, that goes for Alex and Adam. They knew that when they signed that. We think our bike is more than capable enough to be in it. We made a ton of strides over last year. I think last year our bike was a little bit under par of what I would have liked to have seen just because we were very late on getting it done and it was a new bike. So we spent this whole off-season trying to get the bike better, and we definitely did that. I don’t think there’s any reason for our guys not to be in the top 20 and be in the main events consistently. On top of that, we really want to have a great fan presence. That’s one of our main goals is how can we connect the team more with the fans. We’re looking at ways to do that now.

So you guys are just kind of working on ways to get some fan activation, something they can take away when they leave the event?
Right. I think we just want to connect the team with the fans and bring them in a little bit closer to what they currently get. Just show them that our team is one that they can root for the next years, as well as the riders that we can connect them together. I think we won there.

Are you involved at all with riding the bike to help with R&D and that kind of stuff? Or are you just strictly managing? What’s your deal going to be like at the races?
I did a lot of the testing earlier this off-season, and then we brought in some different guys to ride the bike and kind of see where we were at. I did a good amount of the testing. Now I don’t really see that going forward, just because there’s really not that much time in the day to get away from it currently, but hopefully that will change. So I did part of the testing, and then a couple other guys came in and did that for us.

Since you’ve ridden the bike, does that kind of help you whenever you go to a guy or a guy has a question, then you kind of have firsthand knowledge of what the bike’s doing because you’ve ridden it?
Definitely. I think it’s good to know where its weak spots are, where it’s power delivery is and stuff like that. When someone tells you something, the riders, you can go, okay, here’s how we fix it.

You mentioned earlier that right now you guys are a supercross-only team. What are some plans that you guys are working for the future of the team? Are there plans in motion to do both series?
Right now we will be SX-only. If some of our sponsors want us to do it, we are more than willing to. But for this year, I expect us to be only SX. But we’re trying to make it for 2020 to do both the series.