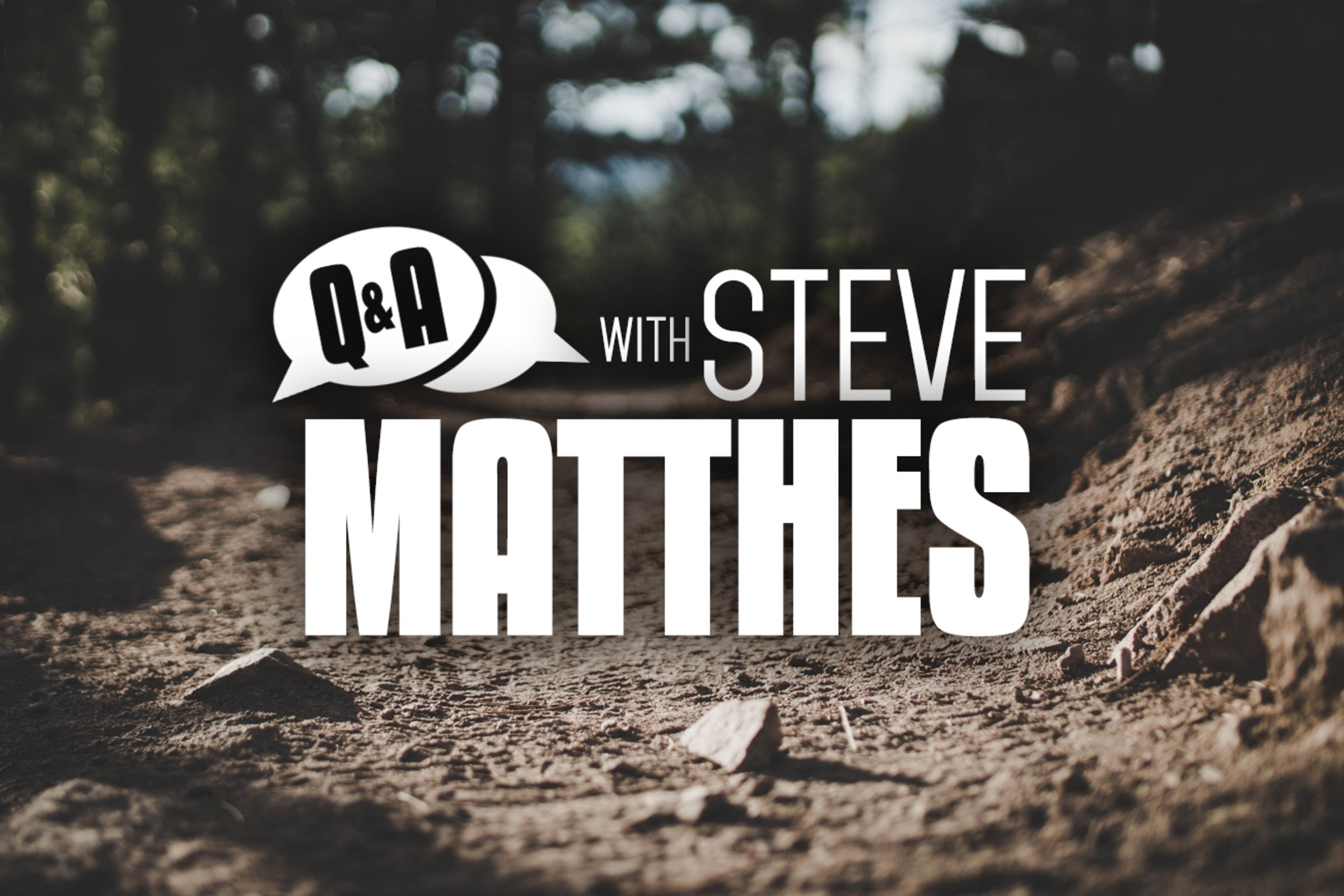 We opened up the mailbag to Steve Matthes last week and let him create 4,000 words of your questions and his answers. But 4,000 words is a lot of Matthes—we know because we have to edit Observations after every race!

So we split his Q&A into two parts. Here’s the second half after last week’s part 1.

Some questions have been lightly edited for clarity.

I have some questions that never really got answered in moto history:

Did Larry Brooks leave L+M Racing for "To spend time with family" or did he get fired by the Stewarts/others? What’s the story?

Why did Davi Millsaps get fired from Kawi? Did it ever get disclosed or what are the rumors?

Is there a "Don't ask Malcom Stewart where his brother is rule" when anyone interviews him recently?

No, Larry was fired and that whole thing about him being on family time was so dumb. Especially when other guys on the team were just straight-up telling everyone LB was fired. Like, at least keep your stories straight, right?

That story about Davi has never really been confirmed by either side. I believe there was a substance discovered in Millsaps locker that he didn’t have a prescription for. It wasn’t anything illegal but it required an RX. When he didn’t produce one, he was canned. In my opinion, there are some people in the pits that greatly overstep their bounds and glam onto these riders claiming they can help them. I’m just a media guy, I don’t run around pretending I’m an astronaut and can get you to the moon. Riders need to be more careful in who they trust.

Mookie’s cool with talking about James, and he did answer the question a whole bunch when James stopped coming to the races. But he gets it 24/7 from fans so why would we continue to ask him about JS7? The first few months when James didn’t come around we asked him about it but then I think we all just moved on. Mookie’s cool, though. He and James are a lot different in personality.

Osborne, Hill, Plessinger and Savatgy are all moving to 450's next year. Who has the best season of the four? See any one of them in the title mix?

I don’t see them in the title mix… maybe Wacko in MX. I think AP does the best in 450SX and Osborne the best in 450 MX. Although Joey was so impressive at the Monster Energy Cup that race doesn’t mean much come Anaheim 1 time. To go into your 450 rookie season and challenge for titles is very rare. It takes a bit of time.

Steve,
You and Randy [Richardson, on the PulpMX show] discussed Red Bull Straight Rhythm. What do you think the chances are of them making a full series and taking it to several cities?

I’d love to see it but I can’t see it actually happening. Red Bull doesn’t make money on the event and the company has a bunch of other events going on as it is. How rad would that be, though? One can dream…

If you could propose one change to the Monster Energy Supercross series to Feld, what would it be? Keeping in mind that its a proposal and still needs their acceptance, so it needs to be realistic. You got your nets.... what’s the next battle?

They’ve got to help out the teams but that may not be “realistic” as you say. Help out the teams that provide the riders each weekend in terms of letting them sell merch, pay them something for fielding a rider, or even just let them display competing sponsors in the pits. These are all things that will raise the tide and make everyone stronger. Oh, and more NETS.

Do you have a day job or PulpMX and Racer X keeps you busy enough?

What do your work schedule looks like during motocross/supercross season?

Keep on the awesome work, you got the best sport podcast out there and you make Canadian like me proud!

Oh Canada indeed! My day job is talking and writing about motocross. I’m lucky in that I’m one of a handful of dudes that can make a living covering this great sport. My work schedule is pretty rigid in-season, about nine hours of audio content a week, three or four columns, a couple of travel days, and that’s all she wrote, it’s time to get back on a plane and do it again.

Super big props Steve O on all the pulp empire success. Quick question. Since inception what kind of listener growth year over year have you experienced? (Just trying to reverse engineer what your making now LOL)

We’ve been lucky in that we add up listener numbers every four months and almost without fail, we’ve had an increase in downloads. It’s amazing to think that almost 40K people download the PulpMX Show every week. Pretty humbling and fun at the same time.

Hi Matthes,
As a big TP199 and KDub fan, I was stoked to see them up in Michigan. That said (and I’m likely to get pilloried for asking) do you think the FIM might push back on teams like this year’s Puerto Rico effort? While all three are MX heroes and they did a wonderful thing in raising money for a great cause, they also treated the MXoN as more of a celebrity fund raising event than a serious race. Two of the racers hadn’t raced in many years, one was clearly not in race shape, one did a back flip during a parade lap, and the two who raced moto three elected to turn the first lap into a parade lap and then call it a day (KDub may have stayed out a bit longer). I’m just wondering if the FIM might feel like this could be seen as somehow trivializing the importance of the race and set up rules that require participants be serious, current full-time racers. This might be a PR nightmare to stop this (no pun intended) but I’d imagine that there are some within the FIM who would prefer that all riders take the racing seriously. On the other hand, maybe they appreciate the added attention and enthusiasm. I can’t be the only person who has thought of this, and this is “ask anything” so what are your thoughts?

I think that once Ronnie Mac and his questionable tactics weren’t able to race everyone was all in on Team Puerto Rico. The three guys took it seriously on the track and tried their hardest, and they did legitimately qualify by winning the B Final, so no one can say they were too slow or weren’t competitive. That’s all the FIM or anyone else could ask for. I will say it was cooler than I thought it would be. I got caught up in the emotion, bro!

When Deano [Dean Wilson] found you in the pits at Glen Helen all geared up, why did you have a look on your face like you just got caught matthesturbating?

I mean, think about when Dean woke up that morning and how far down “seeing Matthes riding at Glen Helen” was on the list of things he thought he would experience. It was probably just above getting kidnapped by aliens.

Question 1: We know you can put political correctness aside, so Steve Matthes, is Roger DeCoster really helpful for the nowadays Team USA?

Question 2: Is Larry Brooks can be considered as the greatest SX team manager ever? (He's the only team manager who has won the first class title with non traditional factory team and he did it five times and with two different teams)

Question 3: If you become very rich what things you will want to do into the MX/SX scene? (team owner, SX or MX promoter etc or else?)

I don’t think if you change the manager the results would be any different but I will say that I think it’s time to try someone else in that role. Roger’s an icon but it’s been seven years of no wins; time to shake things up. Roger’s fine but like a team trying to shake up the players, the coach gets canned first, even if it’s not his fault.

Larry Brooks is a great manager, his passion has got him in trouble a few times but as I told him in a recent podcast, he’s probably underappreciated in terms of what he’s done in the sport. Remember, he was a bad-ass racer also!

If I won the billion dollar lottery I certainly would have a team in the pits. I’d paint the bikes flat black, my riders would wear all black gear, and we’d blast Back in Black on repeat in our pits all day long while our manager Tim Ferry tries to keep everyone under control. Then I’d stand on top of the semi and throw hundred dollar bills out to the fans after the race all the time laughing like crazy and holding a hairless cat. But that’s just me.