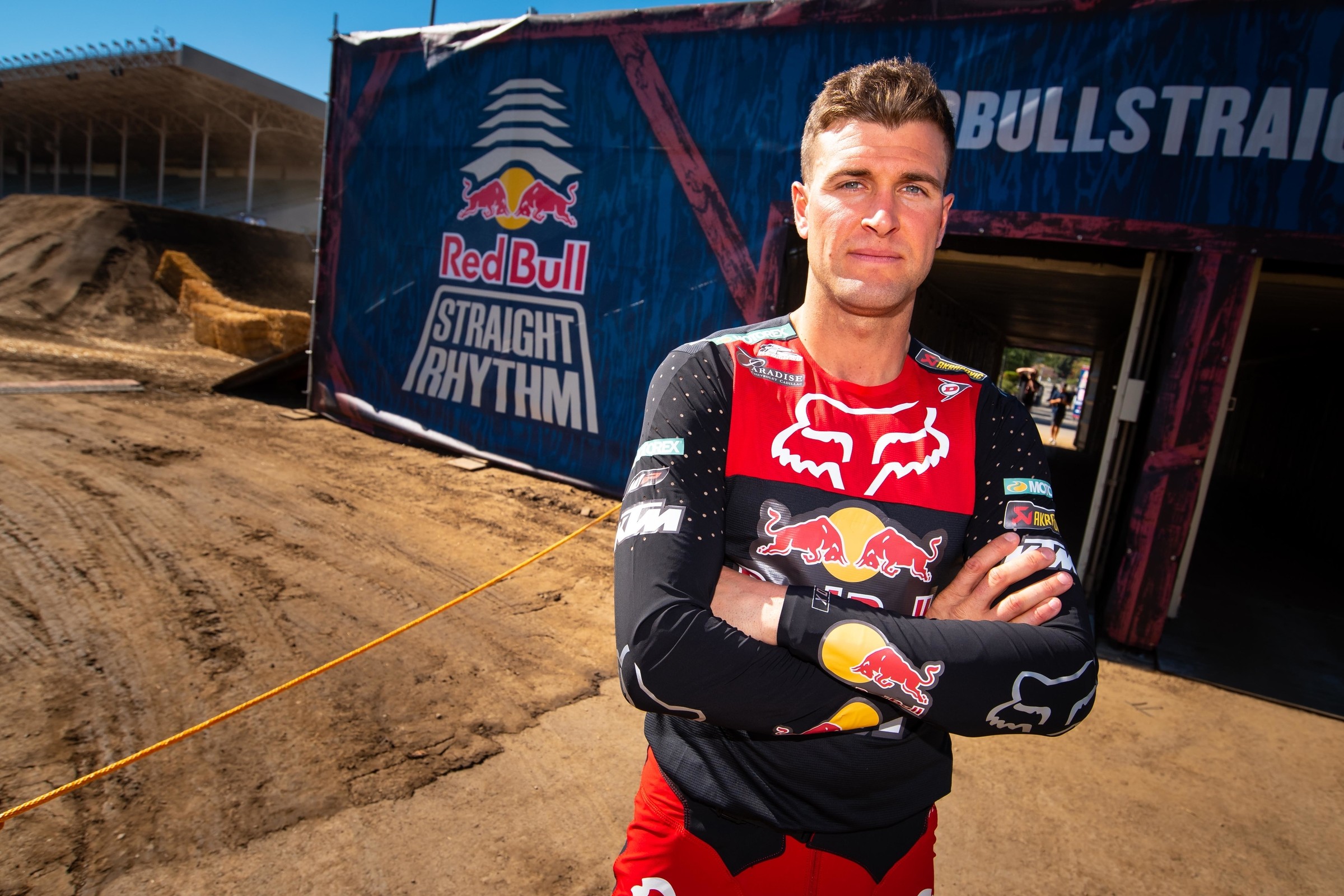 Since retiring at the end of the 2017 Monster Energy Supercross Championship, we’ve yet to see Ryan Dungey line up behind a starting gate. That changed on Saturday, when the four-time AMA Supercross Champion returned to racing at Red Bull Straight Rhythm. Dungey qualified fastest and beat longtime rival Ryan Villopoto in the semifinals before losing out to Shane McElrath in the final. Still, Dungey had fun in his return. He talked with Steve Matthes after the race.

Racer X: Hey, you didn’t win, but it’s a fun event. Welcome back.
Ryan Dungey: Yeah, that was fun. I was really pumped to make it to the final. Not to mention I was pumped it came down to the last moto at least and had something for him, but got edged out. It’s all good.

Where did you think he had you, or what happened?
We were pretty good at the beginning. We hit the rhythm lanes. He soaked them up and got a lot of forward momentum. We hit the tables pretty good, and then as we started inching more towards the finish I’m like, man, where is he gaining the time? Then I tried to gain it a little bit. That’s what’s so cool about this event. It’s splitting hairs. It’s black and white. You got a winner and a loser. A lot of the races that came down to the wire were fun.

Why’d you decide to do it? We haven’t seen you back on a bike. Why’d you decide to come out?
I was getting hit up by Roger [DeCoster] and Jeremy [Malott] kept texting me. “Do you want to do it? What do you think? You want to do it?” I kept beating around the bush and finally we were all just sitting there in the shop and it looked like Marvin [Musquin] wasn’t going to do it and they needed a rider. Me and [Ryan] Morais were like, let’s do it, man. Then we did, and shortly after that you get Villo throwing some jabs in on Insta. So it was all just good fun.

How about you and him end up racing? He said he’s happy. He’s fine with him losing to you, and he’s glad you didn’t win, but it’s okay to beat him.
Of course.

He said, if Dunge would have won, I’d never hear the end of it. It was cool, though.
I think the highlight of my night was going against Villopoto. Win or lose or whatever, it was cool to line up on the gate with him again and just go.

How much two-stroke experience do you have?
Well, the last time I rode one was in 2005, as far as trying to race one. So I had about four days on this bike. They got it all prepped, which was plenty enough. Since I turned pro… because everything went four-stroke before I turned pro.

Did you surprise yourself with your practice time? I think you were five tenths better than everybody else in practice.
No, one tenth.

Were you surprised?
A little bit. I didn’t even know where we stood because there’s no times or nothing, and then Carlos was saying you, [Shane] McElrath and Jordon [Smith], you’re all like within two tenths. I was like, okay. I got one more run. I’ll try to really push it, and I got a little bit more out of the track. You know your lap time was good when you hit everything perfect. It was good. I was pumped to get the quickest time.

So obviously I’m going to ask the question every fan has asked you. Obviously no supercross comeback, but do you think you’ll do more races?
Oh, gosh. No. I don’t think so. Even getting ready for this was like… This was just more of a one-off, fun deal.

RV seems to be wide open. I don’t know if you’ve noticed this.
No. I’ve got other interests and other things I’d like to do. It definitely was a fun couple weeks.

Welcome back. It was cool to see you. Thanks for doing this.
I appreciate it. It was fun.