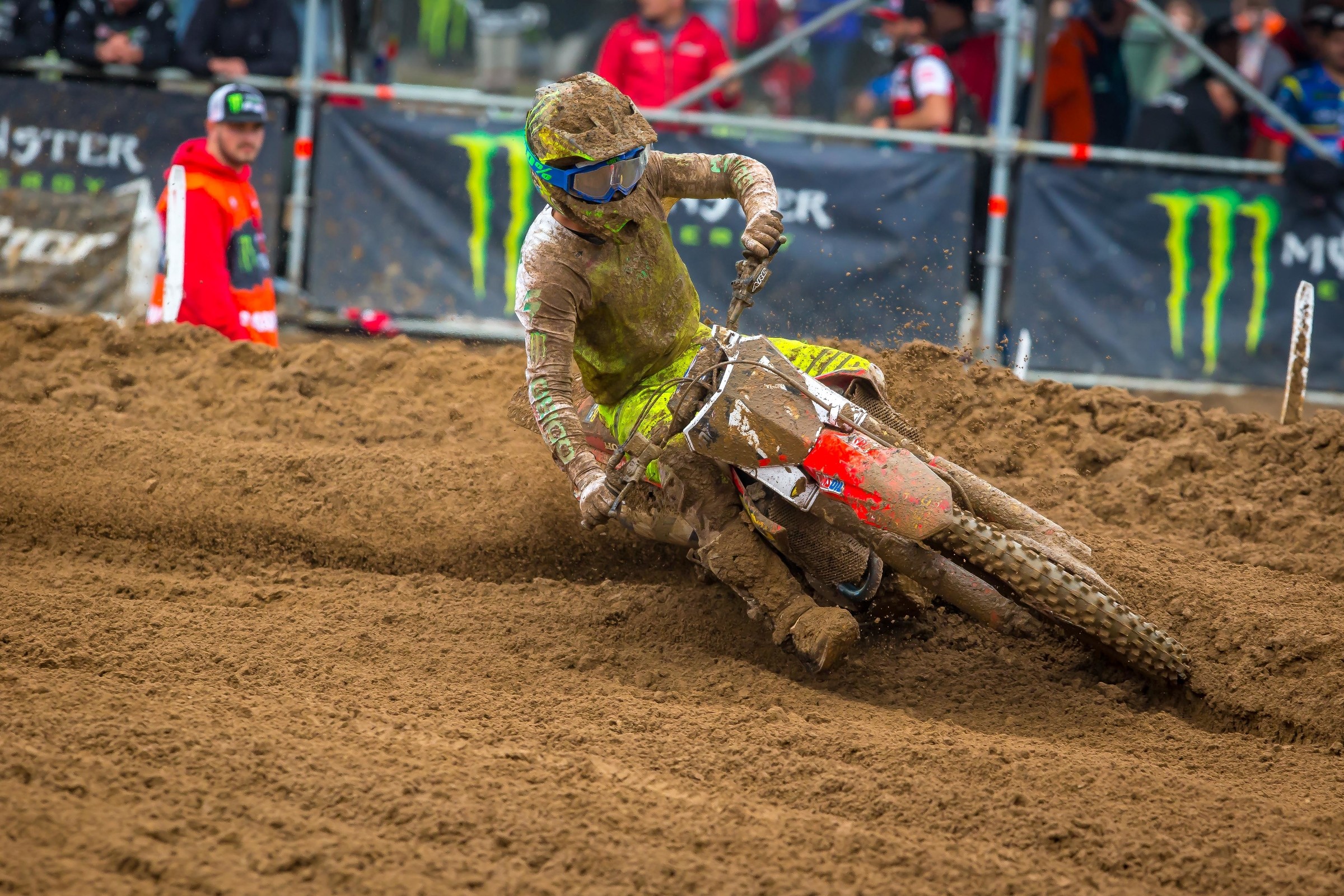 The nation-vs.-nation stuff will get the hype, but there’s a small wrinkle in the Monster Energy FIM Motocross of Nations format that also makes the event interesting: this is the only big race of the year where 250Fs really mix it up with 450s, and you never know what you’ll get. Small-bore bikes have straight-up won motos before. Other times they’re just fighting for top-tens.

This year’s MX2 division didn’t come down to Aaron Plessinger versus Dylan Ferrandis, as many expected. Instead, new MX2 World Champion Jorge Prado brought his incredible starting prowess to the front, and last year’s MX2 individual class winner at the Nations, Australia’s Hunter Lawrence, was there to battle him. Prado ended up with the better first moto after Lawrence had to pit for goggles.

“Just with the weather, fogging up. The roll-off was just fogging,” Lawrence explained. “Every time I would pull the strap, it would drag the moisture across even more. I was like, shit. Just wasn’t ideal. I was in like fourth or something, so I was like, this can’t be happening. But it was fun. Kept digging deep. Second moto, not too bad a start. Just head down, bum up, and went to work. Never gave up. That’s something that it’s just in my blood. I’ll never give up.”

Lawrence bounced back to outduel Prado in race two, with another 250F man, Great Britain’s Ben Watson, also in the fight. Prado won the class overall with 3-3 scores to Lawrence’s 8-2. Ferrandis was third with a 7-8. The veteran Frenchman was impressed with the kids in front of him.

“Yeah, it was impressive,” Ferrandis said. “The guys take a good start and were really fast. It was tough to pass also today, but it was a good day. It was a good experience. The guys from GP are really fast.”

“It's a great feeling,” Prado said in the post-race press conference. “Last weekend I got world champion, so it’s nice in MX2. The track was quite tough. I had really good starts and two times top-three with MX2 bike. I was leading that first moto for 20 minutes. I’m very happy about that race. I just want to say thank you to Team Spain. They did a great job coming here. In the last moto it was quite tough for us, but I'm really happy we got eighth place.”

Lawrence had extra eyes on him because he’s coming to America next year as part of the GEICO Honda team. This was his first ride on that team’s bike, and he crammed a lot of learning into the weekend. He wanted that MX2 overall, though.

“First loser this year,” he said. “Bit of a bummer, but with the circumstances we were under…. To say the least, those guys have been riding those bikes, Prado for the whole year, Benny since a good two months or three months now or maybe longer. It was my third day on the GEICO machine. So I’m happy. The team, we worked fast and we did what we could. All I can say is the team done an awesome job. We had one test day, but it was flat and it was spongy, soft, slop like it was here. It was flat and I was the only guy there, so it was a little bit like, we couldn’t do much. Our hands were kind of tied. So we came in with a bit of a setting in our heads of what we would try, and then we made some quick adjustments and some new settings and stuff. The boys hit it. We got it dialed. I feel real comfortable on the bike already for three days. Realistically, we just dipped our finger in the pie of testing.”