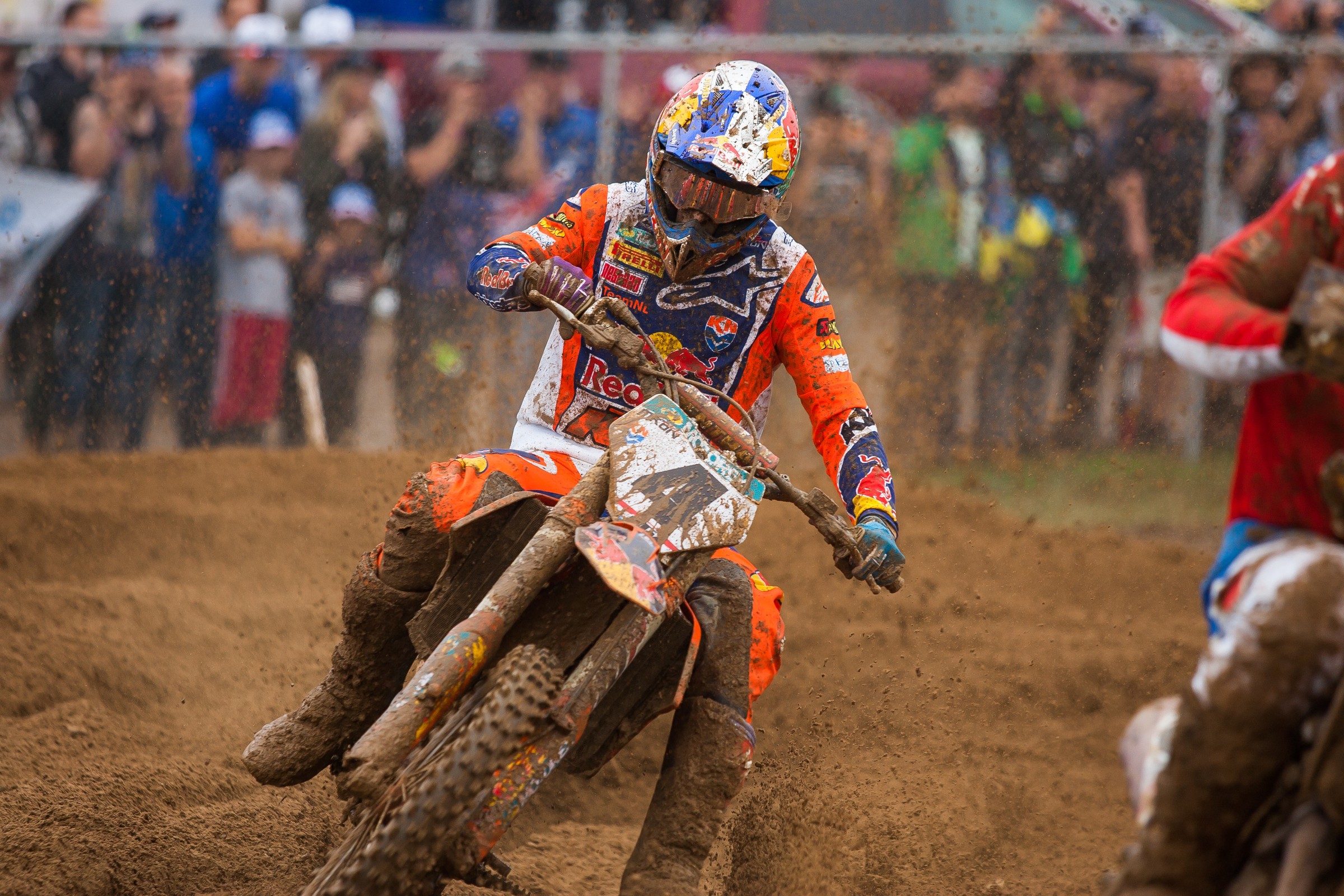 Welcome to the Race Day Feed, coming to you from RedBud. We’ll be posting updates right here on Racer X Online all day, so be sure to check back often. Posts are in chronological order, so scroll to the bottom for the latest info.

With more rain hitting an already muddy RedBud overnight and early this morning, the track has not held up as well as it did yesterday.

The first moto of the day took off under challenging conditions and it was Jeffrey Herlings leading the field off the start. Team USA got off to decent starts, as Aaron Plessinger was sitting around eighth and Eli Tomac was just outside the top ten.

Shortly after taking the holeshot, Herlings went down while leading and MX2 rider Jorge Prado took over the top spot with Gautier Paulin in second. Herlings dropped back to around fourth but it didn’t take long for him to regain momentum. Around the 12-minute mark, Herlings moved back into the lead and opened a huge gap. When he took the checkers, he was up 25.4 seconds on second place Paulin. Prado took third on a 250.

After starting outside the top ten, Tomac eventually worked up to fifth but had trouble getting around Tommy Searle for fourth. It wasn’t until late in the race when Searle suffered a mechanical that Tomac was able to move into fourth. Team USA is going to have to dig out of an early hole, as Plessinger went down twice in the moto and finished 18th.

The Netherlands will also have to throw away their first moto score, as Calvin Vlaanderen had bike troubles and finished 36th.

The Netherlands' Calvin Vlaanderen is out for the rest of the day after taking a rock to the eye on the first moto. His eye was bleeding and doctors won't allow him to race. This means the Dutch won't have a chance of winning the Nations overall.

Another moto and another Dutch runaway. This time it was Jeffrey Herlings’ teammate Glenn Coldenhoff who dominated in the mud.

Coldenhoff grabbed the holeshot over a trio of MX2 riders led by Jorge Prado. Team USA was off to a sluggish start, as Justin Barcia rounded the first turn in dead last. Aaron Plessinger wasn’t doing much better, as he was buried outside the top ten.

With Coldenhoff running away up front, the battle for second was heating up between Prado, Ben Watson, and Hunter Lawrence. Prado held second for most of the moto, but Lawrence made a late push after passing Watson and took over second with two laps remaining. He finished 16 seconds behind Coldenhoff. Prado held on for second with Watson and Jeremy Seewer rounding out the top five.

It was a disaster moto for France. Jordi Tixier suffered a mechanical and did not finish and Dylan Ferrandis was running sixth before he crashed late and took eighth.

After starting dead last, Barcia charged through the pack to secure ninth, while Plessinger struggled again and finished 16th.

If you were to drop the worst score for every country, the standings would look like this:

Entering the third and final moto, France needed big rides from Gautier Paulin and Jordi Tixier if they were going to win the Motocross of Nations for a fifth straight time. After a DNF for Tixier in race 2, the team had to swap engines for the third moto and hope that they didn’t make any mistakes.

Italy was also in contention for the overall, as Alessandro Lupino grabbed the holeshot and Antonio Cairoli was running inside the top ten. The stars of the moto though were once again the Dutch, as Glenn Coldenhoff took over the lead on the opening lap. After a seventh place start Jeffrey Herlings worked into second around the 20 minute mark and the Dutch duo ran off to an easy 1-2 finish. The Netherlands were easily the best country on the day, with Coldenhoff going 1-1 and Herlings 1-2, but they would only finish third overall due to a DNF-DNS day from MX2 rider Calvin Vlaanderen.

The battle for the overall was tight all race as the Italians battled with Paulin. Cairoli passed Paulin early, but the veteran gained momentum in the later stages of the race. He tracked down Cairoli around the nine-minute mark and put France back into the lead (Tixier was running 14th at the time). With two minutes left, Paulin gave France a cushion after he passed Lupino.

Paulin would finish third, while Tixier came home in 15th, which was good enough for the overall. It’s the fifth straight year France has won the overall. Cairoli and Lupino finished the moto fourth and fifth. Italy finished second overall.

Team USA needed some luck to win the overall entering the final race. And, well, they didn’t get any. Both Eli Tomac and Justin Barcia got bad starts. Tomac eventually worked up to seventh, while Barcia fell back to 13th. It wasn’t good enough to land the team on the podium, as they scored 49 points and finished a disappointing sixth.