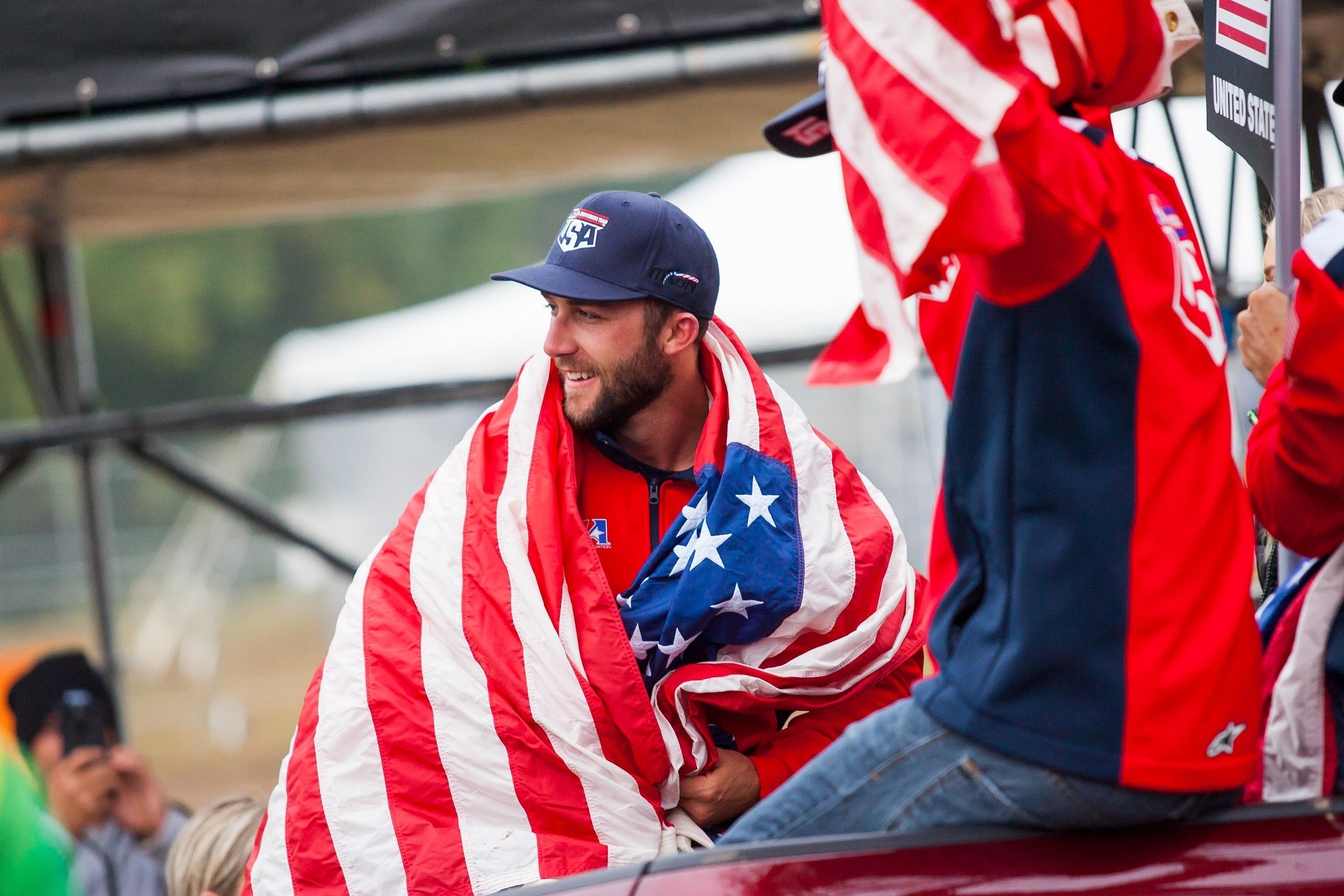 Welcome to the Race Day Feed, coming to you from RedBud. We’ll be posting updates right here on Racer X Online all day, so be sure to check back often. Posts are in chronological order, so scroll to the bottom for the latest info.

Welcome to RedBud and the 2018 Motocross of Nations. For just the fourth time in history, the biggest motocross event in the world takes place on U.S. soil.

After overnight rain, it looks like we may escape the heavy stuff today. May being the key word. As of this morning there is a 50 percent chance or more rain throughout the day. The track should be okay, though, as the team at RedBud were more than prepared for the weather. The track was rolled and sealed before the rains arrived.

This morning was the drawing for gate positions for qualifying and Team USA had luck on their side as they drew the second pick behind Guatemala. Australia was third, followed by Iceland, Brazi, and Ukraine. You can view full results here.

Practice was pushed back an hour, so we’ll get underway with MXGP Free Practice at 11:00 a.m. You can watch live on MXGP-TV.com.

Here is how the day breaks down:

The MXGP class was first out today in free practice and it was Jeffrey Herlings leading the field with a fast lap of 1:58.541. His MXGP rival Antonio Cairoli was second with a 1:59.646. They were the only riders that were under 2:00 minutes in the session.

France’s Dylan Ferrandis put the fastest lap down in MX2 with a 2:02.033. Netherlands Calvin Vlaanderen was second fastest with a 2:02.990. He was followed by Hunter Lawrence (Australia), Ben Watson (Great Britain), and Jorge Prado (Spain).

Great Britain’s Max Anstie was the top rider in Open with a 2:00.575. He was followed by Netherlands’ Glenn Coldenhoff, Belgium’s Jeremy Van Horebeek, USA’s Justin Barcia, and Germany’s Max Nagl.

Travis Pastrana, definitely the most popular rider in the session, was 26th fastest.

Nine-time world champion Antonio Cairoli entered the race banged up, but you would never know it by the way he dominated the first qualifying heat of the weekend. The Italian led start to finish and captured the MXGP heat by a commanding 21 seconds.

It was a rough start for Jeffrey Herlings, who unseated Cairoli as MXGP champion in 2018. With Carioli off to the early lead, Herlings was down in turn one and nearly a full lap behind the leaders after a stop in the mechanics’ area.

Tomac was not in his best form this afternoon. He could not get around Paulin and Searle, which allowed Roczen and Cairoli to run away up front. Tomac had moved up to fifth when disaster struck on lap seven (of 11) when he suffered a mechanical and was unable to finish the moto.

Cairoli ran away with the moto win over Roczen, but the real story of the race was Herlings. After going down in the first turn, he put in a fantastic charge. By lap six he had already worked into the top ten. Two laps later he was in the top five and he capped off an incredible charge by working all the way up to third at the end of the moto. Paulin and Searle would round out the top five.

The MX2 class was the second heat of the day and the holeshot went to Henry Jacobi (Germany) with Star Racing teammates Aaron Plessinger (USA) and Dylan Ferrandis (France) battling with Hunter Lawrence (Australia).

Plessinger took over the lead on the third lap but wasn’t able to shake Ferrandis. Disaster again struck Team USA on lap seven. While in the lead, Plessinger crashed on the uphill triple and fell all the way outside the top ten. He also lost his goggles in the crash (he pulled in later in the moto and got a new pair) and finished 11th.

Ferrandis took over the lead from Plessinger but had Lawrence hounding him the entire moto. Down the stretch, Lawrence made a few runs at Ferrandis but wasn’t able to make anything stick and finished less than a second down to the race winner.

With Tomac’s DNF and Plessinger’s 11th, Team USA actually sat outside the top 20 heading into the Open heat. Fortunately for the team, one moto score is dropped, so all Team USA needed was a good moto from Justin Barcia, and he delivered in a huge spot.

Max Nagl jumped out to the early lead in the Open heat and was followed by Glenn Coldenhoff and Barcia. Coldenhoff took over the lead early but had Barcia right on his rear wheel. Coldenhoff dealt with the pressure from Barcia well and went on to capture the win by just over three seconds. Barcia took home a key second, with Jeremy Van Horebeek, Jeremy Seewer, and Harri Kullas rounding out the top five.

As mentioned above, the worst score for each team is dropped. Today’s qualifying heats will determine gate picks for tomorrow.

Unfortunately for Travis Pastrana, Ryan Sipes, and Kevin Windham, Puerto Rico failed to qualify, finishing 24th. They still have a chance to make the A final if they win the B final tomorrow morning.