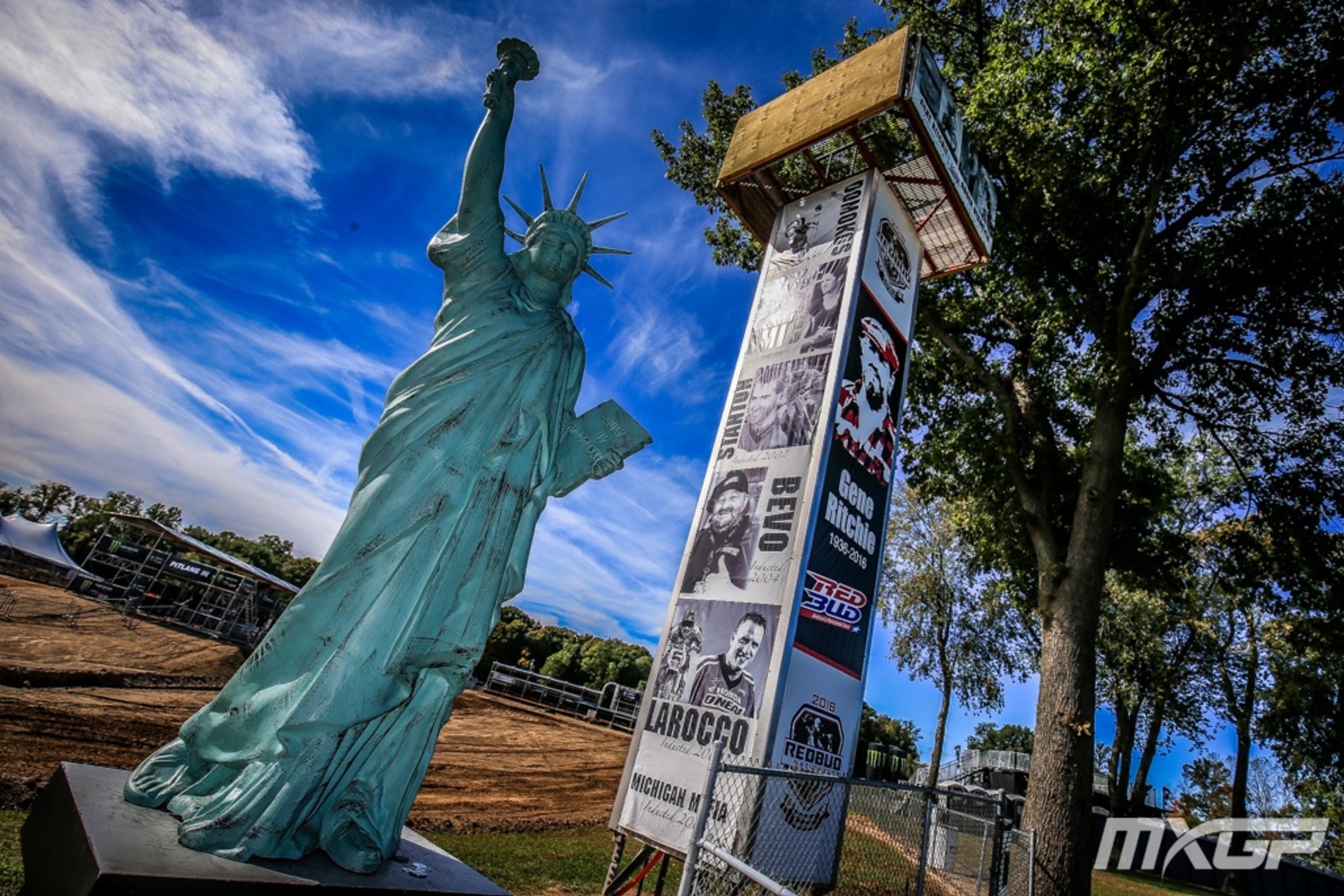 Welcome to Racerhead, coming to you from the epicenter of the motocross world for this weekend, RedBud in Buchanan, Michigan. As you certainly know by now, the 2018 Monster Energy FIM Motocross of Nations is going off this weekend, and it seems like practically everyone involved in the motocross world, past and present, is here for this long-awaited race. RedBud has long been one of the premier tracks on the AMA circuit, and its facilities and hardworking promoters and staff set the standard for any motocross track on the planet. The history goes back to the early seventies, when Gene Ritchie held his first motocross races there. It quickly became the site of a Trans-AMA race, and later a round of what’s now the Lucas Oil AMA Pro Motocross Championship.

Now it’s being rewarded with the single most prestigious race on the global motocross calendar, the FIM Motocross of Nations. The Ritchie family and RedBud crew joined forces with Youthstream to bring this event to America for only the fourth time in history, and at the fourth different track here in America. Everyone is working hard, getting along well, and excited to have a successful and entertaining event. And by the amount of people here already, I’m pretty sure it’s going to be the biggest outdoor motocross race ever held in this country. The Ritchies are also getting some assistance from their fellow AMA Pro Motocross promoters, including MX Sports, and a lot of folks from the American motocross industry.

If you can’t make it here yourself, the races will air live on CBS Sports Network on Sunday beginning at 1 p.m. You can also watch the races on www.mxgp-tv.com as the qualifiers will take place tomorrow. And tonight and tomorrow night, please check out www.racertv.com for our RedBud Raceday Live Show, where we will be interviewing top riders, showing event highlights, breaking down the racing and the MXoN, and just having a whole lot of fun. We will also be showing parts of Jeff Stanton’s MXoN Experience, which is a fundraiser for Road 2 Recovery and a Team USA reunion of sorts, hosted by Tim Cotter, Jason Weigandt, Rob Buydos, Megawatt, and myself.

As you can imagine, I’m busy up here trying to help however I can, but I do want to thank Giuseppe Luongo, David Luongo, Danielle Rizzi, and the entire Youthstream staff for rewarding RedBud and American motocross fans with a chance to host this event, see it in person, and understand why the Motocross of Nations is so important to the racing world. I need to get back out there and help out—and then be ready on Sunday to root for Team USA’s Eli Tomac, Aaron Plessinger, and Justin Barcia!

Monster Energy FIM Motocross of Nations at RedBud is real, it’s happening, and it’s going to be great. There’s too much talk about weather right now, though, because to me, even if it’s going to rain, it doesn’t matter. This race is once-in-a-lifetime event and everyone that ever wanted to be here should come, and the racers are going to be under the same pressure to perform rain or shine. It’s going to be not just memorable, but unforgettable. The weather is just a side note.

“This level of riders, they all have experience in these conditions,” said Team USA manager Roger DeCoster. “The European riders are very good in these conditions but I don’t think it’s going to upset the balance of the competition.”

There have been rumors that this could be DeCoster’s last run as team manager of the U.S. squad, as he has recently been promoted to a senior position within the KTM group and now Ian Harrison is the official team manager of the Red Bull KTM team. Roger said he’s not sure about his future with Team USA, though.

“I don’t know,” Roger said. “Depends on if these guys still want me! I’m just trying to get back on the winning side. We’ll let other people decide that [if I should still be team manager]. We are focused on this weekend and trying to win again.”

As far as that rain goes, Tim Ritchie, who runs the track, says they’ve got the dirt sealed in as best as possible and now it’s just a waiting game. His sister Amy, the other person who runs the place, said she saw similar weather last year at Matterley Basin in England and it didn’t dampen the enthusiasm of the crowd one bit. For sure, the hype is still in full effect here today. Today’s opening press conference featured ten top teams. Team USA showed up first so they hit the stage first.

“The hype is already what I expect,” said Eli Tomac. “People are starting to get out and about and getting excited.”

“I’m super excited,” said Plessinger. “It couldn’t be any better. I’m actually more excited than nervous. Last time I was here [at RedBud] I went 1-1 and I’d like to do that again… but I’ve got to race 450s now!”

“We’ve had a little time to do more testing and fine tune the bike,” said Justin Barcia. “I really haven’t had this feeling in a long time—to be this nervous but also excited to go racing. I can’t wait.”

The Dutch team, expected to be top contenders, also took to the stage. “I think as a team we’ll be strong but as an individual I’ll do my best,” said Jeffrey Herlings. “To win this would be a dream come true.”

Our GP correspondent Adam Wheeler was sitting next to me during the press conference and told me that Herlings is on a completely higher level than he even was last year. He’s so, so, so strong right now, in all conditions.

The best moment of the presser? The crowd starting getting loud in the back of the room and some of the riders could barely be heard. Press conference host Paul Malin kept trying to quiet the people who were chatting in the back, but finally Max Anstie, of Team Great Britain, then dropped an eff bomb in his best Connor McGregor style and told the crowd to shut up. “I went 1-1 last year so listen to me,” said Anstie, to laughter throughout the room.

Later, we realized why there was so much noise back there. Travis Pastrana and Team Puerto Rico were back there, and while they were supposed to be quietly waiting for their turn on the stage, people just couldn’t help but gawk and Travis. Finally, the team went to the podium to speak and the cameras surrounded them. Seriously, this team drew the most attention of any today.

As expected, this team was hilarious. Kevin Windham, sporting hair and a beard so large that it would seem difficult to even put a helmet on. He made jokes about being a full-figured person, and having hated every single part of trying to get back in shape for riding. Travis then made a bunch of jokes about being old, but he did say one of his favorite moments in his life was kicking France’s ass at the des Nations in 2000.

Lots to do here, including a live show on RacerTV.com that starts in an hour. So I had better go. Check out our RacerTV.com from 6 – 11 p.m. EST Friday and Saturday night.

Greetings from MudBud! Heavy rains arrived overnight and this morning, leaving the track and pits a muddy mess. We are still 48 hours from the meaningful racing, but with more rain in the forecast, this may turn into the second muddy MXoN in a row. The track was rolled and sealed before the rains arrived, so I think we may be okay, unless we get a heavy deluge on Sunday. With a plethora of tractors on hand, the Ritchie family, along with Youthstream, are ready to move some dirt if need be. Saturday will more than likely be a muddy one, but I am hopeful for Sunday.

Things are mellow at the track as of now but slowly ramping up. The camping lots are filling up, and the line to enter is growing by the second. I expect by tonight we’re going to be in full swing for MXoN 2018. The expected attendance rumors are swirling, with numbers ranging anywhere from 50,000 up to 100,000 people. With that sort of turnout, let’s hope Mother Nature cooperates a bit. The party will rage regardless, but getting around the pits and venue will be a nightmare if these rains keep up.

[Some track photos BEFORE the rain]

I have been more than impressed with the look and feel of the facility. The attention to detail for the track, pits, and spectator areas has been next level. With this event making its return to the USA after eight long years, it’s great to see such a fantastic effort and presentation. I’ve had several of the MXGP contingent already comment about how great things look. This event has America’s name on it, and RedBud is a place we can all be proud of.

As for the racing, we all know who the players are. The weather is the huge X factor and could change the entire landscape. Luckily, we have some great mud riders on the USA squad this year. Whether or not we can match the mud prowess of the MXGP teams remains to be seen. Hopefully we don’t have to find out and the track shapes up for Sunday afternoon. Even with a muddy Saturday, if the skies don’t open on Sunday, the track can be scraped off and decent for Sunday. Everyone wants to see the Herlings-Tomac showdown, of course, but Roczen, Barcia, Cairoli, and the rest may have something to say too.

Muddy conditions can change the narrative quickly. Who would have predicted a Max Anstie win last year at Matterley Basin? That’s the craziness that this weather might bring. The USA should be able to handle whatever weather may come, but I think it’s safe to say we’re all praying for sunshine come Sunday morning.

That’s it for this week. Thanks for reading Racerhead—we’ll see you at the races.