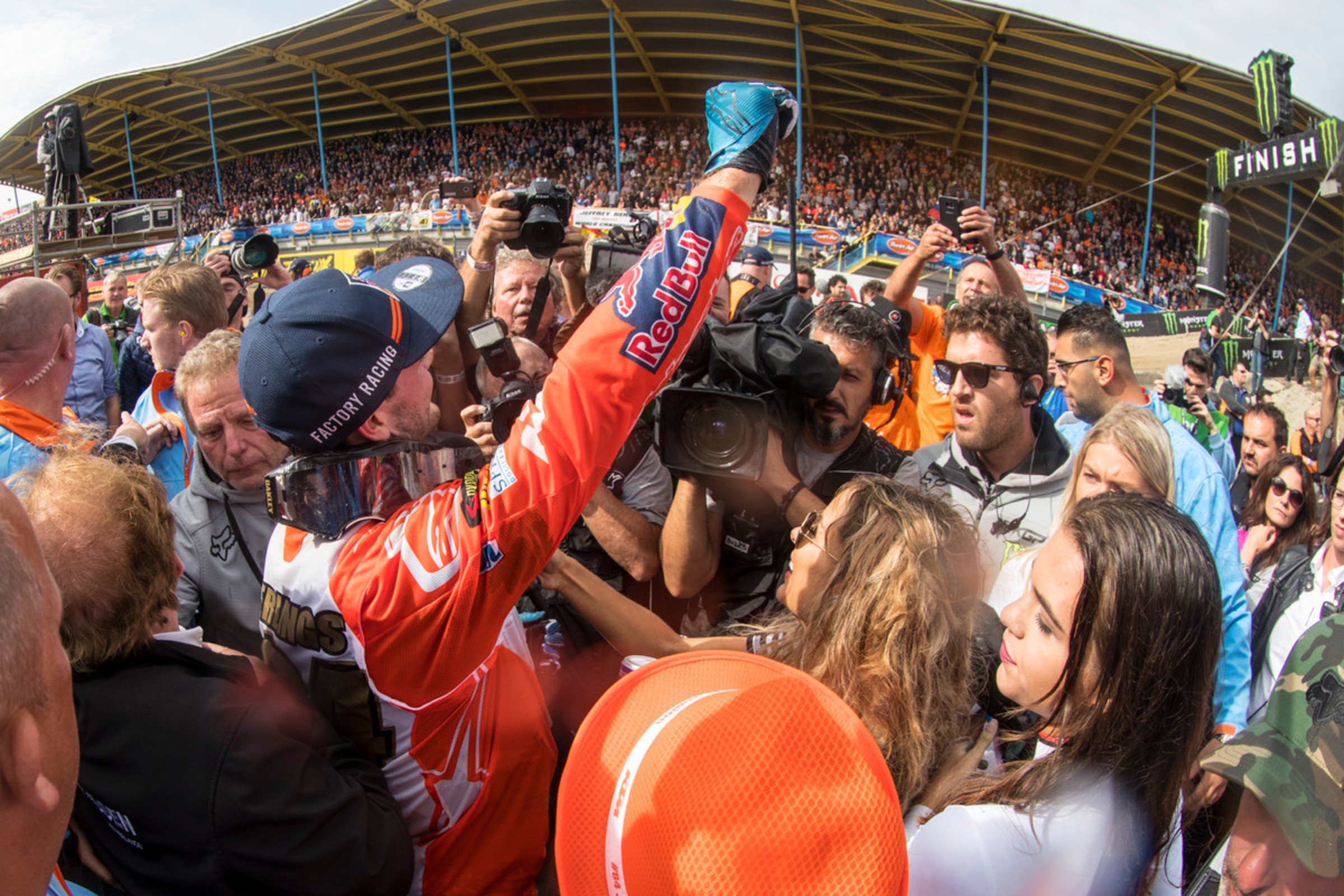 On This Day in Moto September 16

Earlier today 24-year-old Jeffrey Herlings clinched his first MXGP World Championship with a first-moto win at Assen in the Netherlands. Herlings, who won three MX2 world titles previously while rewriting the record book for race wins in that class, is now on the rapid ascent of the MXGP record books. Herlings also won the second moto and now has 83 career wins, putting him even with his rival Antonio Cairoli, and he is now just 18 wins behind the all-time record of 101 wins, held by Stefan Everts.

Another close one at the Motocross des Nations, and another streak-saving effort by Jeff Stanton. This time it came down to the very last laps of the second moto between the U.S. team and Belgium, on the sandy track known as Vimmerby in Sweden. Stanton had won his first 125/250 moto but 125cc rider Damon Bradshaw, fourth in his first 125/500 leg, crashed out in the race Stanton won. And then 500cc rider Jeff Ward, second in that 125/500 opener, would have problems in the last moto and only finish ninth. That left it all on Stanton's shoulders.

On the Belgian side was Dirk Geukens, who was not fond of Stanton and Team USA. Geukens spent part of the morning practice sessions taunting and generally annoying Stanton and Ward. Here's how we described the end game of the 1990 MXoN in a previous recap of Jeff Stanton's Team USA tenure.

"The third and final 250/500 moto was do-or-die for Team USA, and it looked like they weren't going to do it after Ward's shock blew, forcing him to drop way back through the field on the sandy Vimmerby track. Stanton, who had been involved in a first-turn mess, was charging from the back. He needed to catch and beat Geukens, the same man who was being offensive in practice. Stanton knew exactly what he had to do.

"'In practice, Geukens follows you, passes you back and forth,' he explained to Racer X in one our Greatest Races pieces. 'It's stupid, and I got tired of his BS all day. So I put him down in the back. I parked him. He screwed with us too many times and I got tired of it.'

"Stanton's takedown of Geukens at the very end of the race meant victory over defeat, extending the streak to ten in a row. And what happened between Geukens and Stanton after the race? He went looking for Stanton at the podium, shook his hand, and said, 'Congratulations. But I'll remember it for next year.'"

Ward, who was the '84 AMA 125cc National Champion, was trailed in both moto by his teammate Broc Glover, who was there racing as a replacement for the injured David Bailey. The Honda rider was part of the winning MXoN effort the previous week but also injured himself. Glover just happened to be in Europe for a supercross race, and Team USA manager Roger DeCoster tracked him down there. Broc flew to Sweden and then followed Ward home in both motos. And finishing third the first time out for a Team USA podium sweep was Johnny O'Mara, with Yamaha's Ricky Johnson seventh. When the scores were added and the two worst finishes dropped (O'Mara's eighth and Johnson's nine in the second moto) Team USA's low score of 16 was three times better than runner-up Sweden's 61.