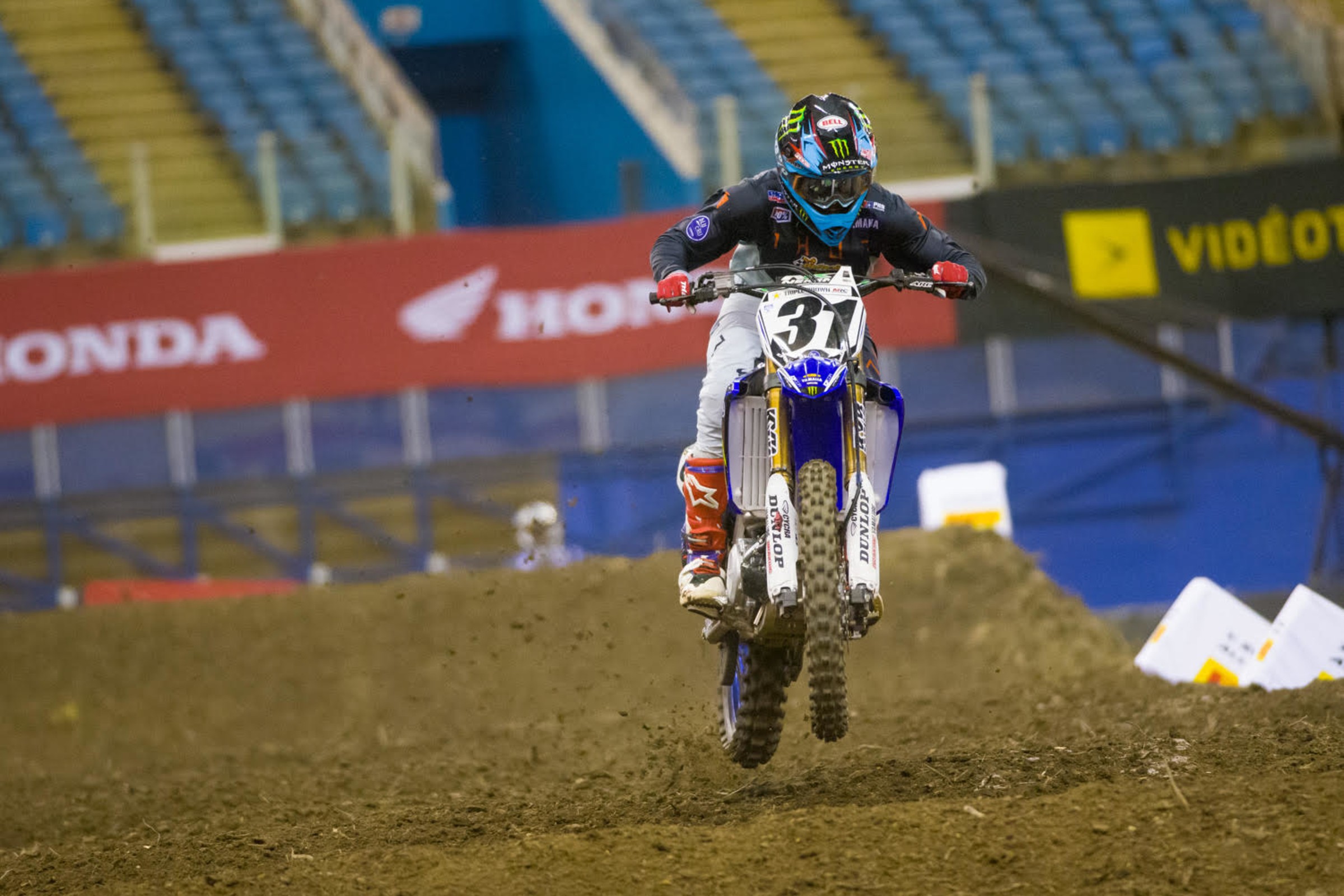 Montreal Supercross is back! Once the longest running consecutive supercross in North America, the race went away a few years ago and truthfully, when it was announced it was returning, it caught everyone by surprise. New promoters, new track design, and no racing other than motorcycles made the reborn Montreal Supercross a bit different.

And truthfully, if you closed one eye, it was a little bit like the old packed Olympic Stadium. The passion of the fans was there and although it was far from the sell-out like the old days, it was generally met with enthusiasm and ticket sales weren’t bad.

You know who wasn’t bad? Malcolm Stewart, that’s who! Stewart rode his first race of the off-season with his new Smartop/Bullfrog Spas/MotoConcepts Honda team and was the dominant rider in practice and all three main events. The second main saw Stewart get banged around off the start a bit but he got busy and came from outside the top ten to the lead with the white flag waving in the ten lap main event. It was quite a ride using, what else, superior whoop speed to track down leader Matt Goerke on his Rockstar Energy OTSFF Yamaha ride.

Stewart had Monster Energy/Yamalube/Star Racing Yamaha’s Colt Nichols to deal with in each main event, but Nichols was a click off the #27 Honda rider each time out. In the second main when Stewart had the issue with a bad start, Nichols was even further back. He mentioned after the race that he was pacing Malcolm through the pack.

Matt Goerke finished third overall and led the majority of the second main when he collided with Stewart’s rear wheel and went down. Matt regrouped for fourth in that main. Goerke and Canadian KTM’s Cole Thompson had some intense battles all night long while Canadian GDR Honda’s Colton Facciotti, fresh of another MX1 motocross title, dealt with bad starts and a fall to ruin his night; he also lost a few points to Thompson in the Rockstar Energy Triple Crown Series.

Autotrader/Yoshimura Suzuki’s Alex Martin rode a 250F in the 450 class and at one point in main event three was lurking just outside the top three when he got stuffed and lost a few spots. Still, Martin was impressive on the smaller bike and had good whoop speed (a key point on the track, the whoops were pretty tough) on the 2018 Suzuki RM-Z250F. He finished sixth overall.

GEICO Honda’s RJ Hampshire had a rough start to his day when his bike cut out on the first lap of practice on an on/off and he went down hard. The team fixed the issue and he ended up ninth overall. “Filthy” Phil Nicoletti debuted his new Rockstar Energy OTSFF Yamaha ride and was in position for a sixth overall until he crashed late in main event three and Hampshire plowed into him. It was a DNF for Nicoletti.

In the MX2 main event it was MX2 national champion Jess Pettis who ruled, leading from start to finish to take the win over Ohio’s Logan Karnow and Monster Energy Kawasaki’s Shawn Maffenbeier.

Ed note: All photos above are from practice.