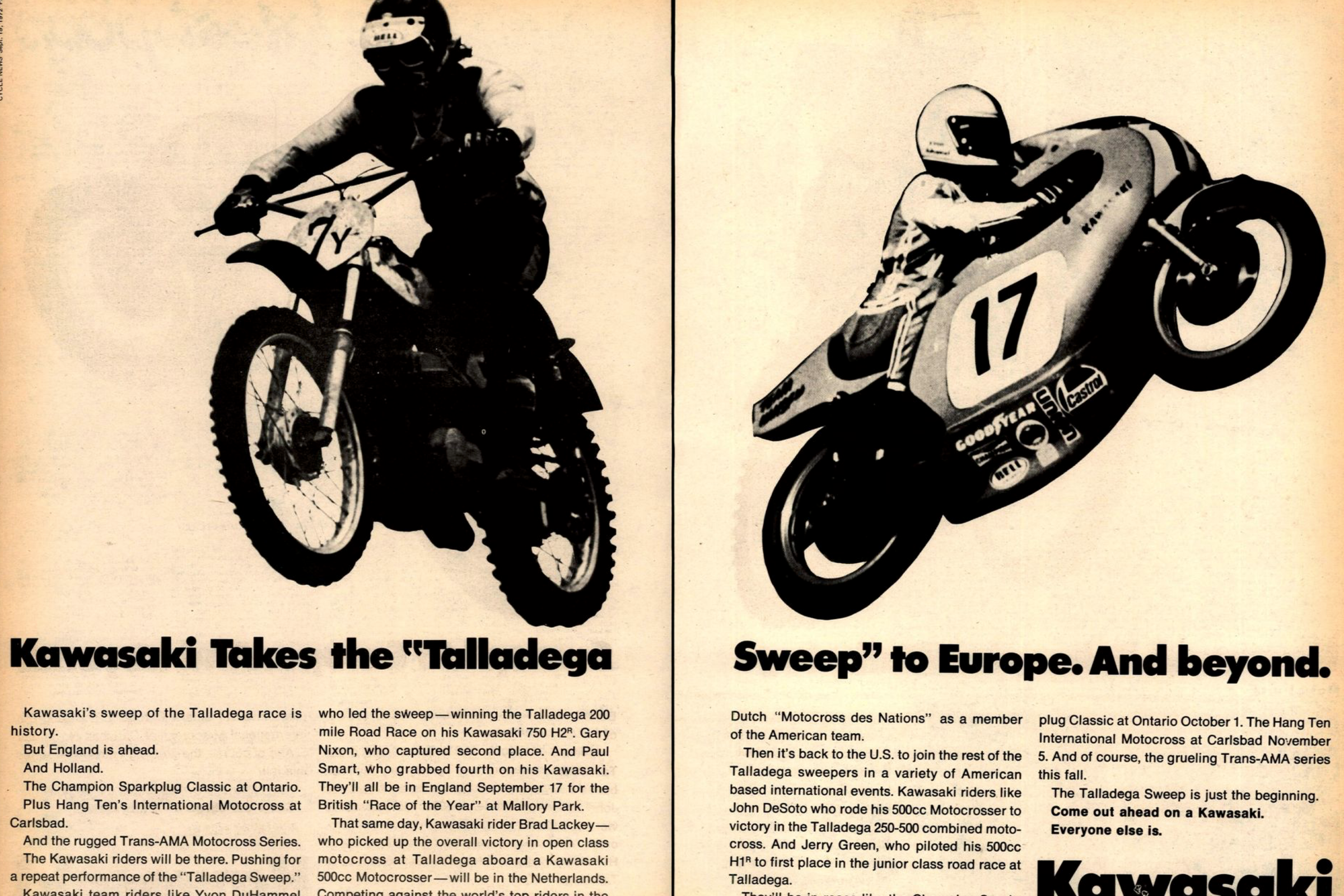 On This Day in Moto September 2

In the 250 Class the overall winner was Bultaco rider Gary Bailey, topping CZ-mounted Ricky Jordan of Arkansas and the Husqvarna of Gary Semics. Bailey not only won the AMA National, he built the track in the Talladega infield!

The FIM Motocross des Nations are held in Wohlen, Switzerland, and the Roger DeCoster-led Belgium team won, as expected. Suzuki's DeCoster, at this point a three-time 500cc World Champion, went 1-2 in the motos to win the individual overall. Sweden's Are Jonsson won the second moto aboard a Yamaha. DeCoster's teammates were Jaak Van Velthoven, Sylvain Geboers, and Raymond Herren. A bigger surprise was the performance of Team USA. The Americans only had three riders (Mike Hartwig, John DeSoto, and Jim Pomeroy) but still finished fourth overall. Brad Lackey was not able to make the race when Kawasaki decided not to support him on the trip, as he was soon to part ways with the brand and join Husqvarna. That in turn meant all six moto finishes from the three riders who did attend had to count; the two worst scores for every team would be thrown out. The Bultaco mounted Pomeroy was the top performer with 7-5 scores, CZ's DeSoto went 15-10, and Husqvarna rider Mike Hartwig went 18-18.

Finishing second and third behind Belgium were the Jonsson-led Swedes and the all-CZ Russian squad.

The FIM Motocross des Nations go off without a Team USA as the American contingent more or less fell apart due to a lack of interest from several top riders as well as the OEMs U.S. distributors. The race would also go off with Heikki Mikkola, the greatest Finnish rider ever, as he injured his back the week before the race and decided that it was time to stop racing for good. The Flying Finn retired with three FIM 500cc world titles (1974, '77, '78) and a 250cc title (1976) and with the distinction of being the first man to win world titles in two separate divisions.

As for the race, Team Belgium won again, despite not having the services of Ivan Van den Broeck, who broke his leg in Saturday's qualifying. Nevertheless, the team of Roger DeCoster, Andre Malherbe, and Harry Everts —all would win multi world championships in their careers—won based on their six motos scores.

And in America the AMA announced that it was changing the name of the Trans-AMA Series to the Trans-USA Series, hoping to revive the once-grand series that had been seeing a steady decline of European participation and race dates. The series, ten races in 1976, was down to five just four years later. It was also decided that the engine displacement would be "open" rather than just 500cc and that way riders could compete on 250cc or even 125s if they wanted.

At Broome-Tioga in New York Team Honda riders swept the 125/500 National as Mike Kiedrowski topped the 125 Class and Jeff Stanton won on the 500. Kiedrowski was followed by Suzuki riders Larry Ward and Ron Tichenor, as well as Yamaha's Damon Bradshaw, who dropped down to the 125 Class from the 250s when that series ended.

In one of the more dramatic days in American motocross history, Ricky Carmichael, having already clinched the 250cc title, decided to drop down to the 125 Class for the final round of the 2001 AMA/Chevy Trucks Pro Motocross Championship. That opens the door for his Team USA teammate Kevin Windham to get the last 250 National win of the season. The 125 Class is a different story though as Red Bull KTM's Grant Langston and Pro Circuit Kawasaki's Mike Brown are going down to the wire for the title. Brown is friends with RC as well as the third member of Team USA, which leads many to speculate that Carmichael has dropped down to help him in the points chase, but RC is adamant that he's there to win what would be his 26th 125 National win, breaking a tie at 25 that he had been in with Mark Barnett as the most wins in the class.

When Carmichael crashes off the start in the first moto it all seems a moot point, and Brown and Langston battle up front. Brown wins, but Langston is second and has a comfortable gap in point going into the last moto.

This time Carmichael takes off and crushes the field, but his third in the first moto means he's not going to get the overall. But then with just two laps to go Langston flat-wheels the landing of a massive tabletop and crushes his back wheel! He is forced out of the race, and suddenly Brown is going to win the overall and the title. However, knowing what that 26th win meant to his friend RC, Brown slows down and lets Factory Connection Honda rider Branden Jesseman pass him for second, giving RC the overall win and Brown the title while Langston sat heart-broken in the infield.

Sadly, Team USA 2001—Carmichael, Windham, and Brown—would not go to the FIM Motocross des Nations because nine days later, on September 11, terrorists attacked the United States of America and the world as we knew it changed in an instant.