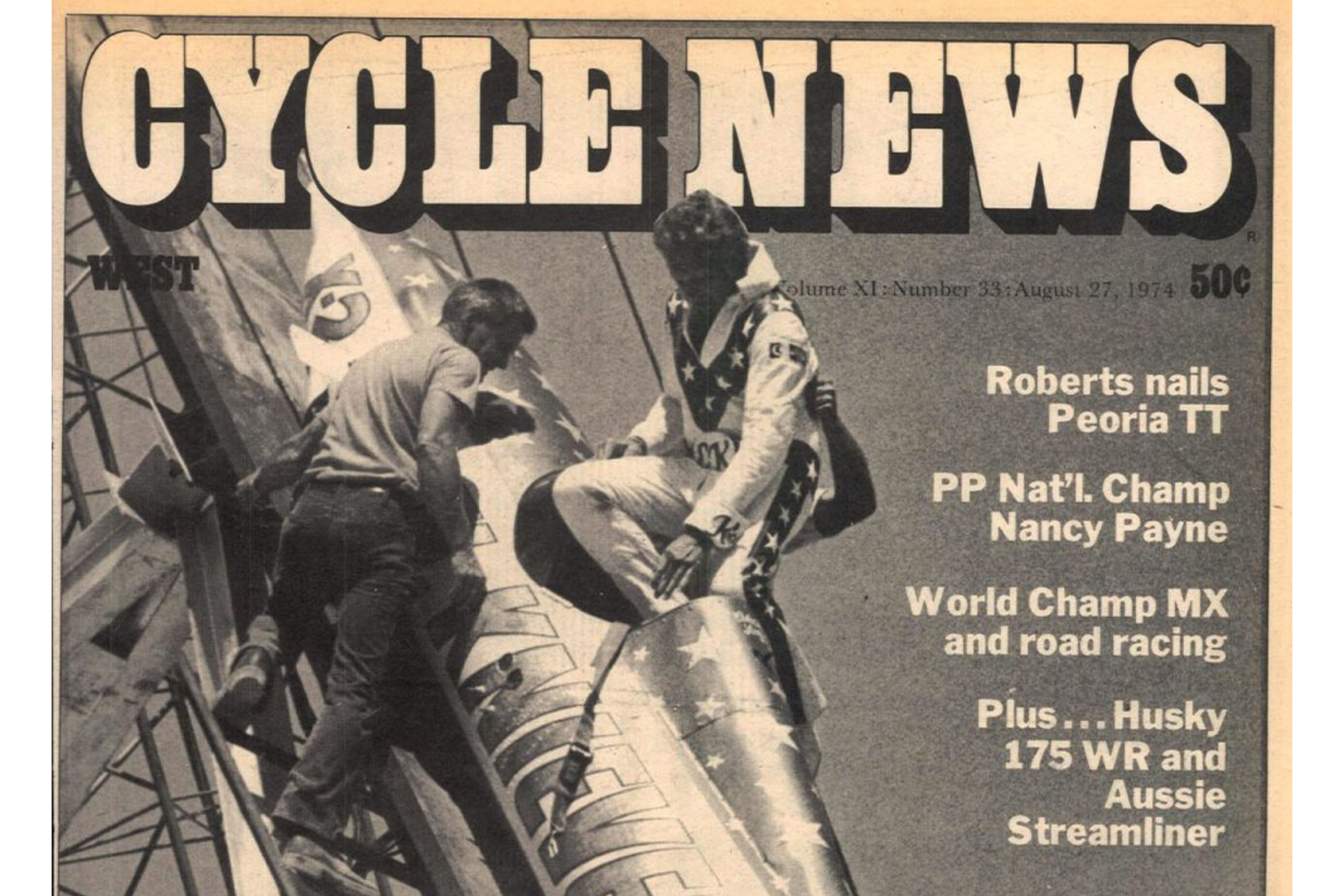 On This Day in Moto August 27

With his long-awaited jump of the Snake River Canyon coming up, Evel Knievel landed on the cover of Cycle News (and a week later, he would be on Sports Illustrated) as he shook down his X-2 SkyCycle, testing the rockets (but, regrettably, not the parachutes).

Japanese rider Akira Watanabe won the last round of the 1978 FIM 125cc Motocross World Championship in Czechoslovakia, and with it, the '78 world crown. Watanabe is the one and only Japanese rider ever to contend for an FIM Motocross World Championship, let alone win one. His teammate, winner of the first three 125cc world crowns, Belgium's Gaston Rahier, finished the race and the season in second.

Bad news for Team USA. The AMA announced that they would not be participating in the upcoming Motocross (500) and Trophee (250) des Nations due to a lack of support and interest from the various teams chosen: Suzuki's Kent Howerton, the 250 National Champion; Honda's newly-crowned 500 champ Chuck Sun; AMA Supercross #1 Mike Bell; and Europe-based 500cc GP rider Brad Lackey. According to Cycle News, the AMA's Mike DiPrete said, "Lackey was asked to go, but he told me Kawasaki wouldn't support him, so he couldn't go."

Lackey was racing for Kawasaki of Japan, not U.S. Kawasaki, since he was racing the FIM Motocross World Championship. U.S. Kawasaki riders Goat Breker and Warren Reid were approached, but Kawasaki decided not to back them, either. So Honda was called to see if Steve Wise could join Sun on the trip. They said yes, but Yamaha decided not to send Bell, as they wanted him to be at their Vegas dealer meeting, slated for the same weekend as the Trophee race.... Even LOP Yamaha's Marty Moates, the winner of the Carlsbad 500cc USGP, was invited to join the team. He found support to go, but Howerton called and said if Lackey and Bell weren't going, he wasn't going either. Soon, the whole thing was called off—for the second year in a row!

In the end, Team USA's absence from the MX and Trophee des Nations would harm the standing of the AMA, and, for all intent and purposes, cost the country its 125cc U.S. Grand Prix at Mid-Ohio. Another absence in 1981 may have cost them Carlsbad's (500) and Unadilla's (250 GP) moving forward. And when the disinterest started again the following year, we were fortunate that Team Honda, along with Bel-Ray, Hi-Point Racing, and Motocross Action employee Dick Miller stepped up and sent all four of their riders to the races... and that was the beginning of the Golden Era of American motocross.

Trampas Parker, barely known at the start of the season, clinched the 1989 FIM 125cc Motocross World Championship with a runner-up finish in the first moto at the series-ending French 125 Grand Prix. Parker, a journeyman pro from Louisiana, had picked up a ride with Italy's Parioli-Based KTM team and shocked everyone by sweeping both motos of the season opener in Italy. From there, he would battle back and forth with Chesterfield Suzuki rider Alessandro Puzar, as well as fellow American KTM riders Mike Healey and Bob Moore. In winning, Parker became America's first 125cc world champion.

On that same day on the other side of the motocross world, at Washougal, Washington, Honda's Mike Kiedrowski topped fellow rookie Damon Bradshaw of Team Yamaha in the 125 National as their points battle tightened up. Kiedrowski swept both motos to Bradshaw's 3-2 finishes, cutting his points lead to eleven with four rounds left.