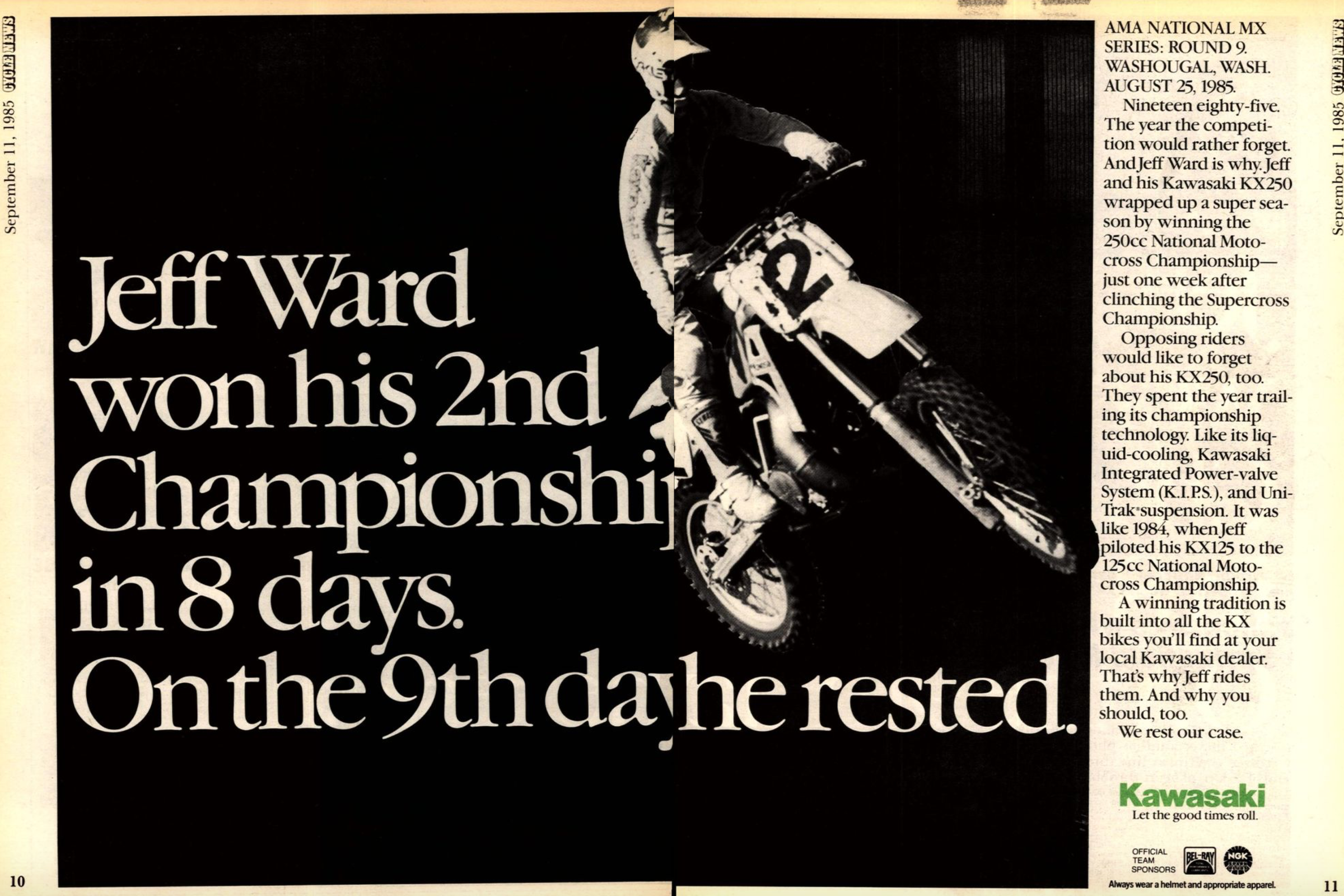 On This Day in Moto August 25

The 250/500 National at Highland Hills in Hillsboro, Ohio, was just like many other nationals back then, with Jimmy Weinert battling Tony DiStefano for 500cc supremacy. New York's Weinert was on a Kawasaki, Pennsylvania's DiStefano on a CZ. Weinert fell down, and Tony D. won the moto, but a third-place the second time out gave the Jammer the overall and, eventually, the title, but the race is memorable for one truly epic moment: Weinert came in under Lackey in their first moto duel for the lead and made contact, and the moment was captured on film by Cycle News photographer Charlie Morey, the future boss of Dirt Rider magazine. The photo is the epitome of motocross in the seventies, with the old battling the young, a Japanese brand taking on the European giants of the era, and a time when "rubbin' is racing." It made the cover of Cycle News West, and many years later, Racer X Illustrated.  It remains one of the best motocross photo of all time.

A peculiar set of circumstances leads to two riders winning the one and only AMA Nationals of their professional careers. With Honda's Ron Lechien having already wrapped up the 125cc title, and Broc Glover likewise in the 500 Class, Team Honda decided to have both Lechien and 500cc contender David Bailey both ride the 250 Class at the series-ending Washougal National in order to try to help their teammate Johnny O'Mara in his efforts to beat Kawasaki's Jeff Ward for the 250 title. Ward had a 20-point lead going in, and the hope was that O'Mara would win and Bailey and Lechien, as well as Bob Hannah, could get in between him and Wardy and give the O'Show a shot at the title. Glover, on the other hand, was nursing an injury and decided to just sit the race out. So what happened?

Yamaha Support rider Eric Eaton, a Washougal regular from Tacoma, Washington, won the 500 National with 1-2 moto scores, topping Kawasaki's Billy Liles and Honda Support rider Jo Jo Keller. And in the 125 Class Suzuki's AJ Whiting bettered his teammate Erik Kehoe and Kawasaki's rookie Eddie Warren. For Eaton and Whiting, those were the only major wins of their professional careers.

As for the 250 Class, Ward, just eight days past winning the 1985 AMA Supercross Championship, went out and beat them all anyway. He won the first moto, with O'Mara second, effectively making it all a moot point. Lechien was leading the second moto and slowed to let O'Mara by, which have him the overall win while Ward cruised in third. As for Bailey, he just pulled off in the last moto because the dust was so bad in the late afternoon of a long, strange day at Washougal.

Coincidentally, local hero Eric Eaton was featured on the advertising for the '85 Washougal National, which he won.

Yamaha's Kevin Windham topped the Broome-Tioga 125 National on his Yamaha YZ125, topping the Honda of Steve Lamson and as well as his older Yamaha teammate John Dowd. In the 250 Class reigning AMA 250 National Motocross Champion Jeremy McGrath of Team Honda took the win over his title rival Jeff Emig of Team Kawasaki, MC going 1-1 to Fro's 2-2.

Ricky Carmichael's perfect season continues as he wins the Broome-Tioga 250 National aboard a factory Honda CR250. The moto wins marked the 21st and 22nd in a row, on his way to a perfect 24-0 moto tally and all 12 overall wins. This is the first of three undefeated summers for RC, as he will also do the trick in '04 and '05. Second is Mike LaRocco, third Sobe Suzuki-backed Sean Hamblin.

In the 125 Class James Stewart swept both motos to take another overall win. Like Carmichael, the Kawasaki-backed Stewart had already clinched the title by this point. Suzuki's Branden Jesseman finished second overall, Honda rider Ernesto Fonseca was third.