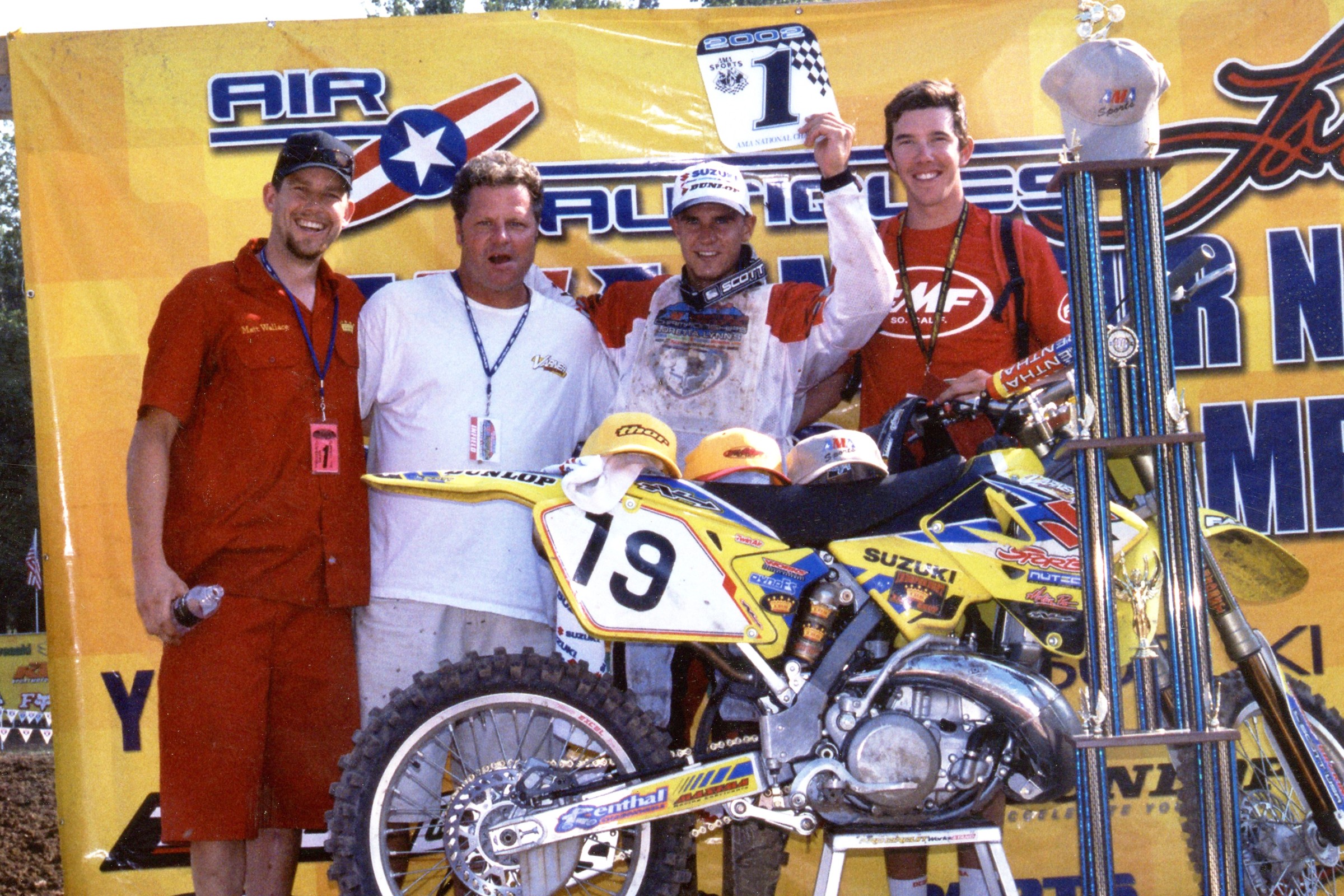 Where Are Evan Laughridge

The Nicky Hayden AMA Horizon Award: Superstars like James Stewart, Travis Pastrana, Davi Millsaps, Mike Alessi, Ryan Villopoto, Trey Canard, Dean Wilson, Jason Anderson, and more have all been recipients of it in before turning pro. The AMA hands the award out at closing ceremonies each year at the Rocky Mountain ATV/MC Amateur National Motocross Championship at Loretta Lynn’s Ranch. But not every young racer who earns it reaches the upper echelons of the sport. Evan Laughridge, who won it in 2002, is one of them.

After a short career that spanned just a few years, Laughridge disappeared from professional racing just as quickly as he’d stormed his way to amateur greatness in 2002. With racing at Loretta Lynn’s wrapping up yet again just a few weeks ago, we decided it was time to get in touch with Laughridge to see what he’s up to these days.

Racer X: First, for the readers out there who might not be familiar with you, give us a rundown on your career as a racer, starting with winning the Horizon Award at Loretta Lynn’s.
Evan Laughridge: At the end of ’01, I got a ride with Suzuki in their amateur program for 2002. I had good bikes, good equipment, good suspension, and everything kind of clicked that year. I did all the local races with Tallon Vohland, which probably helped the most, just racing with him every weekend. I built my speed that way, so for the people who knew me, it didn’t come as a surprise when I started doing well, although not many people knew me.

So then you went out and won the Horizon Award in 2002?
Yeah. I won pretty much everything that year. The two nationals in Texas, the World Mini Grand Prix, I got second to [Jeremy] McGrath at Mammoth, I won Ponca City, pretty much handled everybody that year.

So after winning the Horizon Award, you went pro with Factory Suzuki?
I was just on their amateur team; they kind of screwed me.

I thought you ended up on the factory team after Loretta’s in 2002.
That’s not what happened. At Loretta’s they were like, “Dude, you have to win these titles and get the Horizon Award and we’ll put you on”’ Cole Gress [team manager] said he’d put me on the MotoWorld team. So I won the titles and the Horizon Award, then pretty much felt like I got slapped in the face. They pretty much said, “Oh, never mind, we’re not going to do that, but we have a spot open on the arenacross team.” I didn’t know what to do. I was back at work, back home in Chico [Northern California] and not knowing what to do. They said they needed to know, so I went ahead and took the offer. I didn’t sign anything, I just agreed verbally.

Then the biggest mistake of my life came half an hour later when Mitch Payton called me. He asked if I could come down and ride one of his bikes. From a very young age, my dad always taught me the only thing you have in life is your word, and I’d already given my word to Suzuki. Hindsight being 20-20 and now knowing how the industry works, that was the biggest mistake I’ve ever made. A few years later I did get to work with Mitch, and I think he always respected me for telling him straight up. I told him, “I’d love to, you have the best team you could ever ride for, but I gave my word and that means a lot to me.” That kind of screwed my whole deal up, but I met a lot of nice people.

How’d arenacross go for you?
It was up and down. The first main event on the first night of racing I got second and thought I was going to just steamroll. But arenacross is a tough sport; you get banged up pretty good. I hurt my ankle, had a bum wrist. It was tough. But I was teammates with Buddy Antunez, so that was cool. I learned the ropes from him and he turned me into an aggressive rider.

Did Buddy teach you the ropes off the track as well?
[Laughs] I don’t know. Maybe. Anyway, I also rode for the Escondido Cycle Center for half a year, but it was a joke and I couldn’t do it anymore. Bikes were breaking and people were promising you things that wouldn’t happen.

It’s that time of year. Not to many of these out there

And in the meantime, it’s making you look bad on paper.
Yeah, well, the owner of the shop was a really nice guy, but everyone around him on the team… I don’t like to say anything bad about people, but you could ask anyone else on that team and they’d probably tell you the same thing. It was a joke [chuckles].

You ended up doing some nationals, right?
In 2004 I started the nationals with them [ECC], and about halfway through I just asked if I could get out of my contract. The team I rode for previously, I’d won a championship up in Canada in ’03, and I called those guys up and asked if I could come ride for them. They said yes, so I talked to the owner and got out of that contract and went up to Canada for the rest of the year. I was always fast; I just never had good luck at the nationals.

Your last result was a tenth overall at Steel City.
Yeah, that was Steel City in 2005, and me and [Michael] Byrne were the only two guys left on two-strokes. So to me, that was almost better than a tenth because the four-strokes were just killing it. But, Kawasaki didn’t have one yet, so we rode two-strokes. It was fast, Mitch Payton built me a really fast bike that year, but man, if it didn’t blow up, it ran out of gas. It was a struggle. Then I went to Europe that winter, did pretty good in Germany and won a lot of races, and was planning on coming back and racing supercross with a ride I had lined up. Then, my last night in Germany, I busted my ankle and never really recovered from that. After six months of it still being swollen up and not being able to ride, I just called it. As fast as I came in, I went out [laughs].

Talk about what you’re up to now. You work at the family business, right?
Yeah, I’ve been working here [Jessie Machine Works] since I was about seven or eight. So when I was in my career transition, my dad pretty much asked if I was going to stay in Southern California or if I was interested in coming back to work at the shop here [in Chico]. If I wasn’t, he was going to sell the business and retire. So I figured I had an opportunity to keep the business going and not have to worry about getting injured all the time.

Do you ride much anymore?
No. I can’t really afford to get hurt anymore, and I’ve got other stuff going on these days. I rode motorcycles my whole life growing up, and when I was professional, it was every day. I didn’t get burned out, but there are just other things now. Before I never got to go fishing with my buddies, or hunting—it was just racing, racing, racing. Now I have a wife and two kids and we go Jeeping, or we’ll take the boat out and go fishing, deer hunting. There are a lot of different things to do in life than riding motorcycles.

What exactly do you do at work?
Mainly metal work; we’re fabricators. We build harvest equipment for the nut industry—lots of conveyors, bank out wagons, self-unloading carts, just anything steel for the ag industry. It’s not just the nut industry, though—corn, wheat, salt, sand, anything you need to convey, we specialize in it.

What advice would you give to amateurs in this sport on the verge of turning pro?
Man, that’s a tough one. This is going to sound really bad, but I wouldn’t trust anyone’s word for anything. I met a lot of cool people in the industry whose word was good, but I think I ruined my career by trusting people who didn’t come through. If I would have gone down and talked to Mitch, rode one of his bikes and gotten signed onto that team, my career would have… Well I don’t know, has anyone’s career ever gone down on that team?

Get the Latest FROM Racer x