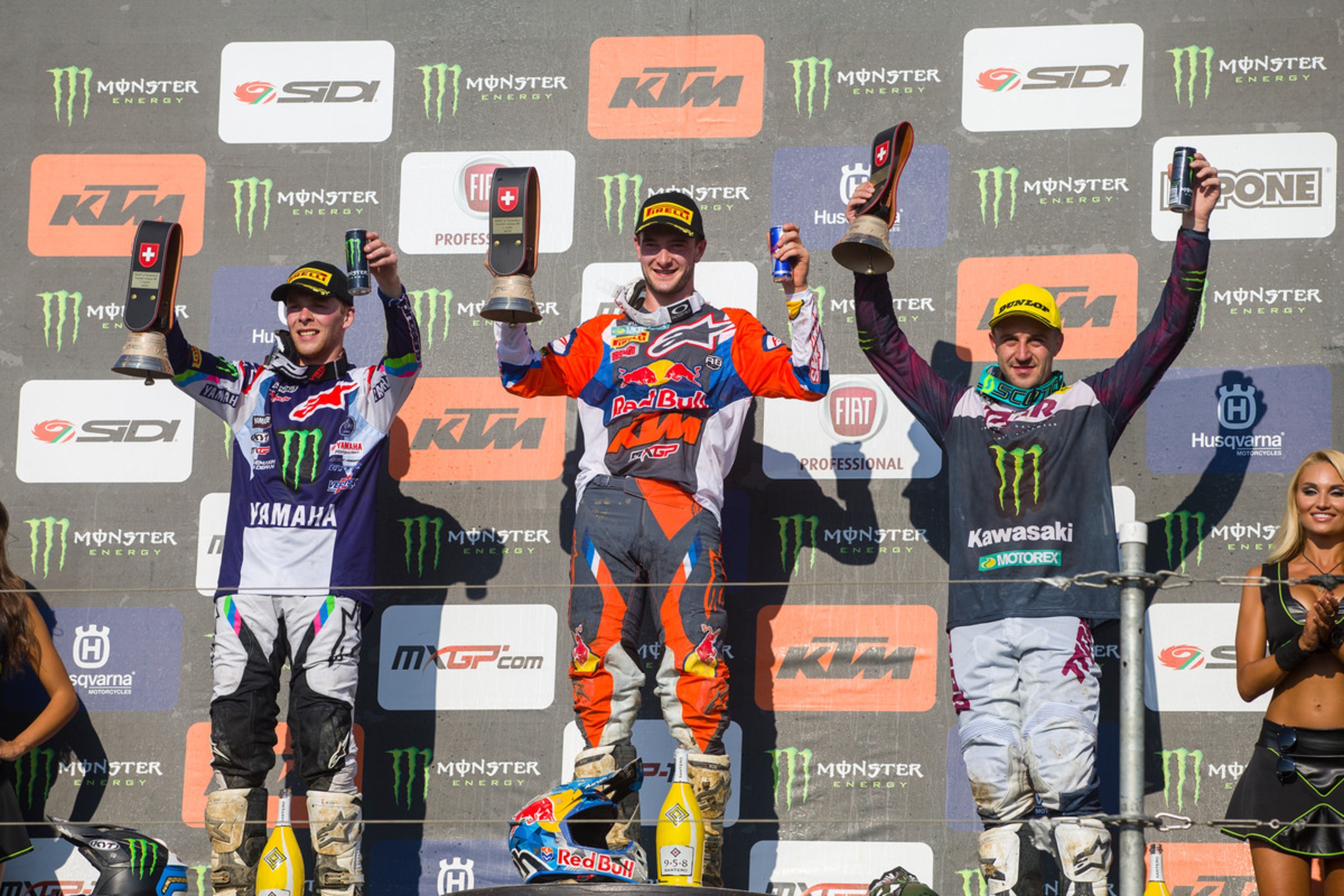 GP Report 3 Things We Learned from the MXGP of Switzerland

MXGP began the dash to the flag with a vibrant Swiss GP being the first of three back-to-back events in the final five fixtures of 2018. Frauenfeld-Gachnang hosted another memorable race for the third year in a row before the FIM Motocross World Championship bounces from the old (Sevlievo in Bulgaria for the first visit since 2014 next week) to the brand new (Afyonkarahisar in Turkey ready for a Grand Prix debut). Here’s what happened at the venue close to Zurich.

There were rumors at the beginning of the season that the third Swiss Grand Prix to be staged at the purpose-built Frauenfeld-Gachnang site was under threat from a local protest. The organizational powers behind the event solved the issue by late spring, and the third edition at this dispersed but impressive facility again filled the role as one of the standout spectacles on a long MXGP calendar. There are two factors that created the good vibe at this 16th round of 20: the course itself and the crowd. Once again, the public turned out in noisy, flag-draped droves and roared their approval for Wilvo Yamaha’s Jeremy Seewer and basked in some humid and sunny conditions. Weirdly, this Grand Prix again had to cope with an unstable climate. Heavy rain Friday night softened the Swiss soil—similar occurrences had happened in 2016 and 2017—but race day escaped unscathed and August temperatures flared.

The sun helped the attendance, but the rain helped the mainly flat, fast, and contained trajectory. By the time of the second moto, the dirt was wreck of ruts, bumps, and holes. It was technical, demanding, and strategic stuff. Certain riders and their skills came to the fore, and the physicality of the endlessly churned soil also saw several athletes fade away toward the end of the second moto. Jeffrey Herlings described his latest 1-1 (the 11th from 13 overall wins) as “pretty amazing,” considering the track was “a tough one” for the Dutchman. Certain racers, like Rockstar Energy IceOne Husqvarna’s Max Anstie, seemed to revel: The 2016 MX2 winner at Frauenfeld was particularly eye-catching as he plotted a trek back from a start straight incident in the first moto that left him deep in the pack to reach sixth place.

The Swiss GP is helmed by a well-known figure in the industry, Willy Laderach, who has been working to make the race more sustainable in terms of shifting the “temporary” nature of the circuit to something lasting. With the amount of fans trackside (and able to get reasonably close to the action) and Seewer set to be a works Yamaha rider in 2019, there is a feeling of potential longevity in the air. Next year seems distant, but Frauenfeld is rapidly becoming one of the must-see MXGP dates on the schedule.

There was a smile on Jeffrey Herlings face when it was pointed out to the Red Bull KTM rider and undisputed leader of MXGP that he’d reached a total of 80 career Grand Prix wins (and is still only 23). With his tally of 25 moto triumphs from a maximum possible total of 32 (30 in his case, as he missed the Grand Prix of Lombardia due to that broken collarbone), 13 wins, and two runner-up finishes, Herlings is slam-dunking MXGP as the championship hurries to a conclusion. Another stat? Try his 733 points from a possible 800—and you have to discount the 50 he might have taken at Ottobiano, which, in contrast to Frauenfeld, he claims is one of his favorite tracks.

Herlings is nearing the big 101, and the fact that the seemingly impossible quantity accumulated by former team manager (and something of a spiritual nemesis) Stefan Everts is coming closer, is a hand-rubbing target for #84. His remark “21 to go” was revealing and shows his long-term ambition in this sport. The knowledge that he is unlikely to eclipse Everts’ ten titles (or maybe even Cairoli’s nine) came through some of his revealing comments. He spoke of the sacrifices needed to operate at his level for a Grand Prix season that presents more chances to win compared to Everts era, but also provides plenty of opportunities to throw it away.

“As long as I win this thing, then I don't care if it’s by one point or 200. It will be a lot of weight off my shoulders,” he said, referring to the new gap of 58 points over teammate Antonio Cairoli, who crashed in the first moto, twisted his knee, and finished seventh overall. “I’ve been living like a monk this year, and every week I leave nothing on the table to try and win this championship.”

Herlings’ brilliance is tempered by a humility that makes the cocky Dutch kid of old a long-gone figure. “My rival didn't have the best of GPs. I heard he crashed, and I hope he is okay and 100 percent—we don't wish anyone any injuries.”

He had to overcome a competitive Monster Energy Kawasaki’s Clement Desalle and Monster Energy Yamaha’s Romain Febvre, with HRC’s Tim Gajser also looking lively when he stayed on the CRF450R. Herlings credited both the Belgian and the Frenchman who joined him on the podium; Febvre in particular looking something like the force that romped free of the pack in 2015. “Since Lommel [round 15 in Belgium two weeks ago], we made some changes to engine for better starts and it works well overall,” Febvre said. “It is much easier to be at the front! I knew I had the speed all weekend long.”

Herlings could wrap the championship in two Grands Prix time at Assen in front of his home crowd if the points margin stays in the same realm (Cairoli will have a check on his knee this week, but knows too well how a ruptured knee ligament feels after a similar injury curtailed his last MX2 season in 2008). “There is nothing more beautiful than being world champion, but to do it in your home country… I don't want to think about it!” Herlings said of the prospect of a third MXGP champion being crowned in the Netherlands in the last four years.

Twenty-one holeshots from a possible 32 is a helluva lot of launches. It is this weapon in Jorge Prado’s arsenal that has helped the 17-year-old Spaniard to the top of the world in MX2 and made him something of a second-moto master. The Red Bull KTM man has won in the latter half of the race program eight times from his total of 12 victories this season, and his getaways have been a major factor.

His first-moto tussle with teammate and returning-to-form world champion Pauls Jonass was arguably the pick of the entertainment at Frauenfeld, and he lost that duel to the Latvian. In the second moto, he avoided a reprise by building a strong advantage while Jonass struggled to demote Kemea Yamaha’s Ben Watson. Even though he was struck by a strange breathing problem that caused a lot of pain and meant he slowed in the last three laps, Prado had done enough work to win his fourth Grand Prix in a row.

Both riders slugged it out and finished with the same points for the second time in 2018, and they appeared on the podium together for the eighth occasion. The gap in the championship holds at 28 with the sense that this one could go down to the final round for the second year in succession if Jonass continues to hold this kind of form together. The fast hard-pack of Sevlievo next weekend could be timely for #1 to strike back.

Not able to match Prado’s starts but standing out in MX2 was Honda 114 Motorsports Hunter Lawrence. The soon-to-depart Australian seems to be gaining ground after recent injury hassles, and the choppy nature of Frauenfeld helped in narrowing the field. “I don't lose so much in horsepower to the KTM and Husky guys,” he said of his third position and just his second podium appearance of a final MX2 term. Credit to Kemea Yamaha’s Anthony Rodriguez. The Venezuelan and replacement for the eternally luckless Seva Brylyakov scored a Grand Prix best with fourth in the first moto and fifth overall.

Bulgaria awaits. MXGP returns to the vast hills of Sevlievo this week for what is the first part of a long trip to Turkey to end this triple. It might only be four years since the championship ventured to the remote depths of eastern Europe, but for some perspective, the last time Jorge Prado competed on the hard-pack, he was claiming the 65cc European Championship.