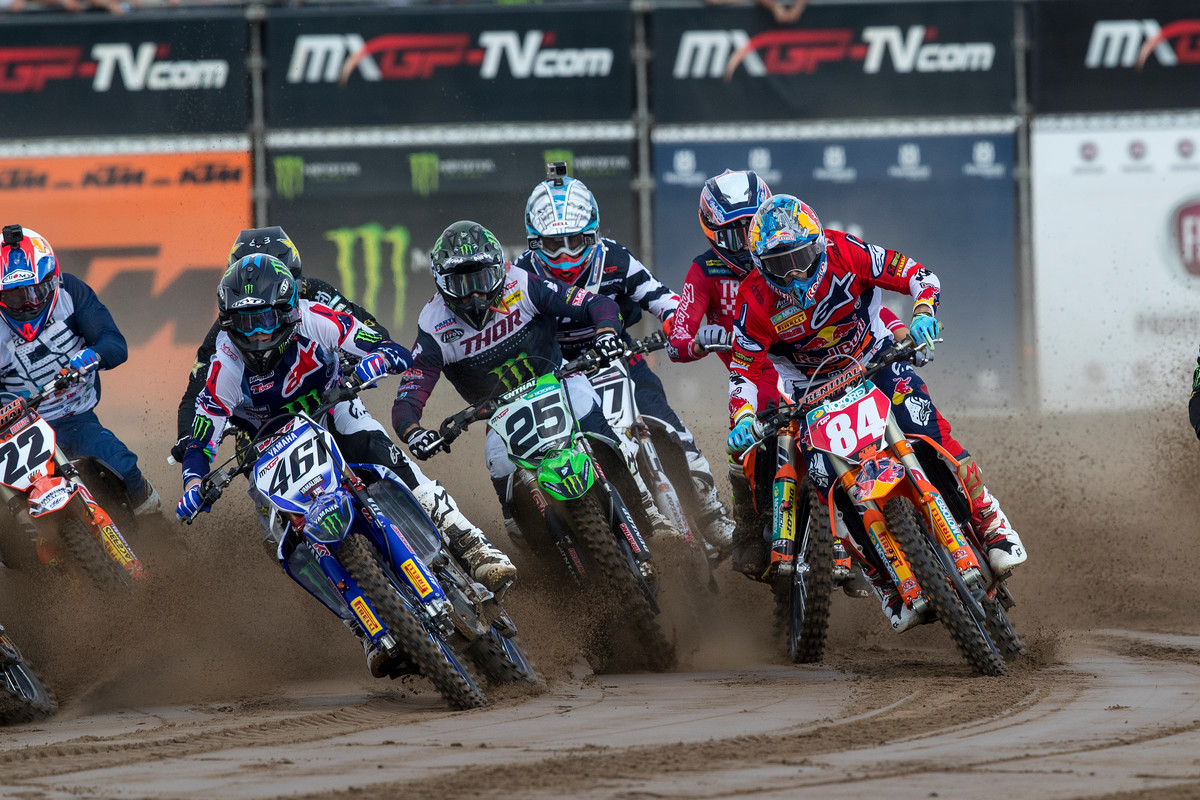 GP Report 4 Things We Learned from the MXGP of Belgium

For the fifth year in a row, Lommel terrorized the Grand Prix pack as the deepest sand track churned into a sea of bumps and holes once more. Of course, the elite of MXGP somehow (inexplicably) relish this challenge, and it was a stage for Red Bull KTM’s Jeffrey Herlings and an authentic repeat of his annual sandy masterclass.

On a glorious day of weather and a packed venue, MXGP remembered one legend with a video tribute and various banner photos around the circuit on what would have been Eric Geboers’ 56th birthday. It also witnessed the blossoming of another, as Herlings took a ninth 1-1 in what was a 12th win from 13—23 motos from 30—and the knowledge that he has only dropped 17 points from the absolute maximum so far this term (discounting the GP of Lombardia he missed due to collarbone surgery).

Here's what went down at a hot and sunny Belgium.

Just before the start of the first MXGP moto, the gate and waiting zone was a typically busy spot, buzzing with team staff, guests, media, and onlookers. As the one-minute warning was sounded by the FIM, Red Bull KTM were there, the #84 450 SX-F was primed in the first slot… but Jeffrey Herlings was nowhere to be seen. Those of us who noted the brief absence could not resist a few smiles: Maybe the championship leader was just going to send his bike out by itself. Maybe he’d already started walking around the course. Perhaps Herlings was so fast he’d already finished.

It was a moment of levity, but the sentiment kind of rang true. Herlings walked away from Lommel a few hours later having headed every session, qualification, and moto and having decimated the opposition mere minutes into each race. He had a seven-second lead by lap two of the first outing alone.

Just as Lommel is gaining a reputation as the baddest MXGP of them all and the one event that inches closer to a bucket list motocross experience, so is Herlings’ legend on the terrain equally gaining more credence and myth. His repeated belief, confidence, and acumen on the sand means that any visit to Lommel with a fit Dutchman performing is a chance to see something very special. Herlings has no castle of sand; it is more like a solidified fortress.

With this pedigree and having seen firsthand his potential on the KTM last year (a bike Herlings is now describing as “perfect”), Cairoli knew his chances of a shock were slim to none. The world champion was still wrestling the effects of a left thumb injury—more the consequences for his sand prep—and admitted that he would have liked to be closer to Herlings, but this was a “no contest.” Herlings even managed to tip off in each moto and surrender some seconds, but this was the surest 50-point bet of the season.

If there was one element that took away the gloss, then all the work and superiority by the winner still only meant a measly six-point gain in the championship. Herlings later stated his disbelief that his record of results this season has given him less than a Grand Prix advantage, but this also confirms that he is beating a Cairoli who is nearly top-song. After , the Sicilian has only missed the podium on two occasions all year.

Joy and welcome relief were familiar sensations for Rockstar Energy Husqvarna’s Max Anstie. The Brit emerged triumphant from the three-rider tussle for the last podium spot in the second moto as just one point split the efforts of Red Bull KTM’s Glenn Coldenhoff (the Dutchman so close to helping the Austrian team rule the entire MXGP rostrum for the second year in a row at Lommel) and Monster Energy Yamaha’s Romain Febvre. The Frenchman was fourth overall and looked his most competitive at Lommel since his title-winning year in 2015. He admitted that a nervy different direction with engine setup turned out for the best. Febvre struggled through the first phases of 2017 after some missteps in the winter with the setting of the YZ450FM made life very difficult on track and necessitated a lot of re-thinking. The work and guidance of Michele Rinaldi’s crew paid off on this occasion, as Febvre managed the required starts and could manhandle the Yamaha.

He actually passed Anstie at one point in the second race after a small crash meant he had to catch back up, but #99 fought him off. Anstie has an unusual milestone at Lommel, thanks to his three consecutive wins in the MX2 class with three different motorcycles. His podium on Sunday was the second of 2018; the first also having come in the sand at Ottobiano in June.

Anstie is perhaps at the top of the pecking order when it comes to contracts for 2019 and could be set for yet another team switch. Rumors indicate that his time at Husqvarna is coming to an end, and paddock talk has him linked either with HRC or Yamaha and Shaun Simpson’s seat at Wilvo. When asked about the situation on Sunday afternoon, the 2017 Motocross of Nations star smartly palmed away the inquiry. The IceOne squad might be set for an all-change if Gautier Paulin also fancies a new scene. The Frenchman rode from the back of the pack both times to go 13-13 and well off his usual form and potency; Paulin won in the sand in 2015 and 2017 at Valkenswaard. Paulin said to us that indecision on what to do with his future and trouble to nail good starts had been affecting his racing in recent weeks. Could Team France even consider dropping their talisman with another embarrassment of riches to choose from this year for RedBud?

Props to reigning British Motocross Champion Hitachi ASA KTM UK’s Graeme Irwin for 13th place and his best result of a debut MXGP season. What made the Northern Irishman’s classification more eye-catching was his company in the overall list: Clement Desalle, Shaun Simpson, Kevin Strijbos, Evgeny Bobryshev, Tanel Leok, Jordi Tixier (at last free from injury and returning to the track again). All are Grand Prix winners and strong experienced pros with hundreds and thousands of laps logged at Lommel over the years.

Simpson and Strijbos—winners of this Grand Prix in 2015 and 2016, respectively, and until Herlings climbed into the division—showed some of the old magic. Strijbos was unlucky with a second moto tumble but he was flying in the top ten in the first race and recorded just his fifth top-ten of the year with ninth. Strijbos’ saddle at Standing Construct KTM (rapidly becoming a satellite team, thanks to their signature of Glenn Coldenhoff for 2019) is coveted by many in the paddock, particularly with the 450 SX-F clearly appearing to be the bike to have. Lommel 2018 could well be the Belgian’s last appearance as a full-time MXGP racer.

Simpson went down on the third corner of the first moto, but his comeback from last place to 11th was perhaps the performance of the race and delivered some well overdue buzz for the 30- year-old, who has been wading through a stop-start process with injury since winning the 2017 Grand Prix of Indonesia.

A quiet day for Monster Energy Kawasaki’s Desalle means the picture for third place in the MXGP championship is narrowing. Just 35 points split the Belgian from Team Honda HRC’s Tim Gajser and Romain Febvre in fifth.

4. Watch out again for the new one

Red Bull KTM’s Jorge Prado went 1-1 in MX2 to ensure that the team not only replayed their results from 2017, but also two weeks previously in the Czech Republic. MX2 World Champion Pauls Jonass looked full of intent in practice, but it was Prado who gained the qualification heat win, holeshots (he now has 19 from a possible 30), and both races at a comfortable canter. Jonass’ crash in the first moto while closely following Prado and then trying to avoid a backmarker (a constant problem for the leaders in both classes because of the high-speed differential, and the track team at Lommel could perhaps review their blue flag process) damaged his clutch briefly and dashed his plan of a late-race attack. Jonass was situated next to Brent Van Doninck, who leapt so early out of the gate for the second moto that he bunny-hopped right over it, and the Latvian was jolted to distraction.

A 4-6 conceded more points to Prado, but the champion was remaining stoic of the deficit of 28 and pointed out that there are still 250 points on the table. It was the third time in the last four rounds that Jonass has missed the podium. He pointed to instances of bad luck, citing the backmarker and Van Doninck in Lommel, and also called out talk of him being distracted by the prospect of MXGP in 2019 as “bullshit."

Prado is a real threat, though. Any video footage of the Spaniard will show his upright and Dungey-esque style making the sand look like a calm Sunday ride-out. There are no signs of the physical frailty that made him such a frustrating sight in 2017 and his rookie term. With the weight of the De Carli camp in his corner, Prado now just has to manage pressure and the fast countdown of races, with just three free weekends until the season wraps in RedBud. In a separate interview over the weekend, the 17-year-old confirmed that—title or not—he has shelved plans to head to AMA competition and supercross; such is his level of content within the Italian faction of Red Bull KTM.

So happy to get the WIN ?here in Lommel ?? Thanks to everyone for the support !! | Muy contento con la victoria ? Gracias a todos por el apoyo ??

Rockstar Energy Husqvarna’s Thomas Covington signed off his official duties at Lommel (Jacky Martens’ team is based next door to the facility) with second place overall and his fifth podium from the last six rounds. It was also the fifth time this season that TC has classified as a runner-up, and the urge to wrap MX2 with a taste of victory is becoming more acute as the calendar days trickle away. Covington is making good gains in the championship since recovering the disruption of his knee injury, but he needs a hefty 75 points to catch teammate Thomas Kjer Olsen for the bronze medal; the Dane was third at Lommel for his seventh trophy of 2018 but just the second from the latter half of the season.

Hitachi Asa KTM UK’s Conrad Mewse showed good speed and is rumored to be sitting alongside Darian Sanayei for 2019 on the rapid Bike It DRT Kawasaki, but it was another youngster that really parted the sand at Lommel. Kemea Yamaha’s Jago Geerts was cheered by the locals all the way to second place in the second moto. The teenager and Grand Prix rookie equalled a career-best result at his home fixture and further established his billing as not only the most exciting new prospect in MX2, but a real hope for Belgian motocross.

A week of recovery and a return to the hard pack will allow MXGP to get ready for the run across Switzerland, Bulgaria, and Turkey this month.