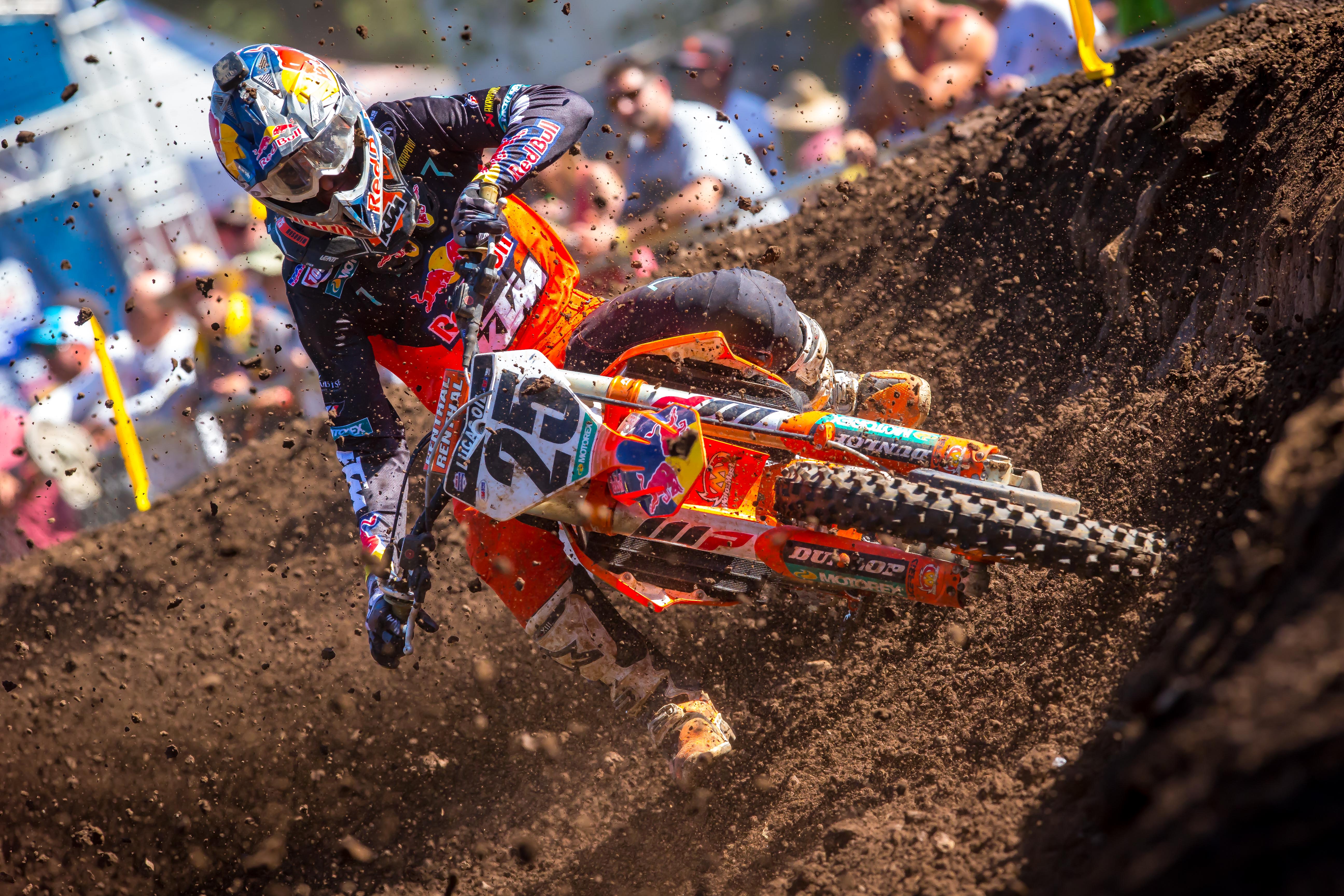 Washougal is arguably the most scenic track on the Lucas Oil Pro Motocross schedule. The large trees of the Pacific Northwest sure are nice to look at, but they also mean the riders have to battle with extreme shadows all day.

Eli Tomac didn't seem to have any troubles with the shadows, as he went 1-1 after another dominant late moto charge in moto two, stealing the a moto win from Ken Roczen and extending his points lead over Marvin Musquin.

In the 250 Class, Aaron Plessinger grabbed an unlikely overall win with 4-3 moto scores and pushed his championship lead out to a commanding 59 points.

Let’s dive into the lap data to figure out how these races were won and lost and how the final three rounds of the season are shaping up with this week’s Sign of the (Lap) Times. First, our traditional lap time charts.

Apart from his two poor motos at RedBud, Tomac has been dominant all season long—except out of the starting gate. Through 18 motos, Tomac has gotten only one holeshot and his average starting position is 5.3. That average doesn't seem that great, but when you compare it to last year's average of 8.4, it's clear Tomac has made some progress on gaining positions on lap one.

Despite not getting out of the gate early, Tomac has led by far the most laps of any 450 rider this season, spending a little under half of the total amount of laps out front in clean air. It just goes to show how quickly and effortlessly Tomac has been able to make passes this year.

For as much as Tomac's struggles out the gate have been mentioned this year, Musquin hasn't been much better. He's taken zero holeshots and has an average start position of 5.2, almost identical to Tomac. But thanks to his consistency, he's earned himself the best average finish in the 450 Class with a 2.4 and finds himself 15 points behind Tomac in the championship with six motos to go.

With three rounds (Unadilla, Budds Creek, and Ironman) still on the schedule and 150 points up for grabs, I wanted to go back in the vault to see how Tomac and Musquin have fared at these tracks throughout their careers. (Note: Both riders have only raced Ironman twice.)

Going into the final stretch, Musquin appears to have a very, very slight advantage if you are going by past results. Unadilla is well-known as the most European-style track on the schedule and the rutted nature of the track seems to fit Musquin's style, but Tomac has shown he knows how to handle the ruts and rocks of 'Dilla just fine.

Will Musquin gain any ground on Tomac over the final three rounds?

Justin Barcia and Ken Roczen both have compelling, yet very different, comeback stories for 2018. Barcia was without a ride before the 2018 supercross season started and was potentially going to be watching the races from his couch if something didn't work out. Eventually he worked his way back into a full-time Factory Yamaha ride and has cemented himself as a podium contender this outdoor season.

Roczen was just fighting to keep his arm attached to his body a little over a year ago, and we weren't really sure how this outdoor season would go for him. Would the arm and fitness be a problem in the heat of summer, or would he eventually be able to race back into shape? Well, he's not dominating motos like in 2016, but he's now racked up six moto podiums in a row and finds himself tied with Barcia in the championship at 330 points. Both riders have exceeded the expectations of many, but who will grab the final spot on the championship podium?

Who completes their comeback season by nabbing third place in the championship?