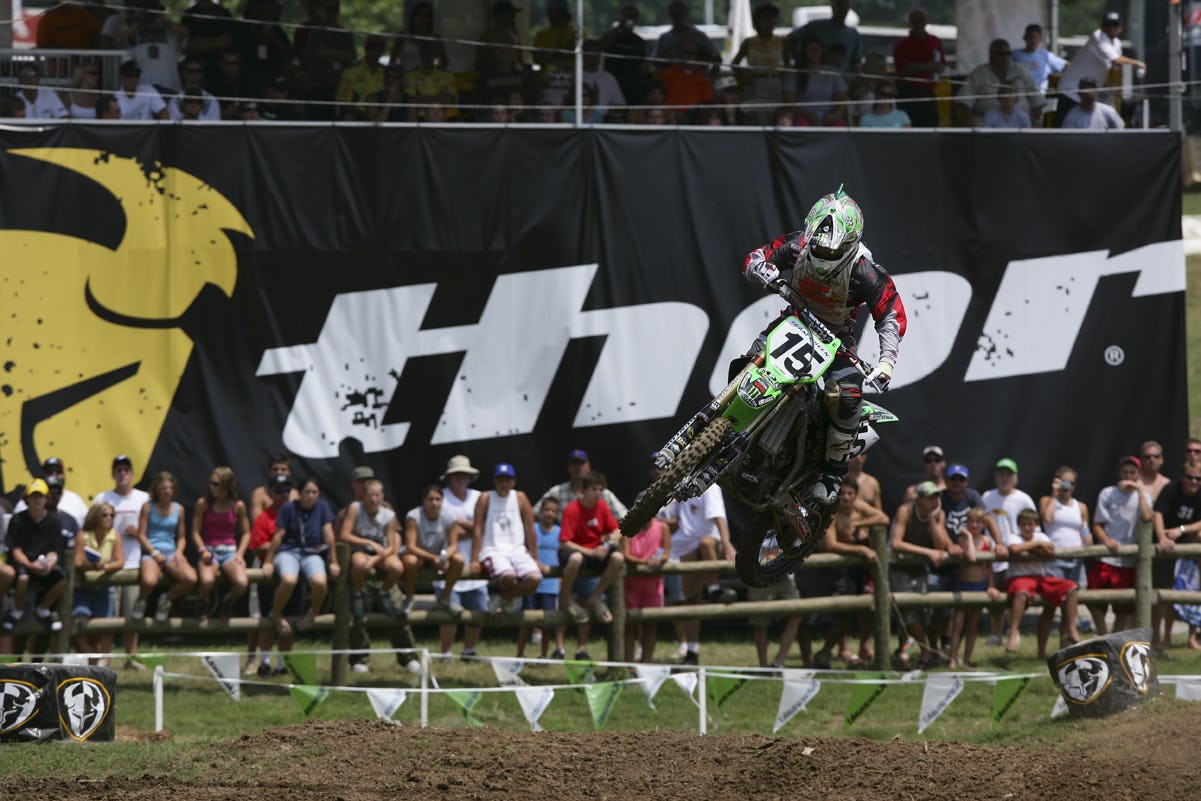 On This Day in Moto August 1

The first day of the 2005 AMA Amateur National Motocross Championship at Loretta Lynn's got underway, and three young riders would make quite the impression on everyone. Kawasaki Team Green's Ryan Villopoto and Suzuki support riders Jason Lawrence and Ryan Dungey would all win classes, with the wins for Villopoto and Dungey marking their one and only titles at the Ranch. Obviously, they would be much, much more successful in the years to come as pros. Lawrence won multiple titles at the Ranch, including the 125 A/Pro Sport class ahead of Villopoto. He, on the other hand, would only win a single title as a pro—the 2008 Lites West Region over Dungey.

In a race that was hoped to mark a home win by either one of two American riders on the 250cc FIM Motocross World Championship circuit, title contender Danny LaPorte or GP winner Mike Guerra, the U.S. round at Unadilla became historic for another reason: It saw KTM's first major moto win in America. Dutch rider Kees Van der Ven emerged with the overall win, marking the first time KTM (or before that, Penton) stood atop a podium in this country. Van der Ven went 3-1 to top the 2-3 of Yamaha's teenage prospect Ricky Johnson, the 4-2 of soon-to-be World Champ LaPorte, and the 1-6 of Team Honda's David Bailey.

And in Sweden at the 125cc Grand Prix, Suzuki's Eric Geboers clinched his first FIM Motocross World Championship, taking the #1 plate away from his older teammate Harry Everts, the father of future King of Motocross Stefan Everts.

At Delta Motorsports Park in Ohio (which is one of the oldest continuously running tracks in America), Bob "Hurricane" Hannah won the 125 National over Suzuki's Danny LaPorte and Husqvarna rider Arco Englund, who hailed from Colorado. Honda's Marty Smith, the defending 125 National Champ, and Yamaha's Broc Glover, the future 125 National Champ, rounded out the top five. Hannah went 2-1 in the motos while Smith went 10-1. After the race, a privateer tried to claim Smith's Type-2 RC 125 Honda for $2,000, then the going rate for a claim. Eight counterclaims were immediately filed by the OEMs, so numbers one through nine were written down. The privateer drew first, and he drew #9. Smith reached in, pulled out an eight, and kept his bike.

That same day at Unadilla, a 500 National ran, and Suzuki's Steve Stackable earned himself the overall win with 1-3 scores to top the 2-5 of Honda's Pierre Karsmakers and the 4-4 of his Suzuki teammate Tony DiStefano. Finishing fourth with 9-1 scores was Gary Semics.

And at the Citadel in Namur, Belgium, at the most famous motocross track in the world, Roger DeCoster raced to the win aboard his works Suzuki. He finished the motos 1-2 to top the 3-4 of American hopeful Brad Lackey. In winning the race, DeCoster clinched what would be his fifth and final FIM 500cc Motocross World Championship.