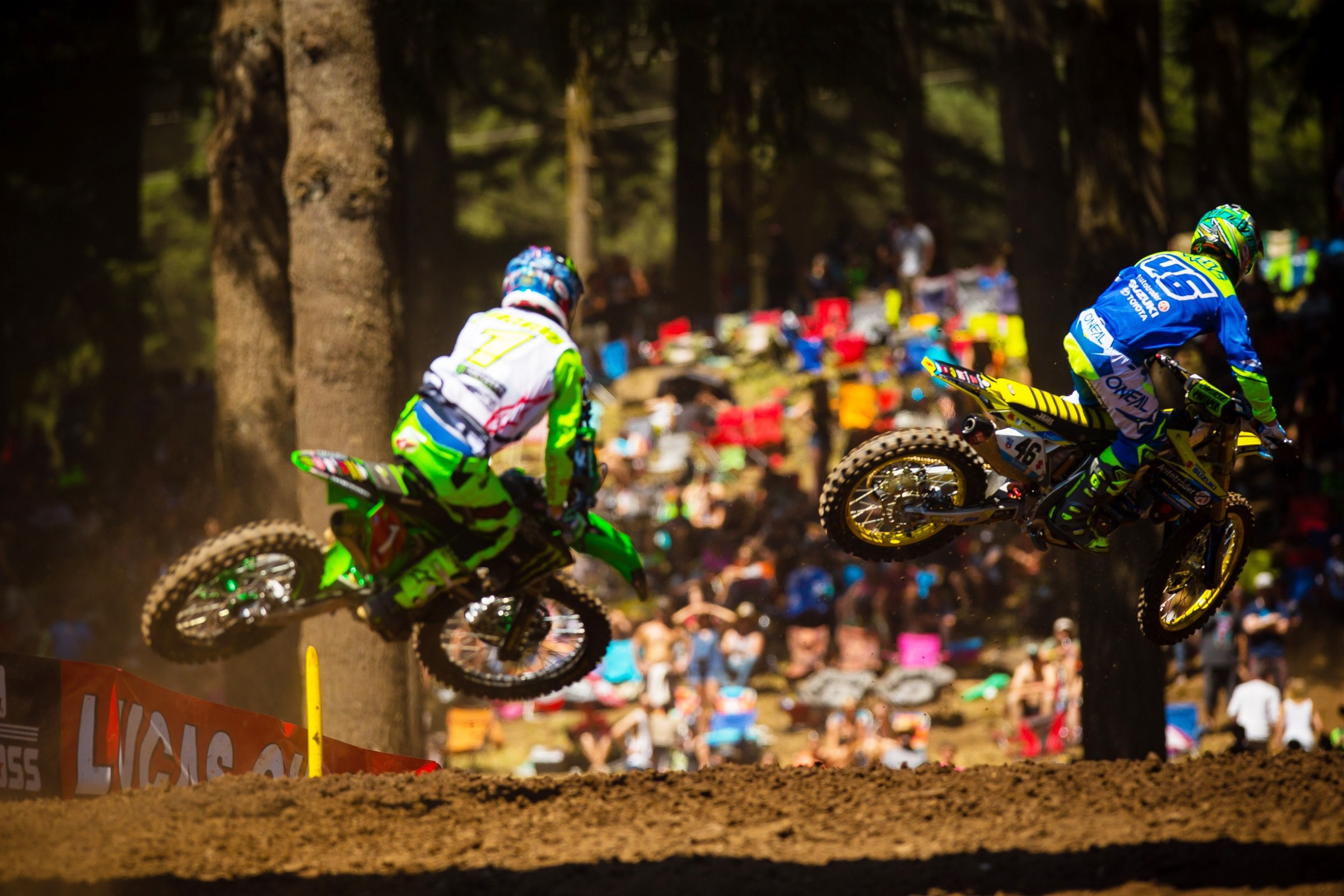 After all four motos of round nine of the Lucas Oil Pro Motocross Championship were said and done, Jason Thomas, veteran of 15-plus years of pro racing, grabbed some photos from the weekend in Washington to explain how things went.

Kyle Cunningham is shown below just before the mechanics’ area. This single jump was a new wrinkle for 2018 and had a couple of different viable approaches. In this picture, Kyle looks to be jumping pretty far from the left line. This option would result in a very hard landing, as shown by Eli Tomac several times in the second moto. It didn’t look like a fun or efficient option with that brutal landing, but if trying purely to turn a fast lap time, it could be utilized. The most common line was to the right of where Kyle was jumping from. The lower right-hand side allowed riders to stay low over the jump and carry momentum.

Cunningham may have chosen the left side early in the day, as this photo looks to be from timed qualifying. That would explain his line choice, as the right side was still too muddy to scrub effectively at high speed. As the jump is still soft and a bit unpredictable, he is positioned on the rear of the bike to fight off any potential endo. It also “appears” that he is seat-bouncing, but that’s an inaccurate assessment. Being shorter, the distance between his bum and the seat becomes scarce as he leans back. He is careful to not compress the shock here, which would shoot him further upward, but he is definitely using every bit of backward lean available.

Dakota Alix is rolling through the turn before the infamous Washougal whoops in the photo below. I use the phrase “rolling through” because it’s very telling of his technique. In this corner, traction is virtually nonexistent. The loose dirt has been blown off and it’s down to the hard base. Because traction has left the building, riders had to be super careful with applying throttle. In this scenario, riders try to carry as much momentum into and through the corner. That allows them to literally “roll” through the corner, applying little to zero throttle but still having decent corner speed. It takes great balance to roll into and through the corner with speed, but Washougal is all about going fast without breaking the rear tire loose. As Dakota crests that next whoop, he will sit down on the seat, hop over a whoop, and begin his rhythm that eventually turns into blitzing out.

Dakota’s technique of standing is also a very high-level move that every rider should utilize. Most riders would be sitting at this point of the turn, but it’s only costing them time and energy. The biggest benefit of standing here is going to be as he crests that first whoop. With his weight centered, the suspension won’t compress and want to rebound upward. That will allow his tires to drive forward sooner instead of the shock rebounding, catching a tiny bit of air over the whoop, having to regain traction, then drive. It’s a very subtle technique but is very effective. This move is very common for supercross tracks. When riders cut across the inside of a 90-degree turn, they will often need to single the first jump of a rhythm section before picking up their rhythm. When they cross the top of the single, standing allows them to soak up the rebound of the rear shock, keeping it lower and driving forward sooner. Sitting while rolling a single jump is the easiest and most common method, but also an easy place to gain some time on the stopwatch.

Say what you want about JG33, but he can turn it upside down as good as anyone. He leans off the jump face harder than most in the photo above, trusting his tires to hold. He then leans off the under side of the bike, allowing the natural momentum of the jump (from the lean on the takeoff) to continue up and out. As the pendulum of momentum swings back, he gently brings the tires back to center and lands cleanly. Most pro riders can whip it fairly well, but the few extra percent that makes his bike go from flat to upside down is where the boys are separated from the men.

These two photos are during the second moto as Eli Tomac was working to pass Justin Hill. He is going to the left and right side in the same section on consecutive laps, desperately searching for a way around. To get to the left and right, Eli was changing his line in the right-hand corner before the jump. He was hoping to get a run on Hill and out-drag race him up the following hill (pardon the pun).

Situations like this are common for Tomac. He hasn’t been consistent with his starts, and that’s leading to several passes to get to the front. He has also figured out that following the lead rider doesn’t make passing easier, and he is often using unorthodox lines in hopes of making a move. What’s incredible to me is when he uses a “slower” line and still makes a pass.

The photo below is the same jump where Tomac and Hill were battling over in the photos above. It’s also the same jump on which Trey Canard broke his femur in 2011, and also where Austin Forkner would take a big tumble in moto two this year. It’s a very simple jump, but as riders are attempting to stay as low as possible and carry as much speed as possible, things can get dicey.

The risk that bit both Canard and Forkner is just past the takeoff. There is a small rise just before the backside of the jump begins. For most, that rise is irrelevant and cleared easily with the height gained on the jump face. For the moto elite, however, they are staying so low that they barely crest that rise before descending to the downside and racing upward. The goal is to get back to the ground as quickly as possible, going as fast as possible when their tires touch down. With such a low trajectory, the danger is if the front tire catches the rise. As the bike is laid over to scrub that height, catching the front tire at this weird angle completely upsets the natural motion. In a normal lap, the front tire would stay low and to the rider’s right side, slowly floating back to the middle before landing. When it touches early, though, it whips back to the left unexpectedly.

Also, all of the rider’s momentum is shifted to the outside when he is expecting his lean to be toward the inside (right side). It’s very similar to a high-side crash in a corner. The rider is expecting all of the force to be inside, and suddenly, that energy is tossing him the opposite direction. The real danger is that this crash is completely unexpected on a relatively simple jump. The only way to get into big trouble is to scrub almost too well. Watching Forkner’s crash and Canard’s crash, both have that in common. They lean just a tiny bit too much and stay a tiny bit too low. In a flash, everything goes terribly wrong, as you can see in Canard's crash below.