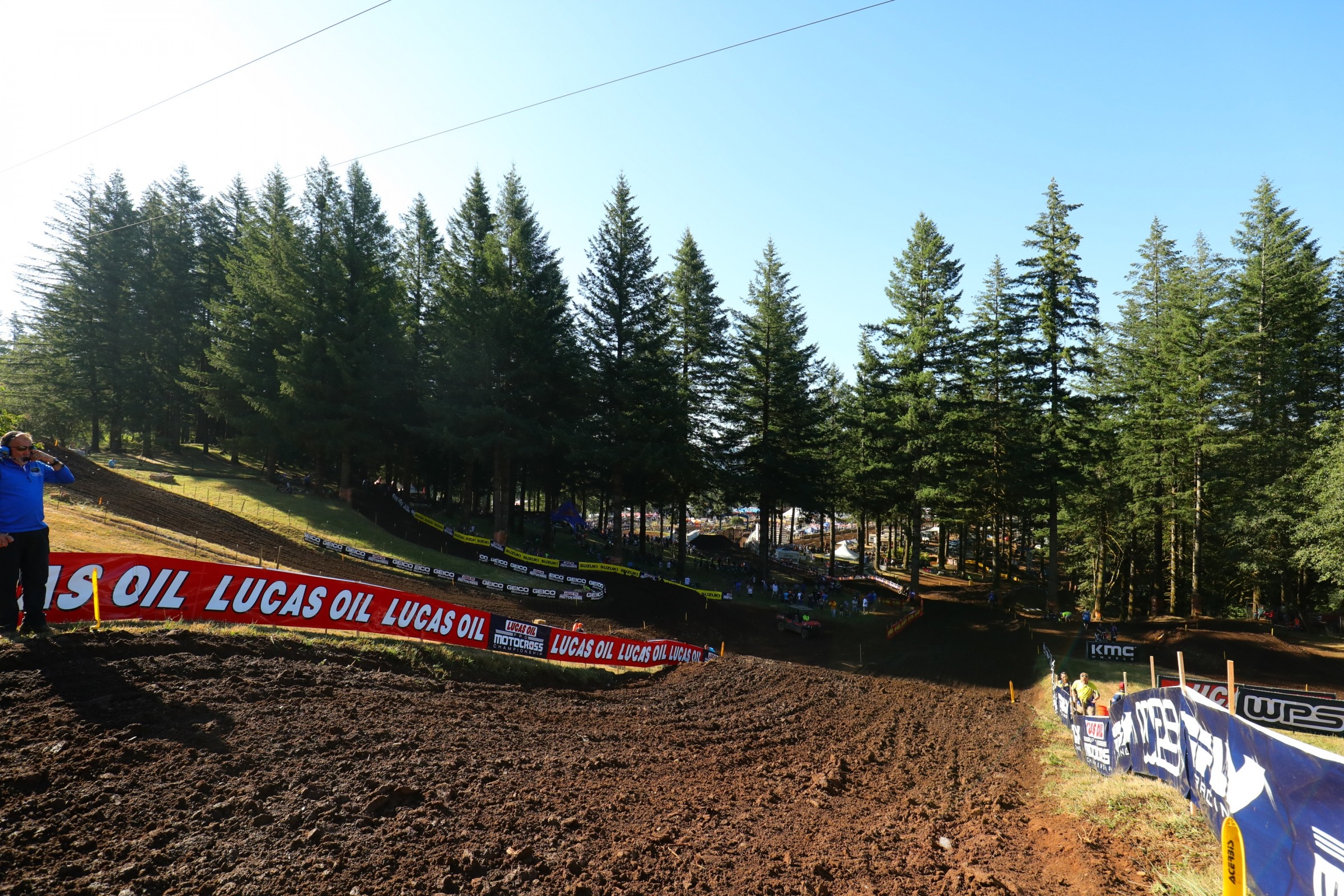 Welcome to the Race Day Feed, coming to you from Washougal. Round nine of Lucas Oil Pro Motocross is set to play out today, and right here is where you can keep track of all the action. We’ll be posting updates right here on Racer X Online all day, so be sure to check back often. Posts are in chronological order, so scroll to the bottom for the latest info.

Welcome to round nine of the Lucas Oil Pro Motocross Championship, coming to you from the Pacific Northwest. The Washougal National in Washougal, Washington, is the longest-running motorsports event in the Pacific Northwest, dating back to 1980. The 2018 edition will mark the 38th running of the event. Hometown hero Ryan Villopoto will serve as the grand marshal of the event today and will also compete in the 125 All-Star race, but the Washington native is not the winningest rider here. That honor belongs to longtime rival, Ryan Dungey, who won five of his six career starts here in the 450 Class.

For the third time in three races we have a different points leader in the 450 Class. After a disastrous day in Michigan, which saw him give up the points lead for the first time in 2018, Eli Tomac put in an all-time ride last weekend at Spring Creek to reclaim the points lead back from Marvin Musquin. Following his fourth 1-1 performance of the season, Tomac now holds a seven-point advantage over Musquin with four rounds remaining.

Today could prove pivotal in the championship run. The slick Washougal base has always played into the style of Musquin. He won here in 2017, and in seven career appearances (450 and 250 Class) he’s finished on the podium five times. But Tomac has always been strong here as well. In his last five appearances here (450 and 250 Class) he’s finished either first or second.

Ken Roczen could play spoiler today. In the last four motos, Roczen has a moto win and three additional moto podium finishes, which is best in the class over that span. Justin Barcia is trying to rebound from an off weekend at Millville but has been strong all season. If Musquin is to retake the points lead, he’ll need some help from the field.

The 250 title chase is firmly in the hands of Aaron Plessinger. The winner of four consecutive motos, Plessinger has stretched his lead to 49 points over second place Alex Martin. His 1-1 performance at Spring Creek last weekend was his fourth of the year and he’s clicking on all cylinders at the moment. With just four rounds remaining, Martin needs a big day today.

In injury news, Monster Energy/Pro Circuit Kawasaki rookie Garrett Marchbanks underwent surgery on his ankle this week and is expected to miss the remainder of Pro Motocross. This leaves Pro Circuit with just Austin Forkner and Joey Savatgy for the rest of the season. The good news for Kawasaki: Josh Grant will make his long-awaited return from a leg injury sustained at Arlington Supercross. Today will mark Grant’s first Lucas Oil Pro Motocross race since Southwick last year.

The first qualifying sessions of the day have concluded at the Washougal National. No surprises up front in the 450 Class, as Eli Tomac was fastest with a 2:12.492.

Justin Hill, who grew up in nearby Oregon and raced Washougal as an amateur, finished second in the session. He was more than a second off the pace of Tomac. Marvin Musquin took third ahead of Ken Roczen and Justin Barcia. Blake Baggett, Cooper Webb, and Weston Peick.

In his first Pro Motocross race of 2018, Josh Grant finished ninth ahead of Lorenzo Locurico.

Still searching for his first moto win of the season, Joey Savatgy is off to a good start here in the Pacific Northwest. The Monster Energy/Pro Circuit Kawasaki rider was quickest in the first 250 qualifying session with a 2:13.304. Points leader Aaron Plessinger was second with a 2:14.294. Savatgy’s teammate Austin Forkner was third, followed by Colt Nichols and Chase Sexton.

Tomac dropped his first time by just over two seconds to grabbed fastest qualifier on the day. His 2:10.290 was nearly a full second faster than Hill in second, who set a 2:11.045. Musquin was third fastest but more than a full second off the pace of Tomac.

Justin Cooper has never competed at Washougal prior to today, but it didn’t stop the rookie from setting the fastest qualifying time. Cooper dropped a 2:11.328 in the second session to take the top spot.

Joey Savatgy set the fastest time in the first session, but was a tick off in session two. He qualified second with a 2:11.452. Austin Forkner was third fastest.

Everything that could have gone wrong for Monster Energy/Pro Circuit Kawasaki this year has. It’s been a trying year for the most decorated 250 team in history. In the first moto at Washougal today, something finally went right.

Down to two riders due to Garrett Marchbanks’ recent ankle surgery, Pro Circuit teammates Joey Savatgy and Austin Forkner were 1-2 out of the gate in the first 250 moto. Jordon Smith, Michael Mosiman, Dylan Ferrandis, Mitchell Harrison, and Aaron Plessinger were in the mix early. Ferrandis made an early run but lost the front end and went down. He would finish 11th.

Up front, a four rider slugfest broke out. The top four were within a couple seconds for much of first half of the moto. Savatgy held the early lead but was under heavy pressure from his teammate. His lead never broke two seconds and Forkner finally made a pass for the lead on lap five. After fending off a hard charge from Smith, Savatgy went back to work on his teammate. Forkner couldn’t shake Savatgy and was under intense pressure late in the moto.

On lap 11, Savatgy began to make his run and forced his way back into the lead on lap 12. He found a little breathing room late in the moto and went on to his first moto win of the season by 1.9 seconds. Smith broke away from Plessinger late and tried to make a run at Forkner, but Forkner held on to take second.

Entering Washougal, there was a lot of talk about how bad Marvin Musquin needed to make up points at a track he has a great history at. But let’s not forget, in his last five appearances here (250 and 450), Eli Tomac has finished no worse than second. Something had to give in the first moto.

Justin Bogle and starts just go together. Since returning from injury, Bogle has claimed a number of holeshots and grabbed another one today in the first 450 moto. Justin Hill, from nearby Oregon, was second behind his teammate, with the returning Josh Grant in third. Eli Tomac and Marvin Musquin were fourth and fifth early.

There was a lot of shuffling early in the race. On lap 3, Musquin passed Hill as well and then passed Bogle for second. Ken Roczen eventually joined the fray and worked his way into third on lap 5. Bogle got shuffled back to around fifth and then dropped back to 12th on the same lap. We didn’t see it, but we assume he went down.

Once he had a clear track, Tomac took off. By lap 11 he’d already stretch his lead to 8.5 seconds over Musquin. He went on to win the moto by 11.6 seconds. Musquin took second over Roczen and Hill.

Justin Barcia tucked the front on the opening lap and went down, but he rebounded to come back to fifth. Teammates Blake Baggett and Benny Bloss took sixth and seventh ahead of Cooper Webb, Phil Nicoletti, and Grant.

The black cloud that’s hung over the Pro Circuit tent for much of the 2018 Lucas Oil Pro Motocross Championship returned in the second 250 moto at Washougal.

Points leader Aaron Plessinger grabbed the holeshot in the second moto but was quickly overtaken by Shane McElrath on the opening lap. Austin Forkner sat in third, while his teammate, and first moto winner, Joey Savatgy was buried in 25th after the opening lap.

Early in the race, Forkner was scrubbing horsepower hill when his front tire clipped the top of the jump and he went down hard. He was on the ground for a while before he was able to stand on his feet and exit the track. He did not finish the moto. At this time, we don’t have an update on his condition. We will continue to monitor the situation and post something when we have details.

Up front, McElrath was extending his lead to more than four seconds over Plessinger. He kept that distance for most of the moto before Plessinger went down late. McElrath cruised to the moto win—the first of his career—from there over Dylan Ferrandis. Plessinger rebounded to take third and the overall. McElrath actually won an overall—at Muddy Creek earlier this year—before taking his first career moto win.

Savatgy stormed back through the pack and nearly won the overall but was only able to work up to ninth. He finished third overall on the day.

Wow! Just wow! Eli Tomac may not be human. For the second week in a row, Tomac put in an all-time come-from-behind performance to capture the overall.

Let’s start from the beginning. Justin Bogle—shocker—grabbed his second holeshot of the day and sixth on the year. Ken Roczen vaulted to the early lead over Bogle, Justin Hill, Marvin Musquin and Blake Baggett. Tomac was buried in ninth off the start.

Hill moved into second on the opening lap but wasn’t able to fend off a hard charging Musquin, who took the position on lap 2. On lap 5, Tomac moved into third when Hill crashed, but he went down in the corner and lost a position to Justin Barcia. Hill was unable to finish the moto.

Then Tomac went on the hunt. He blasted past Barcia to take over third. On lap 7, he was well off the pace of the leaders, but then he began to put in his sub-human lap times. Tomac was going three seconds a lap faster than Roczen and Musquin and was taking large chunks out of his deficit.

By lap 11, he already had Musquin in his sights. Musquin held strong for a bit, but nothing was slowing Tomac down today. He hunted down Roczen, too, and made the pass for the lead over the finish line with two laps to go. He cruised from there to take a 2.2 second win and the overall on the day behind a 1-1 performance.