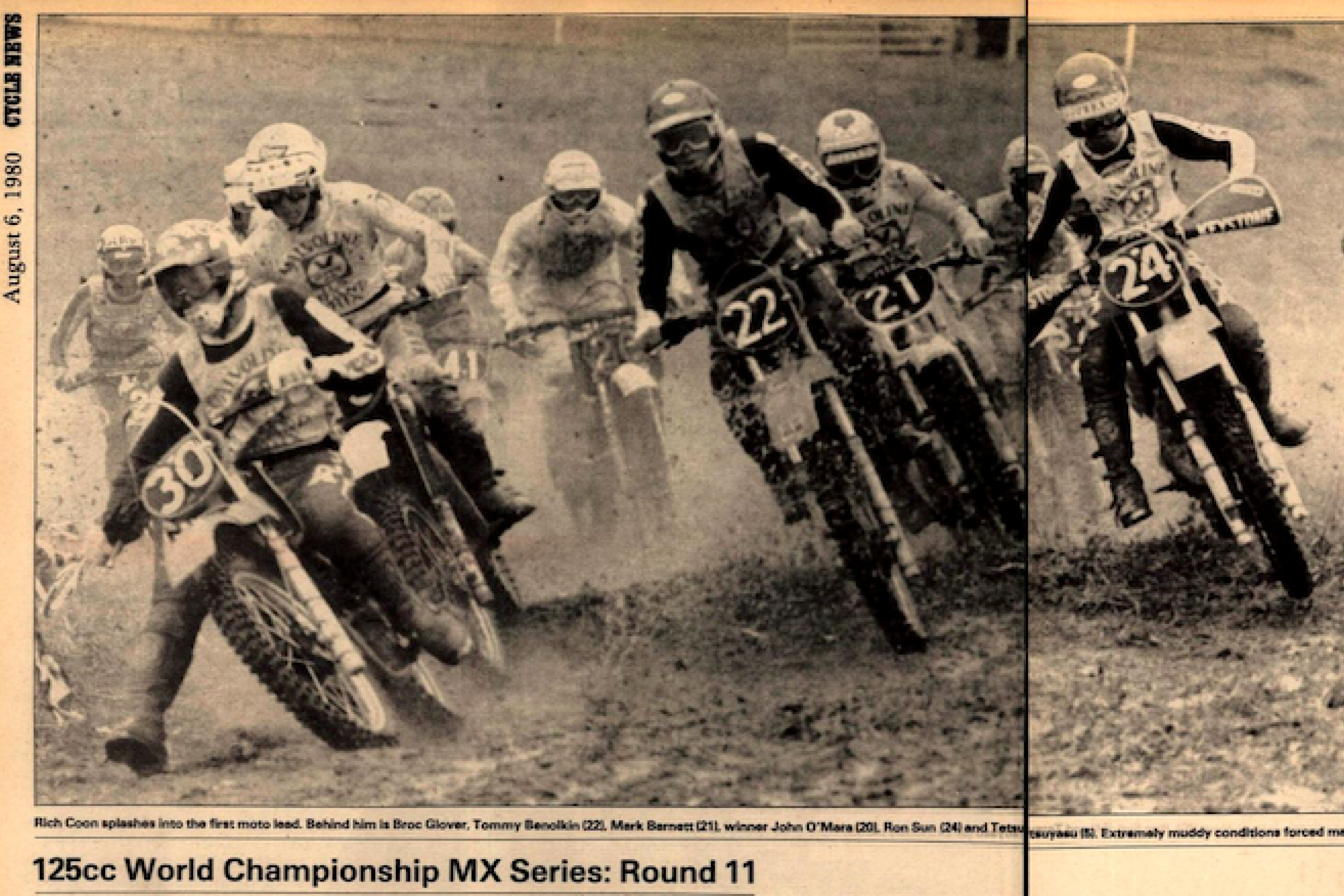 On This Day in Moto July 27

Mugen Honda rider Johnny O'Mara scored one of the biggest upsets in motocross history when he rode his white works bike to a muddy win at the Valvoline 125cc U.S. Grand Prix of Motocross. The 18-year-old O'Mara went 1-3 in a race that was so bad, only one other rider (Italian Gilera rider Dario Nani) scored points in both motos. Suzuki's Mark Barnett was second in one moto; Honda's Rich Coon second in the other. O'Mara was riding a one-off Mugen with support from Al Baker, his longtime sponsor.

Footage of the day from Scott Wallenberg's father, Wally:

Spring Creek in Millville, Minnesota, hosted the ninth round of the 2013 Lucas Oil Pro Motocross Championship and it featured an epic showdown between Suzuki’s James Stewart and Honda’s Trey Canard in the first moto. The two dueled the entire moto, with Stewart edging Canard by two-tenths of a second to grab the moto win. Hometown hero Ryan Dungey would win the second moto, but Stewart took the overall—his last win to date in Lucas Oil Pro Motocross—over Canard and Dungey.

GEICO Honda’s Eli Tomac went 1-1—just like he did in the 450 Class last weekend—to claim the overall over Marvin Musquin and Jason Anderson.

James Stewart, still with Kawasaki, went 1-1 to claim the overall over Honda’s Andrew Short and Michael Bryne at the Washougal National.

In MX Lites, Ryan Dungey picked up his first win at Washougal with a 2-1 performance over hometown favorite Ryan Villopoto, who went 1-2. Dungey would go on to win six more times at Washougal and is the winningest rider in history at the Pacific Northwest venue. Josh Grant, who is returning to racing this weekend after suffering a leg injury at Arlington Supercross, finished third overall.

Broome-Tioga Sports Center in Binghamton, New York, hosted three different classes of the 1985 AMA Motocross Championship. In the 500 Class, it was Broc Glover with a perfect 1-1 performance who claimed the overall over Kawasaki’s Alan King and Yamaha’s Eric Eaton.

RedBud hosted a round of the 1982 500/125 AMA Motocross Championships. Danny Chandler captured the 500 Class win with a 1-1 performance. Mike Bell and Darrell Shultz rounded out the podium.

The 125 Class win went to Johnny O’Mara. Mark Barnett and Jim Gibson rounded out the podium.