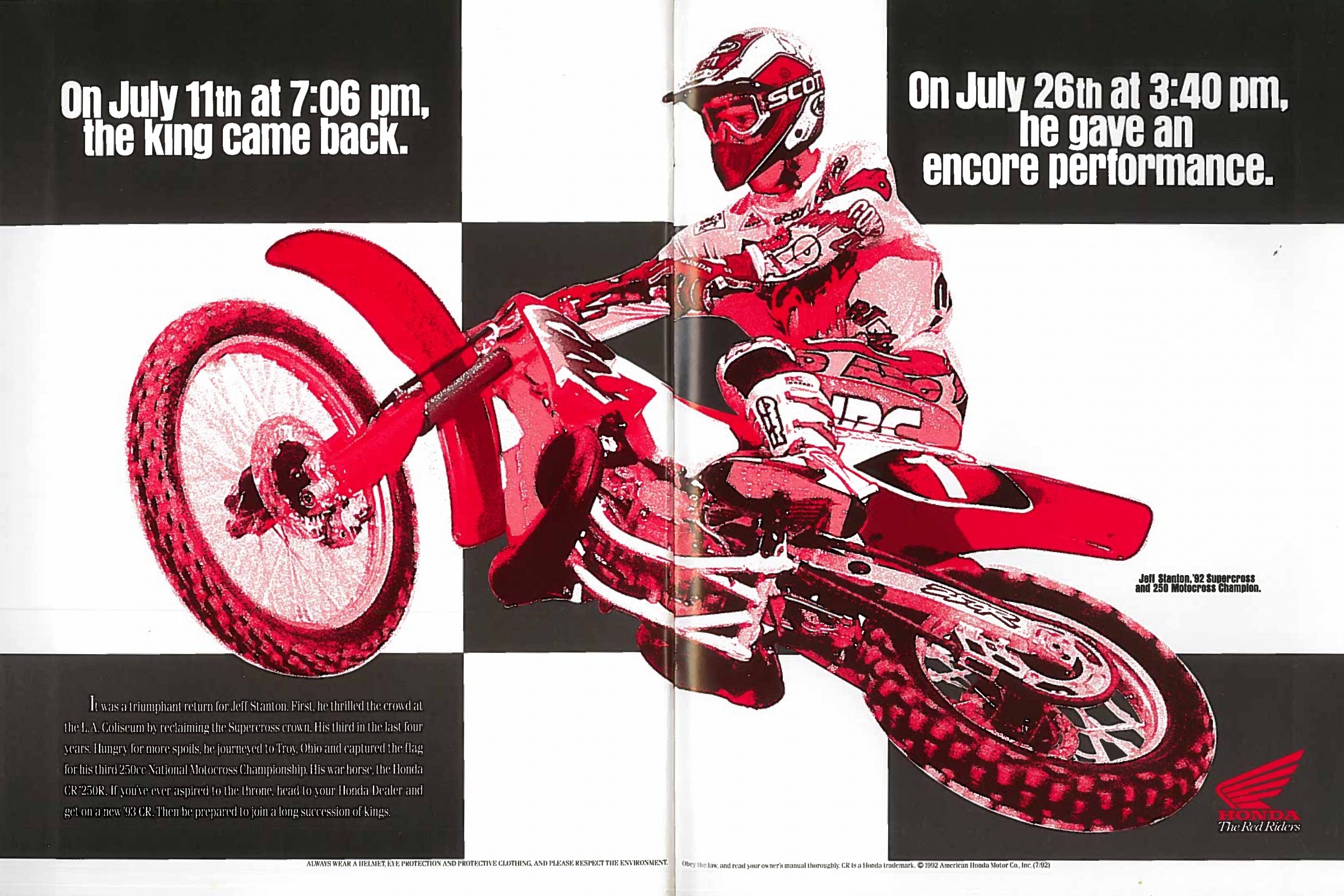 On This Day in Moto July 26

In the span of three weeks Team Honda's Jeff Stanton had arguably the best run in the history of the sport. First, on July 11, he clinched the 1992 AMA Supercross Championship with a win at the Los Angeles Coliseum, which allowed him to overtake the struggling Damon Bradshaw of Team Yamaha. Next, on July 19, he swept all three motos of the 250cc U.S. Grand Prix at Unadilla, giving him three straight USGP wins. And then on July 26, Stanton clinched the '92 AMA 250cc National Championship with a runner-up finish at the Kenworthy's National in Ohio.

The only person to get in Stanton's way for a clean sweep was Jean-Michel Bayle, his troublesome teammate who was riding with obvious disinterest for much of 1992, his last year in motocross. Bayle decided to go all-in for what turned out to be his last-ever AMA 250 National win, posting 1-1 scores to continue to be something of a thorn in Stanton's side. It was the last race of any kind that the gifted Bayle would win on the AMA circuit.

This ad was in the July 26, 1976 issue of Cycle News. It features some of the world’s best riders as part of the Gold Belt team. Gold Belts were kidney belts that helped keep your lower back, waist and kidneys from taking too much of a pounding under your leathers (Yoko's nylon pants were just starting to become a thing). No one wears a Gold Belt anymore, just as they don't wear Jofas mouth guards or Scott Venturi facemasks under open-faced helmets! But back in the day, they were state-of-the-art race gear. Just ask Tony D., Roger DeCoster, Gary Semics, Marty Smith, the Jammer...

At the 125cc Grand Prix of Finland the Dutch Yamaha rider John Van den Berk took the overall win and also took control of the championship when his rival, defending 125cc World Champion Davey Strijbos, also from the Netherlands, failed to score any points. Van den Berk went 2-1 on his Cabellero Cigarettes-backed YZ125. The first moto was won by young French rider Jean-Michel Bayle on a Honda CR125.

In the midst of a comeback of sorts after a slow start to his AMA 250cc Pro Motocross title defense, the embattled Kawasaki rider Jeff Emig laid down 1-1 moto scores at Kenworthy's in Ohio for his third straight win of the series. Emig, who also had trouble in defending his AMA Supercross #1 plate, had found his old flow and was starting to close the gap on series points leader Doug Henry, who went 5-2 for second on his big Yamaha thumper. Honda's Ezra Lusk was third overall.

And down in Brazil the 250cc World Motocross Championship was heating up after Stefan Everts went 2-DNF while his rival Sebastien Tortelli swept the motos at Belo Horizonte. The Kawasaki-mounted Everts and the Honda-mounted Tortelli would take this championship down to the final moto in Greece.