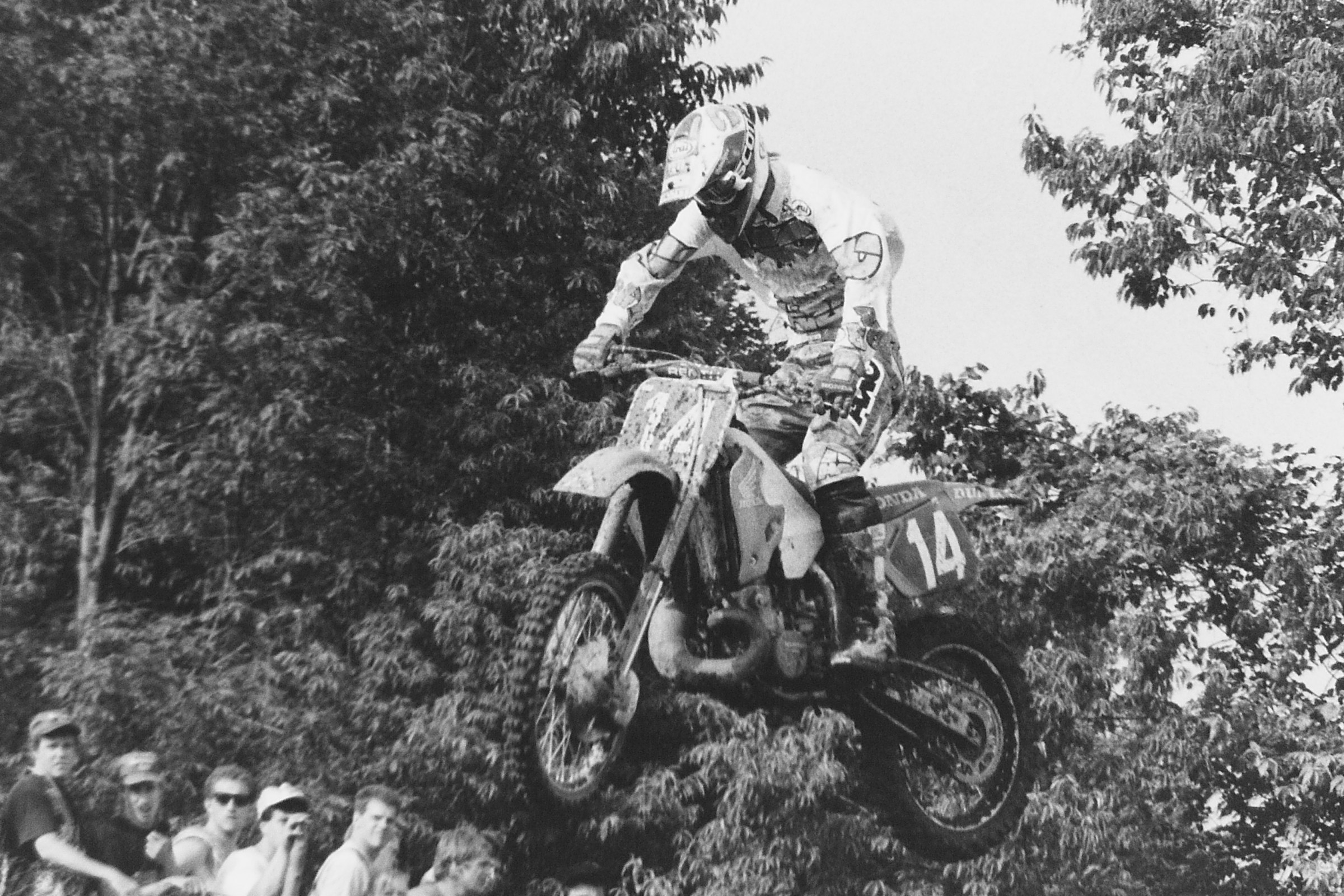 On This Day in Moto July 19

Freddie Ephrem, the longtime AMA official from Florida, passed away after suffering a fatal heart attack on July 19, 1989. Ephrem was a former maintenance director of the Jacksonville Motorcycle Police Force and a lifelong motorcycle enthusiast who was a regular fixture at the starting lines and finishing lines of tracks all over the southeast. He was also his own halftime entertainment in the early days of Bill West's Florida Winter-AMA Series, stunt-riding and crashing through burning walls and jumping through flames on his Harley-Davidson. After he passed, the AMA bought the back cover of Cycle News for a memorial shot of Freddie Ephrem.

Jimmy Ellis won the Superbowl of Motocross aboard a Can-Am, giving him a perfect four-for-four in what's now considered the AMA Supercross Championship. Ellis topped Yamaha rider Jimmy Weinert and Czech CZ rider Zdenek Velky. The race was filmed by sponsor Olympia Beer and included spectacular footage of Honda rider Marty Smith's crash off the start in the first race, when he forgot to make the bannered-off first turn and instead motored right into a set of whoops. Check it out at the 1:30 mark of this short film, narrated by Dave Despain, then with the AMA, and pit reporter Joe Parkhurst, the founder of Cycle World magazine.

Suzuki's Mark Barnett, the reigning AMA 125 Pro Motocross and AMA Supercross Champion, dominated the last Valvoline 125cc U.S. Grand Prix at Mid-Ohio on his works Suzuki. It happened one week after Barnett clinched that SX title at the Los Angeles Superbowl of Motocross. Defending 125cc Motocross World Champion Harry Everts ended up an unlikely second overall via 5-5 moto scores on a muddy day where only only the Bomber was on point in both motos. Honda's Johnny O'Mara, the previous year's USGP winner, finished third with 10-2 scores.

American Honda superstar Rick Johnson topped HRC Honda Europe's Eric Geboers at the 250cc U.S. Grand Prix at Hollister, California. The race was held at Hollister rather than its traditional home across the country at Unadilla because the New York track was hosting the '87 FIM Motocross of Nations, and back then, the host track could not have a Grand Prix in the same year. RJ went 1-1 for the win while Geboers would finish 5-2 for second overall. Geboers would go on to win the FIM 250cc Motocross World Championship, then set his sights on adding a 500cc crown the following year in his bid to became the first rider to win all three titles at the time: 125cc, 250cc, 500cc. Finishing third overall on the day was Johnny O'Mara on a Suzuki.

And happy birthday to Damon Bradshaw, the Beast from the East! One of our favorite moments of nineties' motocross was Bradshaw's victory lap after he won the High Point National while riding for Manchester Honda. Damon survived a swamped race track after a deluge turned High Point into a mud bog, but he was so thrilled with the win—which would turn out to be the last of his career—that he decided to go another lap and celebrate with the fans. He even stopped at one point and took off his jersey and gave it one of them, then continued to soak it all in...

And here's one of his better supercross wins, after a great duel with Jeff Matiasevich:

Andre Malherbe won the 500cc Grand Prix of Holland at Lichtenvoorde with 2-2 moto scores. The moto winners—Honda's Graham Noyce and Suzuki's Jean-Jacques Bruno—had problems in the other moto, opening the door to Malherbe for the win.

At what turned out to be the last 250cc U.S. Grand Prix at Unadilla, Team Honda's Jeff Stanton swept all three motos for his third straight USGP win. Behind him there was real drama, as series points leader Donny Schmit of the Chesterfield Yamaha team was knocked out in practice after a big crash left him with what they thought may be a fractured neck. He was taken by ambulance to a local hospital. X-rays proved negative, so he quickly checked out and then raced back to the track. Schmit missed the first moto, but managed to finish eleventh in the second moto, and then second in the finale, salvaging 22 points on a day that seemed lost. Two weeks later, he won the Swedish GP and clinched the 1992 FIM 250cc World Championship.

Check out a photo of Schmit before his ride to the hospital:

At the Spring Creek National in Millville, Minnesota, local product Ryan Dungey was beaten by Eli Tomac, then on a GEICO Honda 450. Eli went 1-1 on the day to the 3-2 for Red Bull KTM's Dungey and the 2-4 of his teammate Ken Roczen. The win was Tomac's first on a 450.

But Minnesota fans got a popular win when Jeremy Martin got a hometown victory on his Star Racing Yamaha YZ250F. Martin went 1-2 to better the 2-4 of Red Bull KTM's Marvin Musquin and the 9-1 of Cooper Webb.