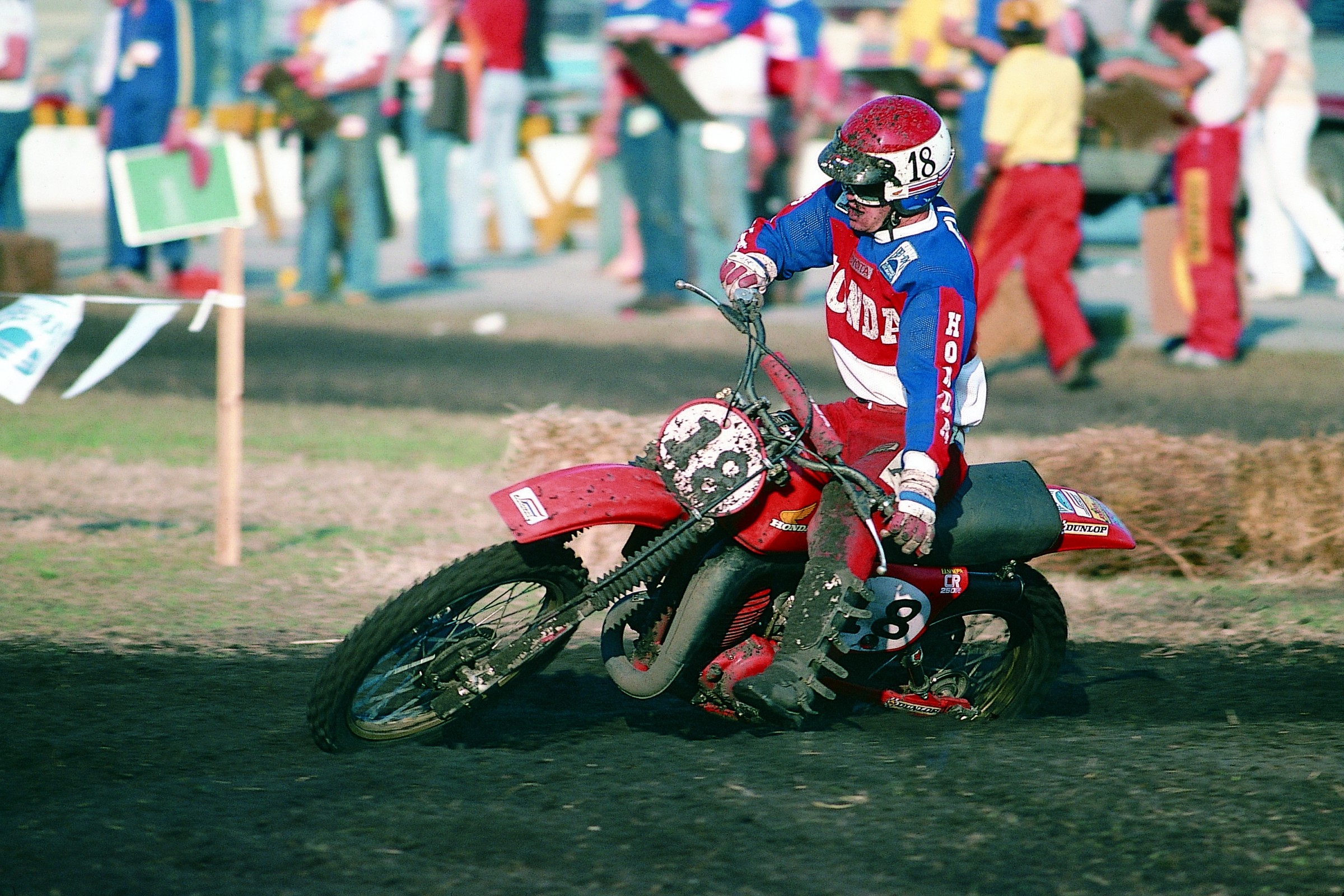 Where Are Jimmy Ellis

Jimmy Ellis is the second supercross champion—a distinction he earned in 1975 while riding a Canadian-built Can-Am motorcycle. The series was just being solidified by the AMA, but the events were already attracting large crowds. The final event of the 1975 season was televised, something that was rare in that era.

Ellis grew up and honed his race craft in New England before hitting the national circuit in 1973. He scored a total of 14 professional wins and had over 25 podium career finishes.  We had the chance to catch up with him recently.

Racer X: You attended the Southwick National—it is sort of a hometown race for you, right? But I understand you’re living in Australia now?
Jimmy Ellis: Yes, I’ve been living there for about 35 years. It’s been a great lifestyle change. Basically, a promoter called me up one day in 1983 and asked if I’d come over. I said, “Send me a ticket.” That’s when they had paper tickets. Three weeks later I got a ticket in the mail and I went, “Okay. Where’s that?” It’s a hell of a long way from New England! So that was my first impression. But I got on that plane and off I went.

So you went there and just stayed?
I did a supercross there and then I basically flew back home a couple weeks later. A week later, another promoter called up. I was flown into the West Coast the first time. Then in the middle of the country, which is a place called Adelaide. I went back and did another supercross. But then, because the Aussie fans seemed to like me, in Melbourne another promoter reached out. And then Sydney another promoter, and Brisbane, same thing. I just said, “I don’t even know what day it is anymore.” So I just ended up staying and then sorted out the visa and worked from there. I had basically a five-year contract to ride for Yamaha and KTM at the time because the guy who imported those bikes owned a big bike shop and asked me if I’d stay. So I brought the family over and we stayed there, and I kind of kept staying there even after I was done racing.

After your career in America was done, how much longer did you race for?
Until about 1987 or ’88 as a professional. Then it was just kind of a lot of fun stuff after that. I really haven’t stopped racing, though. I do a lot of vintage and work for the WA vintage motocross club. The Pre ’85 Club is what it’s called. It’s excellent. It’s a lot of fun. A lot of good guys. Like here, there’s a lot of good guys doing motorsports, and it is just fun to be part of it.

When you retired from racing, did you get a real job, or did you just stay employed in the industry?
I struggled to find a real job in the beginning because it was really hard to go from making really good money per week and then doing work by the hour. The promoters down there gave me a house and a car, vehicles and transport and flights and everything I needed. Everything was basically paid for. It was basically a factory sponsor, just like here. Of course, it’s a lot different from here as far as a little bit further behind than what America is.

I basically decided that after so-called finishing racing where it was just getting a little bit harder. I had a pretty bad knee at the time. I’ve had five knee reconstructions, so it took its toll on my body. I eventually ended up creating my own business and had my own business for 12 years. It was a big woodworking factory and a steel factory, basically. I made a lot of things for a store that is like Home Depot here in the U.S., but which is called Bunnings over there. It made a lot of manufacturing things. Started building machinery. Then I got involved in racecars. I kind of sold the business and got involved in racecars. I also started racing go-karts, then I started racing normal sedan cars. Then I thought, this is crazy. They’re not fast enough. So I created my own NASCAR team.

NASCAR in Australia?
Yes, in Australia. There’s only one racetrack there, so we only did that for about two years, maybe three years. I had good sponsorship and I had good people behind me and a good team of guys on the crew. It was full-time just NASCAR stuff. I did well and learned a lot. I learned a lot about setup and shocks. Changed a lot of things in the car. That’s where we went from there. After that, West Australia called up and wanted me to go over and do some racing. I thought, racing is better than working, so let’s go to West Australia.

I was living in Melbourne for nearly 20 years, and then I went to West Australia, which was 3,000 or 4,000 miles away, and did some more races. We kept winning, and enough got to be enough. Then I went to work for a big mining company doing scrap metal work. I spent another ten years doing that and serving as a welder and boiler maker, making things out of steel, fixing trucks, fixing excavators and bulldozers and bucket trucks. At Christmastime I thought I’d been there long enough and moved on, and I’m kind of semi-retired now. I am still having fun and still riding, but mostly riding in the woods and in the bush. I still have a lot of fun with the bikes!

What brings you back to the States?
Being over there, the relationship I had broke down about two years ago. I thought, being all alone over there and no family and my kids are so far away, mom’s getting a bit older and I thought I’d just come home and spend some quality time at home for a few months. I’ll go back to Australia about January, February next year. My mother is 88 and she’s doing very well, and still getting around.

Tell me about your kids. Are they in Australia or are they here in America?
I’ve got one son that’s in Australia. He’s 26 years old. He’s a pilot now. He just got his pilot’s license a couple months ago. He’s learning to be a commercial pilot eventually. Then I’ve got a son who is 30 and lives in New Hampshire. He’s more of a woodsman and hunter and lives off the land a little bit more. He spent some time racing, but he felt that he spent enough time getting hurt and he got out of it. Then I have a daughter, and she lives in Connecticut. It’s good to come home and see them. I only come home every two years, maybe three years and try to spend at least four weeks at home. But I end up spreading myself real thin between everybody, and then all of a sudden you got to go back home again.

Doesn’t Eddie Warren live over there, too?
He did. I think he still does, maybe in Sydney someplace. He had some pretty bad luck in his lifetime, as he lost his wife at a young age. I think he’s doing really well now, but he certainly had some bad turns in life there for a bit.

Thinking back on your career here in the States, you were America’s second supercross champion. What do you still recall of that time in your life?
What I still recall is when I was riding and doing the supercross in 1974 and ’75 and things, honestly to me it was just riding. I used to say to a lot of people, how come these guys can’t go fast enough? What seems to be the problem? I don’t want to say it was the bike. We were all riding about comparable bikes at the time and things, but now suspension and handling play a bigger role. I always felt that it was just easy for me. Being a young kid, I was only 16 or 17 years old, it was just like second-nature. It was part of what I did. So supercross seemed to be to me quite a lot of fun because now you’re doing short sprints. The amount of training that I have done and used to do is a lot different than what people I see do today. Today they have nutritionists and trainers and things. Again, I still don’t think they’re doing it 100 percent the right way to deal with motocross. That’s only my view. You can see them when they come off the track.

Motocross is a lot different than supercross. Supercross is a short sprint, very quick, hustle all the time, and wherever you finish is where you finish at that moment. Motocross, in 30-minute races you’ve got time to kind of—and we used to do 40-minute races. Honestly, it used to be just you had to train for the heat. We were racing in the country at the time, whether we were racing in Texas or Washougal, Washington or RedBud or even Southwick. I love Southwick. It used to be a great track. It used to get rough, but Unadilla was always pretty rough as well, and maybe the roughest. It was like, how rough can it get? No question about that. All tracks get rough. It was a matter of where you paced yourself and where you do it in a 30-minute race or you do it in a 40-minute race.

Some people are good at sprints. Some people are good at long distance. I used to love watching the halfway sign come out on a motocross versus a supercross. You watch the halfway sign come out and all of a sudden it’s like, let’s pick it up a couple seconds. All of a sudden they’re going, hang on, slow down. What are you doing? That was always me. It was always a lot of fun, and I enjoyed the wins along the way.

Jimmy, thanks for chatting with us, and enjoy your time here in the States!
Thank you, I always do. I want to thank Alex and Richard and all the boys there at [Legends & Heroes]. They’ve supported me right through the last 12 years or so and it’s been fantastic. I really appreciate all their help. They are a fantastic group of people.