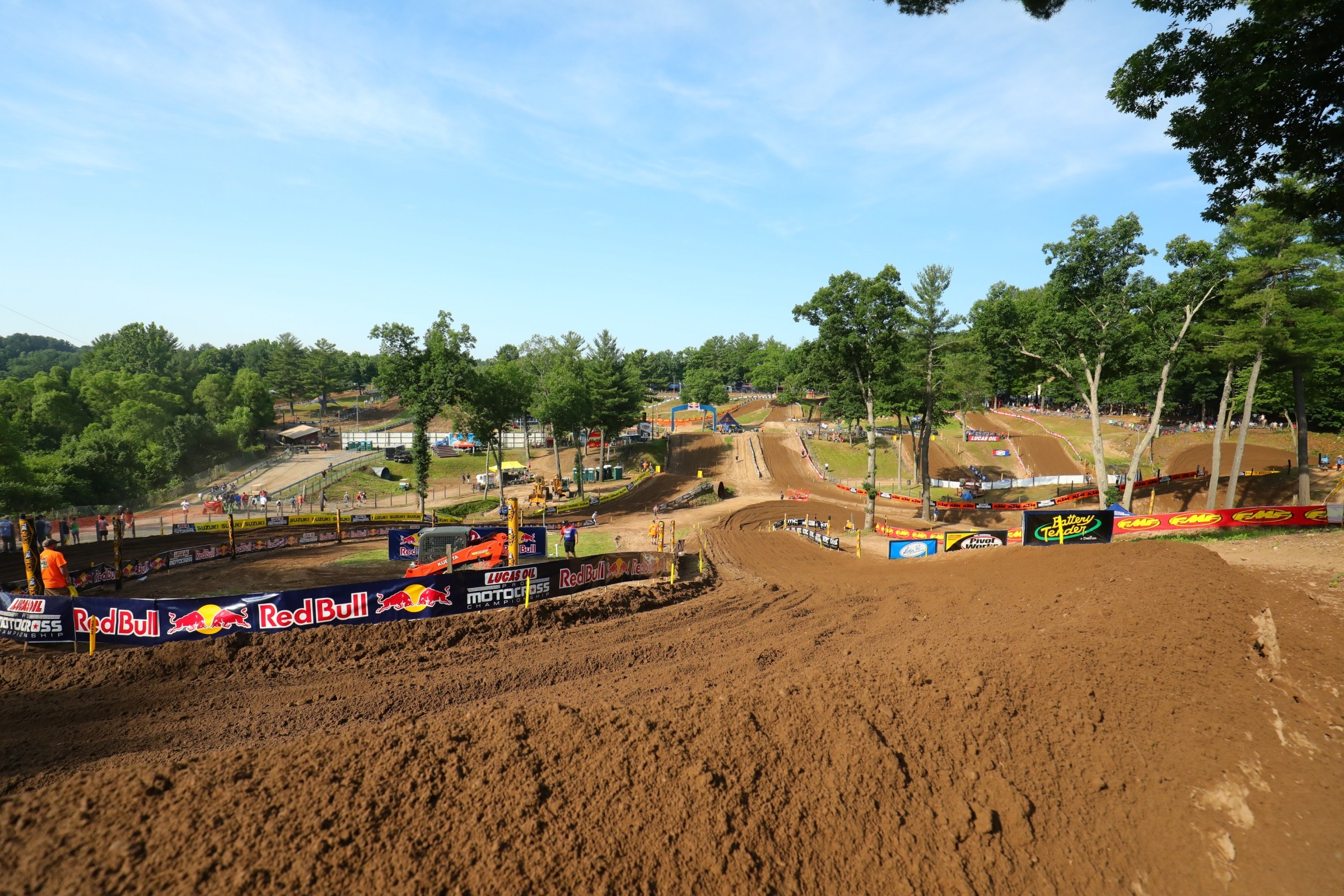 Welcome to the Race Day Feed, coming to you from Southwick. Round six of Lucas Oil Pro Motocross is set to play out today, and right here is where you can keep track of all the action. We’ll be posting updates right here on Racer X Online all day, so be sure to check back often. Posts are in chronological order, so scroll to the bottom for the latest info.

Welcome to Southwick, host of round six of Lucas Oil Pro Motocross, and the one true sand track on the schedule. The Wick 338, as it’s known now, boasts one of the best crowds on the circuit, as the New England faithful show up in droves to cheer on their local NESC riders. The hard base creates a slippery feel and hard, sharpe bumps, which presents a challenge for riders. Another challenge today will be the heat and humidity. It’s expected to reach 92 degrees as the motos kick off. We’ll find who did and didn’t do their work this off-season today.

We’ve reached the halfway point in the championship and Eli Tomac continues to roll. The defending champion has won five straight overalls to begin the season, the first time that’s happened since James Stewart went a perfect 24-0 in 2008. While his moto streak has been broken, Tomac has still reeled off eight of ten moto wins this year and has already built a 32-point lead over second place Marvin Musquin. If the field was hoping to get some help today, don’t expect it to come from Tomac. He’s been fantastic at Southwick. In four previous appearances, he has lost just once, finishing second in that race. In two 450 Class races at The ‘Wick, Tomac is a perfect 2-0.

If Tomac is still to lose his grip on the class, Marvin Musquin and Justin Barcia will be there to capitalize. Musquin has taken two moto wins in the last four and has had success in the sand box. Bam Bam, meanwhile, has regained his confidence and is looking more and more like the rider we saw a couple years ago. He nearly had the overall last weekend at Muddy Creek and has been a podium regular this season.

The 450 Class will get some much-needed depth this weekend. Monster Energy Factory Yamaha’s Cooper Webb (leg) and Autotrader/Yoshimura Suzuki’s Justin Bogle (arm) will both make their 2018 Lucas Oil Pro Motocross debuts today. Webb said he’s not quite 100 percent but wants to race himself back into shape. Bogle, meanwhile, has been riding since late-April, early-May and should be ready to near 100 percent.

The 250 Class has been wild through five rounds. Title contenders Zach Osborne (shoulder) and Jeremy Martin (back) have both been lost for the season and although he’s struggled with consistency, Aaron Plessinger has built a 29-point lead over Alex Martin.

Typically at Southwick, the first qualifying session of the day has a huge advance and the local NESC riders use it to jump to the top of the board. That wasn’t the case today, as the track crew disked up the track pretty good. We’ve heard it was to get rid of the hard base.

It didn’t seem to bother locals Robby Marshall and Chris Canning. They finished fourth (Marshall) and seventh (Canning) respectively in the first 450 session.

On top, though, was Marvin Musquin. Late in the first session, Musquin put in a 2:07.315 to take the top spot away from Justin Barcia. Musquin was just over two seconds faster than Bam Bam. Points leader Eli Tomac finished third, three seconds off the pace of Musquin.

In the 250 Class, Justin Cooper was on fire for the second week in a row. The rookie set a 2:08.659 and bested second place Joey Savatgy but nearly two full seconds.

RJ Hampshire was a race-time decision after a hard crash in the second 250 moto last week, but he appears to be okay, though, as he set the sixth fastest time. Last week’s second moto winner, Dylan Ferrandis, was seventh, followed by points leader Aaron Plessinger, Muddy Creek winner Shane McElrath, and Michael Mosiman. Tough session for Alex Martin, who enters Southwick third in points. He was just 17th fastest.

Qualifying has concluded at Southwick and Marvin Musquin’s first time will stand. Eli Tomac made it close, though, improving nearly three full seconds. Tomac’s 2:07.385 was fastest in the second session, but a few tenths off Musquin’s 2:07.315.

Blake Baggett made a big jump in qualifying session two. He improved his time by more than a second and qualified third overall. His 2:09.294 is nearly two seconds off Musquin.

Justin Barcia was fourth with a 2:09.455, followed by local legend Robby Marshall, who no longer competes regularly in Pro Motocross and works full-time.

Monster Energy/Yamalube/Star Racing Yamaha went 1-2 in the second 250 qualifying session, with Dylan Ferrandis edging out teammate Justin Cooper. Ferrandis’ 2:08.927 in the second session came up just short of Cooper’s 2:08.659. Cooper will be your fastest 250 qualifier.

Austin Forkner improved upon his first session time and took third in the second session and third overall. Alex Martin made a huge leap the second time around. After setting just the 17th fastest time in session one, Martin set a 2:09.776 to grab fifth overall.

The 250 Class delivers again. The most exciting class this year in Lucas Oil Pro Motocross served up another barn burner in the first moto at Southwick. And what a tale of two motos it was.

Last week’s overall winner Shane McElrath rocketed out to the lead, and was followed by local hero Jimmy Decotis, in just his second race back. Decotis had the New England faithful on their feet the opening two laps. But he made a mistake on the second lap and things began to unravel from there. He finished the moto 20th.

Up front, McElrath was opening up a five second gap on Justin Cooper and Austin Forkner. On lap five, Forkner got around Cooper and had a clear track to hunt down McElrath. Cooper, meanwhile, crashed out of third and finished 17th.

Forkner wasted little time cutting into McElrath’s lead. Three laps after moving into second, he took over the lead and began to open it up. Then the wheels came off for McElrath, as he was quickly passed by teammate Alex Martin and Aaron Plessinger. He dropped all the way back to sixth.

Martin and Plessinger pushed each other to catch Forkner late and it was a three-way battle for the last few laps. Plessinger made a mistake with a two laps to and was out of the running for the moto win.

Martin was able to make a late push, but Forkner responded. He held on to take his first moto win since 2016 by 1.2 seconds. Plessinger rounded out the podium.

What. A. Race. Two heavyweights traded blows for nearly 30-plus two in the first 450 moto at Southwick. First, we’ll quickly recap the opening few laps.

In his first race back from injury, Justin Bogle grabbed the holeshot, but was passed by Ken Roczen. Justin Barcia, Blake Baggett, and Marvin Musquin filled in behind. Points leader Eli Tomac was stuck around eighth.

After stalking Roczen for the opening laps, Barcia finally took over the lead on lap four. The trouble wasn’t over for Roczen. He then lost second and third to Musquin and Tomac. He finished the moto fifith.

Things happened quickly for Barcia as well. Musquin took over the lead on lap six and Tomac quickly followed. Then it was on!

For the remainder of the moto, Tomac would make a charge, only to have Musquin shut the door. This game of cat and mouse continued back and forth until two laps to go when Tomac finally found his way around and took over the lead. As the white flag waved, Musquin was determined to make a last-ditch charge. He came up short, though, when he crashed. By this point, they had built a huge lead on Barcia for third, and Musquin was still able to finish second.

We’re just going to apply what we said about moto one to moto two. And the 250 Class delivers again. The most exciting class this year in Lucas Oil Pro Motocross served up another barn burner in the second moto at Southwick.

This one had a bit more drama, though. First moto winner Austin Forkner grabbed the early lead in this one. Shane McElrath, RJ Hampshire, Alex Martin, and Joey Savatgy were all in the mix.

Martin was making moves early. First he got Hampshire and then started applying heavy pressure to teammate McElrath. It took a few laps, but Martin finally moved into second on lap seven. At that point, Forkner had a four second lead. He stretched it to 5.6 by the next lap. Then, Martin went to work.

By lap 11, he had cut the lead to less than a second. Martin saw a small opening on the inside heading into a corner and tried to take it. It didn’t work. He smashed Forkner and both went down. Martin was able to get back up quickly and finished the moto fourth, but Forkner was down on the side of the track for a while and finished 20th.

“I feel so bad. I thought I had the inside and he didn’t let off. It definitely wasn’t on purpose,” Martin said to NBC Sports Network after the race.

[Update: Forkner told the broadcast he got the wind knocked out of him. He did finish the moto.]

With both Martin and Forkner down, the lead went to Dylan Ferrandis, who once again overcame a bad start to work his way into contention. It appeared it would be an easy moto win, but McElrath, who had a tough second part of the first moto, made him work for it and pushed all the way to the end. Ferrandis held on for the win by .8 to claim the moto win and his first overall in the U.S.

The second 450 moto belonged to Eli Tomac. Until it didn’t. Tomac was running away with the moto win and overall before a pair of mistakes ended his streak of overall wins at five.

It was Justin Bogle again grabbing the holeshot, but he was quickly passed by Marvin Musquin. Tomac actually had a bad start, but he made a few crafty moves early to grab third. He quickly passed Bogle and then went after Musquin. Unlike the first moto, he wasted little time to take the lead and made the pass on the first lap. Tomac with a huge lead at Southwick? It’s over, right? Well…

Tomac high-side going into a corner and nearly tossed away a huge lead. He got up in second, but had Musquin all over him. He then stretched the lead back out, only to crash for a second time in the moto. This time Musquin took full advantage and cruised to the moto win. Musquin also took the overall, his first of the year.