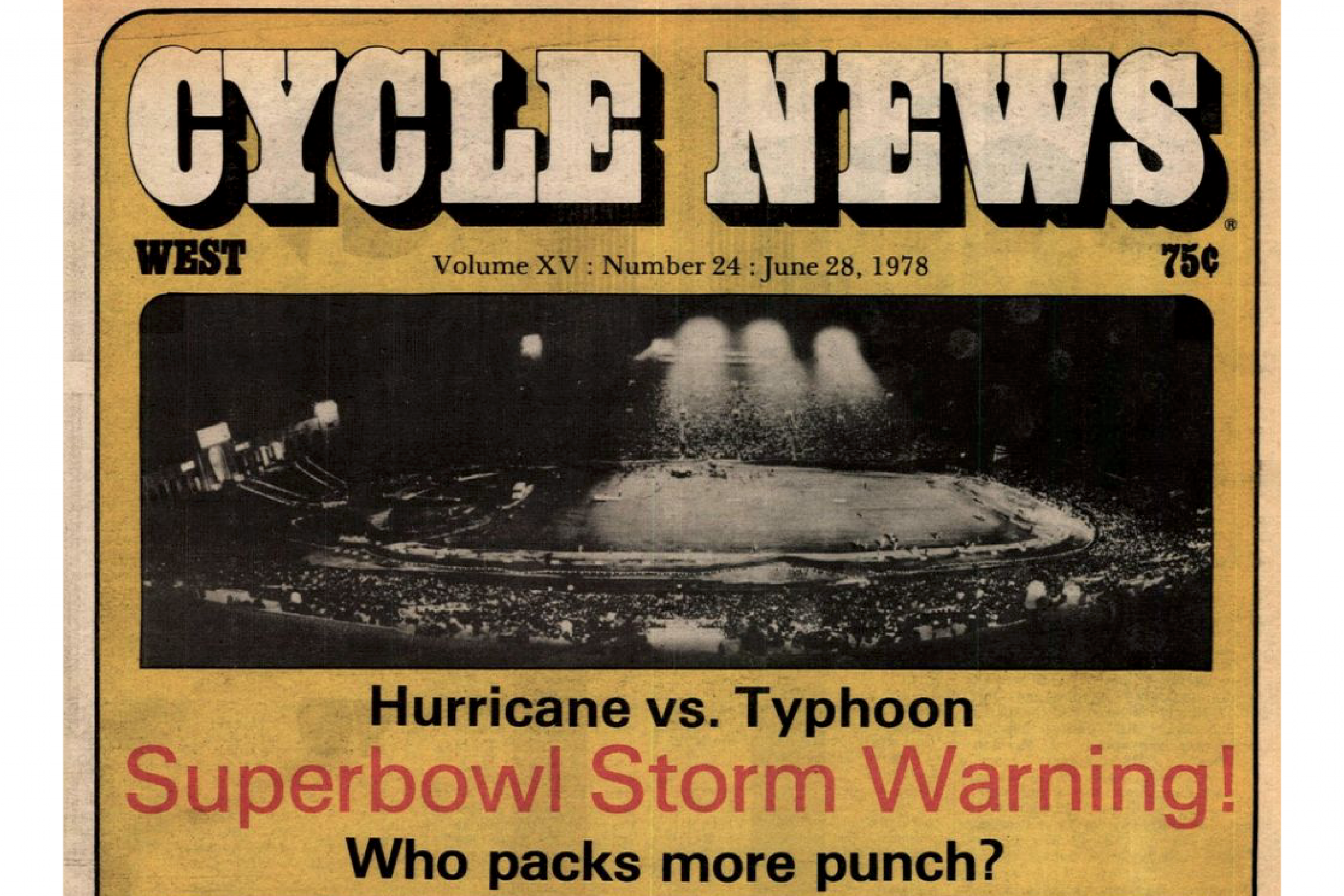 On This Day in Moto June 28

Broome-Tioga, near Binghamton, New York, hosted an AMA 125/500 National and the winners were both reigning class champions. Suzuki's Mark "Bomber" Barnett won on the tiddler while Honda's Chuck Sun won the Open class. Sun went 2-1 to take his win after Yamaha's Broc Glover won the first moto but finished outside the points the next time out. Yamaha's Mike Bell was second to Sun.

Barnett was followed by Kawasaki's Jeff Ward and Honda's Johnny O'Mara, the two men who would ultimately replace him as 125 Class champs after his three-year run on top ended in 1983.

The looming showdown at the 1979 Superbowl of Motocross between Marty "Typhoon" Tripes and Bob "Hurricane" Hannah was featured on the June 28 cover of Cycle News.

This is one we missed yesterday but wanted to make sure we mention: the 1987 Superbowl of Motocross at the Los Angeles Coliseum. Team Honda's Ricky Johnson went down off the start and remounted dead last, then passed the entire field, including sentimental favorite Guy Cooper and Honda privateer Fred Andrews. It would have been Cooper's only win in AMA Supercross, as well as Andrews' only podium, but they slipped back to second and fifth, respectively. No matter—RJ would still lose his AMA Supercross crown to Kawasaki's Jeff Ward, who ended up third on the night.

"I wish it had been an 18-lap race," Cooper said afterwards, "but it still feels great. I knew if I didn't make a mistake, I would be in the top three. I'm really proud of myself for second. Rick is a fabulous rider."

In the 125 Class, Kawasaki Team Green's Jeff Matiasevich won, but Suzuki's Willie Surratt wrapped up the 125 West title in finishing second, giving Suzuki a sweep of the 125 titles as Ronnie Tichenor had clinched the East already.

In France, the 125cc Grand Prix was won by Cagiva rider Davey Strijbos of the Netherlands. Strijbos went 3-1 to take the win over Honda's young Jean-Michel Bayle, who went 1-3. U.S. rider Bob Moore was second in the first moto while fellow American Mike Healey placed fourth.

In one the best rides of his entire career, American rider Billy Liles swept all three motos of the 1992 British 500cc Grand Prix at Hawkstone Park aboard a Johnson Honda CR500. Liles, who hailed from Georgia, had been racing in Europe since the early eighties. This particular win caught the eye of Team USA manager Roy Janson (Roger DeCoster was not the team manager between '92 and '94, as he was running a Grand Prix team in Europe). With many top Americans passing on the chance to race the Motocross of Nations in Australia that September, Liles would end up anchoring the team of Mike LaRocco and Jeff Emig, keeping Team USA's winning streak alive at 12 in a row.