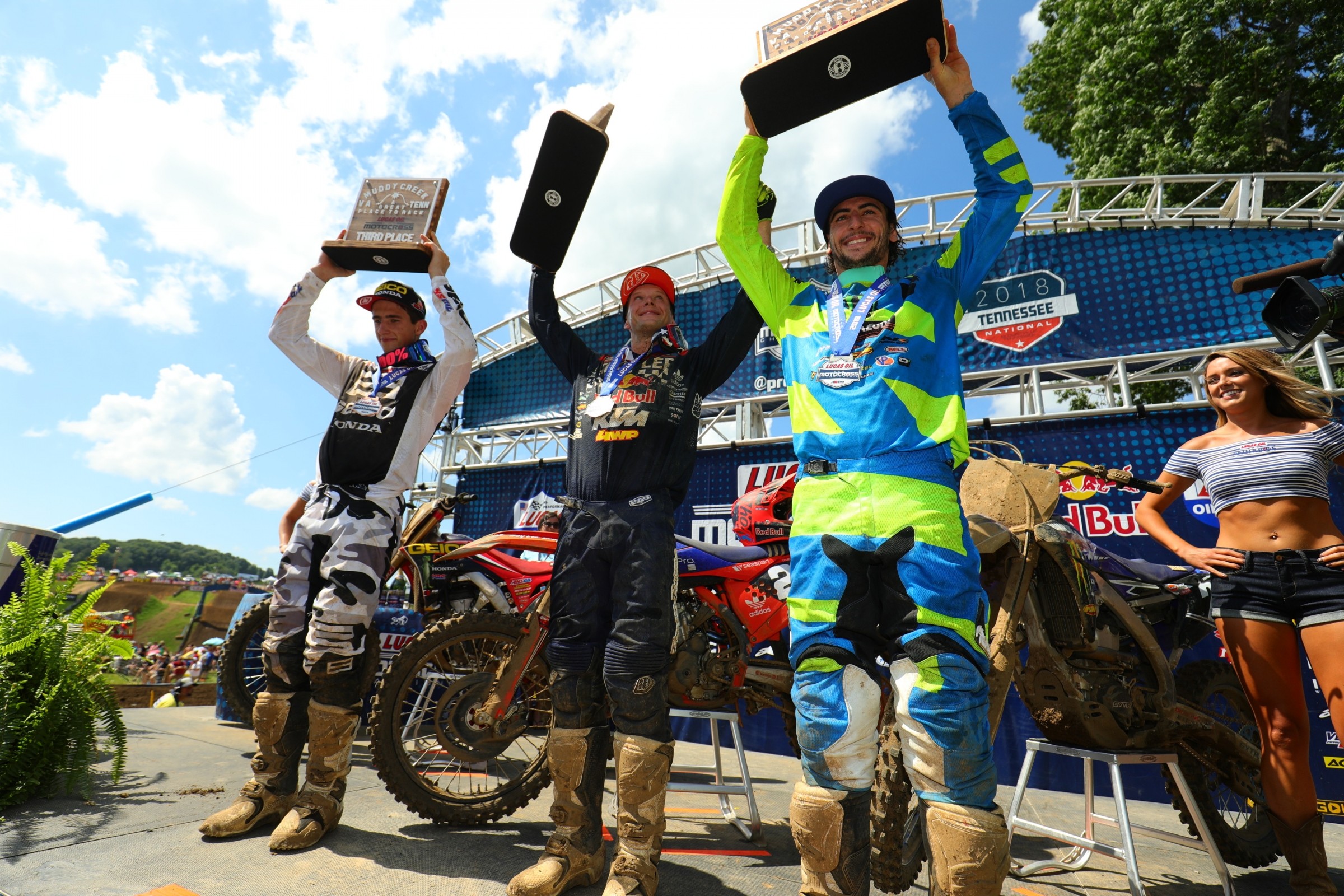 Welcome to the Race Day Feed, coming to you from Muddy Creek Raceway. Round five of Lucas Oil Pro Motocross is set to play out today, and right here is where you can keep track of all the action. We’ll be posting updates right here on Racer X Online all day, so be sure to check back often. Posts are in chronological order, so scroll to the bottom for the latest info.

Welcome to Muddy Creek Raceway in Blountville, Tennessee, host of round five of the Lucas Oil Pro Motocross. All week talk centered around the weather. Heavy thunderstorms were expected throughout Friday and today, but—fingers crossed—it looks like the weather will hold off. As of this morning, there is only a 40 percent chance of rain today. The track did get some showers this morning, but it’s expected to pass.

Perfect no longer (in moto wins, anyway) Monster Energy Kawasaki’s Eli Tomac rolls into round five with a four-race overall win streak, and seven moto wins in eight. His only blemish came in the first moto last weekend at High Point, where Red Bull KTM’s Marvin Musquin put in an incredible come-from-behind ride to capture his first moto win of 2018. The duel continued in the second moto—an instant classic—with Tomac holding off Musquin to claim the overall. Expect more of the same today. Musquin has a good history here—he won here in 2013 and finished second in 2015—and Tomac, well, he’s never finished outside the top three in his career at Muddy Creek, which includes his overall win last year.

Starts were the killer for Ken Roczen and Blake Baggett a week ago. Both were down in the first turn in the first moto, along with a number of other riders, and were never really in contention. Roczen rebounded in moto two and ran up front, but admitted he was off the pace of Musquin and Tomac. For Baggett, he went down early, and once again had to charge through the pack. By the way, he passed 47 (!) riders in both motos combined last week. Will either be able to challenge Tomac this weekend?

Justin Barcia has turned things around in 2018. After failing to make an overall, or even moto, podium last year, Bam Bam already has three moto podiums and two overall podiums through four rounds. According to Jason Weigandt, Barcia was rolling at press day yesterday, so keep an eye out on him today.

Through four rounds, Tomac already has a 28-point lead on Musquin, with Barcia in third, 57 points behind.

Heartbreak for GEICO Honda’s Jeremy Martin last week in the second 250 moto. On his way to the moto and overall win, Martin experienced a mechanical at the midway point in the moto and now finds himself 20 points back of Aaron Plessinger, who went 1-1 last weekend. Jason Weigandt talked with the team yesterday at press day. Here is his report:

The team explained today that the Sexton and Martin engine problems were totally different: Martin’s engine died and just wouldn’t restart, while, from what I can tell, Sexton’s engine problem was bigger. The team went to work trying to figure out the problems and solutions. Kibby, the squad’s technical director, told me today that the team has nine engines in rotation, and all nine will have to be changed based on what they learned post-High Point. The team got most of them changed this week, and Kibby was working on another here at the track this afternoon.

One thing that Martin’s mechanic, Derek Dwyer, mentioned to me is that since this is a new CRF250R this year, the bike has been in a continual state of evolution all year, almost weekly. The team does a lot of testing with each new idea and component before it decides to use it at the racetrack, but some things still slip through. Kibby says a lot of times, engine failures come down to the tiny tolerances used in race motors, with one small part being the tiniest bit off and throwing off the entire equation. Either way, the team thinks it has solutions for both the Sexton and Martin issues from this weekend forward.

An already deep 250 Class will get a few more riders back this weekend. Colt Nichols will make his return from a second broken humerus in less than a year. Jimmy Decotis is also back for the first time since breaking his L2 and L3 in a crash at Daytona. And finally, Hayden Mellross returns from a shoulder injury sustained at the season opener at Hangtown.

Remember this morning when we said to keep an eye on Justin Barcia? Well, he came out en fuego in the first qualifying session. Barcia was the only rider to dip below the 1:57s, and his 1:55.993 was nearly two seconds faster than second place Blake Baggett.

Justin Cooper continues to impress as a rookie. One week after grabbing the holeshot in both motos and finishing third overall, the Monster Energy/Yamalube/Star Racing Yamaha rider was fastest in the first 250 qualifying session. His 1:57.808 was nearly a full second faster than second place Austin Forkner.

After a rough week at High Point, GEICO Honda was back in form. Teammates Jeremy Martin and Chase Sexton sit third and fourth after session one. Shane McElrath, always good at Muddy Creek, is fifth.

After rain hit early in the morning, the track began to dry out and develop lines in the second qualifying session. Hence, the drop in times. Eli Tomac’s 1:51.405—fastest in 450 Class—was more than four seconds faster than Justin Barcia’s top time the first timed session.

Barcia bettered his time by more than two seconds, setting a 1:53.159, but it was only good enough for third fastest. Marvin Musquin slotted into second with a 1:52.034.

Blake Baggett and Justin Hill were both in the 1:53s as well, and finished fourth and fifth. Ken Roczen, Phil Nicoletti, Benny Bloss, Brandon Scharer, and Weston Peick rounded out the top ten.

Wow, Justin Cooper! The rookie dropped a heater late in the second 250 session to capture the fastest qualifier. His 1:52.503 was nearly two full seconds faster than Shane McElrath, who finished second.

Jeremy Martin and Joey Savatgy were also in the 1:54s. They finished third and fourth. Chase Sexton rounded out the top five.

Huge first 250 moto at Muddy Creek in regard to the title chase for Jeremy Martin. The two-time champion pounced on mistakes by Aaron Plessinger and Alex Martin and cruised to the first moto win in Tennessee.

Mistakes would ultimately cost Alex as well. He made a mistake on the huge uphill and went off the track. It allowed Jeremy to take the lead a few corners later. Alex stayed close, but another mistake in the back section cost him a spot inside the top ten. Cameras didn’t catch the crash well, but it was a strange one.

Jeremy would take control of the moto from there and cruised to a 5.9 second win over rookie Justin Cooper.

North Carolina native Shane McElrath is always good at Muddy Creek, and this year is no different. Shane took his first moto podium of the year with a third. RJ Hampshire and Austin Forkner rounded out the top five.

Tough moto for points leader, Aaron Plessinger. After his crash, he worked back to tenth, but couldn’t get around Chase Sexton the entire moto. He finished ninth.

Make it eight moto wins of nine for Monster Energy Kawasaki’s Eli Tomac. After an early battle with Ken Roczen in the first 450 moto at Muddy Creek, Tomac took off and cruised to a 7.9 second win.

Justin Barcia was the one on the move early. He put a slick pass on Weston Peick to take over third and put in an early run at leaders Tomac and Roczen.

After stalking Roczen for the early part of the moto, Tomac finally took over the lead on lap five. Barcia knew he couldn’t let Tomac get away and got around Roczen a lap later. Despite moving into second on lap six, Barcia wasn’t able to make a run at Tomac, who ran away with the moto win late in the race. Barcia finished third, with Roczen rounding out the podium. Blake Baggett finished fourth.

Musquin made his way all the way back to fifth. Peick, Phil Nicoletti, Justin Hill, Benny Bloss, and Henry Miller rounded out the top ten.

A wild and crazy second 250 moto at Muddy Creek—and an unlikely overall winner. First, here is what we know so far on Jeremy Martin, who went down hard early in the moto and was shown holding his back.

According to Racer X’s Steve Matthes, Martin is fully responsive and has full movement and is on the way to the hospital. We will post more once we know. The crash was not shown on the broadcast and we did not see it, so we’re not exactly sure what happened.

The racing was absolutely bananas. Alex Martin was the early leader in this one and was followed by his TLD teammate Sean Cantrell and Dylan Ferrandis. In just his second race back, Ferrandis was aggressive all moto. He attacked Martin hard, but Martin was stingy and wasn’t giving up the lead.

Ferrandis made another charge late in the moto, but once Martin held it off, it looked like the moto win was his as he held a decent lead with two laps remaining. Then disaster struck. Martin swapped going into the turn right after the finish line—the same one that got Aaron Plessinger and Marvin Musquin—and coughed up the lead. Martin did get up in second but was passed by teammate Shane McElrath with a lap to go. Ferrandis held on for the moto win in just his fourth moto of the season.

Remember how we said the moto was crazy and had an unlikely winner? Well, despite not winning a moto, McElrath took the overall, the first of his career. And it was at his hometown race! McElrath’s 3-2 moto scores were enough to claim the overall over Ferrandis (11-1) and Chase Sexton (8-4).

Eli Tomac’s overall win streak has reached five. But it wasn’t easy, and for much of the moto it looked like Justin Barcia would capture his first overall of the season.

Ken Roczen grabbed his second holeshot of the day and was followed closely by Barcia, Marvin Musquin, Benny Bloss, and Weston Peick. Meanwhile, Tomac got a horrid start and was buried in 19th.

Barcia wasted little time and passed Roczen for the lead on the opening lap and was followed quickly by Musquin. Musquin was aggressive early and took over the lead on lap four. Musquin slowly pushed his lead to three seconds and then five. Barcia did make a late run to cut it back down to three, but never challenged for the lead. The moto win is the second of the season for Marvin.

Tomac put in a tremendous charge. By lap 2 he was already into 11th and charging. He made it all the way to third late in the race and made a charge at Barcia. But once Barcia responded with quick lap times, Tomac backed it down a notch. Barcia rode strong at the end of the race to capture second behind Musquin.

Tomac took the overall, his fifth straight to begin the year, over Barcia and Musquin.