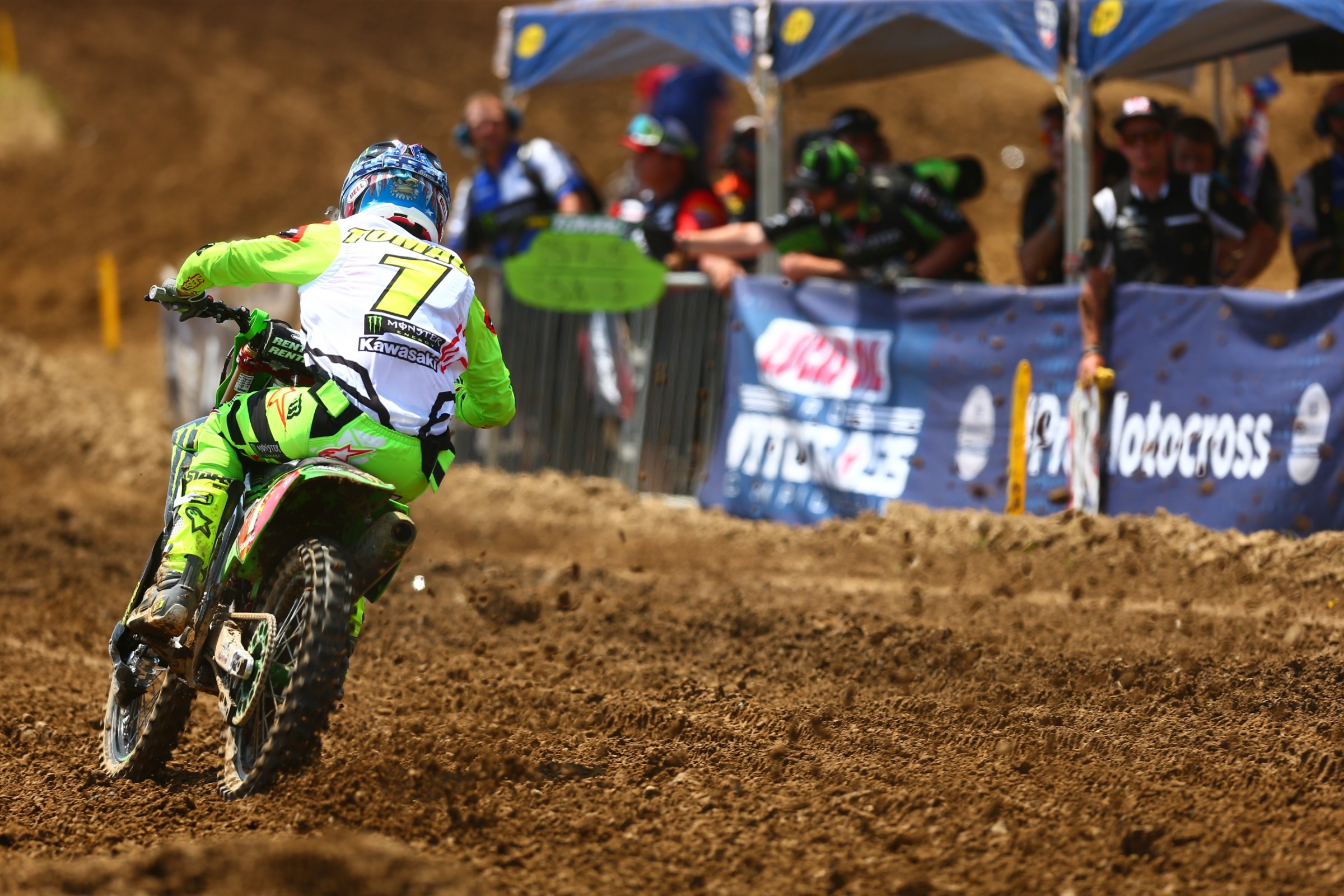 Welcome to the Race Day Feed, coming to you from High Point Raceway in Mount Morris, PA. Round four of Lucas Oil Pro Motocross is set to play out today, and right here is where you can keep track of all the action. We’ll be posting updates right here on Racer X Online all day, so be sure to check back often. Posts are in chronological order, so scroll to the bottom for the latest info.

Welcome to the rolling hills of Pennsylvania and High Point Raceway, host of round four of the Lucas Oil Pro Motocross Championship, and what looks to be a perfect day. We typically see rain at some point—or even during race day—leading into High Point, but that won’t be the case today. It’s currently in the low 60s and sunny, with highs only expected to reach the mid-80s today.

Monster Energy Kawasaki’s Eli Tomac hopes to continue his perfect start to the season following the off week. It’s been since 2008, when James Stewart reeled off six straight moto wins, since a rider has won six straight motos to begin the season.

Who can stop him? Let’s begin with Ken Roczen.

Roczen didn’t expect to be this strong this early after missing the better part of two years due to injury, but the two-time 450 champion is slowly building, and nearly stopped Tomac’s perfect streak in Thunder Valley two weeks ago. A 2-2 day two weeks ago saw Roczen reach the overall podium for the first time in 2018, and he said earlier this year that he was hoping to be closer to his old self around High Point. Another spoiler could be Marvin Musquin. Currently second in points, Musquin has always performed well at High Point—he won here twice in the 250 Class. And keep an eye on Blake Baggett, the winner here a year ago.

In the 250 Class, the big storyline is the loss of defending champion Zach Osborne, who is out for the season due to a shoulder injury suffered in a first turn crash in the second moto at Thunder Valley. Osborne’s injury opens the door for two-time 250 champion Jeremy Martin. The GEICO Honda rider enters High Point with the red plate, an honor he hasn’t held since winning his second title in 2015.

High Point will welcome some familiar faces back to the mix. In the 250 Class, Dylan Ferrandis (Monster Energy/Yamalube/Star Racing Yamaha), Cameron McAdoo (GEICO Honda), and Mitchell Harrison (Rockstar Energy Husqavarna) will all make their 2018 debut today. We’ll also see familiar faces in new places, as Phil Nicoletti makes his debut with Rockstar Energy Husqvarna in the 450 Class, and Justin Hill will make his 450 debut with Autotrader/Yoshimura Suzuki.

Practice is underway, so stay tuned for a full report. Motos begin at 1:00 p.m. EDT on MAV-TV and the NBC Sports Gold app. NBC will have coverage of the second 450 moto, with NBC Sports Network airing the second 250 moto at 4:00 p.m. EDT.

Blake Baggett was on fire in the first 450 practice session. With a fast lap of 1:57.324, Baggett holds the top spot by more than a second over second place Marvin Musquin, and more than two seconds over Eli Tomac in third.

It seems Blake Baggett and the Rocky Mountain ATV/MC-WPS-KTM figured something out during the off week. In the second timed 450 session, Baggett and points leader Eli Tomac traded blows, with Baggett landing the final knockout, dropping a 1:55.307 on lap six to capture the fastest qualifying time by more than a second over Tomac.

Marvin Musquin was also in the 1:56s, finishing third with a 1:56.570. Musquin set his fastest lap on lap 7. Justin Barcia was fourth, but nearly two seconds off the pace of Musquin.

Aaron Plessinger was not far off the pace in third. He put in a 1:59.243 to beat out teammate Justin Cooper.

Austin Forkner was fifth, followed by Dylan Ferrandis, who is back racing for the first time since Atlanta Supercross. RJ Hampshire, who was fastest in the first session, was seventh. Chase Sexton, Alex Martin and Enzo Lopes rounded out the top ten.

The streak is over. Marvin Musquin has ended Eli Tomac’s six moto win streak in the first moto at the High Point National.

The drama began early. On the start, Ken Roczen got his rear wheel clipped by another rider which caused a huge first turn pileup. Roczen, Blake Baggett, Phil Nicoletti, Weston Peick, Henry Miller, and more were all collected in the crash.

Tomac grabbed the holeshot over Musquin and Justin Barcia. He opened a four second gap early on Barica, who made a daring pass on Musquin to take over second, and it appeared that would be all the room he needed to secure a seventh straight moto victory.

With Tomac out front building an early lead, Musquin was catching fire. On lap 4, he made his move around Barcia for second and began to plot his course of action against Tomac. On lap 6, Musquin was 5.5 seconds back of the lead, but he slowly began to slice away. By lap nine, the deficit was just 2.3 seconds. Two laps later it was less than a second.

With Musquin hanging all over the back of Tomac, he finally made his move on lap 11, passing Tomac around the outside of an uphill. Tomac tried to put up a fight, but Musquin was never challenged again and went on to win the moto by 5.4 seconds.

Blake Baggett made it the furthest of those down in the first corner, as he worked all the way back to fifth. Justin Hill, in his 450 debut, was strong, taking a fourth-place finish. It’s the highest moto finish for Hill on the year, as he finished outside the top ten in all six 250 motos to start the season.

Ken Roczen made his way back to seventh behind Benny Bloss. Cody Cooper, who was running inside the top five early, finished eighth, with Weston Peick, and Kyle Cunningham rounding out the top ten.

Well, this one was over pretty much when it started. Justin Cooper came away with the moto one holeshot, but Aaron Plessinger jumped into the lead on the opening lap and never looked back.

On the start, Jeremy Martin filled in behind Plessinger, and his big brother, Alex, was also in the lead group before a crash took him out of contention.

As Plessinger began to open a gap up front, Martin was trying anything and everything to get around the rookie, Cooper. It was a battle of youth vs. experience, and one the rookie won for a long time. Every attempt Martin made was slammed shut by Cooper. It took all the way until lap nine for Martin to move into second. By that time, Plessinger had already built a more than ten second lead. Plessinger cruised down the stretch to capture his third moto win of the year.

Martin finished second, 7.6 seconds back of Plessinger. Cooper took third over Austin Forkner and Jordon Smith. Joey Savatgy, RJ Hampshire, Dylan Ferrandis, Shane McElrath, and Chase Sexton rounded out the top ten. Alex Martin made it all the way back to 12th.

Garrett Marchbanks went down hard in the rollers late in the race and was holding his left knee. We’ll try and get an update as soon as possible.

If you didn’t watch the second moto from High Point, STOP READING THIS RIGHT NOW and go watch it. The following words will not do this moto justice. Hands down, best moto of the year so far.

Ken Roczen grabbed the holeshot, with heavy hitters Marvin Musquin and Eli Tomac in tow. Tomac passed Musquin and Roczen in one swoop, but Roczen was able to fight back and retook the lead. Roczen made a mistake and went off the track shortly after, which allowed Tomac to retake the lead.

On lap 6, Musquin moved into second, and began to cut into Tomac’s lead. By lap 10, it was just 1.8 seconds. From there, it was an amazing battle to the finish. On lap 15 of 18, Musquin was within a second and trying everything to get into the lead, but Tomac shut the door at every opportunity.

On the final lap, Musquin had a huge save which keep him close and he tried one last attempt coming back up the hill. The two were side-by-side, but Tomac shut the door again and held on for the moto win by 1.7 seconds. His 2-1 was also enough for the overall.

Ken Roczen finish third, more than a minute down from the lead group. Weston Peick and Justin Barcia rounded out the top five.

So………… That got crazy. What looked like a runaway moto win for GEICO Honda’s Jeremy Martin turned sour around the midway point in the moto, when he suffered a mechanical. At the time, Martin had a 12-second gap (!) on second place. It brings back haunting memories of 2016, when with Yamalube/Star Racing Yamaha, Martin’s bike blew up at High Point, costing him valuable championship points.

For a second straight moto, it was rookie Justin Cooper out front early. This time around, Martin wasted no time going after the youngster, passing him on the opening lap. Martin built his lead to 4.2 seconds on Austin Forkner, who had moved into second. Cooper would repass Forkner on lap 4, but later lost the spot again.

Meanwhile, first moto winner Aaron Plessinger was off to a slow start, sitting around fifth in the early going. Then he got hot. He quickly made his way through the field and took over the lead when Martin suffered a mechanical.

A huge battle broke out for second with Cooper, Forkner, Ferrandis and Alex Martin all in the mix. Martin lost huge ground when he crashed, but he was able to regroup and finished the moto fifth. Cooper also lost touch of the battle for second, as Ferrandis and Forkner battle all the way to the checkers, with Forkner just edging out the Frenchman.

Plessinger cruised it home for a perfect 1-1 day and will enter Muddy Creek next weekend with the red plate. Forkner held off Ferrandis for second, with Cooper and Alex Martin rounding out the top five.