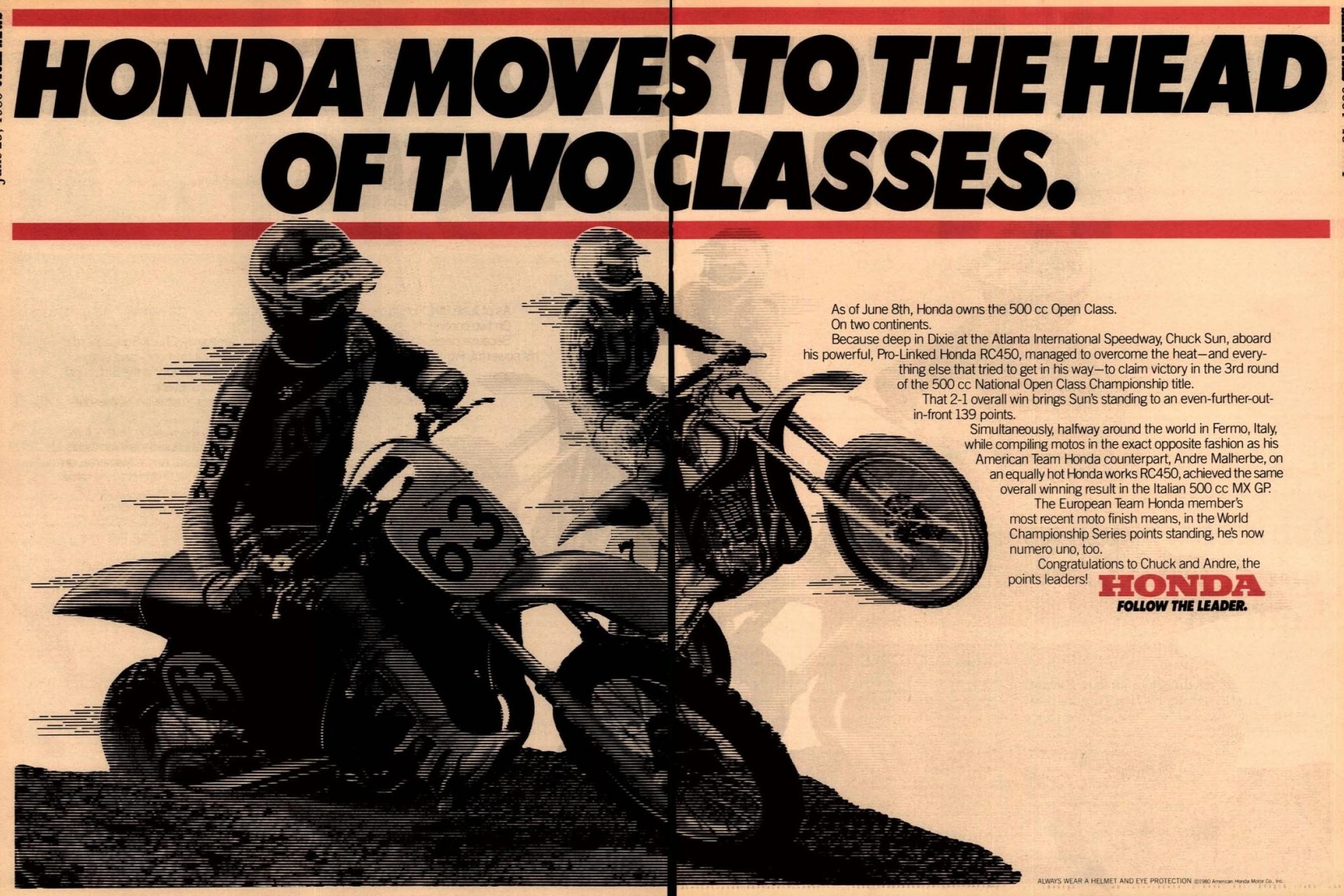 On This Day in Moto June 8

Yamaha factory rider "Jammin'" Jimmy Weinert won the AMA 500 National at Baldwin Motocross Park in Baldwin, Kansas. Kawasaki's Gary Semics finished second, with Husqvarna's Kent Howerton third. This was the third and final year of an AMA National at this Kansas track, which would also host the first AMA Amateur National in the fall of 1975—with the 125 Class won by a kid from Illinois named Mark Barnett.

Road Atlanta hosted a 250/500 National, and the big winners were soon-to-be-champions Kent Howerton in the 250 Class and Chuck Sun in the 500s. Suzuki's Howerton topped Yamaha's Mike "Too Tall" Bell and Kawasaki's Warren Reid.

The Freestone National in Texas featured another 1-1 romp by Kawasaki's James Stewart, who would win all 24 motos in 2008 on his way to one of only three perfect seasons in American motocross history. 2008 was also the last year someone started Lucas Oil Pro Motocross with six straight moto wins, just like Eli Tomac has done thus far in 2018. Makita Suzuki's Mike Alessi would go 2-2 for second, Team Honda's Andrew Short 3-6 for third.

In the Lites Class, Ryan Villopoto, Ryan Dungey, Austin Stroupe, and Jake Weimer would finish 1-2-3-4, respectively, in both motos. Villopoto, the reigning class champion on a Monster Energy/Pro Circuit Kawasaki, was looking for his third straight title.

Team Honda's Ricky Carmichael once again dominated the Southwick National. This was the last time a two-stroke 250cc motorcycle would win the 250 Class at what's now known as The Wick 338. All told, in 11 career visits, Carmichael would win at Southwick ten times—a record haul for any track on the AMA circuit. Local legend John Dowd (the one man who beat RC at Southwick back in 1998 on 125s) finished second on a KTM, with Honda rider Kevin Windham third.

In a crazy 125 Class, Yamaha of Troy's Craig Anderson of Australia got the one and only AMA National win of his career over fellow Aussie Michael Byrne of the Factory Connection/Amsoil Honda team. Brock Sellards, also a YOT rider, finished third overall with 9-2 moto finishes.

As far as the championship contenders went, Red Bull KTM's Ryan Hughes would somehow finish the race with a hairline fracture to his leg early in the first moto—in typical Ryno fashion, he taped the leg up and rode the second moto, too! Hughes gutted out 10-16 finishes to minimize the damage. Pro Circuit Kawasaki's Mike Brown and Red Bull KTM's Grant Langston would crash together in the first turn of the first moto, entangling their motorcycles. By the time they got going, they were far behind everyone. Langston would reach 16th, Brown only 22nd—he was riding without the left grip that was ripped off in the crash. Both Brown and Langston would go down in the second moto as well, though Brown had the better comeback ride this time, reaching third. Langston would end up seventh.

This was the last 125 race anyone other than James Stewart would win to end the 2003 season. The defending champion, on the sidelines since breaking his collarbone at the season-ending Las Vegas SX, would be coming back at the next round at Budds Creek.