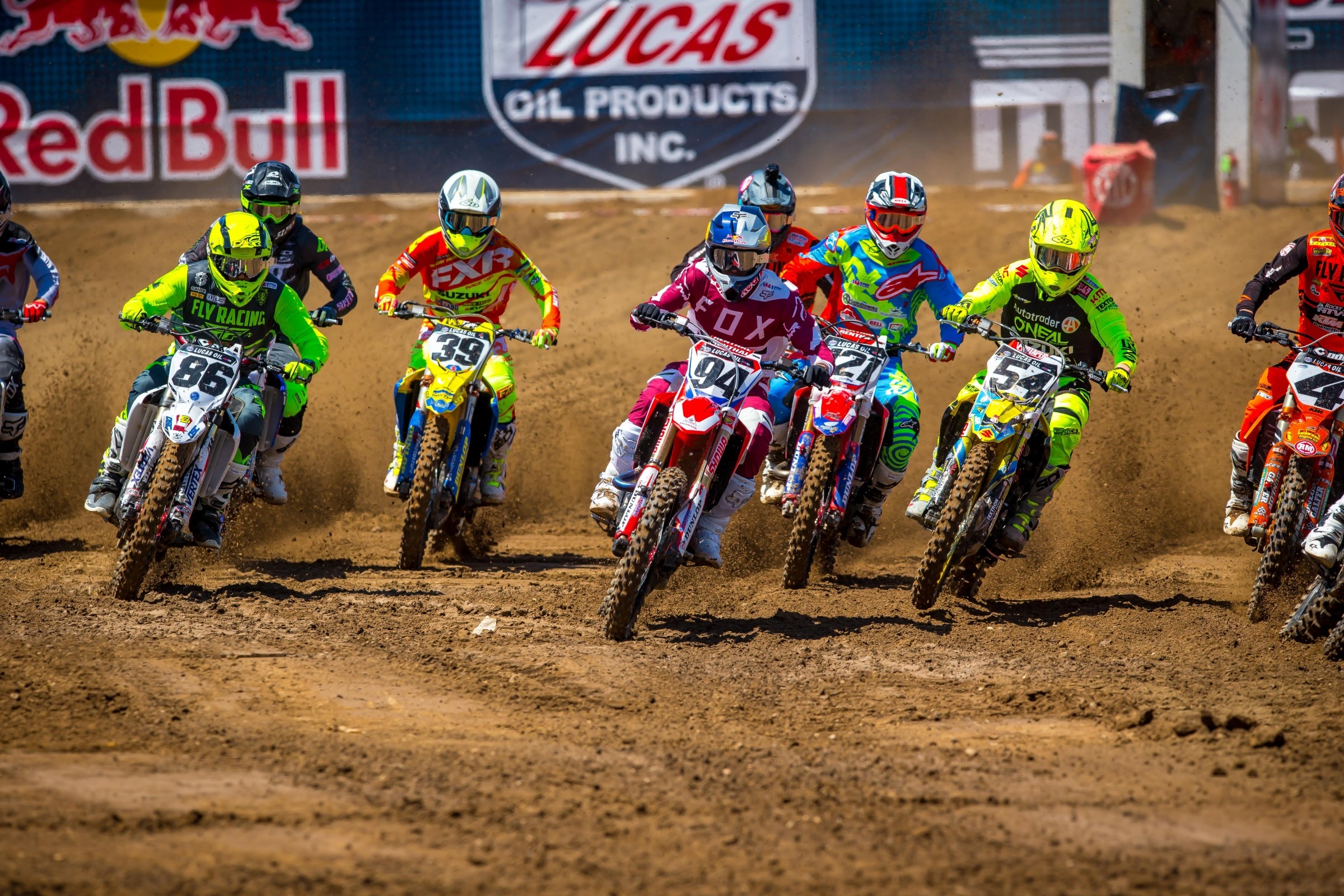 Straight moto wins for defending 250 Class champion Zach Osborne dating back to last year. Osborne began his title defense with a 1-1 at Hangtown.

Straight second-place finishes for Red Bull KTM’s Marvin Musquin dating back to last year. Musquin began 2018 the same way he ended 2017: with 2-2 finishes in the 450 Class.

Eli Tomac’s fastest lap in the first 450 moto on Saturday. Marvin Musquin was second-fastest with a 2:20.519. Tomac was the only rider in the 2:19s all weekend.

Finishes for Blake Baggett on Saturday. He went 6-8 at Hangtown last year.

Finishes for Justin Barcia on Saturday. He went 11-5 at Hangtown last year.

“It was great. A couple of weeks ago, it was almost hard to actually make the decision. It was like, “Hey, is it worth it going here?” My hand was nowhere near being able to race a whole race at pace. We just came here and we were wingin’ it, really. It’s good to be back, and I think I showed I’ve got the speed. All in all, it’s just not having enough time on the bike. It’s been a year and a half since I’ve ridden outdoors, and it’s definitely a different animal. We’re searching a little bit with the bike, but I have a lot of faith in the team and we have a good plan moving forward from here. I think in the coming weekends my body is going to get back used to the intensity of the longer motos, and obviously I’m going to work during the week to get it all back. It’s not going to happen tomorrow, but I had a lot of fun today. I had a big smile on my face just in practice this morning.”

Read the full interview with Roczen.

“I’m happy to get out of Hangtown healthy and to start building from here. The first race of the season is always nice to get out of the way. I felt pretty good all day, qualifying fourth in practice. I pulled the holeshot in the first moto and led some laps before getting passed by a couple guys, then crashing. I got up but was in ninth, then passed for eighth. In the second moto, [Blake] Baggett and I got together out of the gate, so it ruined my start. I started mid-pack and worked my way up. I ended up going off the track and tipping over in that one. It was kind of a mess, but luckily I was able to make my way up to eighth again and get out of there inside the top ten overall. I know where I stand in that class so I’m happy with my speed and fitness; I just need to stop making little mistakes.”

“Hangtown wasn’t ripped as deep as it usually is, but it still got rough. It was hard pack in some areas. I felt really good in the first moto. I got off to a slow start, but found a good flow and passed up to fifth place. I’ve been dealing with a hand issue, and it really bothered me. At one point my hand was going numb. I went into the second moto dealing with a lot of pain, but I stuck it out and did what I could. My hand started bothering me again at about the 15-minute mark, but I fought through it. We made a suspension change after the first moto to get the fork to hold up, but we went a bit too extreme, and that resulted in the forks being too stiff. That was okay, though, because we figured out what works and what doesn’t. I’m looking forward to Glen Helen.”

“The weekend was okay, given the amount of time I had on the bike. I had stomach issues all day, which played into my performance. Overall, being able to rip a holeshot in the second moto and running up front for a while was nice. I couldn’t hold the pace due to my stomach problems, but it was a decent start to the Nationals. We made good changes with the suspension and chassis, and it will pay off.”

Good showings all around for a number of rookies this weekend. Monster Energy/Yamalube/Star Racing Yamaha’s Justin Cooper, who is still technically a rookie despite racing the final three rounds last year, led four laps in the first 250 moto before dropping back to fifth. He finished fifth overall after taking ninth in moto two.

“Solid day yesterday, but lacked a little bit of intensity,” he wrote on Instagram. “But all in all, a lot of positives to take away from yesterday. Lot of valuable experience leading and battling with those guys. Just wanted to stay safe yesterday and let things play out; it’s a long season and I’m ready for it. It’s been a little bit since I’ve raced, so it’s a great start to the season and I’ll take P5 O/A, but I’ve definitely got more fight in me.”

Monster Energy/Pro Circuit Kawasaki’s Garrett Marchbanks told our Jason Weigandt prior to Hangtown that he expected to struggle in the first moto due to nerves, and that he would be better in moto two. And… the youngster pretty much nailed it on the head. He finished 12th in the first moto before fighting back to take sixth in moto two.

“I am really happy that I was able to make improvements in the second moto,” Marchbanks said in a team statement. “I’m pumped to finish tenth [overall]. I didn’t know what to expect other than I felt good coming into the race. We’ve got some work to do and I am really looking forward to Glen Helen.”

Brazilian Enzo Lopes made his debut with Autotrader/Yoshimura Suzuki as a fill in for the injured Jimmy Decotis. Lopes rode to 13-15 finishes for 15th overall.

“My first National was a really cool experience,” he said in a team press release. “The way I look at is that we still have plenty of motos to go. I rode pretty tight in the first timed practice because of nerves. I felt better in the second timed practice and ended up 11th-fastest, which was pretty good. I had a decent start in the first moto and battled with some established riders. That moto I ended up 13th, which was good. I had a better start in the second moto and was running in 11th place, but I crashed and fell back to 17th. That crash slowed me up, and I was only able to get back to 15th place. I am happy to get my first National out of the way, and I can’t wait for Glen Helen.”

Rockstar Energy Husqvarna’s Jordan Bailey also said he was nervous for his first National. The Florida native went 19-19 for 19th overall. “I started off okay in the first practice,” Bailey said in a statement. “I had a couple mistakes, but I’m just trying to learn every time I’m on the track. I got a good start in the first moto and was just nervous being a rookie. I got another good start in the second race, but there was a big pileup and I got caught up in it. I charged as hard as I could and I’ll move on to Glen Helen, keep learning, and will get better every weekend."

CycleTrader.com/Rock River Yamaha’s Brandon Hartranft, who was the surprise rookie of Monster Energy Supercross, was solid in his first National, going 14-12 for 14th overall in the 250 Class.

And, finally, Jake Masterpool jumped right into the deep end, racing the 450 Class in his first pro race. The Texas native went 14-14 for 14th overall. Here is some Garmin footage of him at press day:

Monster Energy/Pro Circuit Kawasaki’s Austin Forkner was forced to pull out of the second 250 moto after he “popped some ribs out” when his holeshot device released out of the gate and slammed into his chest. Forkner is still expected to race this weekend at Glen Helen.

Hangtown 2k18. First moto was solid all around for my first race back I thought I rode good. Second moto my holeshot device released out of the gate and the bars came up and slammed my chest and kinda popped some ribs out of place which made it hard to breath and then they just started to hurt more and more as the moto went on. Didn’t wanna risk crashing again and really wasn’t worth it since I was like mid pack. Bummer on that one but we’ll be back for Glen Helen. #team35

Rockstar Energy Husqvarna’s Mitchell Harrison was nowhere to be found at Hangtown. Harrison apparently sustained a minor AC separation in a practice crash prior to the event and was unable to line up on Saturday. No timetable has been announced on a return.

Unfortunately was not able to ride at Hangtown this weekend due to a practice crash last Friday. I have a minor AC separation, and thankfully I have a great team behind me to support me until im ready to come back and give it 100% @rockstarhusky @husqvarnamotorcyclesusa @rockstarenergy ? @shepherdphotos

As we reported last week, Monster Energy/Yamalube/Star Racing Yamaha’s Dylan Ferrandis missed the opener due to a broken arm sustained in Monster Energy Supercross. Over the weekend, Ferrandis wrote on Instagram that he has been cleared to begin riding and hopes to be back for round three or four.

Unfortunately I will not ride the round 1 of @promotocross because of my arm injury, the good thing is I have the green light to restart to ride now so I hope to be back for round 3 or 4 ????.

Hayden Mellross’ debut with CycleTrader.com/Rock River Yamaha ended early after the Australian crashed late in the first moto and injured his shoulder. He was a scratch for moto two. He’ll undergo further evaluation today.

Well Hangtown wasn’t the outcome I wanted. I was feeling great on the bike all morning and qualified 14th with some good times. Unfortunately when it came race time I tightened up and was making many mistakes. I ended up having a pretty big crash late in the race which ended my day. I will be seeing the doctor tomorrow to see what we are dealing with. Hopefully everything checks out good but I’ll keep you guys updated when I know more. Thank you the the entire @cycletraderrockriver team for being so supportive. ???? . . @cycletraderrockriver @enzo_racing @officialmooseracing @rockriverpowersports @roostmx @51fiftyenergy @yamahamotorusa @yoshimura_rd @ridedunlop @bikebld @skullcandyoz @hammernutrition @mxstore @ethika . . #supercross #sx #mx #motocross #motorcycle #motorbike #motorsport #moto #dirtbike #bike #bikelife #track #fit #athlete #photoshoot #photography #malemodel #fitness #fitspo

Taft Moves Up and On

There is quite a bit of mystery surrounding Bradley Taft’s exit from the CycleTrader.com/Rock River Yamaha team following supercross. Lots of rumors, but no real concrete answers.

Taft made the last-minute decision to race Hangtown anyway. He said he bought a Husqvarna on Tuesday, rode Wednesday and Thursday, then raced Saturday. In his 450 debut, Taft rode to a strong moto to capture tenth overall.

In 14 career 250 races, Taft finished inside the top ten once: a tenth at Ironman last year.

Made a last minute decision to go race Hangtown. Bought a bike Tuesday. Rode it Wednesday and Thursday. The guys @fmf73 and @twisteddevelopmentracing we’re nice enough to give me an exhaust and an ignition other than that the bike was bone stock. Was able to go 11-10 for 10th OA. Really happy with the weekend and hope to get better and better the more time i get on the new bike. Thank you everyone that made this possible!