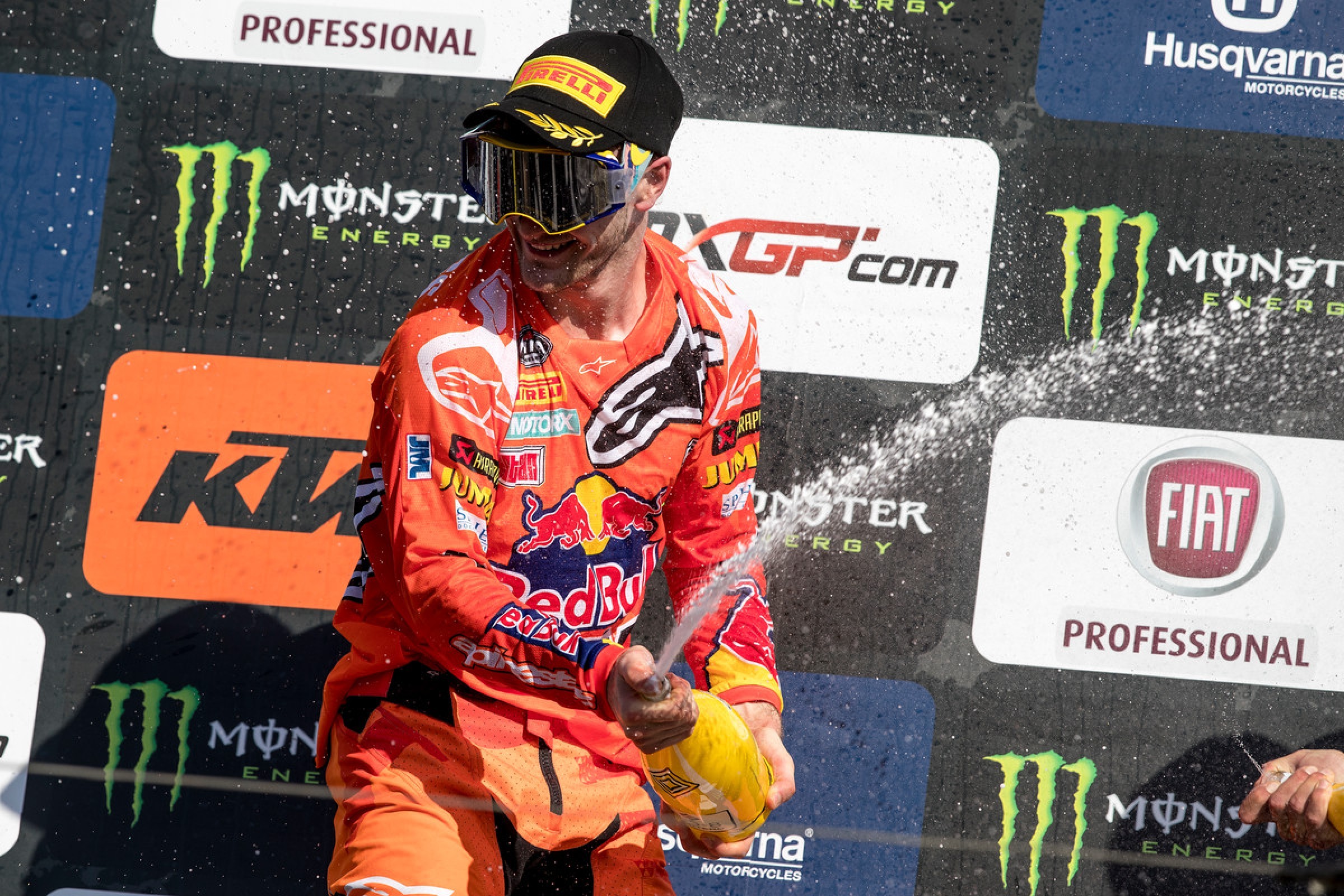 GP Report 5 Things We Learned at the MXGP of Germany

From the east of Europe to the old east of Germany, MXGP landed in Teutschenthal for round eight and is rapidly gaining credit back for suffering one of the coldest Grand Prix in living memory at Valkenswaard back in March with the second sun-blessed meeting in a week. It was a race where Jeffrey Herlings continued to burn as bright as the sun itself, and Red Bull KTM locked in their sixth meeting of the year so far.

There was a sense of inevitability when the orange #84 rounded the first corner in contention for both moto holeshots. Jeffrey Herlings’ numbers in the 2018 MXGP series are starting to be as emphatic as his race-winning times. The Dutchman now has a 48-point lead over Tony Cairoli (the Sicilian’s 6-5 was a season low) thanks to six wins from eight (five of those being 1-1s) a 100-percent podium record, 12 from 16 moto wins, and six qualification heat victories. Herlings has yet to register a race result lower than third from the 16 outings so far.

His dominance in Latvia last week was understandable: It was the scene of his maiden win on the Red Bull KTM 450 SX-F in 2017, and the sandy terrain is like water to a duck. Teutschenthal should have been a lot harder; the 23-year-old had won only twice there since 2010. After his latest sweep, even Herlings was prompted to admit it had been a bit of a “dream weekend.”

Despite the best efforts to soak and work over some of the Talkessel soil and provide more line choice, the majority of riders struggled to make any headway beyond their opening lap positions. Herlings, Tim Gajser, and Gautier Paulin all went 1-1, 2-2, 3-3. It was fairly static stuff, and not much footage will make it into an end-of-season highlights reel.

“Today was a very strange race; normally it develops a bit during the moto, but it seemed like if you crossed the finish line at the end of the first lap in the top five, then you stayed there,” lamented a clearly irked Cairoli. “Jeffrey had two good starts and he was free to make a good speed and rhythm. When you are in the pack, it is like a war: On this track, everyone was cutting lines and ruts and trying to pass, and there were crashes.”

Herlings’ brilliance and intensity was beyond doubt. His level of performance started to remind MXGP fans of his last term in MX2 in 2016, where he went 1-1 for 11 from 12 Grands Prix (the other was a 1-2). In 2014 he also racked up nine 1-1s in a row. There was even talk on Sunday that this could be opening phases of a new era in the premier class of motocross. Speaking about his form, Herlings gave some insight to the cost, his words indicating that there was a hefty toll to pay for the perfectionism.

“I feel like I leave nothing on the table anywhere at the moment,” he said on Saturday. “Currently I eat, sleep, and breathe motocross, and it is hard for myself and on my body, and I don't know how many years I’ll be able to do that. I basically watch every single thing every day to be able to perform at the weekend, and it is demanding.”

Sunday evening, he was moved to describe his 450 SX-F as “perfect” and wouldn’t alter the motorcycle, the final piece of the jigsaw coming with the factory-made start device in Portugal four rounds ago that has made his potency even more untouchable. The rest of the MXGP pack can only hope a mistake or technical glitch lies somewhere on the horizon.

There are some things that the MSC Teutschenthal club get right. They have a timed honored system of organization based around a fairly basic and rudimentary facility. There is lasting passion and acute knowledge when it comes to the complicated intricacies of event construction and even openness toward modification of their old racing surface, as evidenced by the collaboration with Rui Gonçalves and his crew and the importation of new soil to try and mix up some of the ancient hard-pack. While a very decent crowd enjoyed the cloudless sky on Sunday and proved that MXGP is still a popular draw in this region of the country, there are elements of this Grand Prix that are wearing thin. The bizarre location of the camping areas with such close proximity to the space for the riders and athletes—thus virtually ensuring a restless night—is thoughtless. Kevin Strijbos even took to social media to air his sleepy grievances.

Not sure if we were on a @mxgp track this night or on a party festival?! Its unrespectfull towards the riders i think. If you wanna party, thats fine but go to the city or put the tent and camping a few km away.

The first time the track hosted a Grand Prix was in the mid-seventies, and the internet speed was probably better then than it has been for the last few editions of MXGP in Talkessel. The fact that the worldwide web is credited as being invented in 1989 illustrates the great frustration that the press, Youthstream, and anybody with a crumb of interest in seeing their interests in MXGP exposed had to endure. Teutschenthal had the crowds and last weekend basked in the sun, but it is rapidly in danger of diminishing if the club don't try to join the second decade of the 21st century.

Jorge Prado is the real deal. The 17-year-old can win Grands Prix with one hand in the sand and has added resilience, improved fitness, and extra capabilities on hard pack to his flowering bloom of talent for his second Grand Prix year. For the fourth time in eight rounds, the Red Bull KTM duel in MX2 has swung between Pauls Jonass and the Spaniard. At this stage, it would be foolish to dismiss the very omnipotent presence of Claudio De Carli in the transformation, and slightly harder edge to Jorge’s performances; the Italian team manager is molding his second Tony Cairoli, and the combination—just eight months old—is looking formidable. For the second weekend in a row, Prado evaluated race day and produced the touch of class needed to prevail in the second moto. He did not make further gain on Jonass in the championship standings, and the gap remains at a paltry 22 points, but Prado is enforcing his case for that holeshot victory scenario that is becoming more and more frequent.

In Germany, his fifth moto checkered flag and third GP triumph of the year (just one more will see him tie with Jonathan Barragan for Grand Prix wins, and a further set of spoils will already see him pronounced as the most successful Spaniard in world championship history) was also De Carli’s 100th in FIM competition. There are even rumors that the once-fierce ambition to transfer to supercross as soon as realistically possible have dimmed in the interests of making a sizeable MX2 impact for the foreseeable.

Finally, Rockstar Energy Iceone Husqvarna’s Gautier Paulin is starting to join the party. The Frenchman is a stylish fellow, but even an arrival this late is a little too cool. Herlings and Paulin graced both the Latvian and the German podiums in the space of seven days, and the Motocross of Nations star claims that major weak point of his season so far—those infuriating starts—seem to have been solved. Paulin had both holeshots at Teutschenthal, and his ability shone through. Paulin had nothing for his Dutch rival, but was adept at keeping pace with Tim Gajser and floated to 3-3 while keeping the HRC man honest.

Tony Cairoli has been trying to rally the spirits of his peers through gentle provocation in recent weeks to join the KTM sparring sessions, and he knows he needs backup firepower to make Herlings’ job as hard as possible. Tony was truly fed up at missing the top three for the first time in 2018 and said, “We’ll have to look at what happened,” when it came to a double miscue from the start gate. The upturn in speed from both Tim Gajser (running at about 80 percent fitness, according to HRC sources, and likely to have another operation on his jaw as soon as the season ends to remove a plate) and Paulin will offer some encouragement that Herlings cannot possibly have each weekend so easy and free, such was his margin that the championship leader could not comment on whether the track was hard for passing.

“Apart from some lapped riders, then I don't really know what it was like to overtake,” he had to admit.

A free weekend will give respite and a dose of recuperation for those who already need it, with Monster Energy Yamaha particularly hit in Germany. Jeremy Van Horebeek dislocated a shoulder and Romain Febvre—who came into the meeting with a painful right wrist—was also limping out with a sore left foot after a heavy fall three laps before the end of the second moto. The team were amazed that the Frenchman could reach the checkered flag in seventh with a severely damaged YZ450F—bent bars, broken wheel spokes, and the whole package of rider and motorcycle looking and feeling decidedly used.

Rockstar Energy Husqvarna’s Thomas Covington is still trying to find some form and feeling after his knee injury, but starts were a limiting factor—particularly the second moto, when he was left temporarily stranded on the inside wall of the first turn and was deep in the pack. He picked up just 12 points. A run-in between Latvian GP winner Thomas Kjer Olsen and highly rated Australian Jed Beaton in the first moto took both down, and the Dane was out of contention with the KTMs. Bike It DRT Kawasaki’s Darian Sanayei was back in the paddock for the first time since round four and commented that he has been trying to build up strength in his ACL-less knee to consider more Grand Prix appearances this season. He plans to take to the start gate at Matterley Basin in two weeks time for his team’s home round, but admitted that the possibility of surgery was also looking strong.