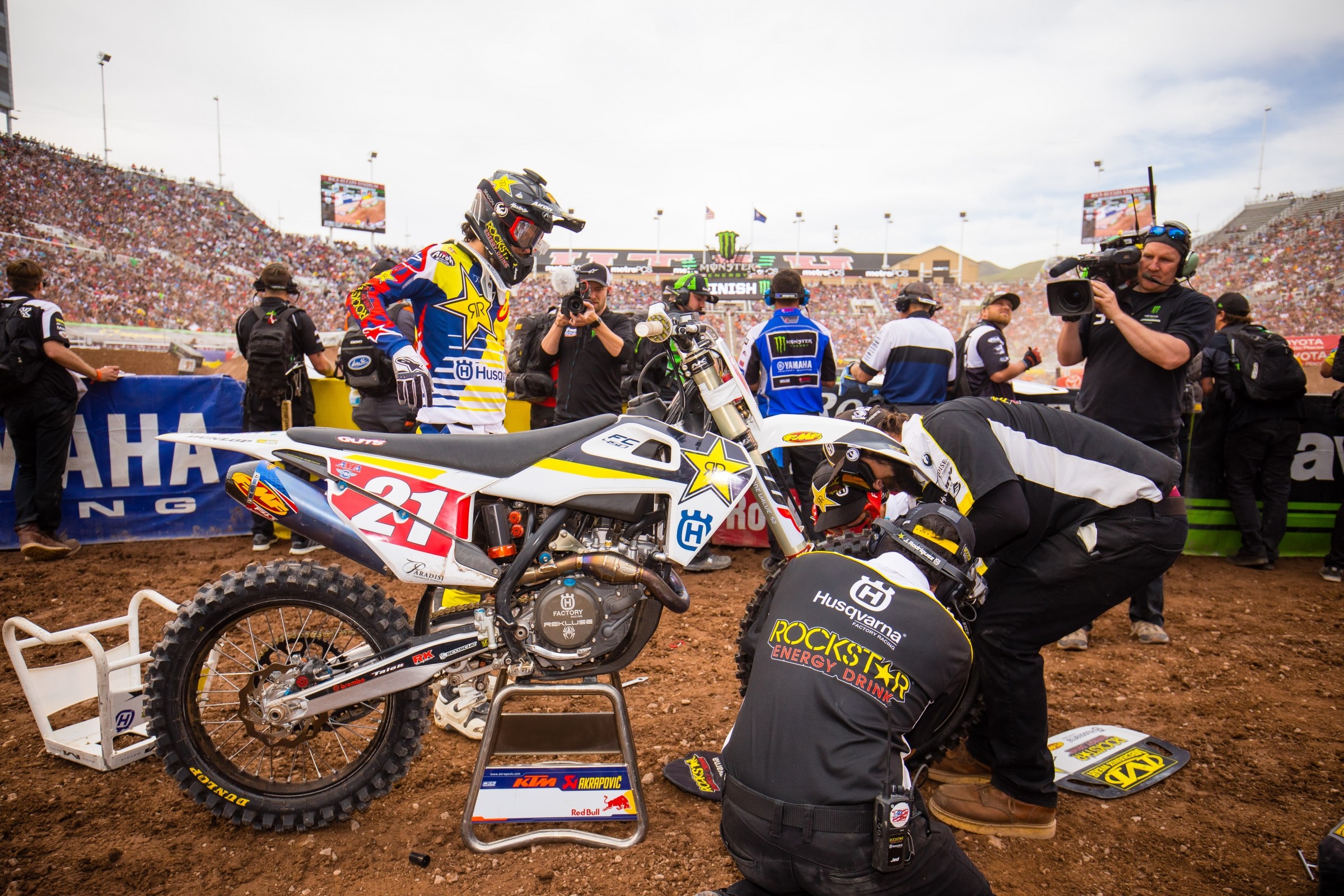 The champagne was on the proverbial ice. The championship T-shirts were printed and hidden in backpacks. The official was down on the track, the #1 plate in hand. It was all supposed to go down in a little over 20 laps: Rockstar Husqvarna’s Jason Anderson was going to win the 2018 Monster Energy AMA Supercross Championship at Salt Lake City’s Rice-Eccles Stadium last Saturday afternoon.

And then all hell broke loose in the first turn for #21, who found himself in 22nd with a busted front wheel. Just like that, the champagne and T-shirts and #1 plate all disappeared, and Anderson was left to gut out a 17th-place finish to minimize the damage from his first disastrous race of the series.

Anderson still has a very good shot at wrapping this all up on Saturday night in Vegas, but the events of SLC—fumbling away a championship shot with a disastrous race—got us to thinking about other times this happened (and sometimes without a second chance to fix the mishap). The following is just a sampling of some of those very bad days….

In 1992, Kawasaki’s Mike LaRocco was well on his way to the 125cc National Championship, holding a massive lead with just two races to go over Yamaha’s Jeff Emig. But at Steel City, LaRocco suffered a pair of DNFs, allowing Emig to make up 47 points with his 1-2 moto finishes. The next week was the final round at Budds Creek, and while Emig was winning both motos, LaRocco bent the shift on his KX125 on a pile of tires lining the inside of a turn, costing him the title.

Also in 1992, and maybe most famously of all, was Damon Bradshaw’s meltdown at the Los Angeles Coliseum finale, where he simply could not get moving forward in the main event. Team Honda’s Jeff Stanton won, and Bradshaw could only manage fifth, even with help from his Yamaha teammate Emig. Damon lost the title by three points.

In 1984, Corrado Maddii was about to become Italy's first FIM Motocross World Champion. He was 30 points ahead of every rider in the standings going into the finale in Luxembourg, but then, in a freak accident, he had his leg broken by another rider who was practicing starts on Saturday, rendering him unable to race Sunday’s GP. The next day, Suzuki's Michele Rinaldi went 1-4 to score 33 points, putting him three in front of Maddii and making him Italy’s first MX World Champion.

Kawasaki’s James Stewart was basically handed the 2007 AMA Motocross Championship by Ricky Carmichael, who was retiring and only racing 6 of the 12 rounds. First, Stewart crashed out of Unadilla in practice, suffering a concussion. Then he tore up his knee at Washougal and missed the last three rounds. Yamaha’s Grant Langston won all three and became the 2007 AMA Motocross Champion.

And speaking of Langston, the universe kind of owed him one anyway after what happened in 2001 at Steel City. The KTM rider was two laps away from the AMA 125 National Championship when his rear wheel shattered at the end of the second moto at Steel City, handing the title to Pro Circuit Kawasaki rider Mike Brown.

It should be mentioned that, earlier in that series, Suzuki’s Travis Pastrana had a massive points lead and was running away with the second moto at Unadilla when, on the last lap, he crashed violently on a fast straight, knocking himself out. Travis, then in only his second year as a pro, never won another professional race.

In 2014, KTM’s Jeffrey Herlings won 22 of the first 24 motos of the MX2 World Championship and was almost certainly going to win the title. But in August, he entered a charity race on a minicycle and broke his femur! There were still four races to go, and French KTM rider Jordi Tixier had a long shot at catching Herlings on the points table. When it got down to the last round, in Mexico, Herlings went so far as to try to race with a rod in his femur, but it was too much. Tixier ended up winning the title by four points.

Christophe Pourcel has had two AMA championships slip through his hands at the very end. In 2009, he was ahead of Rockstar/Makita Suzuki rider Ryan Dungey by 13 points with two rounds to go when his bike broke in the first moto at Southwick; he then crashed in the first turn in the second moto, scoring just 10 points on the day—30 fewer than Dungey did with 2-4 finishes. Pourcel swept both motos of the Steel City finale, but it wasn’t nearly enough to make up for his disastrous day at Southwick.

The next year in 2010, Pourcel went into the 250 MX finale at Pala Raceway with a seven-point lead on Trey Canard. Pourcel was doing exactly what he had to do in the first moto when he caught a ledge wrong, crashed, and broke his arm. Trey Canard won that title.

Pourcel is not the only Frenchman to have such bad luck here. In 1990, Jean-Michel Bayle was well out in front in the 125 Nationals when he crashed in the whoops at Washougal and broke his arm. But he would have 1991 to seek his revenge….

Way back in 1977, Bob “Hurricane” Hannah had a direct shot at the AMA 500cc National Championship. He was battling with his rival Marty Smith, and they went into the last round with equal shots at the title. Hannah holeshot and was winning the first moto when his throttle cable popped out after losing a small metal clip, causing him a DNF. In the second moto, Hannah twisted his ankle on the first lap but was still leading for a time, hoping Smith would DNF. Marty ended up fifth, though, and the injured Hannah slowed to seventh. Smith snatched the title by 24 points.

And, of course, there was disastrous day for Eli Tomac in East Rutherford, New Jersey, last year in 2017. The Monster Energy Kawasaki rider was on a roll, having dug himself out of an early hole to win six of seven races and take the points lead with just two rounds to go. He had all the momentum in his battle for the title with Red Bull KTM’s Ryan Dungey, only to crash at MetLife Stadium and struggle to get moving again. He finished eighth, while Dungey, with an assist from his teammate Marvin Musquin, ended up with the win and a manageable lead going into the Las Vegas finale, where he was able to put away his fourth and final title.

Finally, we have the disastrous end to the 2017 250SX East Region for Joey Savatgy. The Monster Energy/Pro Circuit Kawasaki rider entered East Rutherford with a six-point lead over second place Jordon Smith and 12 points over Zach Osborne. Savatgy was leading the race but was passed by Osborne. A few minutes after he lost the lead to Osborne, Savatgy went down in the second rhythm section and fell in between lanes. After getting his bike restarted, Savatgy re-entered the race in the next lane over from where he crashed, cutting off half of a rhythm section and half the whoops. The AMA penalized Savatgy five spots and he was moved from third to eighth.

He still went into the Las Vegas finale with a chance, down one point to Osborne and tied with Smith. After Smith crashed out and with Osborne down in the first turn, it looked like the title was Savatgy’s. But Osborne rode like a man possessed on the final laps, just as Savatgy found himself locking up and unable to charge. Osborne got Hayden Mellross on the last lap and got Savatgy within his sights. In the final whoop section and bowl turn of the race, Osborne unleashed everything he had, sending it through the whoops and into Savatgy’s side in the corner, smashing the Kawasaki rider to the ground, taking the seventh spot, and with it the title in a most remarkable ride after being buried and locked up in turn one.

Okay, now it’s your turn to name a few that you remember in the comments!